An NHS worker who sued her bosses for race discrimination after a colleague compared her to the Karate Kid character ‘Mr Miyagi’ when she killed a fly has lost her claim.

Narinderjeet Kaur Dhillon initially laughed off the comparison to the martial art master from the hit 1984 film, an employment tribunal heard.

Mr Miyagi, a fictional master of the martial art played by award-winning actor Pat Morita, has such quick reflexes he can catch and squash a fly in his fingers.

It was not until Ms Dhillon, who is Sikh, later saw the film on TV that she felt the comment was discriminatory because it compared her to an ‘old Chinese man’.

She then attempted to sue the NHS Trust at the tribunal for racism.

However, the panel rejected her claim after ruling she had made it too late and that it not discriminatory. 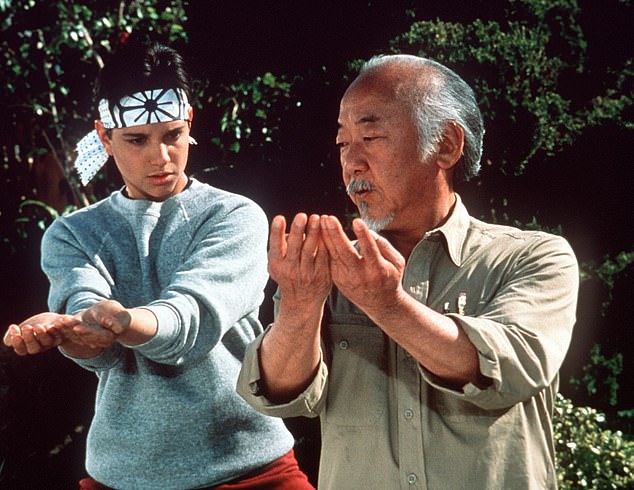 Narinderjeet Kaur Dhillon initially laughed off the comparison to the martial art master (right) from the hit 1984 film, an employment tribunal heard

The hearing, held in Leeds, heard the comment was made by trainer Karl Ward during a session at Leeds Teaching Hospital Trust, Yorkshire, in October 2017.

The panel heard that the remark was humorous and that everyone present, including herself, had treated it as a joke, and that she had only found it discriminative later on.

Ms Dhillon told the panel she officially complained about the comment in April 2018 saying ‘the other trainer said I was Mr Miyagi after I had squashed a fly’.

The hearing was told: ‘Ms Dhillon said that at a training session of 5th October 2017 one of the trainers, Karl Ward, had said to her ‘who do you think you are, the Karate Kid?’ ‘

She claimed the comment was discriminatory because ‘it compares her to an old Chinese man, and because there is a separate and distinct martial arts culture within her own Sikh tradition’.

The tribunal heard that at the time however, Ms Dhillon thought that the incident was ‘humorous’ and she had ‘treated it as a joke’.

The hearing was told that in the same year the NHS worker made an informal grievance about her manager complaining she had been ‘patronised and shouted’ at.

Her complaint was not upheld and the following month, in October, she was suspended due to an allegation of misconduct and poor performance.

Amongst other things, the tribunal was told she had turned up to late on 13 out of the 14 days in September.

The tribunal heard she was then investigated and sacked in November 2018 before going to the tribunal claiming her dismissal was linked to her grievance.

While the panel heard her complaint was inadequately investigated, it found this was a ‘genuine’ oversight and had nothing to do with the grievance.

In addition, her race claim about The Karate Kid comment, was found to be ‘extremely tenuous’.

Dismissing her claims, Employment Judge Philip Lancaster concluded: ‘There is no reasonable prospect of it being held that this comment was an act of direct discrimination, that is that it was made because of Ms Dhillon’s race, nor that it in fact subjected her to any detriment.

‘At the time her own perception was not in fact that this violated her dignity, or created an intimidating, hostile, degrading, humiliating or offensive environment for her.

‘The comment was clearly not purposed or intended to have such an effect and objectively nor would it be reasonable in the circumstances to find that it did.’

In the hit film, Mr Miyagi teaches teenage pupil Daniel LaRusso – played by Ralph Macchio – to help defend himself and compete in a tournament against his bullies.