The homeless sex worker, a missing link and the string of mystery Covid-19 cases: Melburnians who hired a prostitute in St Kilda are urged to get tested as authorities scramble to investigate new outbreak

A homeless sex worker in Melbourne has tested positive to Covid-19 as authorities rush to discover the source of a string of mystery infections.

Victoria recorded 24 new cases on Wednesday including six infectious in the community and four with no known links.

Health authorities have now turned their attention to the south-eastern suburb of St Kilda with 15 mystery cases having popped up in the area – with the only known link being geography.

Health minister Martin Foley confirmed one of the new cases was a sex worker from St Kilda as he urged anyone who hired a prostitute in the area to get tested.

‘I stress there is no evidence of transmission having occurred because of this person’s occupation,’ he said.

Health authorities still have no idea how the woman caught the virus.

Health authorities are working to determine if a homeless sex worker is the source of mystery infections in St Kilda, Melbourne (pictured Melbourne man walks in Southbank)

Covid-19 commander Jeroen Weimar claimed there was no evidence the sex worker was the missing link with the mystery cases in St Kilda and she is now in quarantine.

Another resident linked to the woman has also tested positive.

‘We are exceptionally concerned about what we don’t know yet in that area,’ he added.

He said areas of concern included Caulfield North where the infamous engagement party was held and Middle Park.

‘We have accountants, we have architects, we have a sex worker, we have members of the Orthodox Jewish community, [and] we have a pizza guy worked in a pizza shop in Glen Eira,’ Mr Weimar said.

‘It is a very broad and disparate range of people.’

With fears the virus has spread into vulnerable homeless communities around Melbourne, medical staff are preparing for the worst.

The homeless woman is one of two new cases in St Kilda who don’t have fixed addresses, health authorities revealed.

There were just 39,832 tests carried out within the past 24 hours to 8pm on Tuesday, with authorities fearing more infections are going undiagnosed.

Health Department deputy secretary Kate Matson issued a stark warning to anyone who had been in Melbourne’s south and south-east with more than 50 exposure sites stretching from South Melbourne to Brighton.

Three more positives have also come from the St Kilda East engagement party, with a workplace contact of someone in attendance also contracting the virus.

Chief Health Officer Brett Sutton also pushed for those in St Kilda to get swabbed, insisting current testing rates are too low.

‘We want to see more tests right across the area because it’s becoming a real concern for us,’ Professor Sutton said in Tuesday night’s coronavirus update. 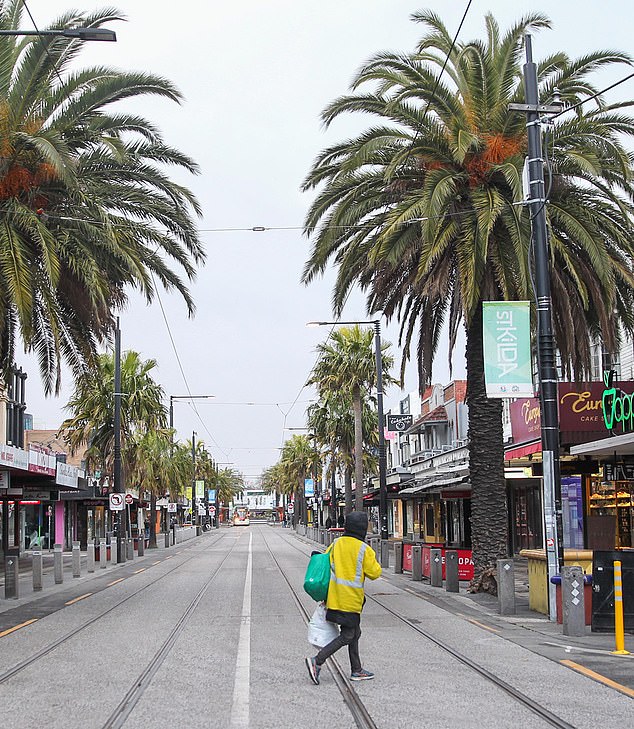 ‘We need more tests to track down unidentified chains of transmission and protect the whole local community.’

There are two mystery cases in Dandenong and Middle Park – people who both work in St Kilda but at unrelated buildings.

‘These cases got the virus from somewhere. The virus is circulating in those geographic areas,’ Ms Matson said.

‘We are concerned that there are cases here that we do not yet know about.’

Meanwhile, Police Association Victoria Secretary Wayne Gatt has expressed concern about the lasting effect of enforcing ‘unpopular and deeply restrictive rules for a prolonged period’ on community views of the force.

‘Police are now tasked with enforcing a curfew that no one has welcomed, and to prevent families from going to playgrounds that bring them joy,’ he wrote in an opinion piece published in the Herald Sun on Wednesday.

‘I hope that our members do not have to ever actively enforce this ban on playgrounds.’

About 50 children in the state aged 10 and under are fighting the virus, including a child in intensive care who is in a stable condition.

Professor Sutton said his team was probing a potential case of playground transmission, along with a ‘more definitive’ link between students from different classes who walked home together. 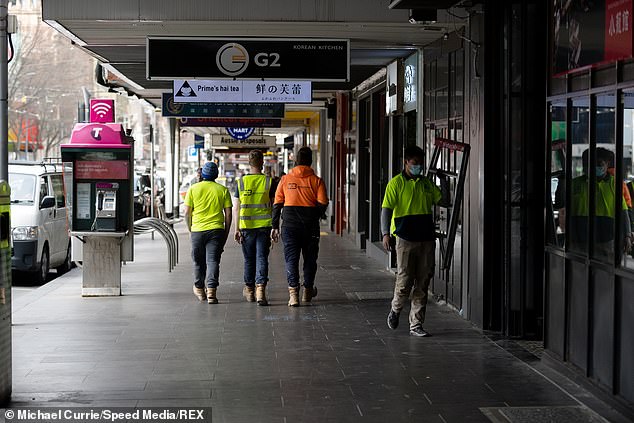 Melbourne is 13 days into its sixth lockdown, which was extended on Monday until September 2

Outdoor playgrounds, basketball hoops, skate parks and exercise equipment were closed and the city’s 9pm to 5am curfew reimposed this week, in a bid to contain the state’s worsening Delta variant outbreaks.

There are now more than 520 exposure sites in Victoria, including a Jacana skate park that was added as a tier two exposure site on Tuesday night.

Melbourne is 13 days into its sixth lockdown, which was extended on Monday until September 2.

There remain only five other reasons to leave home – shopping for essentials (one person per household per day), care and caregiving, exercise, authorised work and study, and to receive a vaccine.

Shopping and exercise remain limited to within 5km of a person’s home.

Exercise is further restricted to an individual and one other person, for up to two hours. Dependents can be included if they can’t be left unattended.

The other person can be from another household.

The change means those in large households will no longer be able to all exercise together.