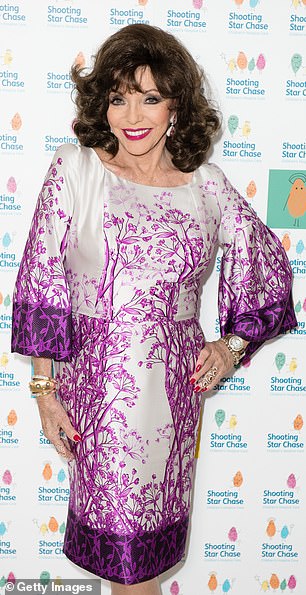 During a stellar career, she has picked up a Golden Globe and any number of bouquets, been made a Dame and dazzled on red carpets around the world

During a stellar career, she has picked up a Golden Globe and any number of bouquets, been made a Dame and dazzled on red carpets around the world.

But none of it has prepared Joan Collins for the bombardment she’s just been subjected to while in residence in London’s Belgravia.

‘Got home to find 40 parcels from Amazon that we didn’t order,’ Dame Joan squeals in horror, before wondering whether she and her husband, film producer Percy Gibson, have been the victims of a practical joke or what she witheringly describes as a ‘lame scam’.

Gibson, 55, her fifth husband, suspects the latter. ‘It happened the week after my computer came back from repair,’ he tells me.

Shortly afterwards, packages began stacking up on the couple’s doorstep at a manic rate.

‘I kept getting calls from Amazon drivers saying: ‘I can’t deliver your package — where do you want me to leave it?’

The timing couldn’t have been worse, coming ‘right in the middle of a shoot,’ adds Gibson, who’s been dismayed by what he describes as the ‘casual attitude’ displayed by Amazon.

‘I don’t think Amazon could have cared less. The packages are still here unopened. I’ve called them to say: ‘Do you want your stuff?’ I’m talking to them right now.’

Gibson believes that he and Joan have been victims of ‘brushing’. ‘Somebody starts sending you lots of packages from fake Amazon accounts,’ he explains. 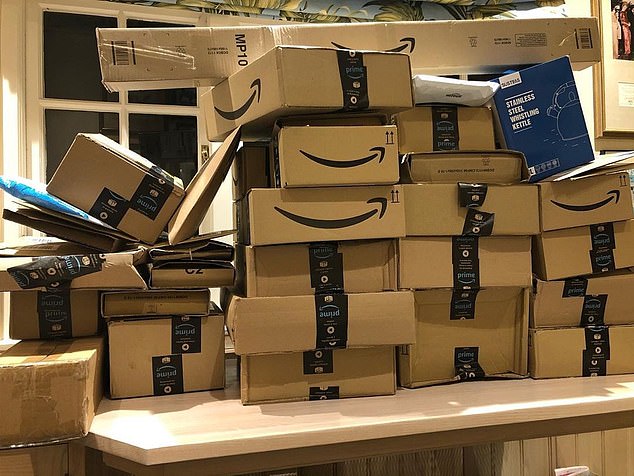 ‘They get the sales up, that way, for a particular product, and that enables people to write fake reviews.’

The couple do have one consolation: the family fortune has not been denuded.

Though they were concerned the scammers might have used Gibson’s American Express card, Amex has reassured him they would take care of it and recompense him if necessary.

Nevertheless, Gibson issues a heartfelt warning to others. ‘Don’t put your credit card down on your Amazon account. And, if you drop your computer off for repair, make sure you wipe everything before you give it to them.’

Amazon assures me that it is looking ‘further into’ Joan and Percy’s packages.

The late theatre, film and opera director Sir Peter Hall would be proud that two of his daughters have circumvented the pandemic by producing a Shakespeare play over Zoom.

Vicky Cristina Barcelona actress Rebecca Hall and her half-sister Jenny are streaming a reading of The Tempest over the internet next month and charging £10 a ticket.

The production stars Geraldine James and is directed by Jenny, Sir Peter’s daughter from his nine-year union with Gigi star Leslie Caron.

Bakewell revs up in BMW spat

Dame Joan Bakewell is furious with BMW after receiving her second police fine for leaving her Mini Cooper unattended with the engine running.

‘Buyers beware,’ warns the doughty broadcaster. ‘The Mini Cooper has a major design fault. Because it has no plug-in key, it’s easy to leave it with the engine running.’

Earlier this year the Labour peer, 87, was fined after leaving the engine running and the lights on while she was away for the weekend. She admitted to police that she had accidentally done this because it was a keyless vehicle and gave them permission to smash a window and switch off the engine.

But now it has happened again, she is despairing. ‘There is a design fault,’ she tells me.

BMW disagrees. ‘There isn’t a design fault,’ says a BMW spokesman. ‘The majority of cars today have keyless ignition systems and most customers really enjoy the convenience they bring.’

Perhaps Dame Joan should revert to a sturdy little Morris Minor. The best-selling model launched in 1948 when she was 15 and had a proper key to start the ignition.

Aristocratic chef Gizzi Erskine — aka Griselda Maxwell Erskine, 41-year-old daughter of the 2nd Baron Erskine of Rerrick — has penned an eco-friendly new cookbook but admits she doesn’t practise what she preaches.

Beehived Gizzi, author of Restore: A Modern Guide To Sustainable Eating, says: ‘Because I’m in London, I do eat fast food. I love the choice we have. I also love baths — that’s not very green, is it?’ 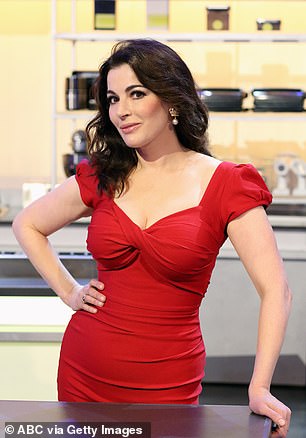 While many of us turned to pies in lockdown, it transformed Nigella Lawson into a daily exercise enthusiast, together with a side order of regular hoovering

A workout fit for a Domestic Goddess

While many of us turned to pies in lockdown, it transformed Nigella Lawson into a daily exercise enthusiast, together with a side order of regular hoovering.

‘I like having a shimmy around with the vacuum,’ she says.

‘I’ll suddenly spring into action, then I become so obsessive I can’t stop.’

And after all this frenetic activity, the Domestic Goddess says she likes to soak her feet before retiring.

‘I have a routine before bed which helps me wind down.

‘I have a collapsible washing-up bowl which I fill with hot water and magnesium salts. Then I sit for ten minutes with my feet soaking in it. I find that very restorative.’

Prolific playwright James Graham has dramatised Rupert Murdoch and Dominic Cummings on screen and stage but is shying away from writing anything about disgraced Hollywood mogul Harvey Weinstein — even though the pair collaborated on the Broadway musical Finding Neverland.

‘It is not necessarily yet my story to contribute to,’ says Graham. ‘There are people who have more interesting and urgent perspectives on this than I do.’ What a spoilsport. 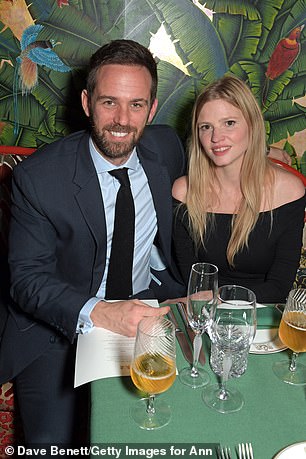 Lara met 37-year-old Grievson on the dating app, Tinder, two years ago, after her marriage to comedian David Walliams ended in 2015

Dutch-born supermodel Lara Stone, 36, and her property developer fiance David Grievson were among a select group of guests at a party at Annabel’s in Mayfair, which was showcasing an exhibition of bronze sculptures in conjunction with the Maddox Gallery.

Lara met 37-year-old Grievson on the dating app, Tinder, two years ago, after her marriage to comedian David Walliams ended in 2015, and the couple became engaged in February.

However, it was an early night for the lovebirds as the club had to close for the evening owing to Covid rules.

‘I have to blow the whistle at 9.45pm and close the doors at 10pm,’ explains Alexander Spencer-Churchill, the right-hand man of club owner Richard Caring.

As every schoolboy knows, that is when the real fun begins…

Not only did he become a father for the fourth time just three months ago, but on Wednesday he clocked up his 90th birthday with a family bash in the Swiss ski resort of Gstaad where he owns a £23 million chalet.

Pictured with his 44-year-old Brazilian wife Fabiana, who produced his first son, Ace, in July, the diminutive business magnate was presented with a cake so vast it seemed to dwarf him.

Decorated with pictures of his family and surrounded by smaller cup cakes and more pictures, Fabiana gushed: ‘Happy Birthday. We love you.’ 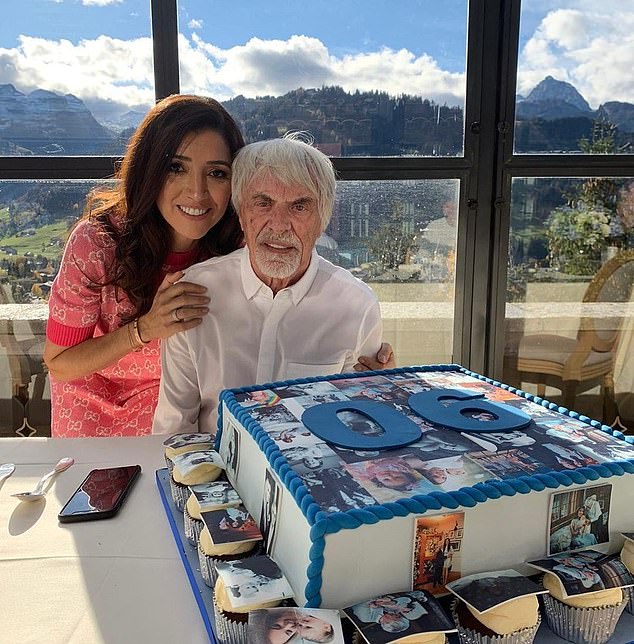 Not only did he become a father for the fourth time just three months ago, but on Wednesday he clocked up his 90th birthday with a family bash in the Swiss ski resort of Gstaad where he owns a £23 million chalet