Victorians desperate to secure rental properties are being preyed upon by scammers posing as landlords on Facebook.

As fierce competition drives up rents across regional Victoria, scammers lurking in Facebook groups are advertising fraudulent rental properties and demanding money to secure a lease. 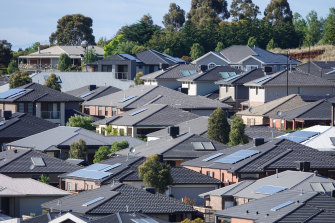 Police said people in the Echuca, Shepparton and Traralgon areas had reportedly been targeted.

Consumer Affairs Victoria recorded 31 reports of rental scams last financial year and said some scammers were showing renters properties they had no right to rent out. In other instances, people are asked to hand over rent and bonds for properties they have never inspected.

“These scammers often claim to be overseas or interstate and request that money be transferred online,” a Consumer Affairs Victoria spokeswoman said.

Liz Critcher’s daughter almost fell victim to a rental scam when responding to a post on Facebook. After sharing photos of a purported rental in Echuca, the fake landlord said she was working in New Zealand and unable to show prospective tenants through the property. She then requested $2800 for a bond and a month’s rent.

Ms Critcher and her daughter, who does not want to be named, decided to inspect the outside of the property and were shocked to discover the house was not up for rent. Instead, they encountered a grieving man who was cleaning his late mother’s home before her funeral.

“It was only because we came across the owner that alarm bells started ringing,” Ms Critcher said. “They are picking out a random address in town and claiming it as their own.”

In Shepparton, a woman living in a caravan park recently accessed her superannuation to pay four weeks’ rent and bond to a suspected scammer who was advertising a rental on a local Facebook group.

Michelle Attenborough, a case worker at Shepparton Families and Financial Services who was helping the woman, said the property looked too good to be true. 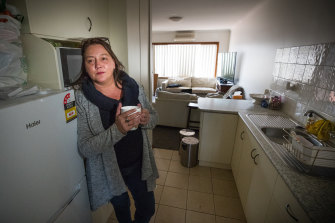 One of Michelle Attenborough’s clients through Shepparton Families and Financial Services was offered a rental on Facebook that she suspects is a scam.Credit:Jason South

“It was in a nice part of town, fully furnished, had three bedrooms and was $350 a week,” Ms Attenborough said.

The woman, her partner and two children were approved for the rental within 24 hours without any reference checks. The purported landlord told the woman – who was desperate to secure permanent housing for her family – he had moved interstate and an inspection would not be possible. He said he would post a key once the rent and bond had been paid.

“It struck me as odd,” Ms Attenborough said. “I suspect it is a scam.”

“It’s important for renters to remember to inspect a property in person and be satisfied that this is the affordable housing they are seeking before signing a contract and handing over money,” she said.

Ms Beveridge said scammers took advantage of people who were desperate and had limited options.

“The pandemic has reinforced people’s worries about housing.”

Consumer Affairs Victoria said potential tenants could protect themselves by contacting the supposed agency of the person they were dealing with, and by conducting an internet search of images to ensure advertised photos had not been copied from elsewhere.

“Anyone who believes they have fallen for a rental scam should contact their bank or financial institution immediately,” a spokesman said.

While weekly rents in inner Melbourne dropped as much as 22.4 per cent over the year to March, rents in regional Victoria have increased by up to 25 per cent. The rise has been spurred by Melburnians seeking a change of scenery after last year’s lockdowns.