The Saudi-led Arab coalition confirmed Yemen’s Houthi group launched overnight a “terrorist” attack against Saudi Arabia’s Abha airport. At least 26 people who were in the arrival halls of the airport were injured at approximately 12.21am BST (2.21am local time), when the Houthis launched a projectile in the facility’s arrival area, the coalition spokesman, Colonel Turki al-Maliki, said in a statement carried on Saudi-owned Al Arabiya TV.

Eight of the people injured have been transferred to hospital, while 18 suffered minor wounds.

Among those wounded in the attack, there are three women of Yemeni, Indian and Saudi nationality, and two Saudi children.

The Abha International Airport itself has also suffered damages, according to Colonel Turki al-Maliki. 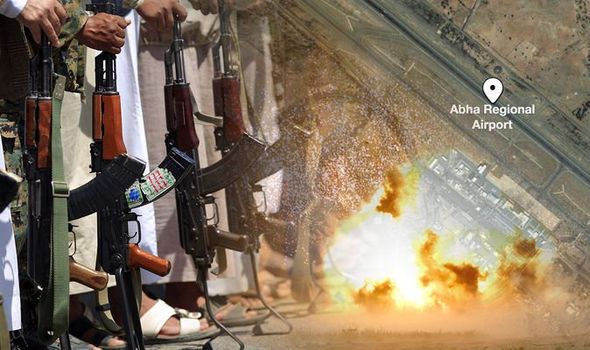 The Houthi group claimed the attack via the Houthi-run Masirah TV, adding the group launched a cruise missile attack.

The coalition spokesman attacked this statement, saying it marks a “flagrant acknowledgement of responsibility for an attack against civilian targets in violation of International Humanitarian Law”.

A similar attack with cruise missiles also confirmed the Houthis “have obtained advanced weapons from Iran”, the spokesman added.

The colonel also said this attack could amount to a war crime, as it targetted civilians rather than military forces, and pledged the coalition will carry out a “firm” response.

Colonel Turki al-Maliki vowed the coalition will take “immediate and severe measures to deter this terrorist militia in order to protect civilians and civilian facilities”.

He continued: “The responsible terrorists will be held accountable for plotting and carrying out this terrorist attack,” he added.

This aggression to the airport, which is approximately 125 miles north of the border with Yemen and serves domestic and regional routes, comes a day after Saudi Arabia said it intercepted two drones fired by the group, which controls a large part of Yemen, including the capital Sanaa.