A culture of silence within Australia’s Special Air Service led soldiers in Afghanistan to turn a blind eye to war crimes, the Federal Court has heard in the final days of war veteran Ben Roberts-Smith’s defamation case.

The parties are making closing submissions in the case brought by the decorated former soldier against The Age, The Sydney Morning Herald and The Canberra Times.

On Tuesday, the newspapers’ barrister, Nicholas Owens, SC, focused on one of the media outlets’ centrepiece allegations: that Roberts-Smith was involved in the murder of two Afghan prisoners during an SAS mission on Easter Sunday, 2009. 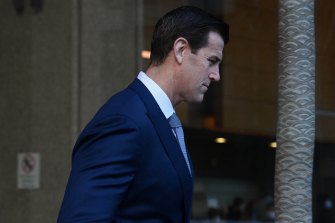 Ben Roberts-Smith arrives at the Federal Court in Sydney on Monday.Credit:Kate Geraghty

The newspapers allege two Afghan men were pulled from a tunnel on that day in a compound dubbed Whiskey 108 and taken prisoner.

The mastheads called seven witnesses in support of the allegation that men were found inside the tunnel and that Roberts-Smith executed one of them after directing a “rookie” soldier, dubbed Person 4, to kill the other man as a form of “blooding” or initiation.

Roberts-Smith and four of his former comrades maintained no men were found in the tunnel. He told the court that two insurgents were killed lawfully by SAS soldiers outside Whiskey 108, including one by him.

“There’s no doubt about the fact that the men were killed,” Owens said. “The only debate is about the circumstances in which they were killed.” 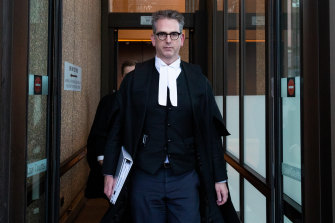 Owens submitted that if Justice Anthony Besanko accepted the newspapers’ witnesses, who told the court that up to three men were taken from the tunnel, “it follows almost inevitably that your Honour would disbelieve Mr Roberts-Smith’s entire case about Whiskey 108”.

He added that if Besanko accepted the evidence of a serving SAS soldier dubbed Person 41, who told the court he saw Roberts-Smith execute one of the men and direct Person 4 to kill the other man, “again it follows that Mr Roberts-Smith must be lying”.

Person 41 told the court in February that he did not report the alleged murders because there was an “unwritten rule” that “you just go along with whatever happens”.

Owens said Person 41’s explanation was plausible and consistent with him being a truthful witness. He submitted Besanko would find there was “clearly a culture of silence within the SAS”.

“People were willing to turn a blind eye to the most despicable and egregious breaches of the laws of war,” he said. “That does not … reflect well on anyone. But it is, with respect, a humanly understandable flaw in a person who has worked very hard to achieve something where there is a culture that says, ‘don’t rock the boat’.”

The trial has been running for more than 100 days and has cost the parties an estimated $25 million in legal costs. Final submissions, which started on Monday, are slated to run for eight days.

Owens told Besanko on Monday that the court faces “a stark choice between effectively irreconcilable accounts” of alleged events in Afghanistan. While the newspapers bore the onus of establishing alleged war crimes occurred on the balance of probabilities, Owens said Besanko was effectively being asked to decide “who is lying” in the case.

Roberts-Smith is suing the newspapers over a series of articles in 2018 that he says portray him as a war criminal who was complicit in the unlawful killing of unarmed Afghan prisoners. Under the rules of engagement that bound the SAS, prisoners could not be killed. The former SAS corporal maintains any killings happened lawfully in the heat of battle.

The newspapers are seeking to rely on a defence of truth and allege in a written defence that Roberts-Smith was involved in six unlawful killings in Afghanistan between 2009 and 2012.

But it was revealed in court that the newspapers’ written submissions accepted they could not prove one of those murders because a former soldier they submitted was crucial to establishing the allegation, dubbed Person 66, objected to giving evidence on the grounds of self-incrimination. Roberts-Smith’s lawyers have said the allegation ought to have been withdrawn after Person 66 was not compelled to testify.