Russia’s military strength ‘is at its highest since the Cold War’, with its nuclear weapons and air force particularly stronger, report says

Russia’s military might is at its greatest since the Cold War with its nuclear weaponry and air forces gaining particular strength, a report by a British think-tank says.

A decade-long revamp has given the Kremlin a well-equipped military in a ‘high state of readiness’ with upgraded aircraft and a ‘high-technology’ army based on professional recruits rather than conscription.

Moscow has the world’s largest nuclear warhead stockpile and has upgraded its equipment in the last 10 years – and is now pursuing hypersonic missiles and nuclear ‘torpedoes’ to modernise its doomsday devices.

The overhaul has made Russia’s military ‘more capable today than at any time since the end of the Soviet Union’, the International Institute for Strategic Studies says, emboldening Vladimir Putin to spread his influence in Ukraine, Syria and elsewhere.

With relations strained between Russia and the West, the institute’s Strategic Dossier warns that the revamped army is a ‘capable military tool that Moscow has demonstrated a willingness to use or to threaten the use of’. 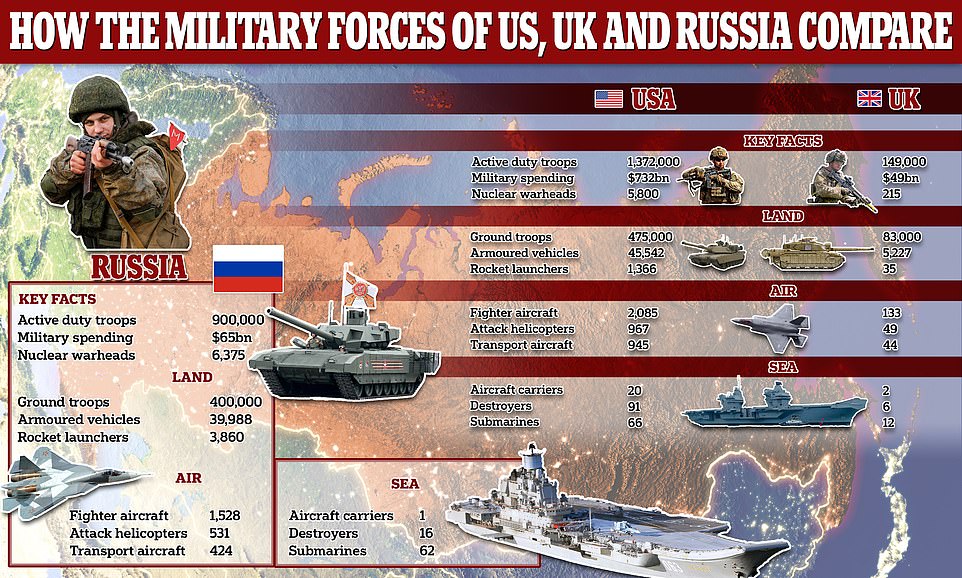 The report traces the overhaul back to the ‘near-debacle’ of Russia’s five-day war with Georgia in 2008, when Moscow ‘struggled to defeat’ the small ex-Soviet republic.

Russia’s conventional forces had long been under-funded after the collapse of the USSR and the resulting economic crisis, with only missiles given sufficient attention.

Russia fought bloody wars in Chechnya in the 1990s, and the Georgia campaign in 2008 ‘exposed shortcomings in equipment and training’, the report says.

In response, a new State Armament Programme approved in 2010 led to a massive increase in spending and upgrades to equipment including combat aircraft and land-attack cruise missiles for the Russian navy.

‘The upshot of the near debacle in Georgia in 2008 was a reform and modernisation programme that over the course of the following decade has seen a revamped military intervene successfully in Crimea, wage a covert campaign in eastern Ukraine and rescue the government of President Bashar al-Assad in Syria’s civil war,’ it says.

‘Though significantly smaller than their Soviet predecessors, these forces are better equipped, with professional personnel increasingly prevalent.

‘Elements are held at high readiness, and Moscow has left behind the era of mass mobilisation, where units would be rapidly brought to strength with reservists.

‘Today, Russia fields capable conventional armed forces, which Moscow has been willing to use operationally, as well as one of the world’s two largest strategic arsenals.’

The modernisation efforts have ‘ultimately provided Moscow with a credible tool for pursuing its national policy goals’, the report adds.

New introductions include the Su-57 stealth fighter which was conceived as a rival to America’s F-22 Raptor and made its first appearance at a Red Square parade in 2018.

Russia has tested the fighter jet in Syria and plans to have three Su-57 regiments in place by 2028, joining a fleet of more than 1,500 combat aircraft.

However, there was a setback last December when one of the jets crashed in the far east of Russia in an accident blamed on a steering system fault.

Meanwhile, the Soviet-era fleet of Su-27 fighters has been given a modern variant, the Su-35, with gives the air force its ‘most capable fighter/ground-attack aircraft’.

Russia has also sold Su-35s to China in a deal worth more than $2billion and has held talks about a further sale to Turkey.

Moscow’s total fleet of 4,163 aircraft across its army, navy and air force is the second-largest in the world and the same goes for its supply of transport aircraft and combat helicopters.

The London-based institute says the Russian air force has seen its capability improve ‘markedly’ while pilots are better equipped than before.

While the air force is not as large as the Soviet fleet, it has ‘benefited considerably from recent investments’, the authors say. 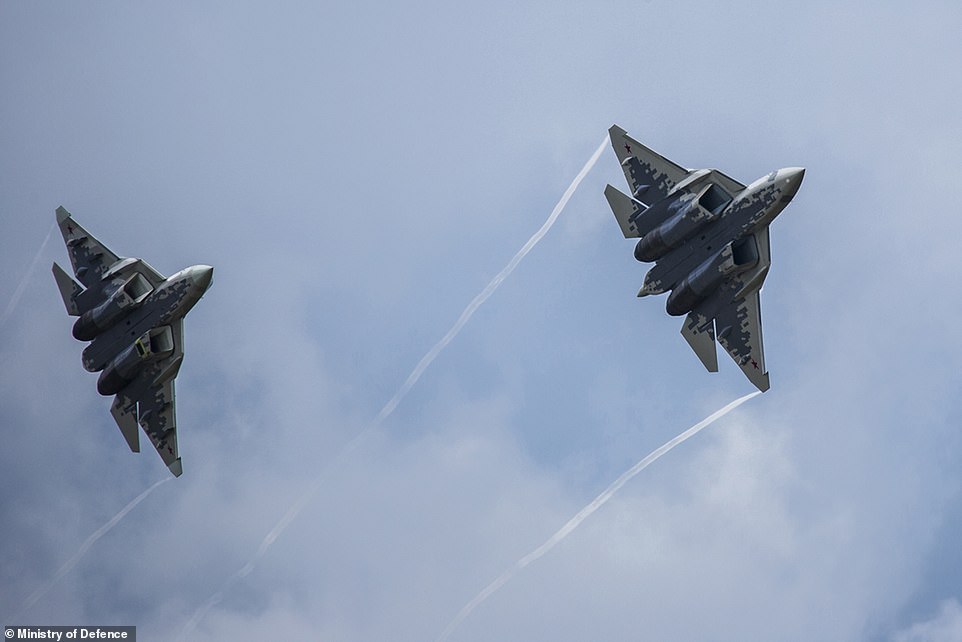 Russia’s Su-57 fighter jets, pictured at a military show in 2018, are joining a fleet of more than 1,500 combat jets in an air force which has been heavily upgraded 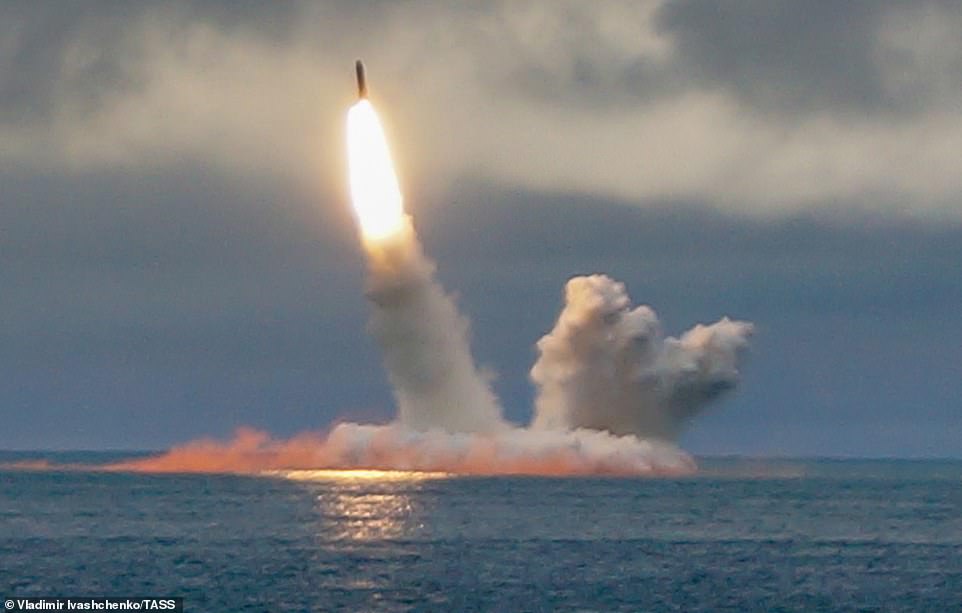 The Institute’s report says nuclear forces ‘continue to be viewed by Moscow as the ultimate security guarantor’.

Along with the air force, nuclear weapons have ‘benefitted most from a near-decade long increase in investment,’ it says.

Russia’s Strategic Rocket Forces have an estimated 302 intercontinental ballistic missiles (ICBMs) at their disposal, which can carry around 1,136 warheads.

Putin also has nuclear-powered ballistic-missile submarines and older nuclear bomber aircraft at his disposal, although these are seen as the weakest of the three.

Moscow has an estimated 6,375 nuclear warheads compared to America’s 5,800 and Britain’s 215, according to the Arms Control Association.

The Soviet Union had around 40,000 warheads at its peak but fears of a new arms race have grown after the US backed out of a Cold War-era treaty last year.

The Trump administration quit the pact after accusing Russia of violating the agreement signed by Ronald Reagan and Mikhail Gorbachev in 1987.

Russia responded by ordering a ground-launched version of the Kalibr cruise missile to be built, adapting a weapon previously launched from warships and submarines.

Such weapons had previously been banned by the so-called INF treaty which prohibited short-and intermediate-range missiles launched from the ground.

Putin also wants to give the Russian navy an underwater drone or ‘torpedo’ armed with nuclear strike weapons and carried by submarines.

The president has often spoken of a new generation of Russian nuclear weapons that he says are unequalled and can hit almost anywhere in the world, although Western experts have questioned his boasts.

Upgrades in Russia’s land and naval forces have been ‘patchier’, the report says, but they have still seen ‘considerable improvements in capability’.

Russia has only one aircraft carrier, the Admiral Kuznetsov, and suffered embarrassment when it caught fire last year, killing one sailor.

The Russian fleet of 16 destroyers is also dwarfed by America’s fleet of 91, while defence chiefs are still relying on ‘ageing’ Soviet-era vessels. 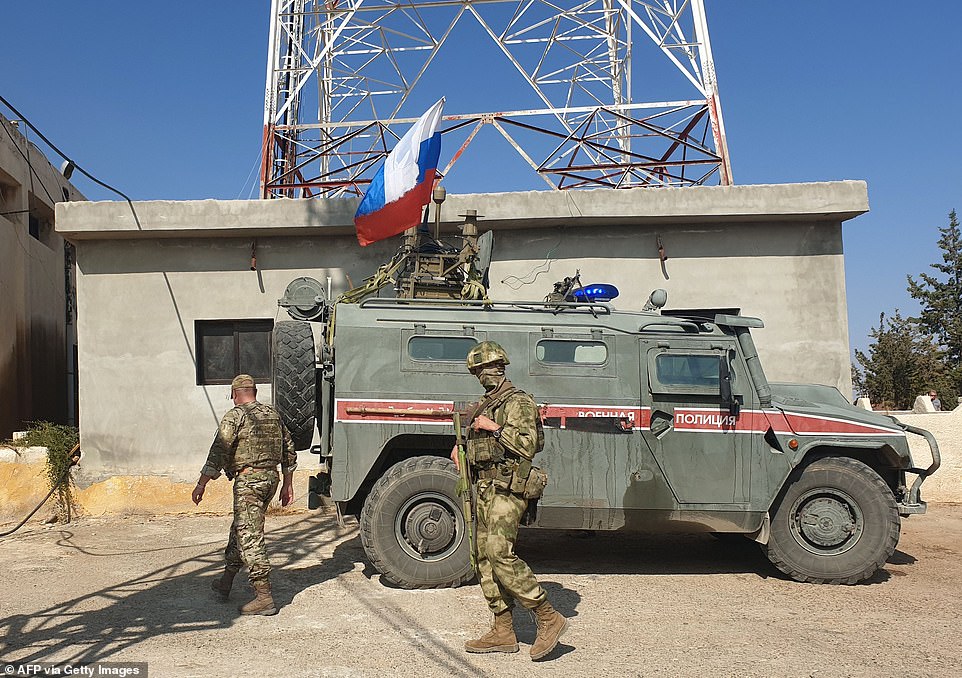 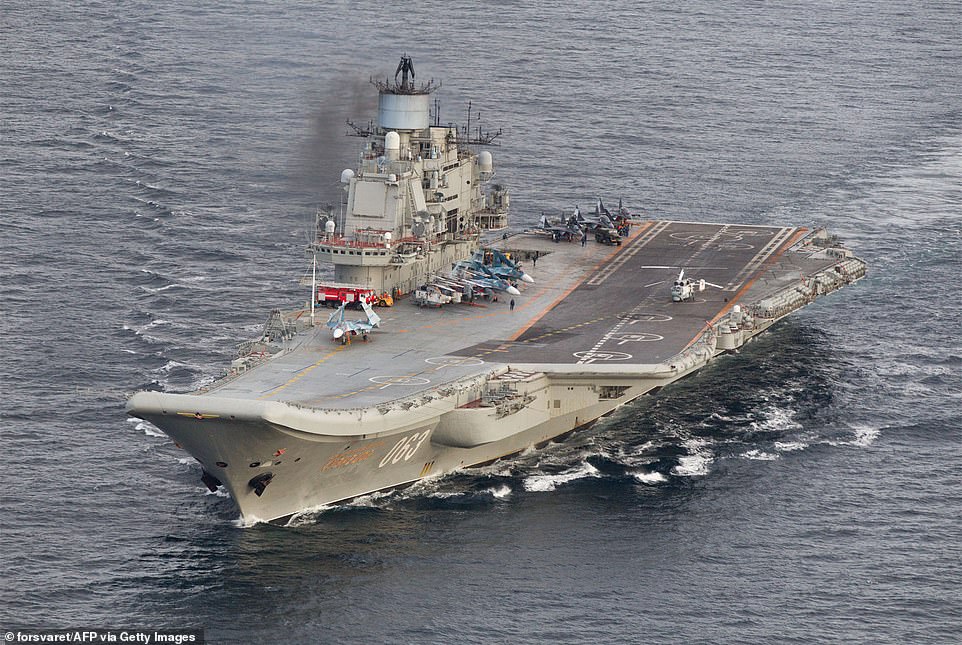 Russia has only one aircraft carrier, the Admiral Kuznetzov (pictured), and analysts say improvements in the navy have been more ‘patchy’

However, naval firepower has been ‘extended by the widespread introduction of land-attack cruise missiles’ such as the Club-K.

The missile system can be hidden inside a shipping container, theoretically giving any merchant vessel the capability to wipe out an aircraft carrier.

Russia’s ground forces, which number 400,000 troops supplied with nearly 40,000 tanks and armoured vehicles, are described as ‘smaller and more capable’ than in the 1990s.

‘Elements of these forces are held at a high state of readiness and have had recent combat experience,’ the report says.

‘The re-equipment programme has been complemented by reforms to create a core of professional military, much of it held at a high state of readiness, rather than depend on conscription.’

Russian men are currently required to complete 12 months of military service, although Putin has spoken of winding down conscription.

Putin boasted to Russian lawmakers in 2018 that the Kremlin now has a ‘modern high-technology army’.

Washington has previously accused Russia of ‘destabilising’ Europe by placing the nuclear-capable missiles in its Kaliningrad exclave that borders Poland and Lithuania.

The armed forces as a whole have also had their computer systems upgraded to replace what was ‘mainly a paper-based process’ for issuing commands.

The supply of money is likely to be smaller in coming years, not least because of the impact of the coronavirus pandemic.

A document published by Russia’s finance ministry in July proposed a five per cent cut in military spending between 2021 and 2023.

Still, ‘when combined with Moscow’s more assertive foreign policy, Russia’s armed forces in 2020 constitute a capability that should not be ignored,’ the report says.

Russia has become a major power-broker in the Middle East after Donald Trump pulled US forces out of Syria, leaving Moscow and Ankara to pick up the pieces.

Putin’s support has helped Syrian leader Bashar al-Assad to win back nearly all the territory lost to rebels who tried to overthrow him during the civil war. 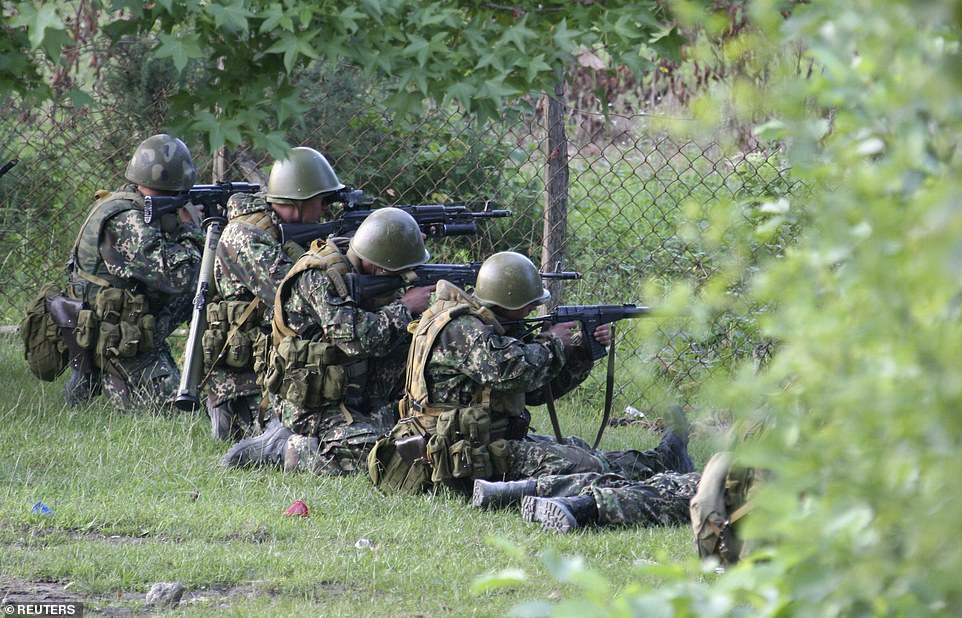 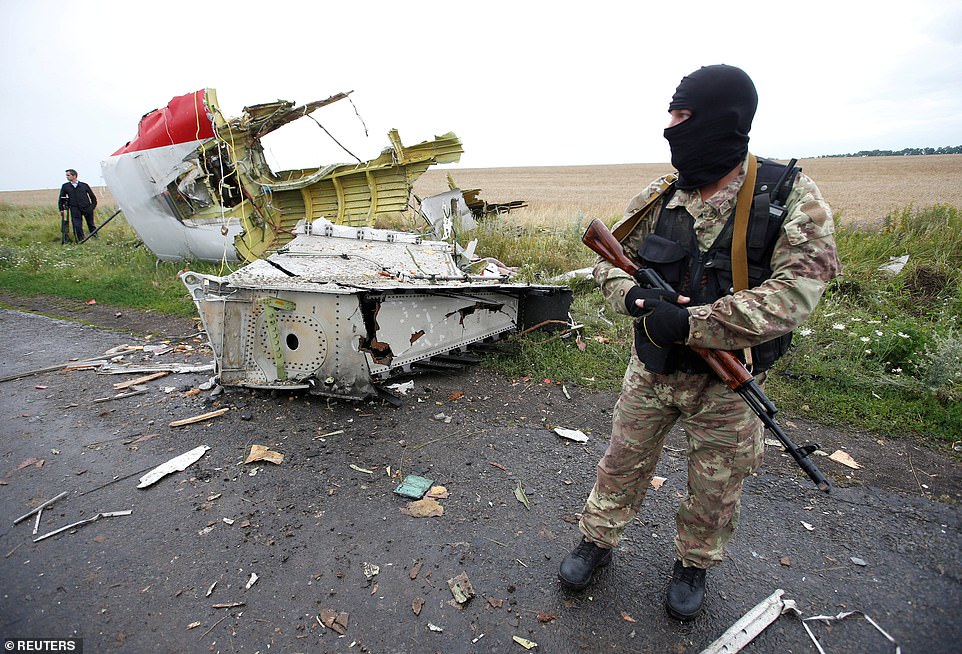 A pro-Russian separatist stands at the crash site of MH17 in Ukraine, a disaster which investigators blamed on a missile transported from a Russian military base

The official Russian deployment is thought to be about 5,000 troops, but mercenary group Wagner is also known to have fought in Syria.

The Kremlin insists that Wagner does not take orders from the Russian state, but evidence has emerged of links between mercenary leaders and Moscow’s top brass.

Syrian opposition groups claim that Wagner has been recruiting people under the supervision of the Russian army, which supports Assad.

In contrast to unpopular wars in Afghanistan and Chechnya, the Syrian conflict has seen a low Russian death toll because of the use of private contractors.

Washington has also accused Russia of deploying Wagner troops in Libya who have allegedly deployed land mines in and around Tripoli.

In Ukraine, Putin similarly denies an official Russian presence but Moscow is widely accused of helping separatists in the east of the country.

The US says that Russia ‘arms, trains, finances, leads, and fights alongside’ the pro-Kremlin forces.

Investigators say the missile that shot down passenger flight MH17 six years ago had been transported from a Russian military base in Kursk.

Russia annexed Crimea in 2014 and rubber-stamped its takeover with a referendum which was widely seen as illegitimate.

Meanwhile, relations between Russia and the West have been badly damaged by the poisonings of Sergei Skripal in 2018 and Alexei Navalny in 2020.

Both men were found to be poisoned with Novichok, a Soviet-era nerve agent, leading to widespread suspicion of Russian involvement.