A Russian journalist has died after setting herself on fire the day after her flat was searched by police.

Irina Slavina, 47, posted: ‘I ask you to blame the Russian Federation for my death.’

A deeply distressing video from BAZA media shows her setting herself on fire and a man desperately trying to put the flames out.

Slavina was editor-in-chief of Koza Press, in Nizhny Novgorod, a news agency that had run stories which had annoyed the authorities. 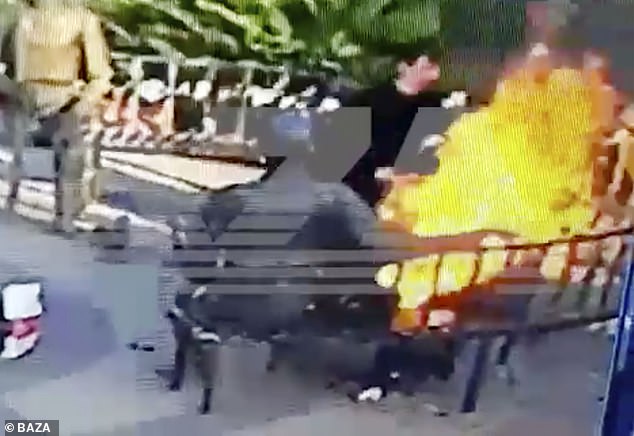 Irina Slavina, 47, editor-in-chief of Koza Press, set herself on fire outside the headquarters of the Interior Ministry in Nizhny Novgorod near a statue for Russian policemen 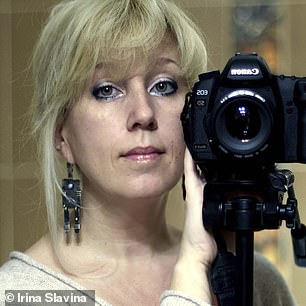 The married mother-of-one had been repeatedly fined after previous disputes with officials.

She set herself on fire outside the headquarters of the Interior Ministry in Nizhny Novgorod near a statue for Russian policemen.

The journalist ignited the flames near a statue to Russian policemen.

Slavina is believed to have been questioned in relation to a police probe into Open Russia, a pro-democracy organisation founded by London-exiled critic of Vladimir Putin, Mikhail Khodorkovsky, formerly Russia’s wealthiest man.

In June she was accused of spreading fake news and she posted: ‘For now, I just want to die…. the mental pain from injustice is so strong that it is already hard physically.’

The final straw was a search of her home on Thursday.

She posted: ‘They took what they found – all the flash drives, my laptop, my daughter’s laptop, computer, phones – not only mine, but also my husband’s, a bunch of notebooks on which I scribbled during press conferences.

‘I was left without the means of production.’

Slavina said that her husband had been the one that opened their front door to the police.

‘I was naked,’ she said. ‘I had to get dressed under the looks of an unknown woman.

‘They were searching the flat.

‘They didn’t allow me to call the lawyer. They were searching for brochures, leaflets, accounts of Open Russia.’

Opposition politician Ilya Yushin accused the authorities of ‘breaking people psychologically’, saying the current situation in Russia was a ‘nightmare’.

‘Over the past years security officials have subjected her to endless persecution because of her opposition (activities),’ said Dmitry Gudkov, another opposition figure.

A spokesman for the emergency services said a corpse ‘deformed by fire’ was found at the site.