Ronnie Corbett’s widow, 86, reveals she was thinking of buying back her old home from JLS star Oritsé Williams before it was destroyed by fire – as she tells of her heartbreak at ‘arson attack’

Ronnie Corbett’s widow has been left devastated after her old family home was burned down in a suspected arson attack on JLS star Oritse Williams after he was cleared of rape.

Williams’s six-bedroom mansion in Croydon, south London, was almost completely destroyed after it was ravaged by the fire that broke out on Tuesday.

The 32-year-old singer bought the house for £3million in 2013 but hadn’t lived there for a year amid his trial and it fell into disrepair.

Comedy legend Ronnie Corbett lived there with his wife Anne, 86, for 33 years, who still lives nearby.

Yesterday the widow revealed her and her daughters had planned to buy it back. She told The Sun: ‘I’m heartbroken and Ronnie would be too.’ 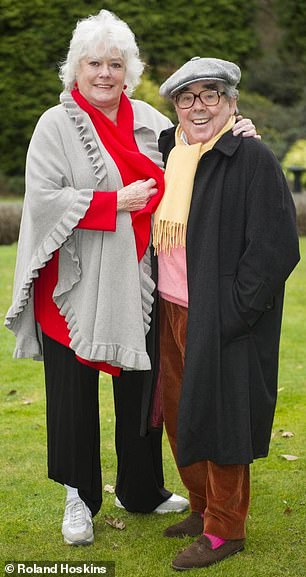 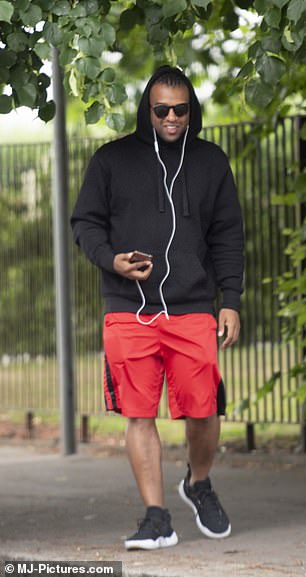 Oritsé Williams looked in high spirits as he was seen stepping out for the first time after a devastating blaze at his £3million home in Croydon, south London 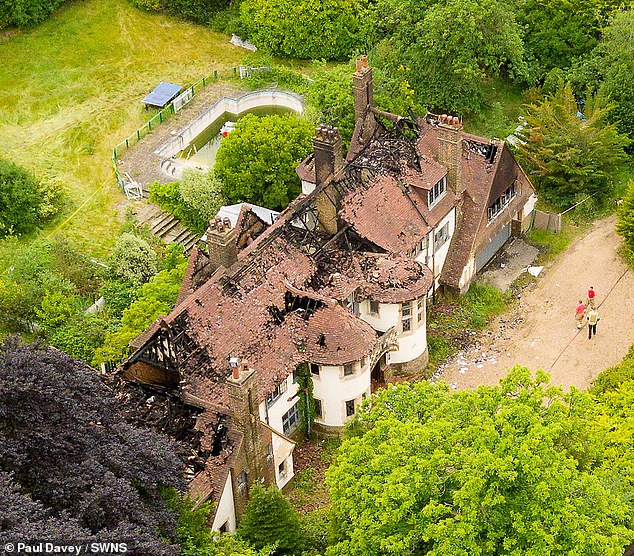 The six-bedroom mansion in Croydon, south London, was almost completely destroyed after it was ravaged by the fire that broke out on Tuesday 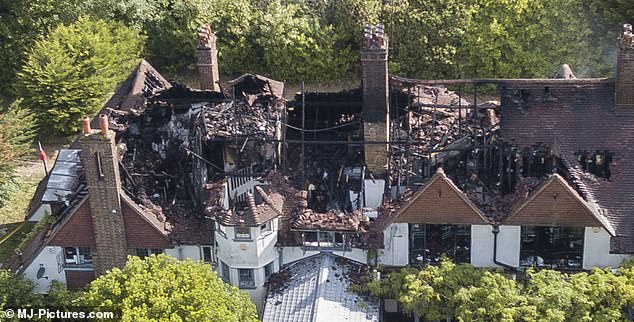 Mrs Corbett continued: ‘I go the smell of smoke last night but only learned it was our old house today.

‘It’s awful because at one stage my two daughters and I were talking about buying it back.’

Police revealed yesterday morning they are now treating the fire as suspicious and an investigation has been launched into the cause.

Williams bought the home for £3million with his then-girlfriend AJ Azari in 2013.

Five years later he put it on the market at a knock-down price of £1.75million after he was charged with rape, but it is yet to sell.

It features a hot tub in the bedroom, outdoor swimming pool and a ping pong table.

Pictures from the scene this morning show the burnt-out hollow of the property, which has been ravaged by the blaze. Images show how the windows and doors have been blown out and the roof has collapsed.

Yesterday Williams was seen stepping out with former EastEnders actress Preeya Kalidas for the first time since police launched their arson probe.

The singer looked in high spirits as he strolled down the street in a pair of red shorts and a black hoodie while listening to music. 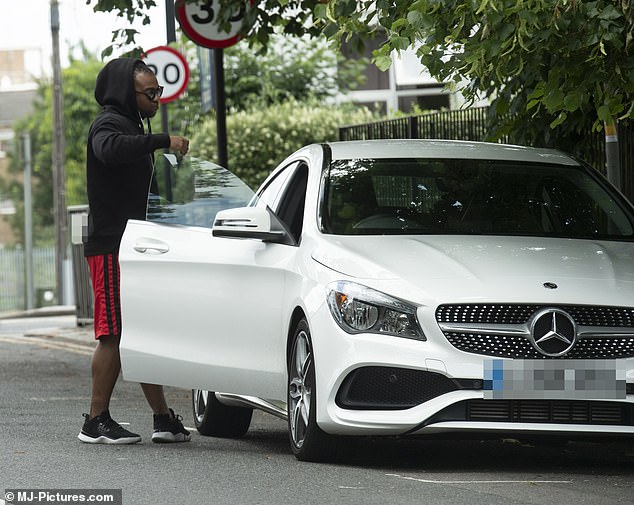 Williams, 32, wore a pair of red shorts and a black hoodie as he was seen parking up his white Mercedes

He was seen carrying several grocery bags into what is believed to be his current home. Shortly after arriving, he was joined by his close friend Preeya Kalidas

Kalidas was said to be getting ‘very close’ to the star back in October, with one source saying they ‘looked every inch a couple’.

Williams was seen leaving his white Mercedes and entering what is believed to be his current home, a modest two-bedroom flat in south London.

Shortly after he arrived with several bags of groceries, he was joined by Kalidas, who was said to be getting ‘very close’ to the star back in October, with one source saying they ‘looked every inch a couple’.

Kalidas kept her look casual as she chatted on the phone, wearing a pair of baggy multicoloured trousers and chunky sandals.

Last week, the boy band singer was found not guilty of rape. He had been accused of launching a sex attack on a 20-year-old tattoo artist fan at a hotel room, after allegedly plying her and two friends with alcohol on December 2, 2016.

Friend and tour manager Jamien Nagadhana, 32, was also charged with sexual touching and assault by penetration of the same woman at the pair’s room in Wolverhampton’s Ramada Hotel.

A jury of eight women and four men took two hours and 17 minutes to find Williams and Nagadhana not guilty of all charges following a trial at Wolverhampton Crown Court.

The fire at Williams’ home broke out at around 4.27pm on Tuesday. Part of the first and second floor were badly damaged, with the London Fire Brigade reporting that the second floor was 80 per cent damaged by the inferno. 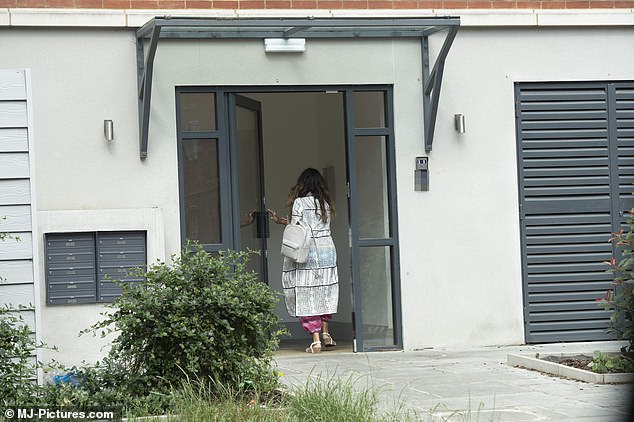 Unfortunately they could do nothing to prevent the three-storey property’s roof being destroyed. No one was injured in the inferno 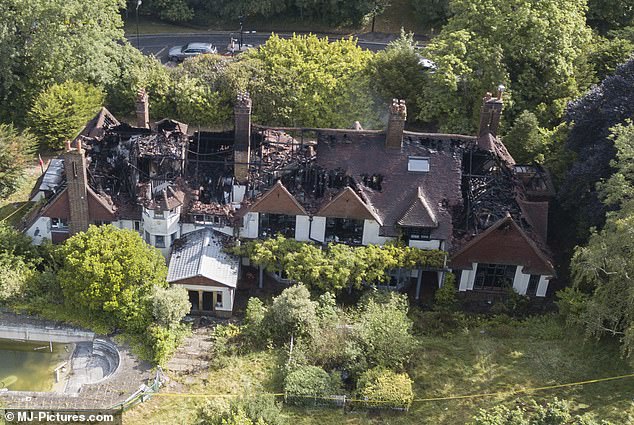 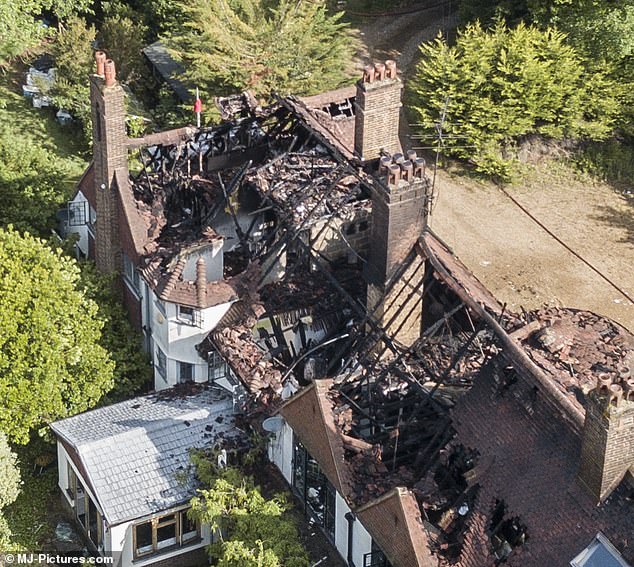 The Met Police said today they could not rule arson out, saying the blaze was being treated as ‘suspicious’ 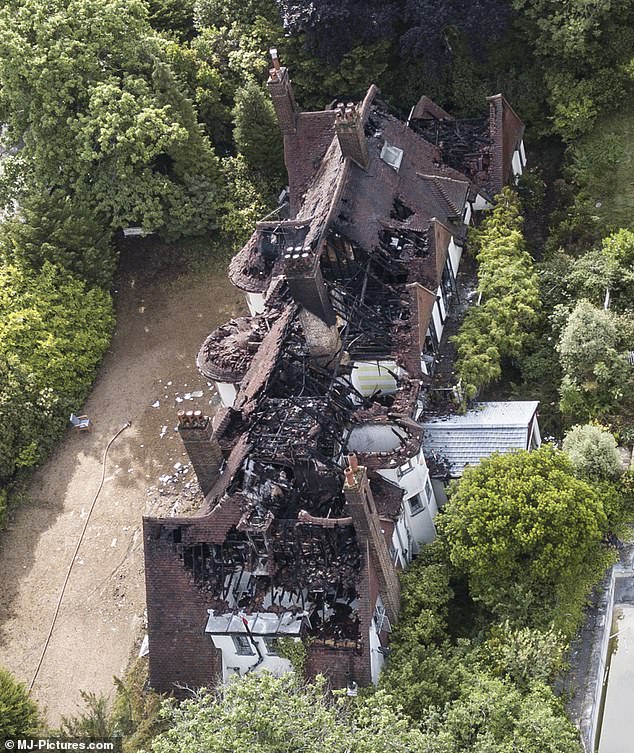 The roof of the mansion in Croydon, pictured this morning, has been almost completely gutted 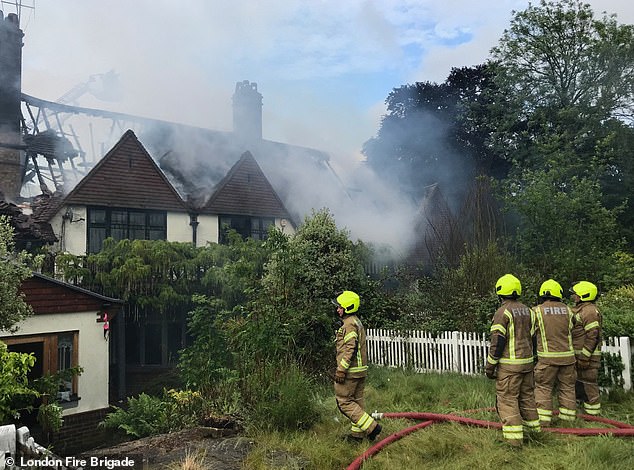 Fire crews from Addington, Croydon, Biggin Hill, Purley and surrounding fire stations were sent to the scene. The roof was completely destroyed in the blaze. Four firefighters stand on after desperately trying to save the property from complete destruction 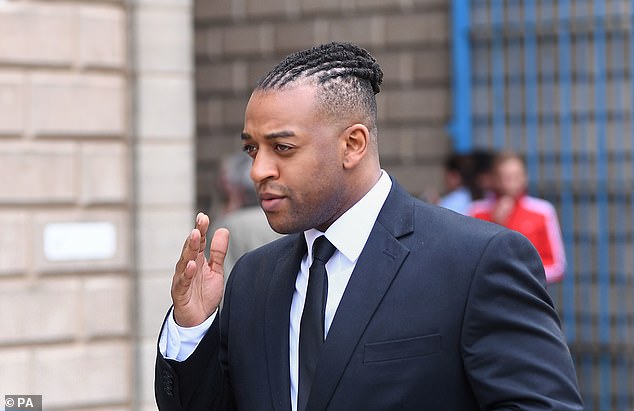 A spokesman for the force added: ‘Police were called at 16.39pm on Tuesday, 4 June following reports of a fire at a residential address in Spout Hill, Croydon. Officers attended with LFB. There were no reported injuries.

‘There have been no arrests. At this stage, the incident is being treated as suspicious.

‘The cause of the fire is under investigation. Enquiries continue, led by the South Area Command Unit CID.’

Firefighters stayed until around 7pm, when they were able to bring the incident under control.

A spokesman for the London Fire Brigade said: ‘Ten fire engines and around 70 firefighters were called to a fire at a derelict property in Croydon.

‘The Brigade was called at 4.27pm and the fire was under control by 6.58pm. The cause of the fire is under investigation.’

The JLS star is not believed to have been living in his Croydon property at the time of the blaze.

He had previously spoken of renovating it, but it is thought this was put on hold during his trial. 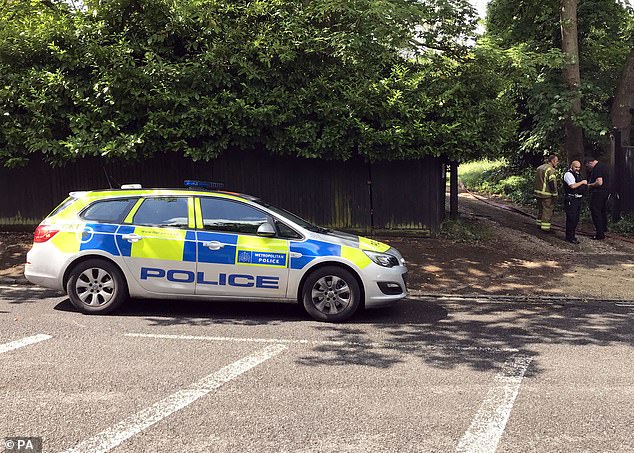 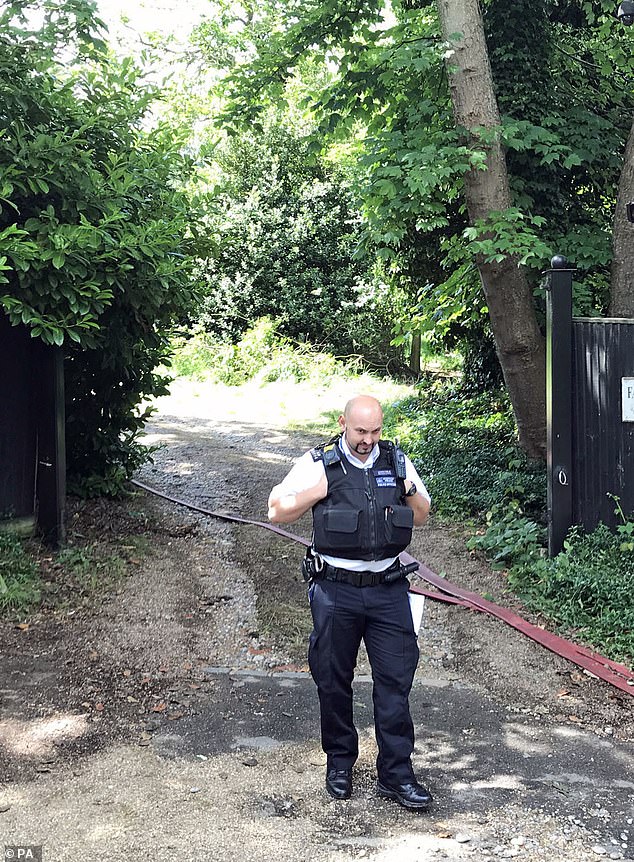 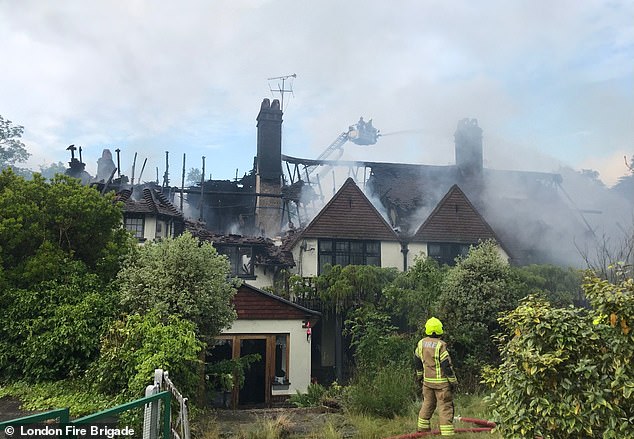 Ten fire engines were called to the blaze at the singer’s £3million mansion in Croydon at around 4.27pm on Tuesday. Fire crews from Addington, Croydon, Biggin Hill were dispatched to help control the flames 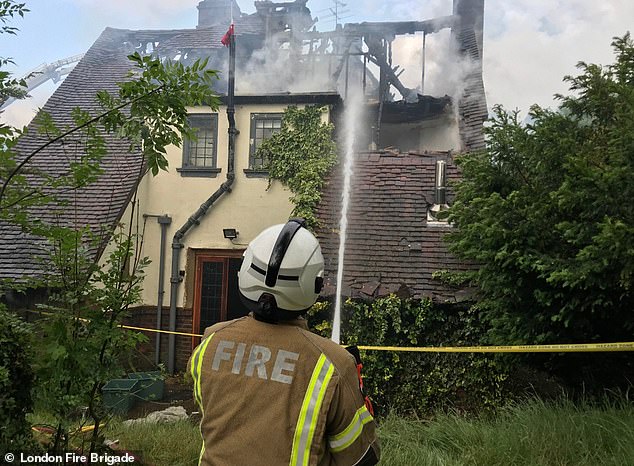 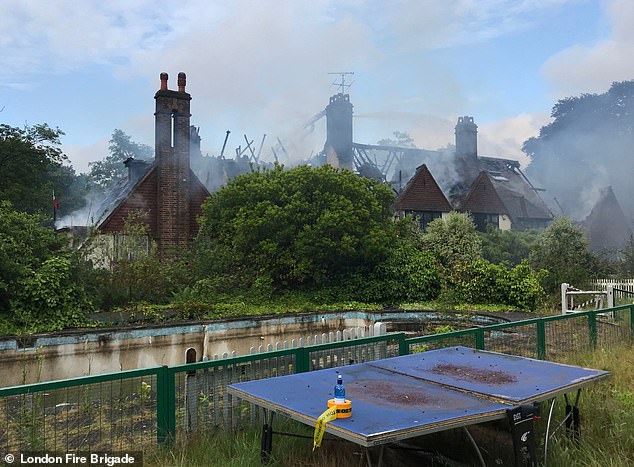 The cause of the fire is currently under investigation, but no persons were injured in the fire. The 32-year-old singer’s home had fallen into a state of disrepair after he was charged with rape last year. A unused table tennis table is pictured in front of the burnt out shell of Mr Williams’ home 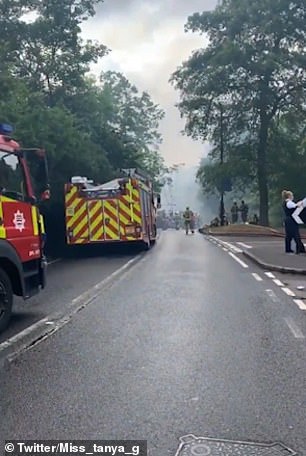 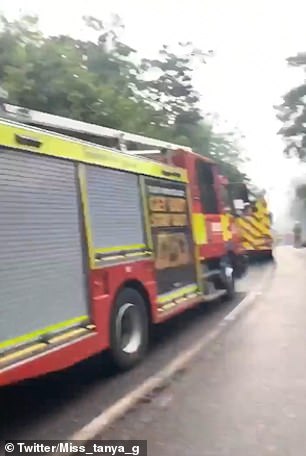 Video footage captured fire crews attending the scene of the fire, with smoke visible in the distance. Ten fire engines were dispatched to the blaze, according to the London Fire Brigade. And at its height, there were around 70 firefighters in action

Earlier photos from the rundown property showed a slimy green swimming pool, along with a fence in disrepair surrounding the property, and an overgrown garden with some discarded furniture.

Meanwhile, pictures taken in November at Williams’s home appear to show a smashed window, a broken fence and an overgrown garden with discarded furniture. 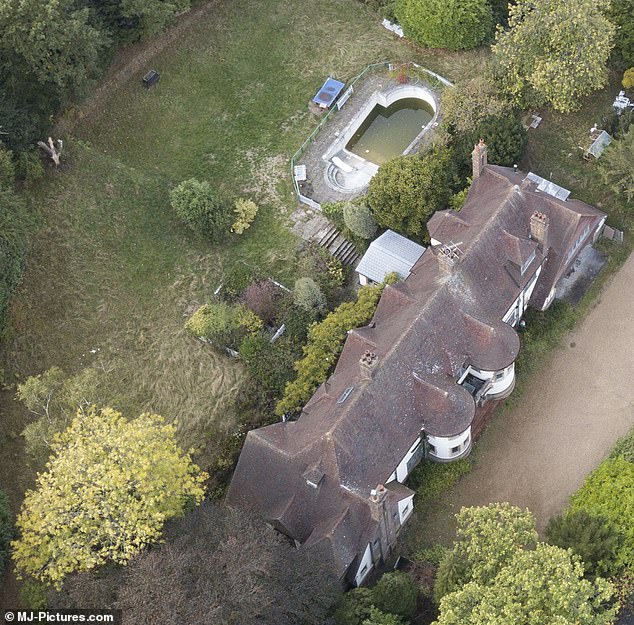 Photos taken late last year at the rundown property showed a slimy green swimming pool, along with a fence in disrepair surrounding the property, and an overgrown garden with some discarded furniture 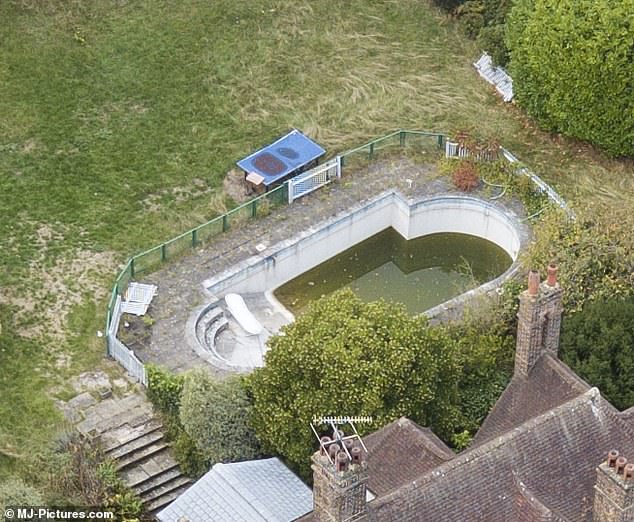 The property was formerly owned by the late comedian Ronnie Corbett but pictures taken late last year show how badly the property has been looked after in the years after. The swimming pool has turned a slimy green colour 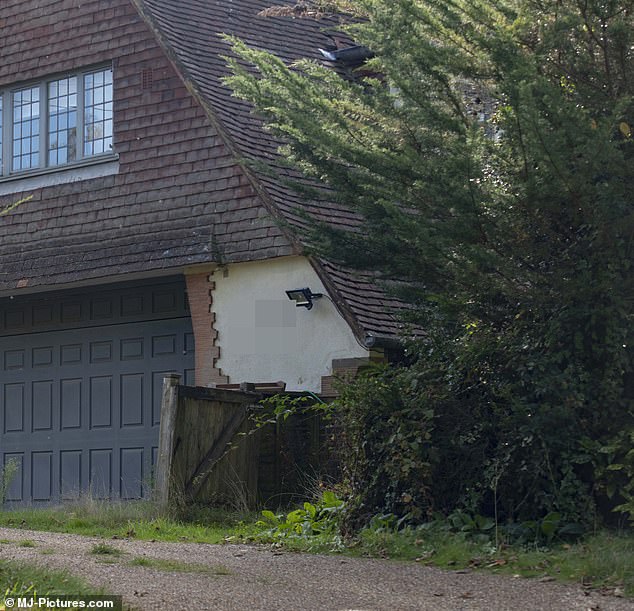 The lounge could be mistaken for a theatre with a grand ceiling and huge archways for homeowners to enjoy, while the back of the room has a wooden open balcony looking out onto the room which is supported by two pillars and a huge marble fireplace.

When he bought it, William said he was committed to renovating the property, telling Hello! Magazine: ‘There’s no point doing things half-heartedly.

‘Even though it’s a big project, we thought we’d take it on, work hard on it together and grow in it together.’

Following Williams’ acquittal last week, friends of the star came out in support saying he ‘conducted himself like a king’ during the trial. With fellow JLS star Marvin Humes among those speaking out.

He said: ‘Cleared..Not Guilty! Finally my brother @oritsemusic three years of hell is over!

‘No one will ever know or imagine what he’s been through..I’m just so proud of the way he conducted himself during what has been the most awful time.’ 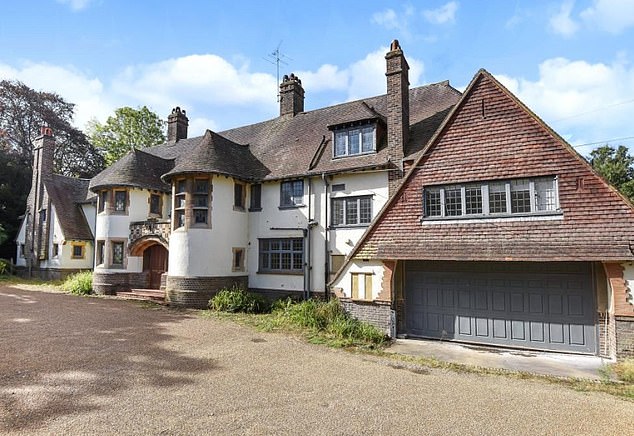 William put the the six-bedroom detached house on the market in January this year for £1.75 million (pictured). But it appears the property was not sold, despite it boasting several lavish details such as a bedroom hot tub, indoor balconies and marble detailing throughout 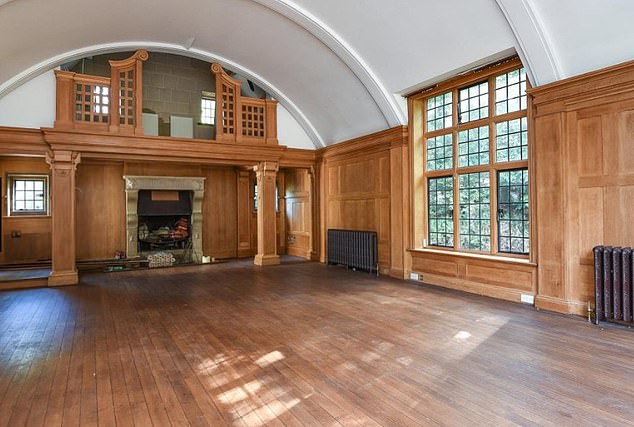 These pictures show the home when it was put up for sale. It boasts several lavish details such as a bedroom hot tub, indoor balconies and marble detailing throughout 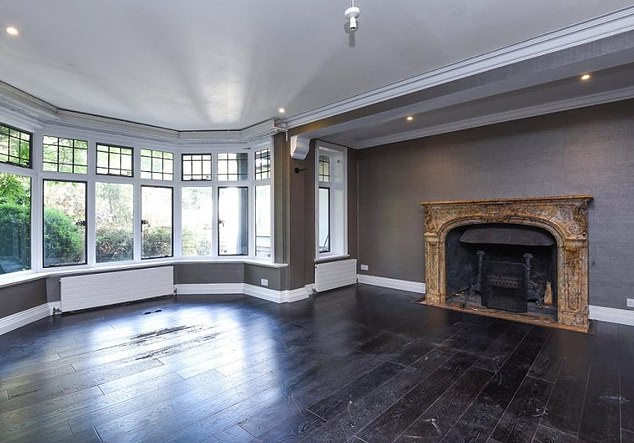 At the time of purchase, Oritsé said he was committed to renovating the property. But his recent trial may have altered his decision to proceed with the project 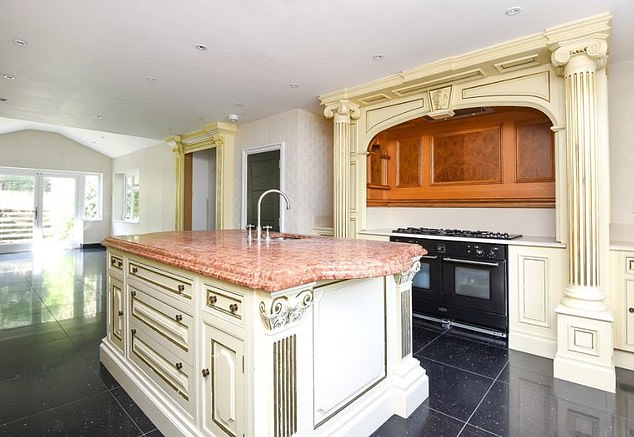 The kitchen has a theatrical theme with an archway and Georgian-style pillars surrounding a state-of-the-art double oven, while a dark pink marble island can serve as both a preparation and seating area for cooking 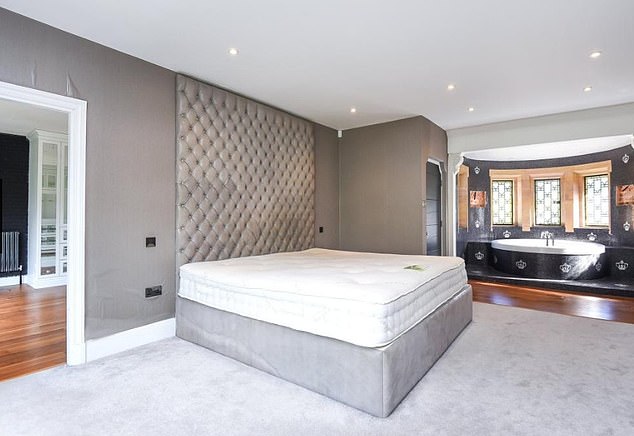 The bedroom follows the luxurious style with sparkly crown tiles, a huge whirlpool bathtub, a mirrored wardrobe and a terrace balcony

While Marvin’s wife Rochelle, who posted a picture of the pair together on Instagram, said: ‘This here is our brother, one of the kindest, most gentle, thoughtful men I know. Today he was cleared NOT guilty after 3 years of absolute hell.

She added: I’m so proud of how you have conducted yourself throughout this time. Reesh we love you so much and writing this crying so many happy tears, it’s over.’

Pixie Lott was among the stars to reply, as she posted several hearts in response to Rochelle’s message.

And Alexandre Burke, who JLS came runner up to during their stint on the X-Factor said:  ‘He’s so strong. Conducted himself like a king that he is. Onwards and upwards now for you @oritsemusic. Love you bro’.

JLS shot to fame on X Factor in 2008 after finishing runners-up to Alexandra Burke and went on to sell over ten million records. Williams set up a music firm and sang solo under stage name OWS after the band split in 2013.