Roger Federer's legendary career ended in a way that was only too fitting: alongside Rafael Nadal.

The Swiss tennis legend played the final match of his professional career at the 2022 Laver Cup on Friday in London, opting to take the court with Nadal as his partner in a doubles match against Americans Frances Tiafoe and Jack Sock.

Playing for Team Europe, Federer and Nadal fell 4-6, 7-6, 11-9, but had plenty of fun along the way, as pretty much the entire crowd and the other players in attendance, including other Federer rivals like Novak Djokovic and Andy Murray, were clearly aware the night was to be a sendoff.

Spontaneous smiles were a common sight from the players on the sideline to the players on the court to the man in the umpire chair, with regular chants and cheers in support of Federer, who was making his return from a long layoff due to knee surgery. The tears would come after the match, and in abundance.

Even in a casual atmosphere, the two legends had a tall order against Sock, a four-time Grand Slam champion in doubles and mixed doubles, and Tiafoe, who was coming off a breakout semifinals run at the US Open. 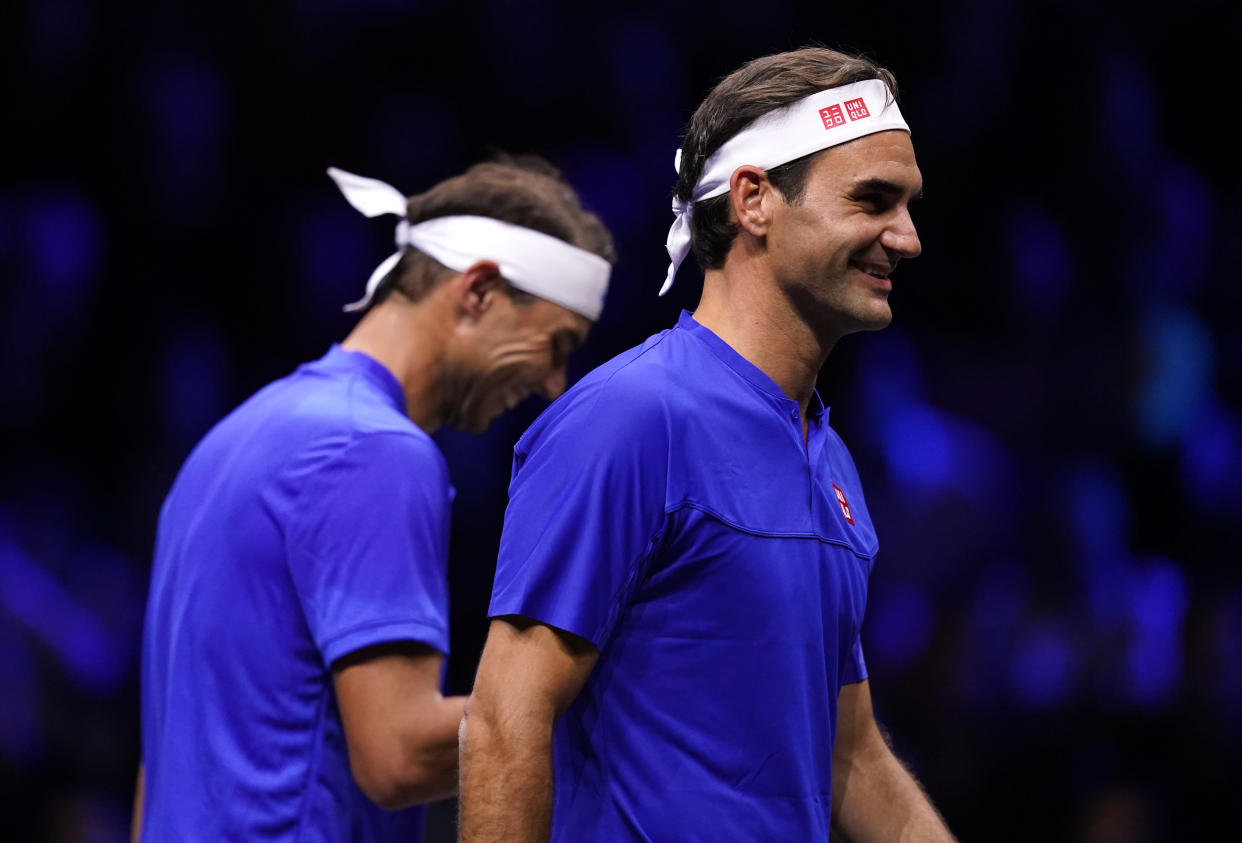 Federer announced last week he was retiring from tennis after the Laver Cup, finishing a career that included 20 Grand Slam singles titles, once a men's record, and some of the greatest tennis the world has ever seen against the likes of Nadal and Murray. Once the single most dominant force in the sport, Federer's career was limited toward the end due to persistent injury issues, but his status as an icon has never been in doubt.

The match on Friday began with the usual service dominance seen in doubles matches, with no break point coming until late in the first set. It took a wild shot from Nadal to keep the pair in what would be the decisive break of the set.

There was also an odd moment that seemed perfect in a weird way, when Federer, trying to get a shot around the net, ended up somehow hitting the ball through the net:

There's a first for everything 👀#LaverCup | @rogerfedererpic.twitter.com/ToNEwy0lId

The two sides traded breaks midway through the second set, which ultimately went to a tiebreak that Tiafoe and Sock won 7-2. It took some good tennis to get there:

The tie after two sets meant a winner-take-all 10-point tiebreak (things are different outside of a Grand Slam). Federer and Nadal jumped out to a 3-0 lead before Tiafoe and Sock fought back to tie it at 3-3.

The shot of the night actually came from Sock, who somehow managed to turn an overhead smash into a winner with a pure reflexes shot from the service line.

No side built up a lead more than a single point for the rest of the tiebreak, up until Sock and Tiafoe took the tiebreak and the match 11-9, closing the book on a career going back to 1998.

Federer, well-known for being among the coolest customers in sports, was visibly emotional as he embraced the rest of the players on the sidelines, then acknowledged the cheering crowd while fighting back tears. The camera even caught Nadal wiping away tears at one point.

This won't be the final time Federer picks up a racket, but it's the end of him playing on the ATP Tour and in Grand Slams. For a long time, he was the face of tennis, and it was a great face for a sport to have. Tennis might still have Nadal and Djokovic as well up-and-comers like Carlos Alcaraz, but it's undoubtedly the end of an era.

The players not lucky enough to be there in person posted tribute after tribute on social media:

What an emotional night! One and only @rogerfederer ! 🙌🏼

Humble in victory, gracious in defeat. Even in the toughest moments, always looking out for others, his teammates, opponents, fans, family. The epitome of class. You will be so very missed @rogerfederer 👏👏

I’m not crying!!! No!!!! Not at all! Balling my eyes out! Freakin hell!!! @rogerfederer you’re just the greatest

The greatest with the purest emotions ❤️