Dubai: Riot police and security forces have clashed with demonstrators in Tehran and dozens of cities across Iran, Iranian news agencies and social media say, as protests against a rise in petrol prices turned political.

The reports said demonstrators chanted anti-government slogans around the country on Saturday, a day after the government increased the price of regular petrol to 15,000 rials (52¢) a litre from 10,000 rials (35¢) and rationed it. 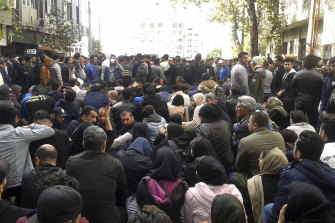 Protesters attend a demonstration after authorities raised gasoline prices, in the northern city of Sari, Iran, on Saturday.Credit:ISNA via AP

State television said police clashed with what it called rioters in some cities and fired tear gas to disperse them.

One person was killed and several were wounded in the city of Sirjan in Kerman province on Friday, the ISNA news agency quoted a local official as saying on Saturday.

"People attacked a fuel storage warehouse in Sirjan and tried to set fire to it," the state news agency IRNA said.

Videos posted on social media from inside Iran showed protesters setting fire to buildings and clashing with riot police. In other videos protesters blocked roads and set fires in the streets in Tehran and some other cities. Some chanted slogans against top officials. 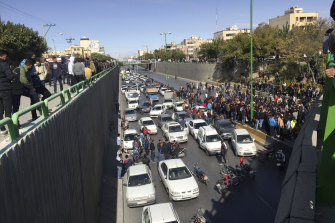 Cars block a street during a protest against a rise in gasoline prices, in the central city of Isfahan, Iran, on Saturday.Credit:AP

The videos and other images on social media could not be verified by Reuters.

"People are very angry here in Shiraz [city]. I heard gun shots. Hundreds of people are in the streets. They burned a police car this morning," a witness, who asked not to be named, told Reuters by telephone.

Protests spread to least 40 cities and towns on Saturday, Iranian media said. US Secretary of State Mike Pompeo supported the demonstrators, writing on Twitter, "As I said to the people of Iran almost a year and a half ago: The United States is with you."