A man who has recovered from coronavirus and recently returned to Colac is believed to be the source of COVID-19 fragments detected in wastewater samples taken from the south-west Victorian town.

Premier Daniel Andrews revealed on Wednesday morning that "strong" traces of the virus were found in sewage at Colac and could indicate an active case was in the community.

But Victoria's testing commander Jeroen Weimar later said the man believed to be the source of the viral fragments was known to the Department of Health and was no longer considered infectious. 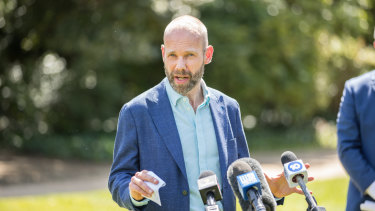 Commander of testing and community engagement Jeroen Weimar has issued a plea for people to come forward for testing in Colac.Credit:Simon Schluter

Barwon Health has increased testing capacity in Colac to accommodate an expected rise in demand for tests.

Mr Weimar said the man, who had previously been infected with the virus, was suspected of being the source of the fragments found in the wastewater after returning home to Colac in recent days.

"In the last seven or so hours we have identified somebody who has come back to the area and we’ve got good reasons to believe that are still shedding the virus in some significant volumes," he said. "I am very pleased we have made the connection to this individual."

He said the Victorian man was not infectious when he returned to his home, but had been on the department’s radar because he had experienced a "significant tail in shedding the virus", which had been noted in his other his medical work. 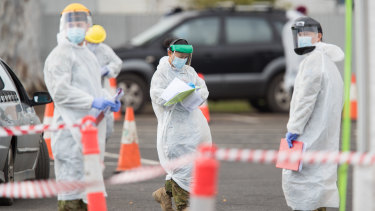 An earlier outbreak in Colac was linked to the Australian Lamb Company.Credit:Jason South

"We have no concerns about this individual … he’s been on our radar for a while so we are very comfortable with their health status and very pleased they are back at home," Mr Weimar said.

He confirmed testing would be increased in holiday and beachside towns as thousands of Victorians escape Melbourne for the summer.

But he urged anyone with even the mildest of symptoms to continue to get tested for the virus.

"It is critically important as we continue to enjoy the freedoms and increasing relaxation of restrictions that any of us who do feel symptoms please do go and get tested," he said.

Mr Weimar said extensive testing had been undertaken in the previous coronavirus hotspots of Hume and Wyndham council areas and would be expanded to metropolitan and regional local government areas, including Woodend in the coming days.

"We really want to work to ensure we make sure we look in every dark corner where the virus might still be lurking."

Barwon Health infectious diseases director Eugene Athan said wastewater tests were highly sensitive and could pick up fragments for some time after the infectious period.

"We've found the occasional individual who sheds the virus for some months but is no longer infectious," he said. 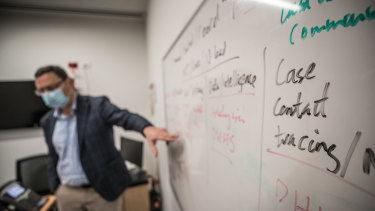 Professor Athan said previous outbreaks had shown the residents of Colac were "switched on" and would turn out for testing.

"They're well aware of the importance of picking up any potential cases very quickly."

But he insisted visitors should also be tested if they have any symptoms, particularly truck drivers.

Colac, which is home to about 13,000 people, recorded almost 100 cases by early August. The outbreak was connected to the Australian Lamb Company abattoir in Colac.

After a concerted community campaign, the number of infections was driven down quickly before there was a smaller second wave in the town.

Wastewater tests have previously detected the presence of the virus in other parts of regional Victoria, including Anglesea, Apollo Bay, Portland and Benalla.

Professor Tony Blakely, epidemiologist at the University of Melbourne, said wastewater testing tended to deliver a high proportion of false positives. But it was useful in helping authorities determine where to allocate their resting resources.

"You deploy your resources better," he said.

Mr Andrews has foreshadowed that he would make announcements about further easing coronavirus restrictions across the state, including density limits, on Sunday.

"It’ll mark a really important phase as we lock in rules for a few months for that COVID safe-summer," he said. "I think that'll be good news for many people right across Victoria."

Anyone who has visited Colac, or been in the Colac area, on Monday or Tuesday and has even the mildest of symptoms should get tested. Testing is available at Colac Neighbourhood House from 9am – 12.30pm on Thursday and Friday.