Despite polls suggesting that the Democratic Party was likely to seize control of the Senate, as counting continued into the night in the United States it appeared that both parties had flipped just one seat each, leaving the Republican Party with a three-seat lead, with seven to be decided.

Should Joe Biden win the White House but Republicans maintain control of the Senate it would be hard for the new president to implement much of his progressive program. 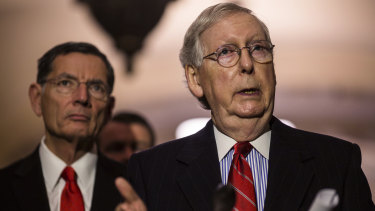 This includes plans articulated by Biden for a $US2 trillion (A$2.89 trillion) green stimulus package, as well as any moves to increase the number of justices on the Supreme Court in order to shift its political balance as some Republicans had predicted.

Similarly, if Donald Trump wins, Democratic control of the House would act as a break on Republican legislation efforts, while the Senate would be able to continue nominating and confirming conservative judges.

The Senate majority leader Mitch McConnell, who has made himself a chief antagonist of Democrats for his aggressive and effective work to install Republicans to courts after blocking Barack Obama's Supreme Court nominee, held his Kentucky seat, winning his seventh term.

“Kentucky wants more of the policies that built the best economy in our nation’s modern history — not socialism.”

In a recent radio interview he said that should he be re-elected, installing judges would be his priority.

Lindsey Graham, the senior senator for South Carolina who famously excoriated Trump before the last election only to become one of his most impassioned cheerleaders in office survived a challenge by Democrat Jamie Harrison, who out-spent him in the final weeks. 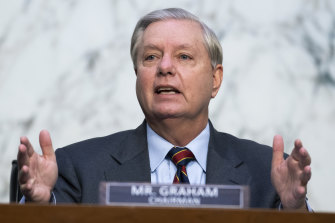 Due to election laws in Georgia and Louisiana – where candidates are forced into a runoff election should they not reach 50 per cent of the vote – it may be weeks until final results are known. Three seats are up for grabs in those states.

In Iowa the Republican Joni Ernst beat back a challenge by Democrat Theresa Greenfield in the most expensive senate race in that state’s history.

In Colorado the former Democratic governor John Hickenlooper managed to defeat the incumbent Republican Senator Cory Gardner. It appears Hickenlooper was buoyed by a wave of support for the Democrats in a state that was once a battleground but that has drifted away from the Republicans.

“Please understand, to all the people who supported our efforts tonight, that (Hickenlooper’s) success is Colorado’s success, and our nation and our state need him to succeed,” Gardner said in a concession speech less than an hour after polls closed. “We need to be united together.”

Democrats were projected to retain a majority of the House of Representatives, which they took control of after winning 40 seats in the 2018 midterms.

In Georgia, Republican Marjorie Taylor Greene became the first avowed supporter of the QAnon conspiracy theory to win, though her victory was assured after her Democratic opponent quit the bitter race before election night.

In Tennessee Democratic Senator Doug Jones lost his campaign against Republican Tommy Tuberville, a former football coach who campaigned on his loyalty to Trump, his support for gun rights and his opposition to abortion, flipping the seat back to the GOP.

“I do believe today that God sent Donald Trump to us,” Tuberville said at an Alabama Farmers Federation meeting last year. “He’s the only thing standing between socialism in this country.”

Understand the election result and its aftermath with expert analysis from US correspondent Matthew Knott. Sign up to The Sydney Morning Herald‘s newsletter here, The Age‘s here, Brisbane Times‘ here and WAtoday‘s here.