A nice way to keep out of the rain, dear! Reindeer-loving father-of-one, 46, has one of the biggest herds in the country and loves them so much he even SLEEPS in their stable

A reindeer lover has one of the biggest herds in the country and he adores them so much, he even sleeps in their stable.

Single father-of-one Rob Morgan from Swansea in Wales started his herd 13 years ago and has been dubbed ‘Mr Christmas’.

It all began when he missed having cattle after getting rid of livestock to focus on planting Christmas trees instead.

He had two reindeer to begin with and says he fell in love with what he describes as the ‘most maternal animal ever’, with the prettiest calfs in the world.

During birthing season in May, the fifth-generation-farmer gets so anxious about his herd, that he sleeps in their stable to ensure the pregnancies go well.

Rob has a Santa’s grotto and winter wonderland at his farm, which he uses to educate people on the plight of the reindeer, which are falling in number worldwide.

The 46-year-old said: ‘I planted a few Christmas trees one year and they were doing well so I ended up planting so many I decided to sell my sheep and other animals to make room for the trees.

Reindeer lover Rob Morgan (pictured) has one of the biggest herds in the country and he loves them so much, he even sleeps in their stable

‘The farm felt empty because there were no animals and I love animals so I bought a reindeer and that was it.

‘I’ve now got one of the biggest reindeer herds in the UK.’

Rob and his ten year old son Lloyd, look after the beautiful creatures together at the farm named Poundffald.

The reindeer-lover even gets moss imported from Scandinavia to give them the best diet.

Rob continued: ‘I am single and I live on the farm with my son Lloyd, who is ten and loves the reindeer as well.

‘I always loved Christmas when I was younger and I wanted to recreate that.

‘As well as the reindeer herd, we have a grotto at the farm. It’s always Christmas at the farm here.

‘The shed where I used to keep other animals is an indoor winter wonderland.

‘The winter wonderland was lonely at first but now we have elves and Santa Claus. 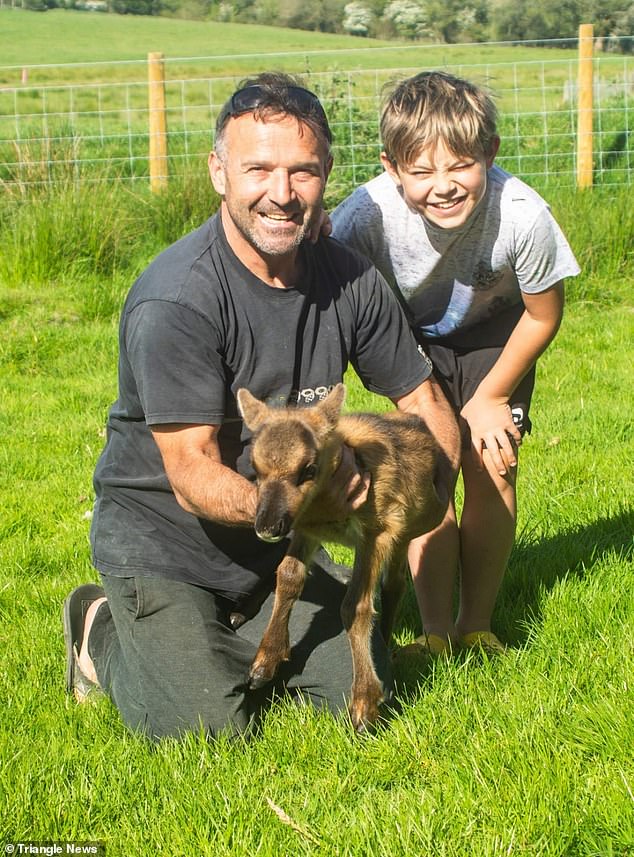 Rob and his ten year old son Lloyd (pictured together), look after the beautiful creatures together at the farm named Poundffald

‘I have been nicknamed ‘Mr Christmas’.

‘I try to make everyone’s Christmas complete with a tree, the reindeer and Santa so even though I enjoy Christmas, I do lose quite a bit of weight in the run up, making sure everyone is happy.’

Rob went on to describe the beauty of springtime with his herd.

He said: ‘In May when the reindeer give birth, I sleep with the reindeer to make sure they give birth correctly. It’s a tense time because reindeer are very very maternal.

‘Out of all the animals I’ve ever come across, reindeer are the most maternal.

‘Because of that, I want each and every one of them to have a baby reindeer.

‘Baby reindeer are the prettiest thing in the world, fact.

‘The mother’s don’t leave their calves alone at all so I have to make sure they stay alive so I have to sleep by them to keep an eye on them. It’s intense but it’s nice.

‘At the start of May they are very pregnant for about a month and then they start popping out everywhere.’

Rob has become so passionate about his herd, he now campaigns for their welfare and gives talks to schools about their dwindling numbers.

He said: ‘For thousands of children, the highlight for them coming to the farm is seeing the reindeer which is great for them and they get educated about it.

‘I am a staunch supporter of reindeer, I also take them out to schools to educate people on their plight in Scandinavia. 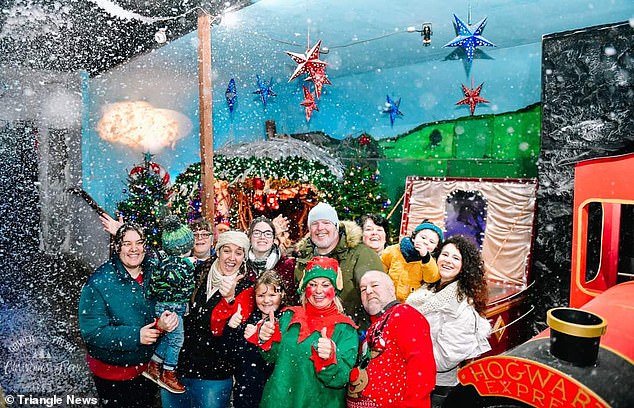 Rob has a Santa’s grotto and winter wonderland at his farm, which he uses to educate people on the plight of the reindeer, which are falling in number worldwide. Pictured are the staff at the winter wonderland

‘Obviously, numbers are dwindling. I took some reindeer out to a school this week and spoke for hours about them and the children were fascinated.

‘These reindeer have kept civilisations alive for years with their meat and fur. Reindeer are not just for Christmas.

‘Literally thousands of children come to visit every year and I love educating them.

‘In Scandinavia where they roam, there are now gas pipes going across their land and global warming is affecting their land.’

Rob went on to explain how to take care of reindeer, by keeping them in herds rather than as pets.

He said: ‘The more reindeer there are, the happier they are. People who keep two or three reindeer – that’s not right. They are happy in numbers.

‘They are a herding animal.’

Rob got his first two reindeer – Pudding and Lighting – 13 years ago. 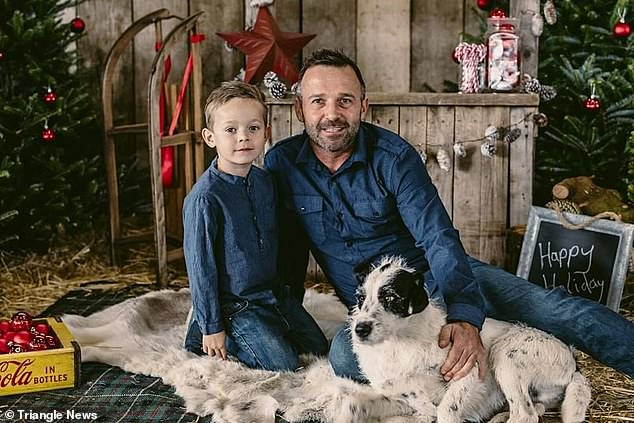 The reindeer-lover even gets moss imported from Scandinavia to give them the best diet. Rob and his son Lloyd are pictured with their dog 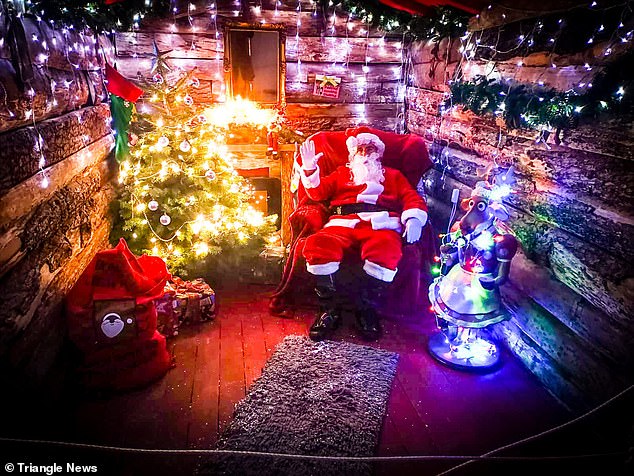 Most of the 35 are offspring from this first match with a few non-relative males added to the brood for good breeding.

Rob continued: ‘It is a complex process breeding them but we have a very healthy and good looking herd.

‘I am with them morning and night and they accept me as part of the herd.

‘So many people think they are for Christmas and I could have sold any one of them so many times over but if the wrong people have them, they won’t have a good and long life.

‘Basically I have moulded my farm around them. They love it and they basically have a five star life.

‘They are such an intelligent animal, so unique, they all have their own personalities and very brainy and they really are so maternal, they are amazing.’ 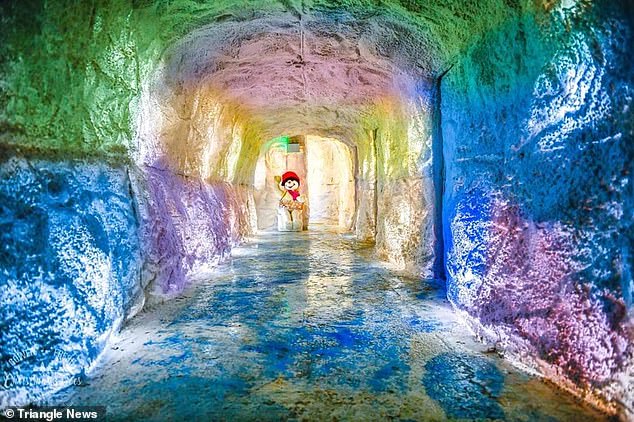 Rob got his first two reindeer – Pudding and Lighting – 13 years ago. Pictured is the winter wonderland at his farm 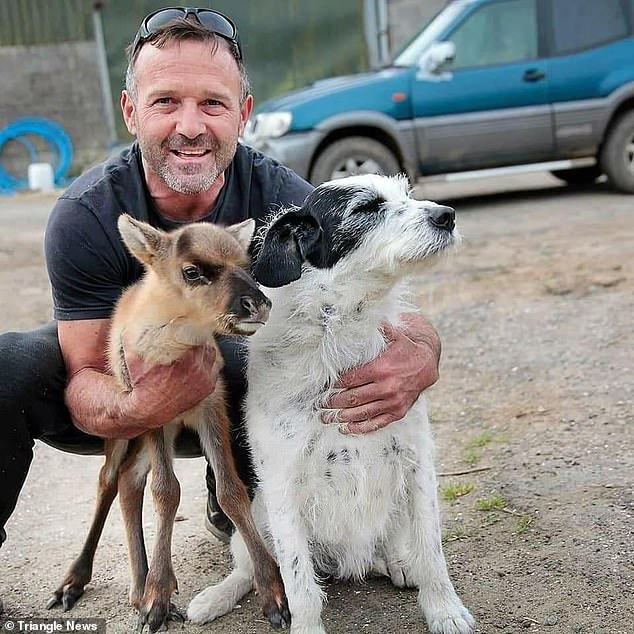 Rob is now concerned about a delay in council planning permission for a shed he needs to keep his growing herds safe from bitter winter cold.

He said: ‘I have needed a new shed for the reindeer for quite some time.

‘It has been with planning permission for almost a year now and I am at my wit’s end with it.

‘I think the council think it’s a money making exercise but it’s not, my reindeer really need another place of shelter and I don’t want them to have another wet winter.

‘It is purely for the welfare of my reindeer. During wet weather they just need a dry place to stay and also somewhere to stay when they don’t want to see people.

One of his reindeer, Buddy, died last month after a visitor gave the animal sweets and bread, not knowing this is lethal to the beasts.

Rob was heartbroken and wrote on his farm website that he was devastated and urged people to listen to advice when visiting the farm.

He believes the death would not have happened had he been granted permission for the shed he requires as Buddy would have been resting there.