British family sell rare drawing by Vincent Van Gogh that was once plundered by the Nazis from its Jewish owner during WWII for £7.4million

A British family has sold a Vincent Van Gogh drawing that was once looted by the Nazis for a record £7.4 million at a New York auction.

The sketch on paper of La Mousme, a famous painting from the Dutch artist in 1888, was plundered by the Nazis from its former German-Jewish owner during World War Two.

The drawing of a French girl led an £18million auction of exquisite art work amassed by the Gibson family over the past 40 years. 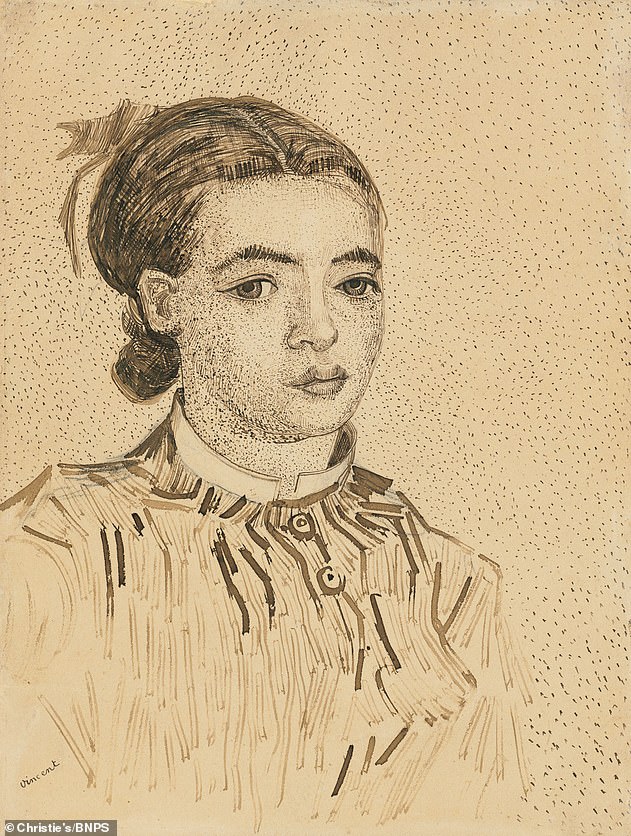 The ‘astonishing’ Van Gogh portrait, titled La Mousme, (pictured) was produced by the Dutch painter in 1888 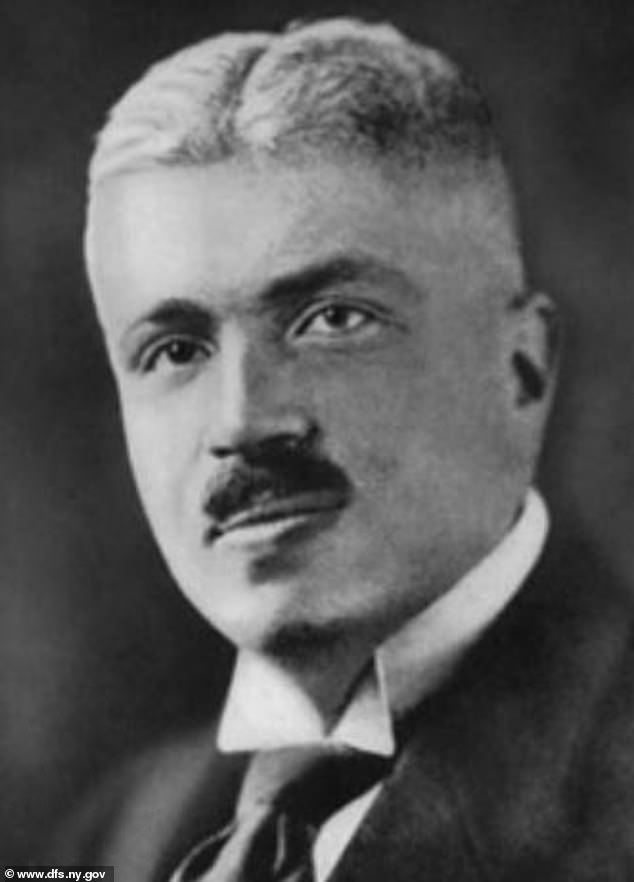 The La Mousme sketch was returned to German-Jewish banker Kurt Hirschland’s family after World War Two. Hirschland had bought the picture in 1920, but it was stolen from him by the Nazis as part of their looting of fine art 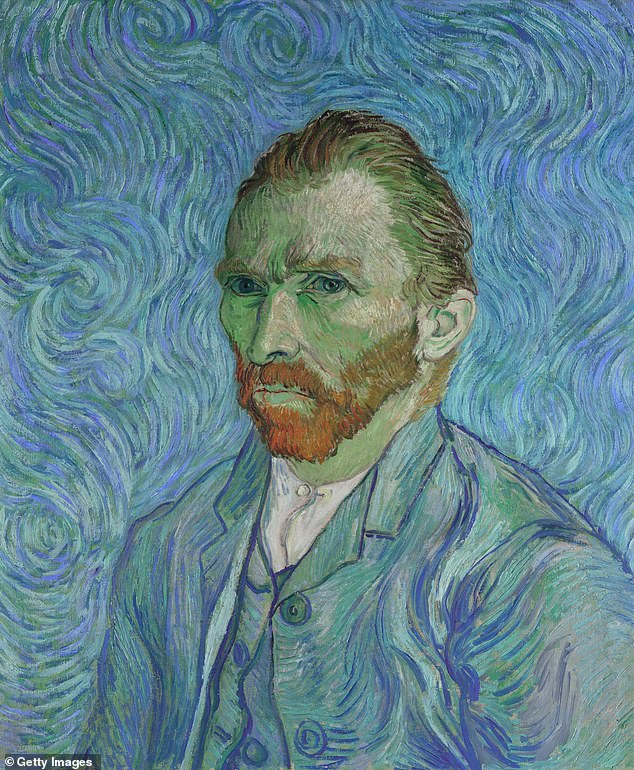 Vincent Van Gogh told his brother, Theo in a letter, that the oil on canvas painting of La Mousme took him a week to finish

It was returned to banker Kurt Hirschland after the war before his descendants sold it to London-based art dealer Thomas Gibson in 1983.

The sketch formed a private collection of some of the finest works of art on paper by artists that included Van Gogh, Lucien Freud, Henry Moore and Henri Matisse.

When he began the collection in the 1970s, Mr Gibson, 77, decided to concentrate on works on paper as he felt they offered better value for money than oil paintings.

He and his sons Miles, Sebastian and Hugh, decided to sell them ahead of a perceived increases in capital gains tax over the next few years.

La Mousme is an oil on canvas painting on display at The National Gallery of Art, Washington D.C.

Van Gogh told his brother, Theo, that the painting took him a week to finish.

The French girl is said to have been inspired by 19th century novel Madame Chrysanthème, by Pierre Loti, which told the story of marriage between a French naval officer and a Japanese woman.

This included £3.3m ($4.6m) for an 1890 conte crayon work by the French artist Georges Seurat depicting a couple by a riverbed at twilight.

It also included £2.25m ($3.1m) for a Henry Moore crayon drawing of two men sleeping in the London Underground during the Blitz.

But the stand out item was the La Mousme sketch, which became one of the highest prices paid for a work on paper by Van Gogh.

It was one of a series of reed pen drawings produced by Van Gogh in 1888 in the artist commune of Arles in the south of France.

It is a drawn copy of his oil painting of the same name that today hangs in the National Gallery of Art in Washington DC.

The drawing, bought by Kurt Hirschland in 1920, is said to be one of the finest works on paper of Van Gogh’s career.

La Mousme was loaned by the Gibson family, who own the Thomas Gibson Fine Art gallery in Mayfair, London, to Tate Britain in 2018.

Mr Gibson said: ‘I started buying important works of art as soon as I could afford to, which was in the mid-70s.

‘I had favourite artists, and I had always been interested in works on paper, and felt that I could get much more value for money in this medium. 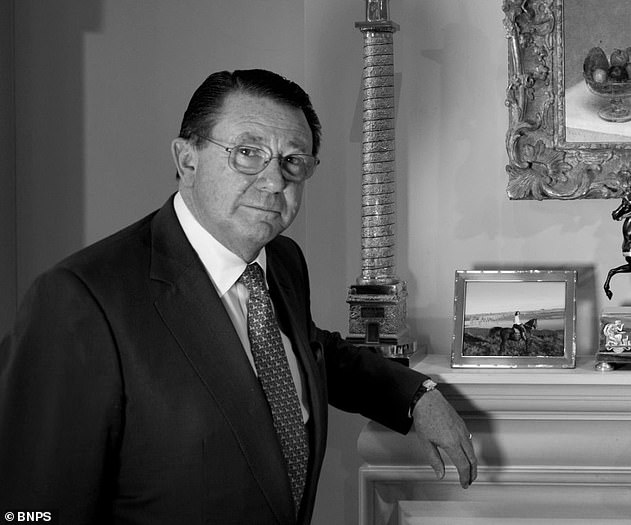 London art dealer Thomas Gibson, 77, (pictured) purchased the La Mousme portrait in 1983 and later loaned it to Tate Britain in 2018 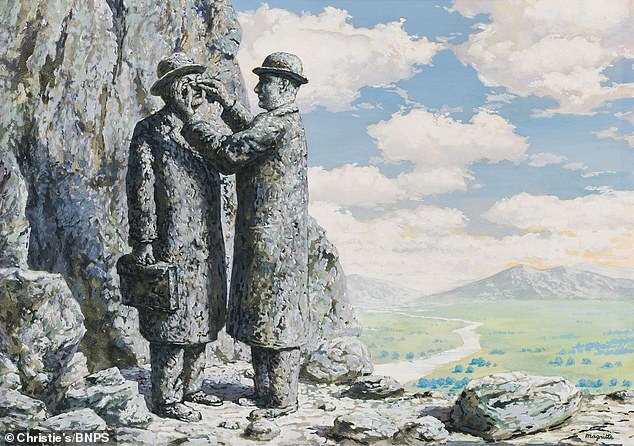 Also included in Mr Gibson’s collection was the 1954 gouache painting (pictured) by Belgian surrealist artist Rene Magritte, which depicts two bowler hatted men who have been turned to stone 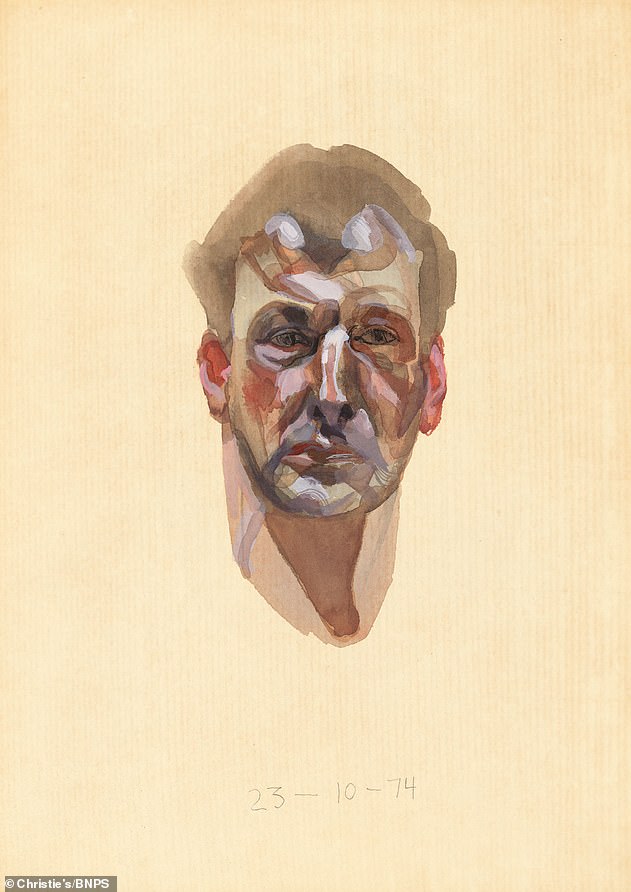 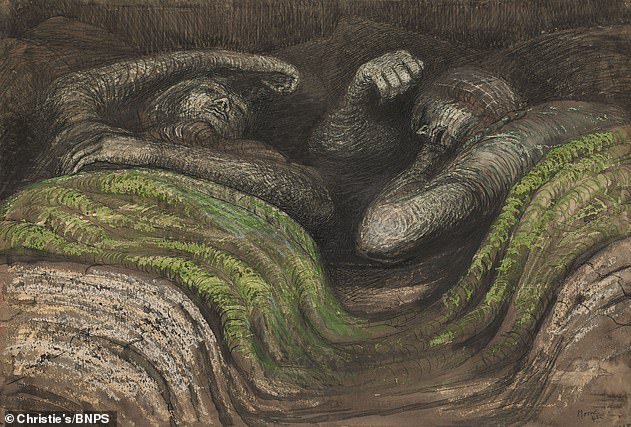 A 1941 work (pictured) by the English artist Henry Moore of two sleeping figures in the London Underground during the war and produced in wax crayon, watercolour and pen and ink sold for £2.25million at the same auction

‘I bought the (Van Gogh) work from Paul and Helen Hirschland in 1983.

‘The simple fact is that it is almost certainly, at least in my opinion, the most significant drawing by Van Gogh in private hands.

The Dutch icon’s painted works have fetched huge sums from art aficionados in the past.

Van Gogh’s revered Portrait of Dr Gachet was once the world’s most expensive painting when it was sold to Ryoei Saito for £59m at a New York auction in 1990.

Nazis began plundering artworks as part of the organised looting of European countries by agents acting on behalf of the ruling Nazi Party of Germany during the time of the Third Reich.

It began with the seizure of property of German Jews, until the end of World War II, particularly by military units known as the Kunstschutz – the German term for the principle of preserving cultural heritage and artworks during armed conflict.

Gold, silver and currency was stolen alongside cultural items of great significance including paintings, ceramics, books and religious treasures.

Many of these items were recovered by agents of the Monuments, Fine Arts, and Archives program (also known as the Monuments Men) on behalf of the Allies immediately following the war.

But hundreds are still missing as continuing international efforts attempt to reunite items to the rightful owners, their families or their respective countries.

He purchased hundreds of paintings stolen during raids of Jewish homes, businesses and art shops in Germany and Nazi-occupied France.

Gurlitt was an ‘official dealer’ for Adolf Hitler and Josef Goebbels and was later found to be a ‘war profiteer’.

He was instructed by other top Nazi officials to collect artwork for Hitler’s ‘Fuhrermuseum’ which was never built.

Over the years he acquired more than 1,500 paintings, including works by Claude Monet, Pierre-Auguste Renoir, Paul Cezanne, Henri Matisse, Henri de Toulouse-Lautrec and Auguste Rodin, giving some to the authorities and keeping others for himself.

After the war, he was questioned by the American Army’s Monuments Men unit but never charged with any crimes.

He lied that the bulk of his collection had been destroyed in the Allied bombing of Dresden in 1945.

He went on to be the Director of the Art Association for the Rhineland and Westphalia until his death in a car crash at the age of 61 in November 1956.

His son Cornelius inherited the collection and tried to sell pieces of to support himself in later life.

He gained worldwide notoriety after a raid of his Munich apartment uncovered more than 1,400 of his father’s stolen paintings in 2012.

But, when he died in the flat two years later, the artworks were discovered.

Speaking of the collection, she added: ‘What unites these works is the lifelong passion of this collector who strove to seek out these treasures. The rarity and condition of these works is incomparable.

‘We are delighted with the very strong result for the exquisite works in the family collection.

‘Quality always wins, and the infallible eye of this collector strove only for exceptional quality.’