Footage of the incident revealed Queen Letizia, today in Britain for a glittering royal ceremony, in a frosty stand-off with the former Queen Sofia. Tensions between the pair erupted at last year’s Easter Mass in the Cathedral of Palma de Mallorca. They showed Queen Letizia, the one time TV newsreader, approach Sofia who had her arms around grandchildren Leonor, 12, and Sofia, 10, as they posed for photos for the media. But Sofia, 79, appeared to berate her daughter-in-law as Letizia tries to take the arm of her eldest daughter.

Footage shows a shove between the rowing pair.

The reason for the public spat, according to royal correspondents, was Letizia’s reluctance for Sofia to have her photo taken with her grandchildren.

Just minutes later Queen Sofia’s niece Marie Chantal of Greece waded into the scandal tweeting to a news report of the clash: “Is this true?”

She followed by angrily tweeted: “No grandmother deserves that type of treatment. Wow she’s shown her true colours.” 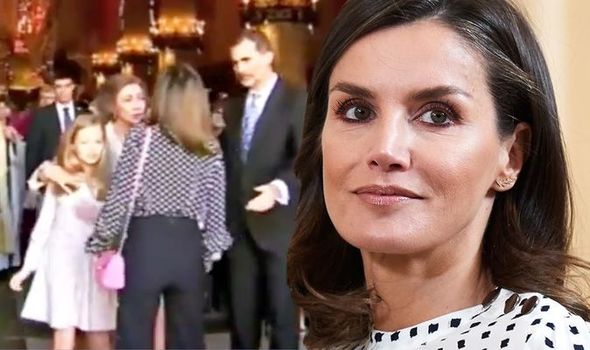 No grandmother deserves that type of treatment. Wow she’s shown her true colours

Marie Chantal, married to Crown Prince Favlos who is is King Felipe’s cousin, finished by posting a family photo in another dig at Letizia and writing: “Happy grandparents! Family is all that matters.”

Queen Letizia appeared to ignore the protestor who later told media she was furious at what happened with Queen Sofia.

A friend of Letizia defended the queen, saying she was merely protecting her children from “intrusive media” and had displayed a “motherly reaction”. 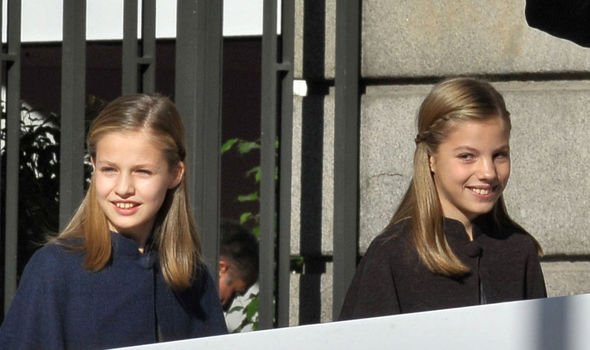 The row and the public reaction marked a crucial point in a love-hate relationship between the Spanish queen and her subjects.

As a journalist before becoming a royal she worked for a number of newspapers during studies.

Once qualified, she worked for Bloomberg, CNN and TVE, and became a regular feature in Spanish households when she became anchor of daily evening news on TVE.

The promotion came in August 2003, just a few months before she became engaged to Felipe.

By then she had divorced from her first husband, the writer Alonso Guerrero Perez, for four years. 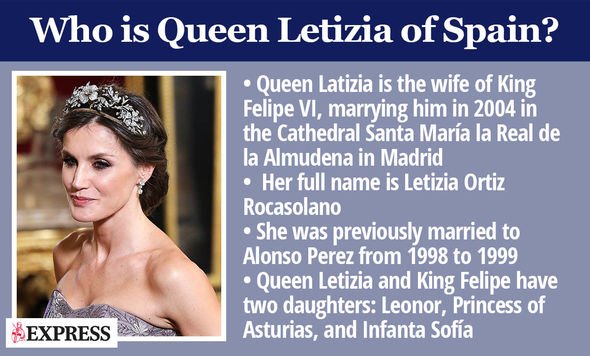 Felipe, then Prince of Asturias, proposed with a 16-baguette diamond engagement ring.

In June, 2014, Letizia was appointed Queen of Spain following the abdication of Juan Carlos I – becoming the first Spanish queen to have been born a commoner.

But two years later Letizia was embroiled in a controversy, when texts supporting a businessman at the time being accused of corruption.

She and the king pledged support to to the financial chief in the texts published by El Diario forcing the palace to state the couple were no longer friends with the him. 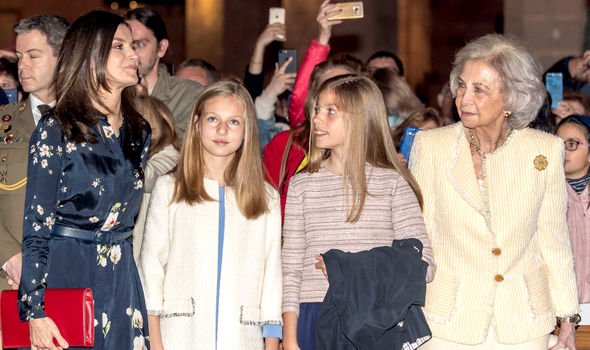 But the 2018 row was a particular low point for Letizia and a huge collapse in a relationship between queen and mother-in-law which was once very supportive.

When Letizia was announcing her engagement she made special acknowledgement of Soria: “From now on, and more and more, I am going to integrate fully in this new life with the responsibilities that come with it and with the support and affection of the king and queen and the priceless example of the queen.”

According to El Pais, the relationship turned sour because of Letizia and Felipe’s daughters.

The newspaper wrote: “Sofia was accustomed to visiting the girls every so often until it was made clear that she was not welcome, given that her presence interrupted the routine of the young girls.

“Despite the fact that the former king and queen and the current monarchs live in houses in La Zarzuela palace separated by just a kilometer, Sofía has complained in small circles of the little contact she has with her granddaughters.”

The publication adds the private row only became public when Letizia refused to let Sofia have her photo taken with her grandchildren.

The spat appeared to damage both the king and queen’s reputation in Spain. Just months after the video a poll found just 35 percent of Spaniards wanting to keep the monarchy compared to 48 percent who wanted a republic.

However, much of that may be down to national controversies, including the uprising in Catalonia, for which Felipe has publicly spoken out against.

Many, however, still laud Letizia, seen as a style icon among European royalty.