Russian President Vladimir Putin has declared that the recent unrest in Kazakhstan was fuelled by ‘bandits and terrorists’ trained abroad, as Kazakh President Kassym-Jomart Tokayev said the country had quelled a coup d’etat.

In a televised statement this morning, Putin alleged that ‘well-organised and well-controlled groups of militants, apparently trained in terrorist camps abroad,’ were involved in the unrest.

Meanwhile, Tokayev said that ‘order had been restored’ after what he described as an ‘attempted coup d’etat fuelled by terrorist aggression’.

Kazakh authorities reported this morning that a total of 7,939 people have been detained and 164 people confirmed dead following mass protests which began on January 2.

The initially peaceful protests against a price hike for Liquified Petroleum Gas (LPG) quickly turned violent and spread across the country last week, with Tokayev tweeting over the weekend that a highly disputed figure of ‘twenty thousand bandits’ had been involved in the uprising in Kazakhstan’s largest city, Almaty.

Both Putin and Tokayev said the demonstrations were instigated by terrorists with foreign backing, though Kazakhstan’s Interior Ministry has released no information thus far about the thousands of people who have been detained.

It comes as Kazakh authorities released well-known Kyrgyz jazz musician Vikram Ruzakhunov, whose arrest and apparent beating over his alleged participation in the unrest sparked outrage in neighboring Kyrgyzstan. 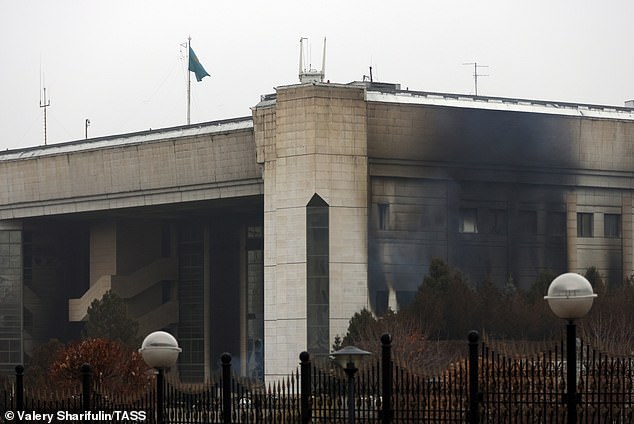 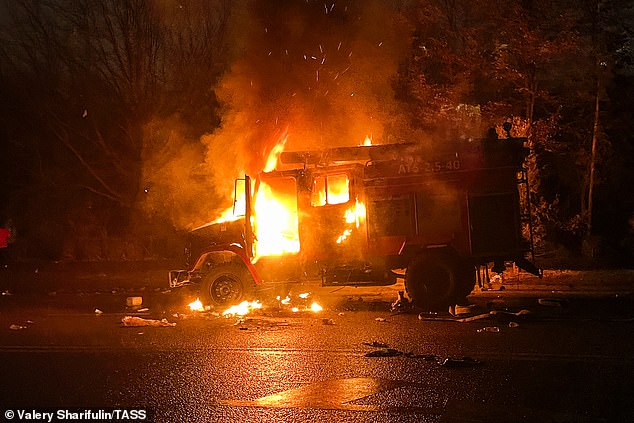 A burning truck is seen by the mayor’s office in Almaty, January 5, 2022. Protests across Kazakhstan turned violent last week and led to dozens of deaths and thousands of protestors being detained 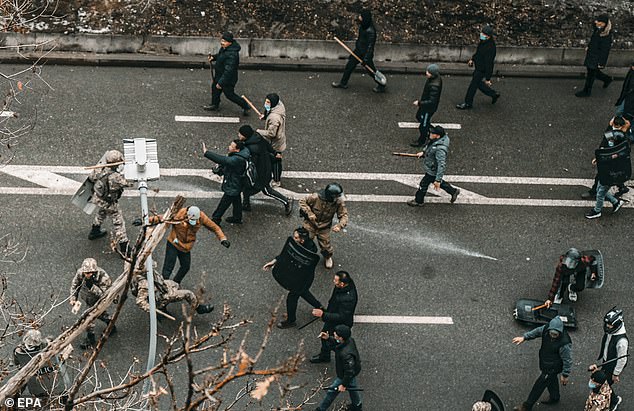 Protesters clash with Kazakh policemen during rally over a hike in energy prices in Almaty, Kazakhstan, January 7, 2022 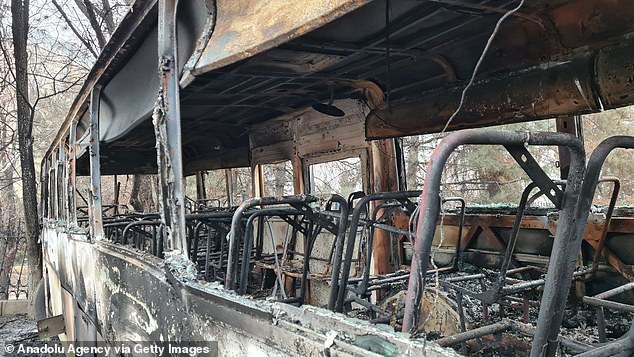 A photo shows the twisted remnants of a burnt-out bus in the aftermath of protests in Almaty, Kazakhstan, on January 9, 2022 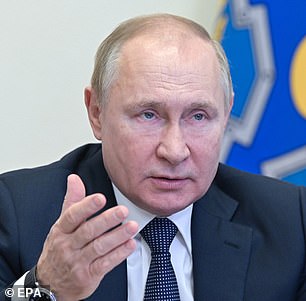 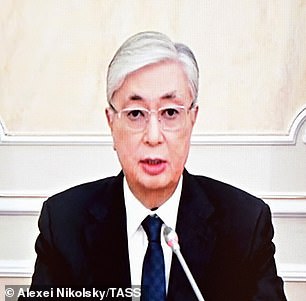 In a televised statement this morning, Putin (L) alleged that ‘well-organised and well-controlled groups of militants were used, apparently trained in terrorist camps abroad.’ Meanwhile, Tokayev (R) said that ‘order had been restored’ after an ‘attempted coup d’etat fuelled by terrorist aggression’

Although last week’s protests began over a near-doubling of prices for a type of LPG that is widely used as vehicle fuel, their size and rapid spread suggested they reflect wider discontent in the country, which has been under the rule of the same party since gaining independence from the Soviet Union in 1991.

In a statement on Monday morning, Kazakhstan’s Foreign Ministry said that peaceful protests throughout the country ‘were hijacked by terrorist, extremist and criminal groups.’

‘According to preliminary data, the attackers include individuals who have military combat zone experience in the ranks of radical Islamist groups. Currently, the law enforcement agencies and armed forces of Kazakhstan are confronting terrorists, not `peaceful protesters’ as some foreign media misrepresent it,’ the statement said.

Speaking at a virtual summit of the Collective Security Treaty Organisation (CSTO) this morning, Tokayev promised to reveal to the world ‘additional evidence’ of a ‘terrorist aggression’ against Kazakhstan.

He stressed that the demands of peaceful protesters have been ‘heard and met by the state,’ and the unrest that followed involved ‘groups of armed militants’ whose goal was to overthrow the government.

Kazakh authorities declared a day of mourning for the dozens of civilians who were killed in the uprising along with several members of Kazakh security personnel.

What is the CSTO?

The Collective Security Treaty Organisation (CSTO) was formed by Russia and other former Soviet states  in 2002, months after a US-led coalition intervened in Afghanistan following the September 11, 2001 attacks.

It groups together some of the signatories – Russia, Belarus, Armenia, Kazakhstan, Kyrgyzstan and Tajikistan – of a 90s-era security pact among former Soviet republics.

Russia’s President Vladimir Putin said at the time that ‘we are living in a fast-changing world and therefore have to reinforce the treaty linking us and to adapt it new threats.’

The bloc founded a 20,000-strong rapid reaction force in 2009, while its 3,600-member peacekeeping unit is recognised by the UN.

Pascal Ausseur, a French former soldier and senior defence official who now heads the FMES think-tank, called the CSTO a ‘mini-NATO… with Russia in place of the US on the other side’.

The deployment of CSTO troops in Kazakhstan in January 2021 represents the first time the CSTO has committed forces to quell any unrest in one of its member states.

Russian President Vladimir Putin Tokayev’s sentiments, labelling the unrest ‘an attack on the country’ and ‘an act of aggression’ masterminded from abroad.

‘We understand that the events in Kazakhstan are not the first and not the last attempt at interfering in the internal affairs of our states from the outside,’ Putin said at the summit.

The Russian President also said that the CSTO, which dispatched 2,500 troops to quash the uprising in Kazakhstan, would not allow any more ‘colour revolutions’ to take place – a reference to several revolutions in ex-Soviet countries over the last two decades.

Meanwhile, the arrest of Kyrgyz jazz musician Vikram Ruzakhunov amid the protests in Almaty led dozens of people to rally outside Kazakhstan’s embassy in Kyrgyzstan’s capital, Bishkek on Sunday.

Ruzakhunov was shown this weekend in a video on Kazakh television and YouTube – which has since been removed – saying that he had flown to the country to take part in protests and was promised $200 for doing so.

In the video, which appeared to have been filmed police custody, Ruzakhunov’s face was bruised and he had a large cut on his forehead, leading to suspicions his admission was forced under duress.

Kamchybek Tashiyev, head of the Kyrgyz State Committee for National Security, told reporters at the protest: ‘[Ruzakhunov] is not a terrorist. He’s an ordinary citizen, a musician, a decent man.

Kyrygzstan’s Foreign Ministry demanded Ruzakhunov’s release, and the country’s authorities may now look to open a probe on charges of torture despite news of his release today. 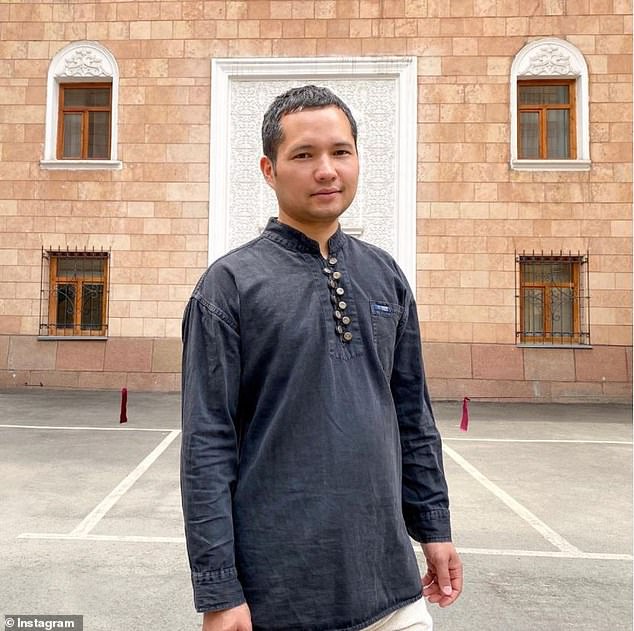 The arrest of Kyrgyz jazz musician Vikram Ruzakhunov (pictured) amid the protests in Almaty led dozens of people to rally outside Kazakhstan’s embassy in Kyrgyzstan’s capital, Bishkek on Sunday 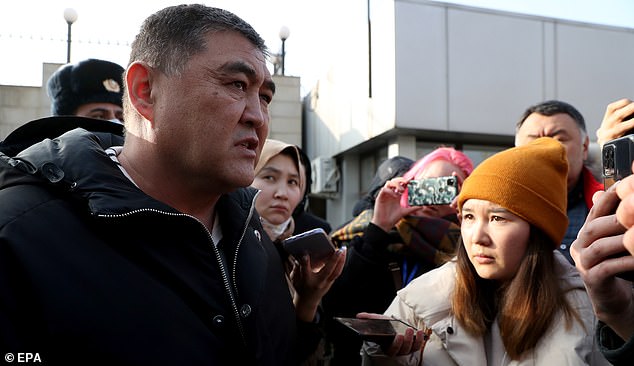 Kamchybek Tashiev (L), chairman of the Kyrgyz State Committee for National Security (GKNB), is pictured at a rally outside the Kazakh embassy in Kyrgyzstan protesting the arrest of famous jazz musician Vikram Ruzakhunov

The arrest of Kyrgyz jazz musician Vikram Ruzakhunov amid the protests in Almaty led dozens of people to rally outside Kazakhstan’s embassy in Kyrgyzstan’s capital, Bishkek on Sunday (pictured)

The aftermath of the unrest in Kazakhstan comes amid talks between Russia and the West regarding the escalating tension in eastern Europe and Ukraine.

Russia said on Sunday it would not make concessions under US pressure and warned that this week’s talks on the Ukraine crisis might end early, while Washington said no breakthroughs were expected and progress depended on de-escalation from Moscow.

Talks begin today in Geneva before moving to Brussels and Vienna, but the state-owned RIA news agency quoted Deputy Foreign Minister Sergei Ryabkov as saying it was entirely possible the diplomacy could end after a single meeting.

‘I can’t rule out anything, this is an entirely possible scenario and the Americans… should have no illusions about this,’ he was quoted as saying.

‘Naturally, we will not make any concessions under pressure’ or amid constant threats from participants in the talks, said Ryabkov, who will lead the Russian delegation in Geneva.

Meanwhile, US Secretary of State Antony Blinken said in a CNN interview: ‘I don’t think we’re going to see any breakthroughs in the coming week.’

In response to Russian demands for Western security guarantees, the United States and allies have said they are prepared to discuss the possibility of each side restricting military exercises and missile deployments in the region.

Both sides will put proposals on the table and then see if there are grounds for moving forward, Blinken said.

‘To make actual progress, it’s very hard to see that happening when there’s an ongoing escalation, when Russia has a gun to the head of Ukraine with 100,000 troops near its borders,’ Blinken said in an interview with ABC News. 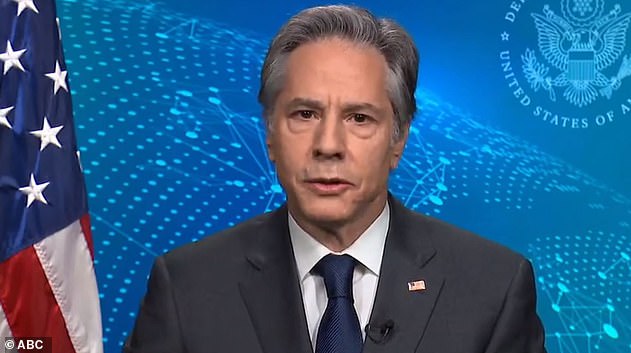 Secretary of State Antony Blinken does not expect breakthroughs this week in US-Russia security talks, but hopes to find some common ground amid the crisis in Ukraine 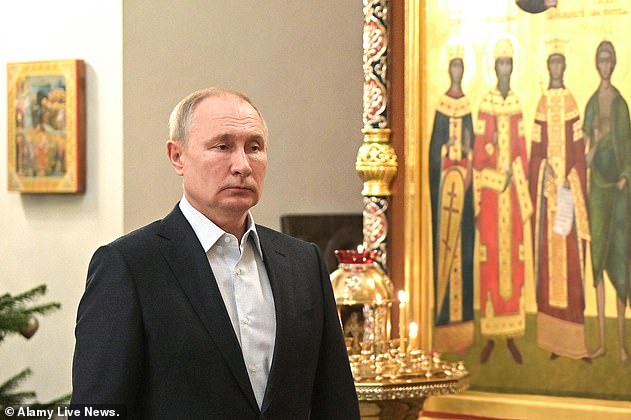 Delegations from the US and Russia will hold talks Sunday night and Monday in Geneva, a move that will kick off a week of diplomacy between Russia and the West 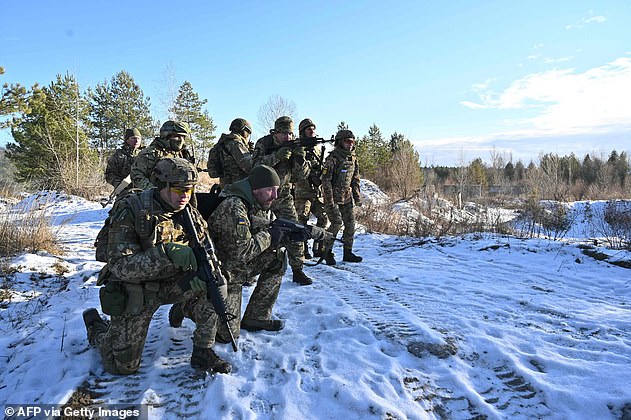 Tens of thousands of Russian troops are gathered within reach of the Ukraine border in preparation for what Washington and Kyiv say could be an invasion. Russia however is asking for security guarantees that Ukraine would not be able to join NATO as this would allow the West to deploy more military power along Russia’s border (Pictured: Ukrainian Territorial Defense Forces on December 25, 2021)