ENGLAND'S chief medical officer says ministers have pushed the easing of lockdown "to the limit" – just a fortnight after Boris Johnson said he hoped we could be back to normal by Christmas.

Less than two weeks after the Prime Minister said we could be gathering around the Christmas table with family and friends, cases have soared. 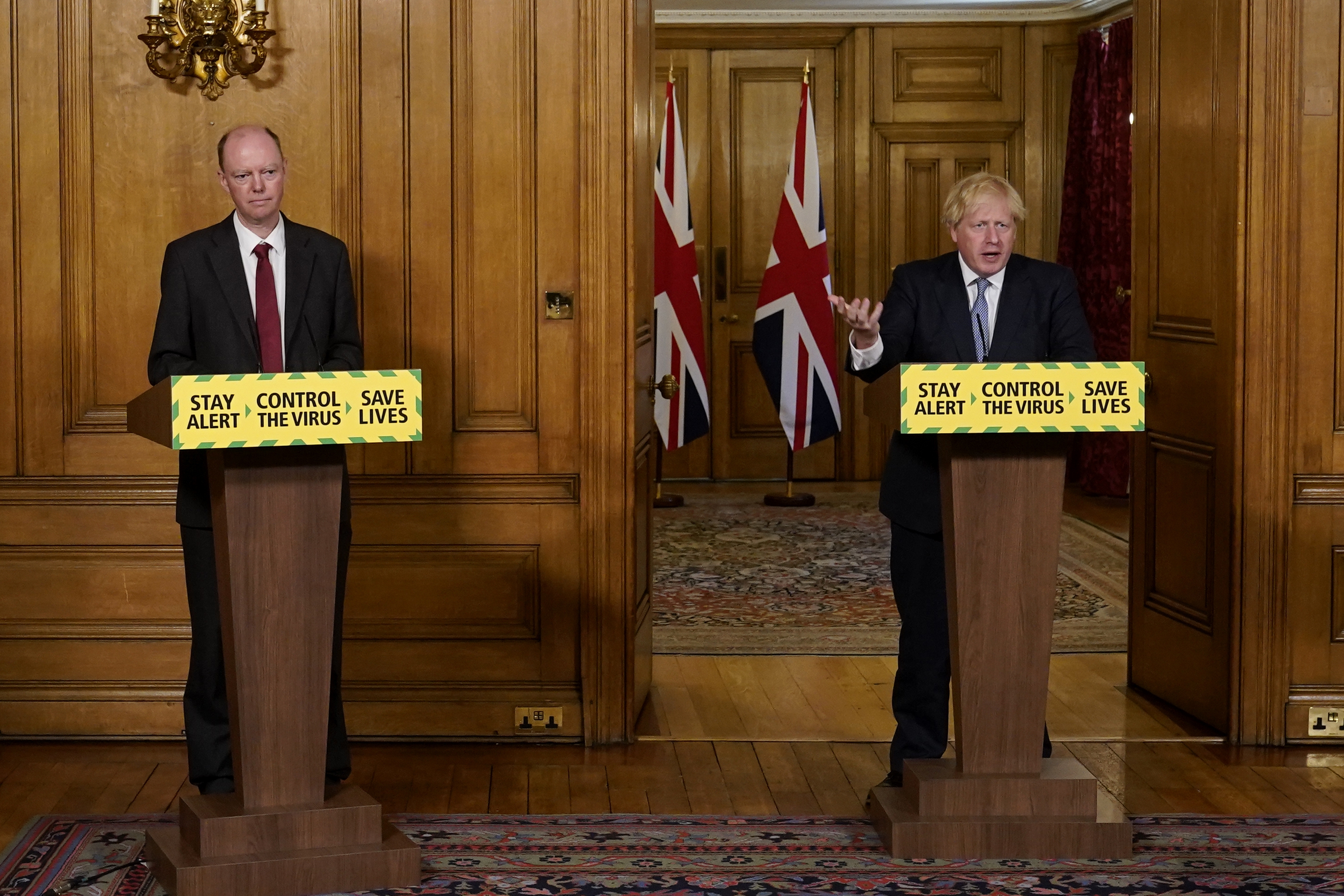 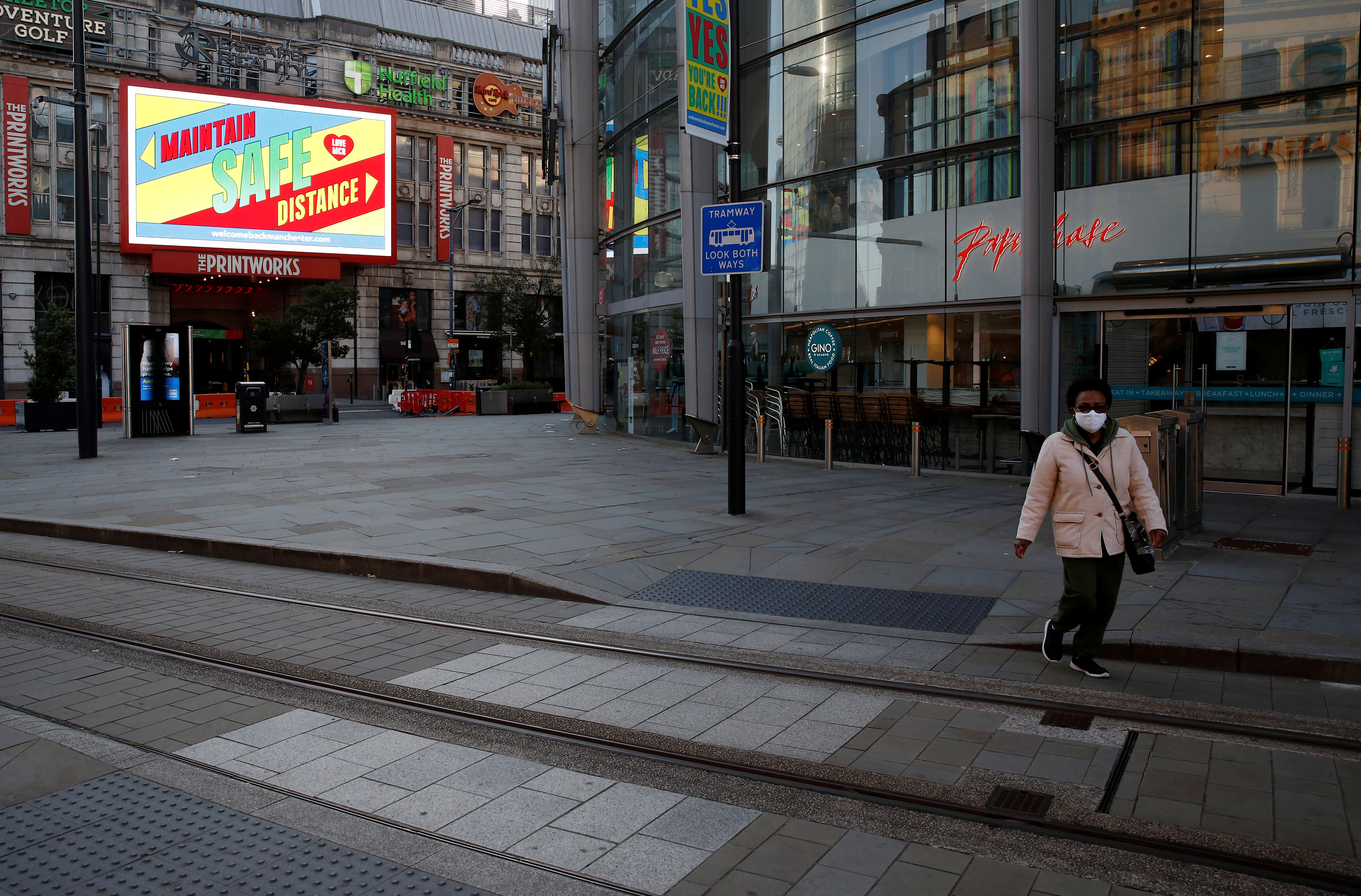 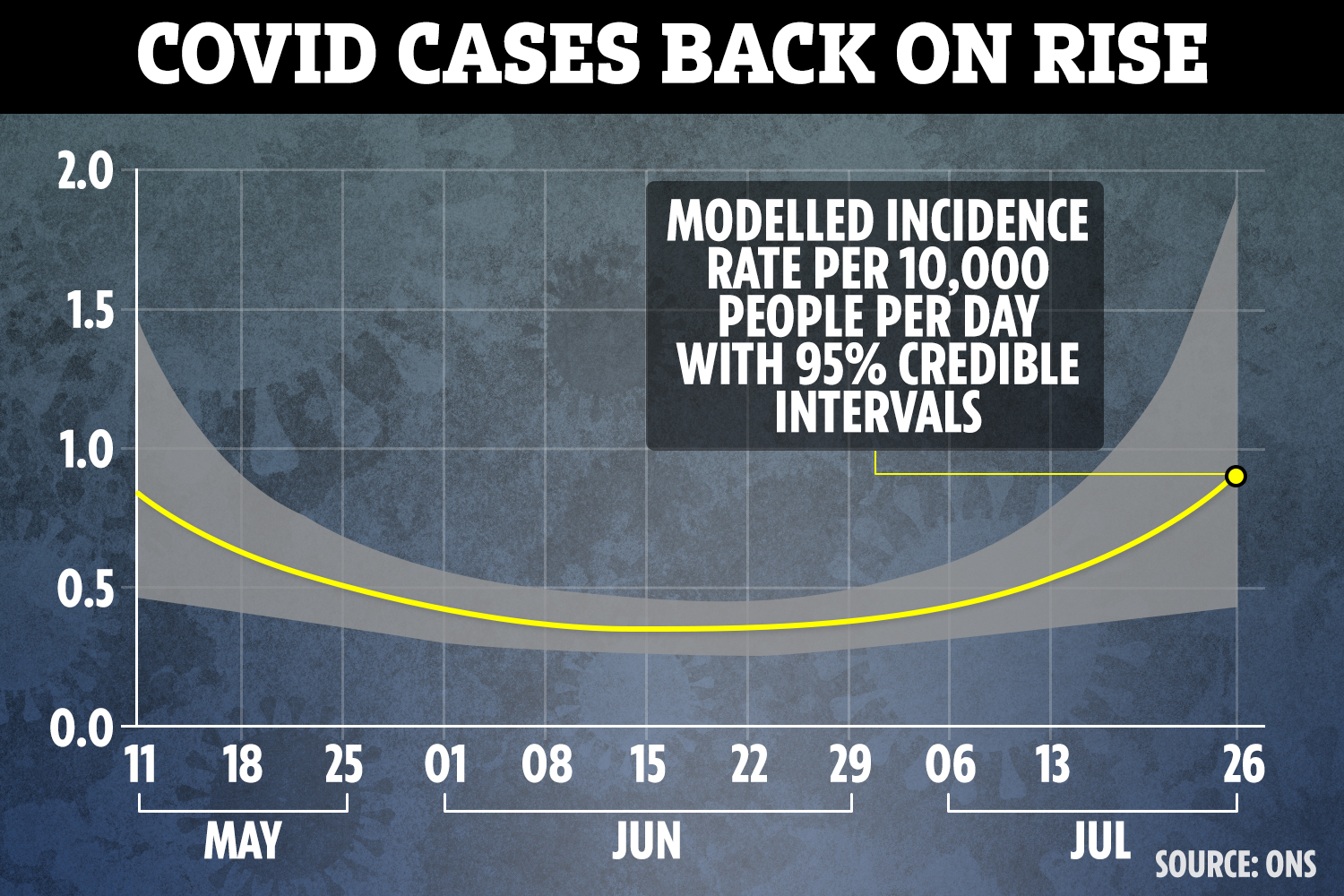 Mr Johnson has today put the brakes on loosening lockdown laws, banning a series of businesses from opening tomorrow and writing off weddings.

And Professor Chris Whitty has warned that relaxing rules further will "absolutely, inevitably" lead to a resurgence of the virus.

The expert says further relaxation of the rules must be "stopped now" – and maybe "pulled back a bit" – after virus cases in the UK more than DOUBLED in just two weeks.

Mr Johnson has warned he could widen the local ban on friends and family to other areas after cases soared by 63 per cent in a fortnight.

The PM hit the brakes on easing the coronavirus lockdown – saying he wouldn't "stand by and allow the virus to cause more pain and heartache in this country".

Prof Whitty said: "This is a situation where if we go beyond a certain point, in terms of people getting together, linking up households, the rates of this virus will start to increase.

"So this is really within our hands as a society for how we're going to respond to this.

"We either say, 'Actually, we've probably taken this to the limit, we've got to stop now and we may have to pull back a bit to keep this under control', or we do not.

"If we do pull back, then we should be able to hold the line, and if we do not pull back and we start having further interactions, then we can expect to see an increase in cases with all the consequences that go with that."

The Prime Minister today announced that most of the measures which were to be lifted tomorrow will now be put on ice for two weeks.

He also hinted at backtracking the easing of lockdown even further.

It comes after new rules banning households from meeting each other in homes were announced for Greater Manchester, parts of East Lancashire and parts of West Yorkshire overnight.

Speaking from Downing Street, Mr Johnson said: "At this stage, we are not changing the rules on social contact nationally.

"I don’t want to tell people to spend less time with their friends.

"But unless people follow the rules and behave safely, we may need to go further."

During the strict lockdown months, Brits were told not to socialise with anyone in their households.

It wasn't until the end of May that the government confirmed households could meet in an outdoor space in a group of up to six people.

But ONS figures show there are 4,900 new cases being recorded every day

It's thought to be in what appeared to be the "first rise since the end of May".

The PM said Brits needed to remain vigilant, saying: "With those numbers creeping up, our assessment is that we should now squeeze that brake pedal in order to keep the virus under control.

"We must keep our focus and we can't be complacent."

The Prime Minister also warned that there would be a "greater police presence" to ensure face coverings were being worn when required.

In addition, Brits will now have to wear a face mask in cinemas, while sports fans will also not be allowed to return to live events.

The PM said: "As we see these rises around the world, we cannot fool ourselves that we are exempt.

"We must be willing to react to the first signs of trouble."

Further guidance is expected to be published in the coming days. 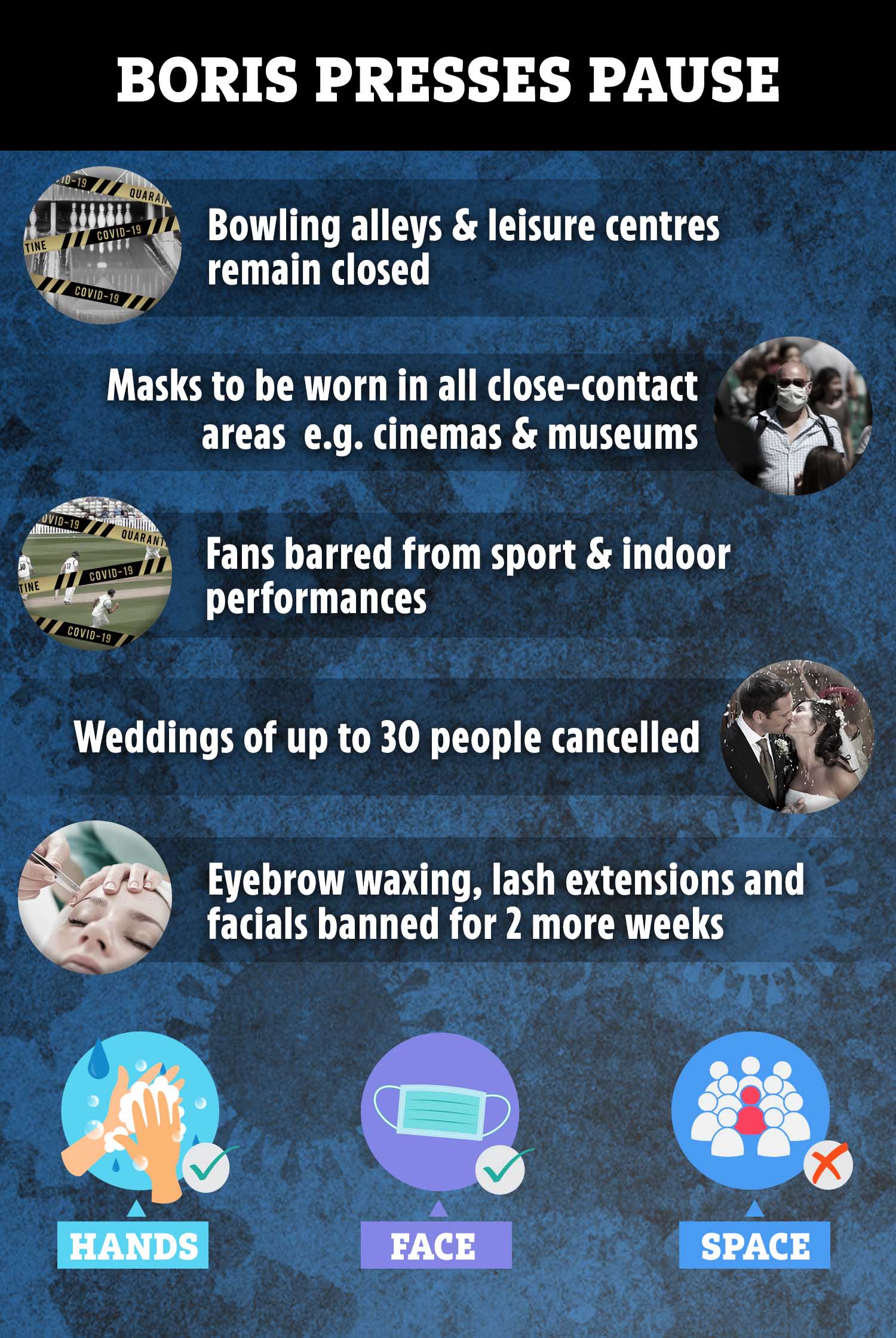 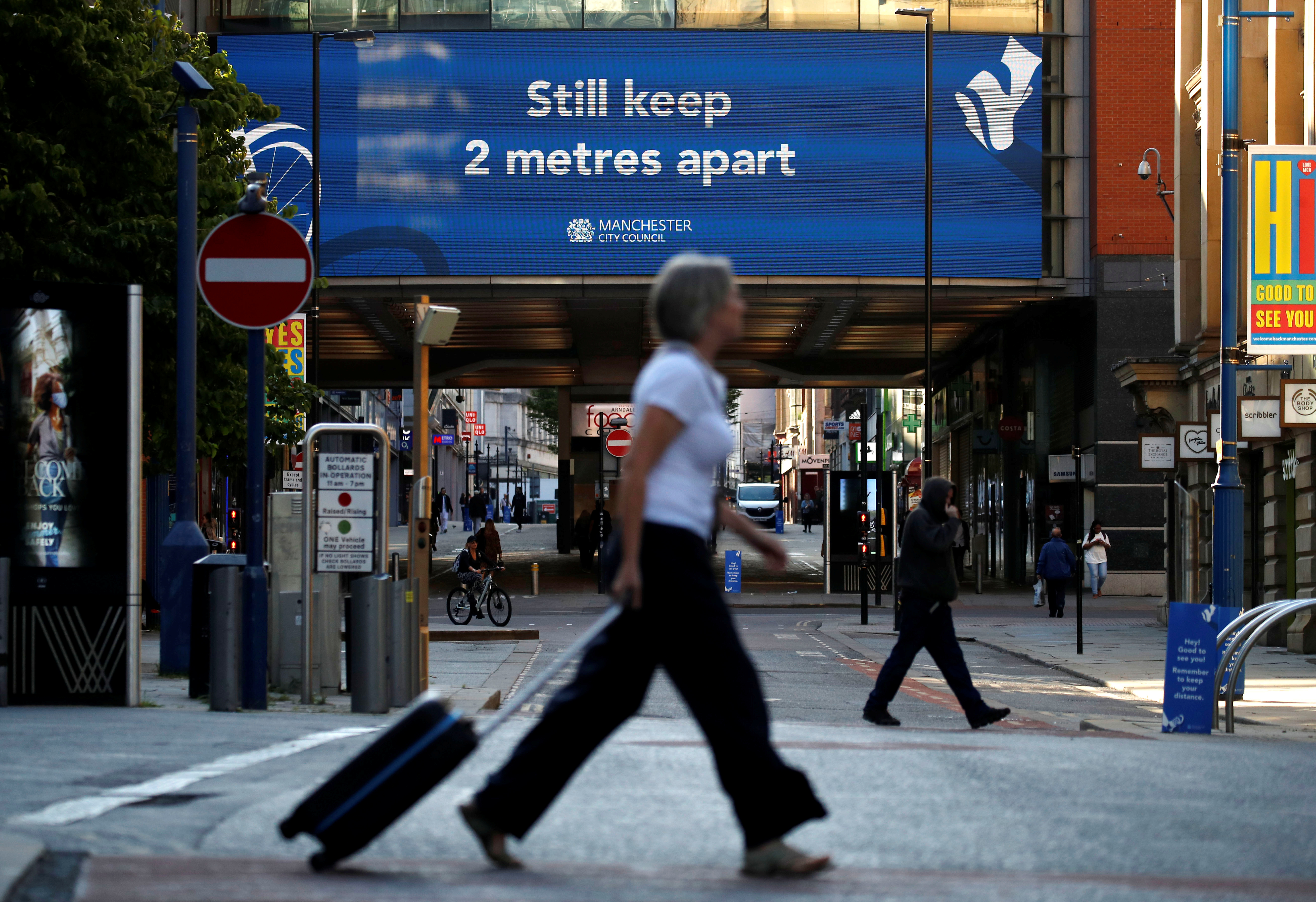 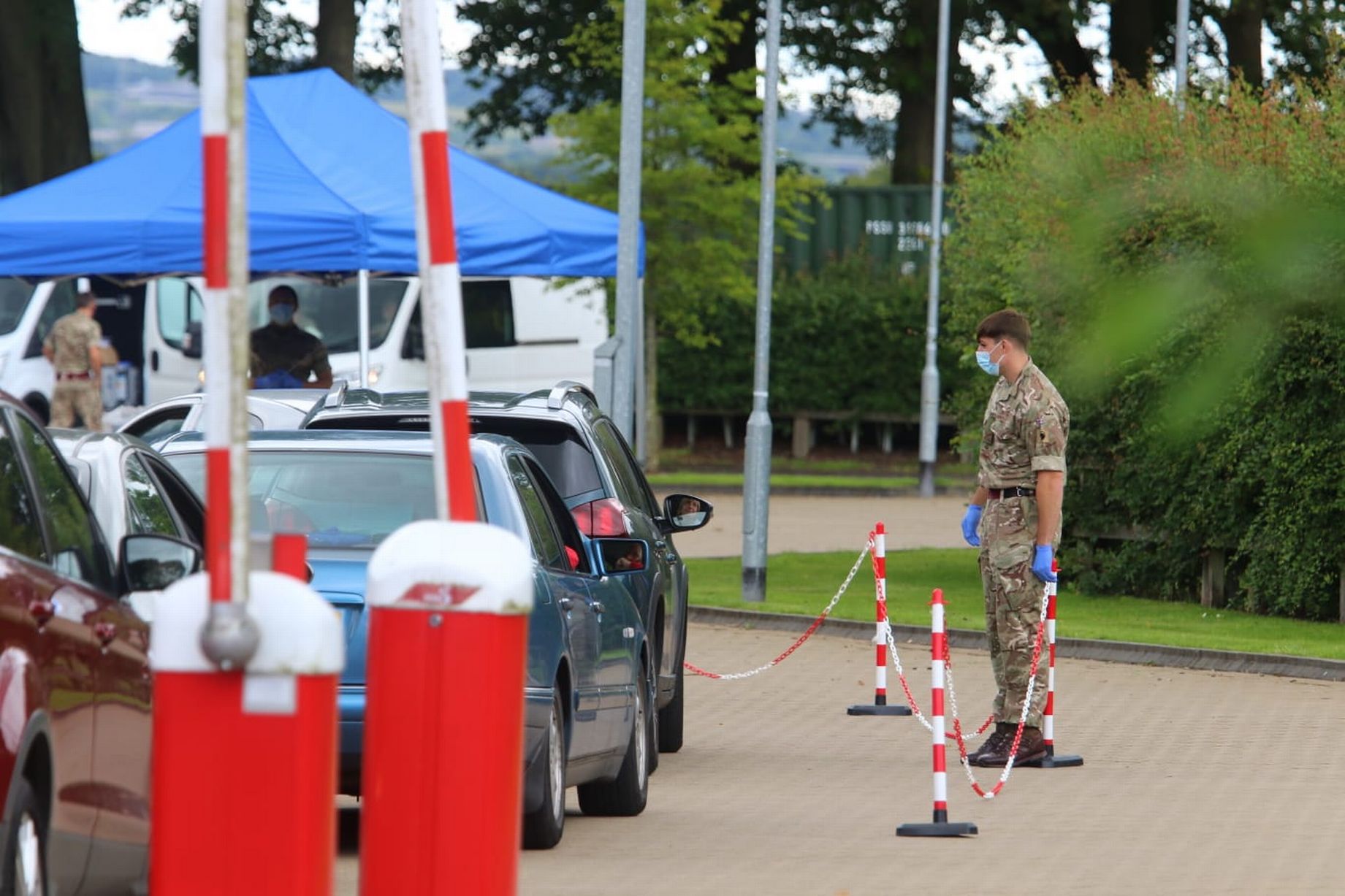 Brits had been left confused after 4.5million people were issued with fresh lockdown demands with just three hours' notice.

The government revealed at 9.16pm that households in Greater Manchester, parts of East Lancashire and parts of West Yorkshire were banned from meeting each other indoors from midnight last night.

The sudden new rules – which mean that people can still go to work and even visit shops and cafes but cannot go inside other homes – have left the public reeling.

Health Secretary Matt Hancock himself today appeared muddled by the new guidelines, suggesting on BBC Breakfast that households in the lockdown area could visit those outside of the impacted regions – contradicting the official advice.

According to the guidelines published this morning, it is illegal for people who are in the affected region to visit other homes regardless of whether it is in or out of the restricted area.

What the new rules mean:

The affected areas include all of the 2.8million residents of Greater Manchester, as well as the Lancashire towns of Blackburn, Burnley, Hyndburn, Pendle and Rossendale.

Leicester was also included in the households ban, but pubs, restaurants and hairdressers will reopen on Monday.

Last week we told how Blackburn overtook Leicester to become Britain’s coronavirus hotspot after cases doubled in just one week.

Meanwhile in Bournemouth beach, police are today on standby to set up roadblocks to prevent a repeat of chaotic scenes of crowded seasides.

A major incident had been declared at Bournemouth last month as people packed onto the beach, with plans now in place to cope with another potential surge. 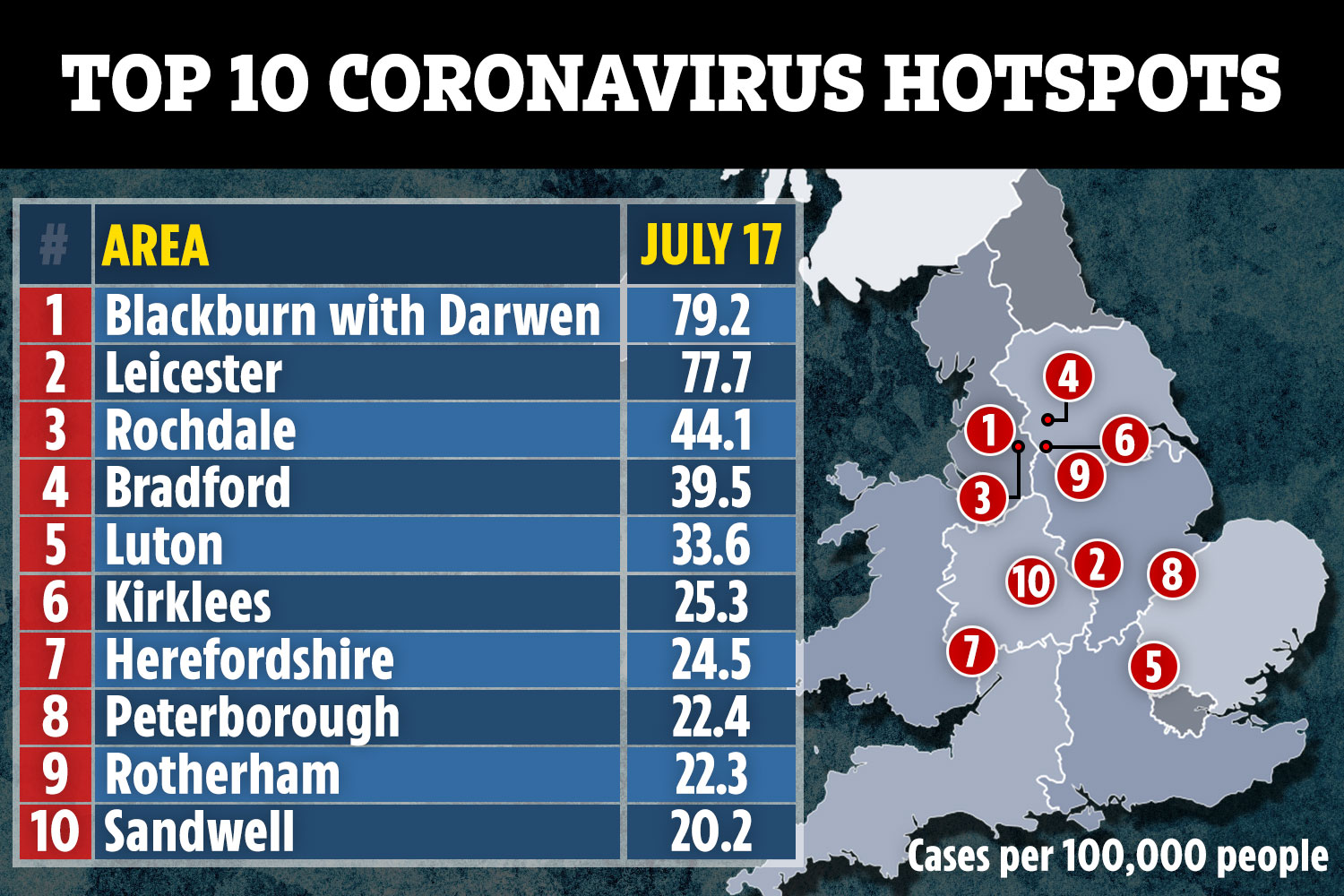 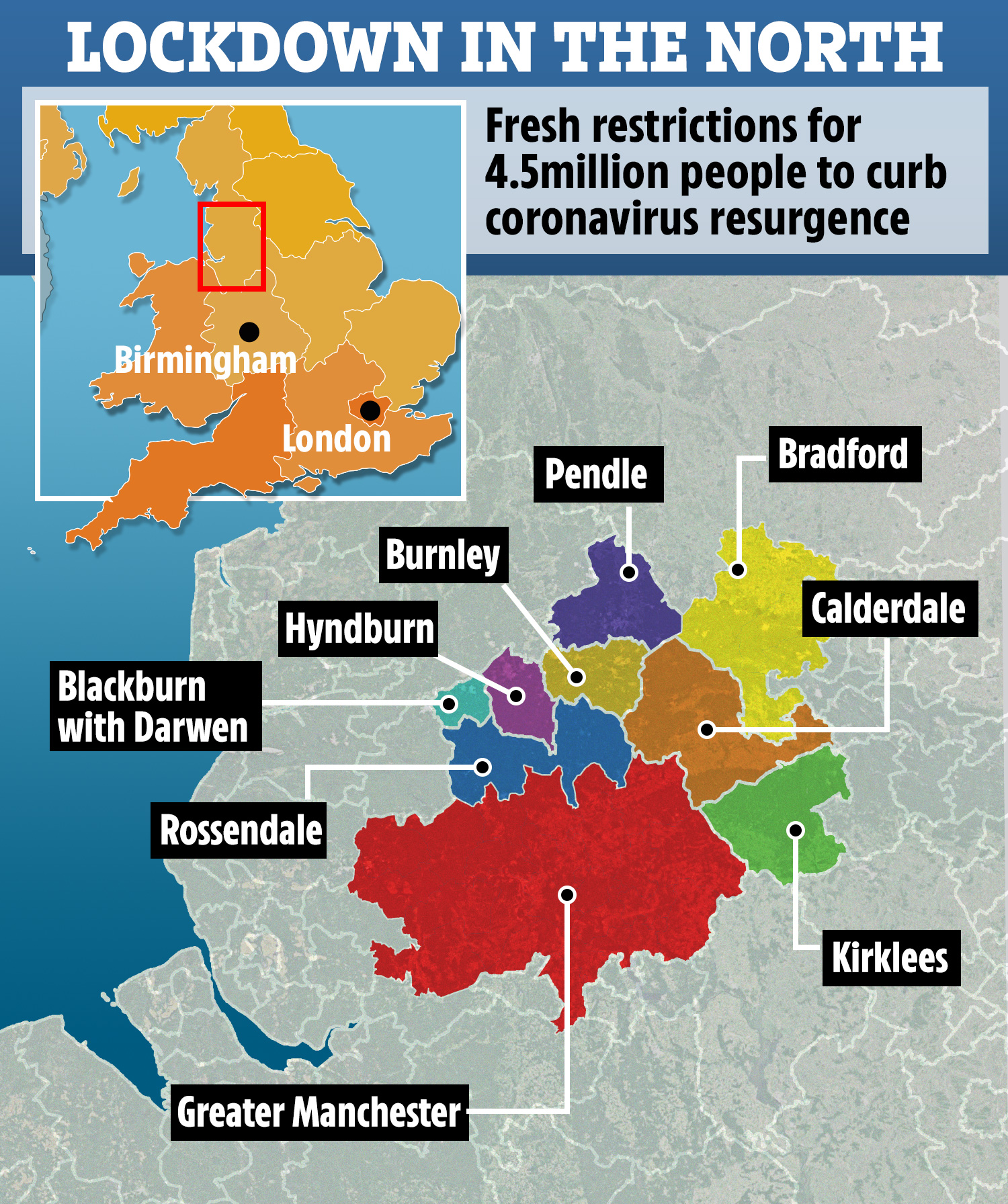