Managua: Political violence broke out at a Roman Catholic church in the Nicaraguan city of Masaya on Thursday (Friday AEDT) as government sympathisers attacked parishioners with clubs, machetes and metal bars. 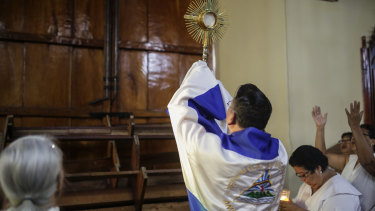 Father Harvey Padilla exposes the consecrated host to one of the barricaded doors of the San Juan Bautista Church after supporters of President Daniel Ortega attempted to enter the church by force.Credit:AP

The attack came after it became known that San Juan Bautista parish priest Harving Padilla planned to lead a procession to another church a few blocks away in solidarity with that church's priest and a dozen people who are on hunger strike there to demand the release of loved ones they say are political prisoners.

Padilla said the crowd surrounded his church while Mass was being celebrated inside and tried to break through the doors, and priests and parishioners blocked the entrances with pews.

"They came with pipes and machetes, they beat the altar boys and a woman and they had us surrounded in here," Padilla said.

A 50-year-old man who tried to keep the attackers out was beaten by several people who then handed him over to police, who had stood guard during the disturbance with the support of anti-riot forces but did not intervene. 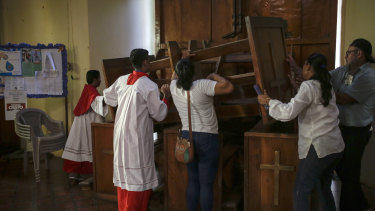 Altar boys and parishioners barricade one of the entrances of the San Juan Bautista Church as people outside try to enter by force.Credit:AP

Nicaragua has been on edge since protests erupted in spring 2018 demanding President Daniel Ortega leave office and allow early elections. Ortega officials consider such demands tantamount to an attempted coup by people they label "terrorists."

Last week the hunger strike began at the San Miguel Arcangel church by family members of government opponents detained after protesting against Ortega.

That same day more than a dozen activists were arrested as they tried to deliver water to the demonstrators. They were later charged with alleged illegal transportation of weapons.

This week government-allied forces tried to break into the San Miguel church, while others caused disturbances inside the cathedral of Managua, the capital, forcing another group of women to suspend a separate hunger strike they planned to stage there.

The government of Ortega and Rosario Murillo, his Vice-President and first lady, have accused a number of bishops and priests of supporting the political opposition.

Nicaraguan media said the health of at least three hunger strikers at the San Miguel church has deteriorated.

Water and electrical service to the building has been cut off for days, and it has been surrounded by police.

The strikers asked for a presence by the International Committee of the Red Cross, but ICRC spokesman for Mexico and Central America Alberto Cabezas said that the organisation as a rule does not intervene in negotiations related to hunger strikes.

Cabezas said the ICRC "urges support for reaching solutions in which no lives are lost."

The US State Department expressed concern over the protesters' health and safety and called the police cordon unacceptable.

At least 328 people died in a crackdown on last year's protests by security forces and armed pro-government militias, according to the Inter-American Commission on Human Rights. Some 2000 were wounded, and tens of thousands fled to exile.