Police in Portland, Ore., declared a riot around 11 p.m. local time Saturday as Independence Day marked the 38th consecutive day of civil unrest in the city.

Later, around 1 a.m. Sunday local time, a large crowd was seen marching near the the Multnomah County Justice Center, the federal courthouse where rioters and protesters frequently gather.

Other videos showed graffiti painted on downtown buildings and showed a fire burning as a crowd gathered.

Rioters had been ordered to leave the downtown area ias police moved in against the crowd, OregonLive.com reported.

About 10:30 p.m. local time, police ordered the crowd to stop directing fireworks toward the justice center. 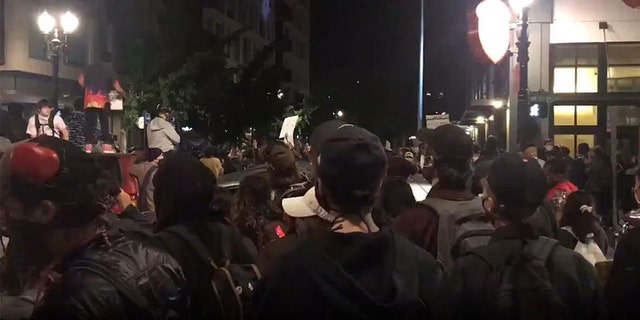 A crowd is seen in Portland, Ore., during a recent demonstration.

Portland Mayor Ted Wheeler posted a series of tweets Friday, calling for calm — but his requests appeared to go unheeded.

On Saturday night, police tried to disperse the crowd using some type of smoke device, the newspaper reported. They ordered people away from the courthouse and warned they could be subject to arrest.

Unrest in Portland and other cities has continued since the May 25 death of George Floyd in police custody in Minneapolis. The death set off demands for more police accountability, including the “defund the police” calls for cities to slash police department budgets – or even eliminate police departments.