Police have tackled a number of men to the ground in North Melbourne after an anti-lockdown and vaccination protest in downtown Melbourne turned violent.

At least five men were arrested, with one man bleeding from the head and police deploying OC spray during the scuffle with protesters on Victoria Street. 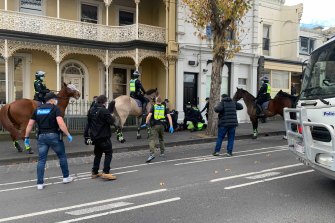 A number of men were brought to ground by police during an anti-lockdown protestCredit:Ashleigh McMillan

All gatherings, including protests, are banned under Victoria’s lockdown restrictions as the state grapples with a fresh outbreak of coronavirus.

A heavy police presence surrounded the gardens where about 50 protesters against vaccinations and Victoria’s seven-day lockdown gathered at noon.

One woman who was detained by police outside Queen Victoria Market. 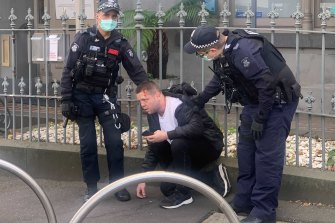 A bleeding man is treated after violence between a small group of protesters and police.Credit:Ashleigh McMillan

She was heard yelling: “I will never stop fighting for my rights and my freedoms” and “COVID is a hoax, do you think your mask is protecting you?”

Another man who was holding an Australian red ensign flag was marched through the park by police before he was detained and his information was taken.

Police were seen checking IDs and escorting protesters back to their cars on Saturday.