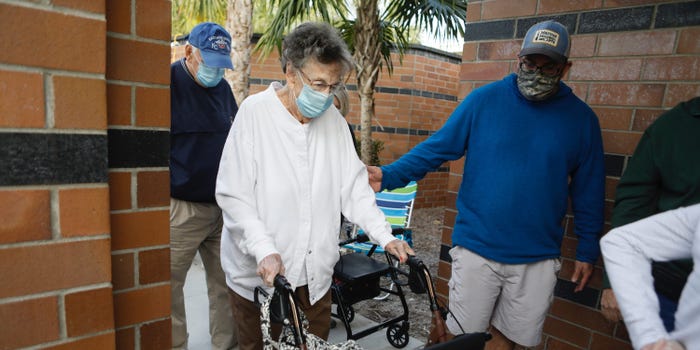 Photos and videos show hundreds of senior citizens camping overnight to get the COVID-19 vaccine in a Florida county this week after doses became available to the public.

The long lines occurred in Lee County, where health officials sent out a press release on Sunday saying doses of COVID-19 vaccine in the county would be available on a first-come, first-serve basis to high-risk healthcare workers and people 65 years old and over.

In the hours and days that followed, hundreds of elderly people — some of whom were in their 90s — lined up outside several vaccination sites across the county, WZVN-TV and News-Press, a local Florida newspaper, reported.

Many of them spent nights outside, in temperatures that dropped as low as 47 degrees Fahrenheit.

Photos from the scene show people sitting in chairs and covered in blankets as they waited outside for hours hoping to get the vaccine:

A 67-year-old woman from Fort Myers who got the first dose of the Moderna COVID-19 vaccine at Fort Myers Stars Complex on Tuesday told Insider she arrived at the vaccination site at 3 a.m., and brought a sleeping bag and winter clothes to stay warm.

"It intrigued me from the beginning, and I'm a science and math person," the woman, who asked to withhold her name publicly out of privacy, told Insider of getting the COVID-19 vaccine. "I'm an early adopter. I know that it's in me to basically go and do something like this."

She said she took the vaccine because she wanted to see her two sons, and that she wanted to get back to work in the travel industry.

"I'd love to see my family and not be afraid that they'd give it to me and kill me. I would not want them to live that," she said.

Most sites hit capacity before 7 a.m. each day

It remains unclear how many people waited in line at the vaccine sites each night, but Tammy Yzaguirre, the public information officer for Florida Department of Health in Lee County, told insider that 2,865 vaccines were administered on Wednesday, and at some locations, people had started lining up at 2 p.m. on Tuesday.

It's also unclear how many vaccines were administered on Monday and Tuesday, but Yzaguirre told the News-Press that most testing sites had hit capacity before 7 a.m. each day, two hours before testing sites even officially opened.

The woman Insider spoke with who got vaccinated criticized how the distribution of the vaccine was handled — she said the long lines make it more difficult for disabled people and others who cannot wait outside for hours at a time to get vaccinated.

Yzaguirre told Insider a reservation system is currently in the works.

And while the 67-year-old is frustrated with how the vaccine has been rolled out, she told Insider that she's happy she was able to get hers this week.

"The whole way I was driving home I screaming 'Yippee!'" she told Insider. "I'm elated just to know the process has started and that I've been part of the people testing history."