PETROL-starved motorists were urged to keep cool today as millions went back to work.

Many had spent the weekend struggling to refuel at packed forecourts — with up to 90 per cent running dry. 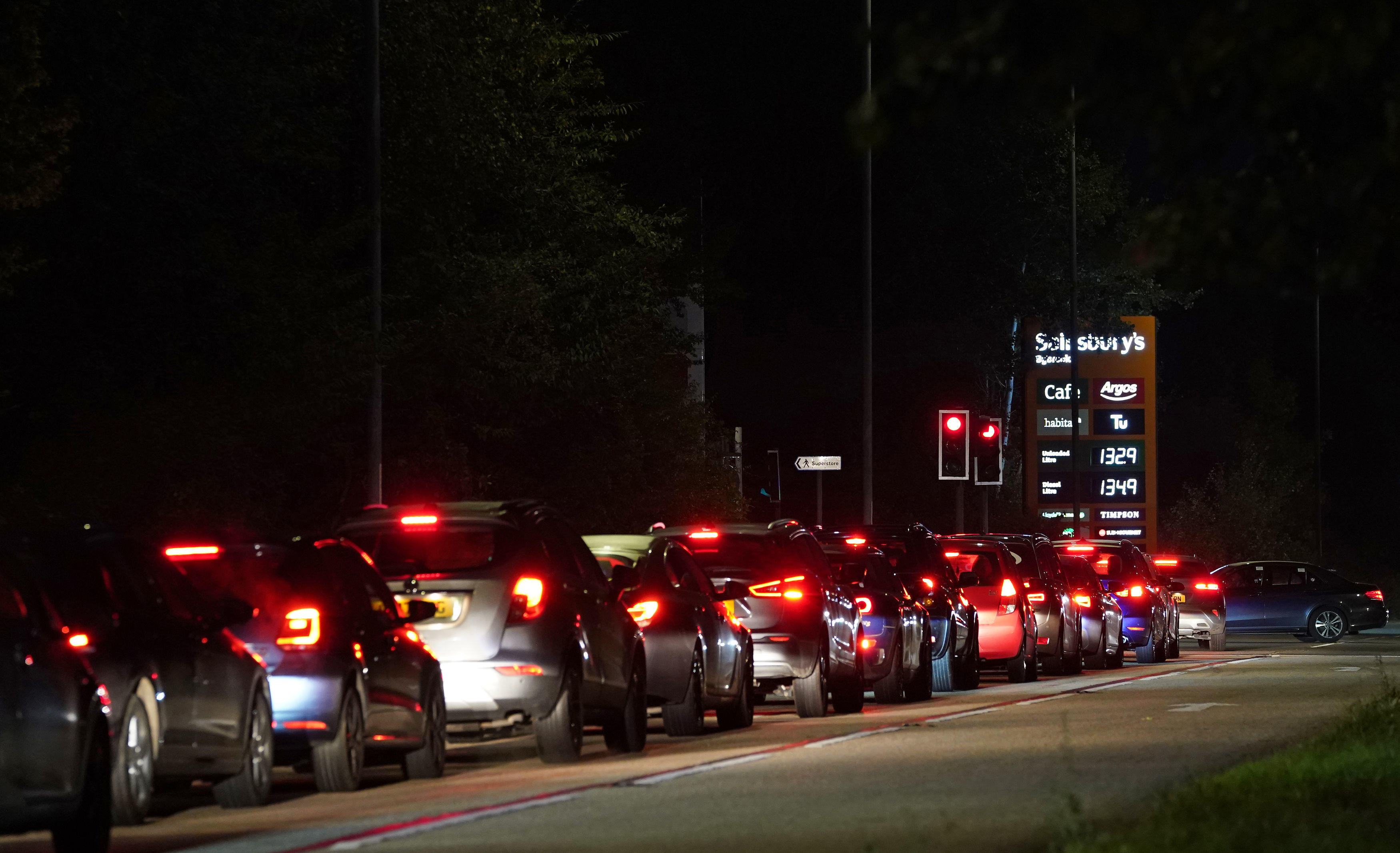 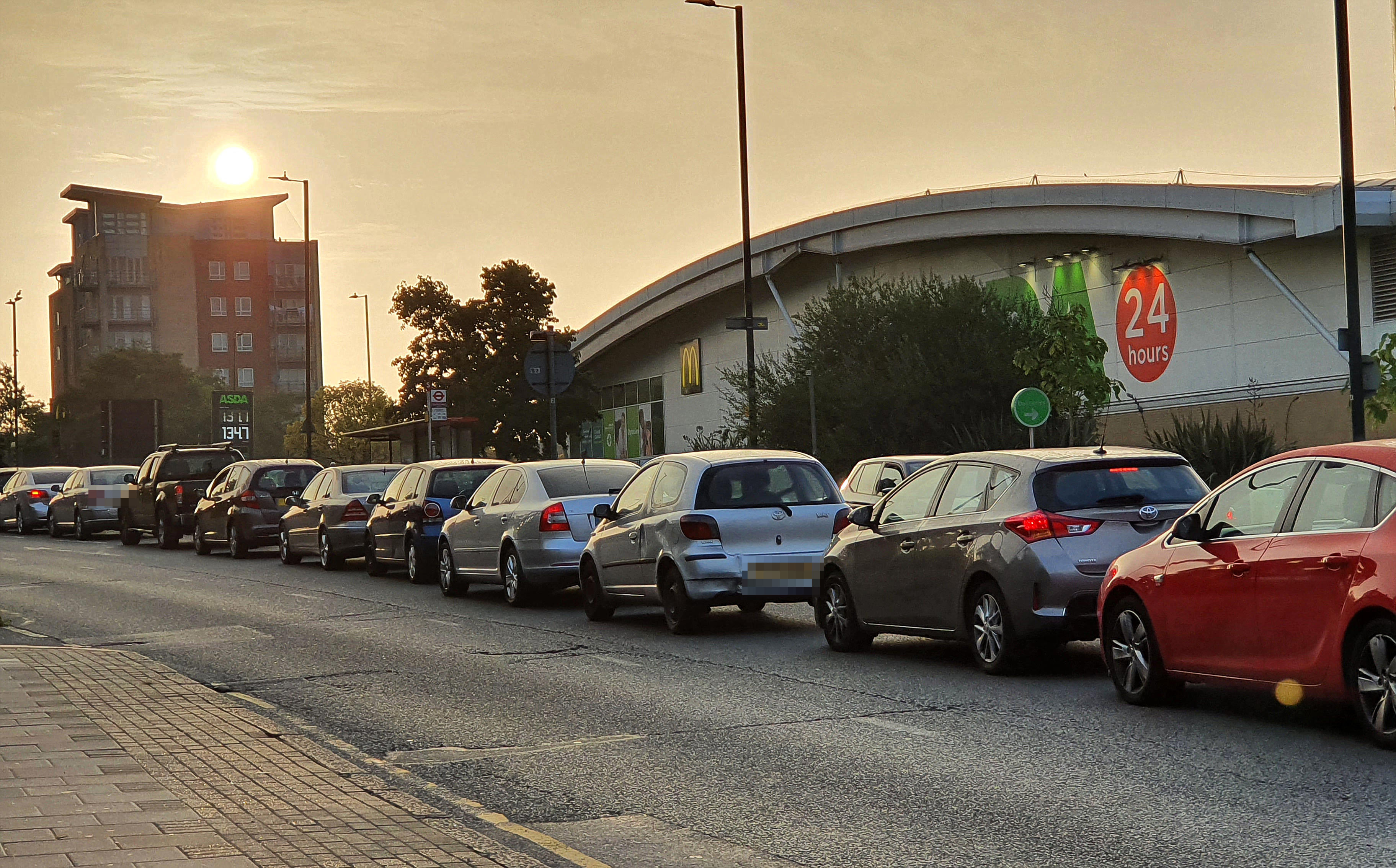 Fights broke out and there were fears schools could shut and care homes run out of food.

The Government insisted there was no fuel shortage and de­fended plans to ship in as being like “throwing a thimble of water on a bonfire”.

Last night the Government agreed to tear up competition rules so big fuel firms can work together to supply areas worst hit by shortages.

Transport Minister Grant Shapps appealed for calm and said the crisis would eventually resolve itself.

He stressed: “There is plenty of fuel within the country. If people fill up cars when they normally would then you won’t have queues and you won’t have shortages at the pump.”

Tory Ben Everitt added: “We just need a bit of forethought at the forecourt.”

No time to drive

Desperate drivers queued day and night for petrol for the new working week — as the fuel crisis sparked scuffles on garage forecourts.

Some traded punches as their frustration erupted while they waited for hours to fill up.

Yesterday, the Petrol Retailers Association — which represents around 5,500 independent outlets — said that “between 50 per cent and 90 per cent” of its members’ garages were dry.

BP revealed around 30 per cent of its service stations — many on motorways — “do not currently have either of the main grades of fuel”.

Roads approaching petrol stations were gridlocked — making it hard, if not impossible, for buses and emergency vehicles to get through. An ambulance even crashed into the back of one queuing car.

A carer told how she tried every single petrol station in a town in a bid to fill up to make vital calls to vulnerable people — but still couldn’t find any fuel.

And a driver was forced to spend the night in his car when he ran dry at a service station. The scenes came despite the Government insisting there is no shortage of fuel or need to panic buy.

Supermarkets recorded rocketing demand and thousands of garages imposed £30 limits in a bid to conserve supplies. Fears were growing yesterday that the problem — triggered by a shortage of delivery drivers — could result in schools being forced to close and care homes running out of food

I jumped in my car shaking and locked the doors.

Theatre producer Amy Smith witnessed three ugly incidents when she tried to fill up at South Mimms on the A1/M25.

Amy, 35, of East London, said: “I tried to let an ambulance in by pulling to the side on the big roundabout going into the service station. A bloke thought I was trying to push in and got out of his car and started swearing at me.

“He was saying: ‘Everyone needs to queue, even f ambulances’. Then there was a punch up between the pumps. The man who berated me was kicking off so another guy tried to calm him down and they had a fight.”

“Then the man in front of me was holding everyone up. I asked if I could help but he got angry and said: ‘Are you trying to push in?’ Then he shoved me. I jumped in my car shaking and locked the doors.”

An ambulance crashed into a car queuing for petrol in Bromley, South East London. Vehicles were unable to move out of the way due to the gridlocked road and as the emergency vehicle tried to squeeze through there was a minor collision.

A witness said: “The ambulance stopped the siren, parked and went to talk to people in the car, exchanging details as they should by law. But presumably there remained a victim somewhere in a desperate state of urgent medical attention.”

'Not enough to cover all my care calls'

London Ambulance Service said: “As a result of the incident, the ambulance was out of service for a short time and a different crew attended the patient.”

Motorist Shane Peirson, 63, ran low on fuel as she made his way home to Suffolk from Ripon races in North Yorks. After trying garages around Retford, Norfolk without luck, he drove to Markham Moor Services on the A1 but said both northbound and southbound were out of fuel.

He added: “I had hardly anything in the tank so I had to sleep in my car overnight. The pumps were open again next morning.”

Kent-based care worker Michelle Keutenius said yesterday: “At 8am I drove to every single petrol station in Folkestone. Not a single one had fuel and I don’t have enough to cover all my care calls.”

The Petrol Retailers Association’s chairman Brian Madderson said forecourts not already dry were “partly dry and running out soon”. He said: “That is something which the Government obviously are loathe to recognise. There is plenty of fuel in this country but it is in the wrong place for the motorist.”

A war of words blew up over who was to blame for the crisis — which threatens to roll on until Christmas, with supplies of turkeys and toys also at risk.

There is plenty of fuel in this country but it is in the wrong place for the motorist.

Transport Secretary Grant Shapps defended plans to ship in an emergency army of foreign HGV drivers by issuing 5,000 temporary visas. He said yesterday that he did not want to “undercut” British workers but could not “stand by and watch while queues are forming”.

He also insisted there was “plenty of fuel” after checking with the six refineries and 47 storage centres. But Mr Shapps told Times Radio the shortage of truckers could take “years to fully unwind”.

However, he was confident his offer of 5,000 visas would ease the "100 to 200" shortfall of fuel tanker drivers he said was needed now. He predicted queues would start to “resolve” themselves — partly due to the difficulty in stockpiling petrol.

The British Chambers of Commerce said the Government’s plan was the equivalent of "throwing a thimble of water on a bonfire", while the Road Haulage Association said it "barely scratches the surface".

Freight industry group Logistics UK welcomed the move, calling it "a huge step forward in solving the disruption to supply chains". But it said the country needs about 90,000 HGV drivers with supermarkets alone 15,000 short of the level needed to keep shelves stocked.

Hannah Essex, Co-Executive Director of the British Chambers of Commerce, said its bodies have been warning Government about critical labour shortages for months.

The limit of 5,000 visas will do little to alleviate the current shortfall. We urge the Government to extend this programme.

She added: “Whilst businesses will welcome that government is finally taking action, this scheme does not go far enough.

"Attempts to address the deficit of HGV drivers and poultry workers is a step forward, but these industries are only the tip of the iceberg when it comes to the huge impact of the current labour shortages.”

Andrew Opie, director of Food & Sustainability at the British Retail Consortium, said: “The limit of 5,000 visas will do little to alleviate the current shortfall. We urge the Government to extend this programme.” 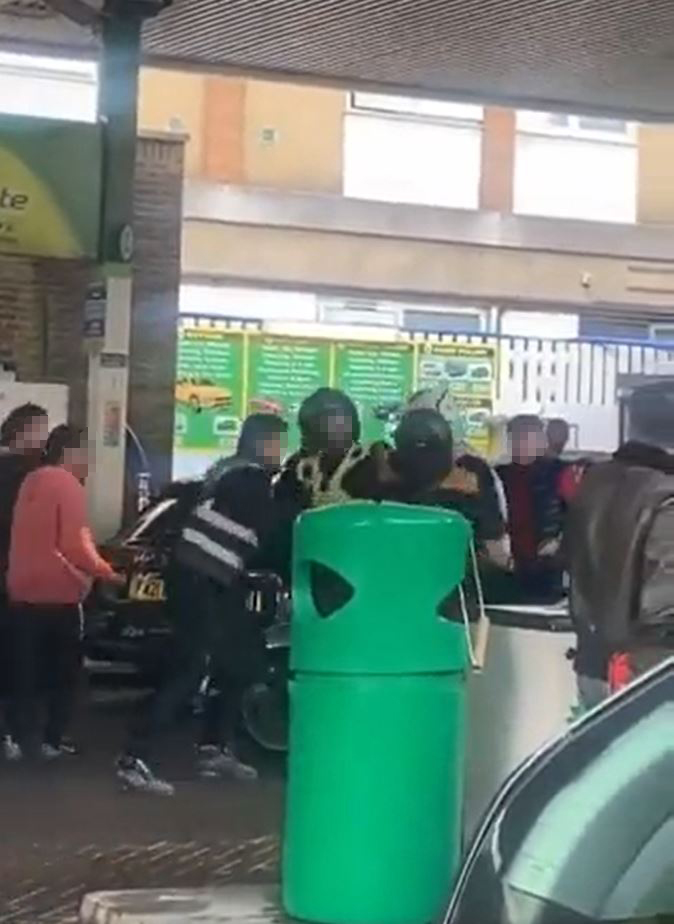 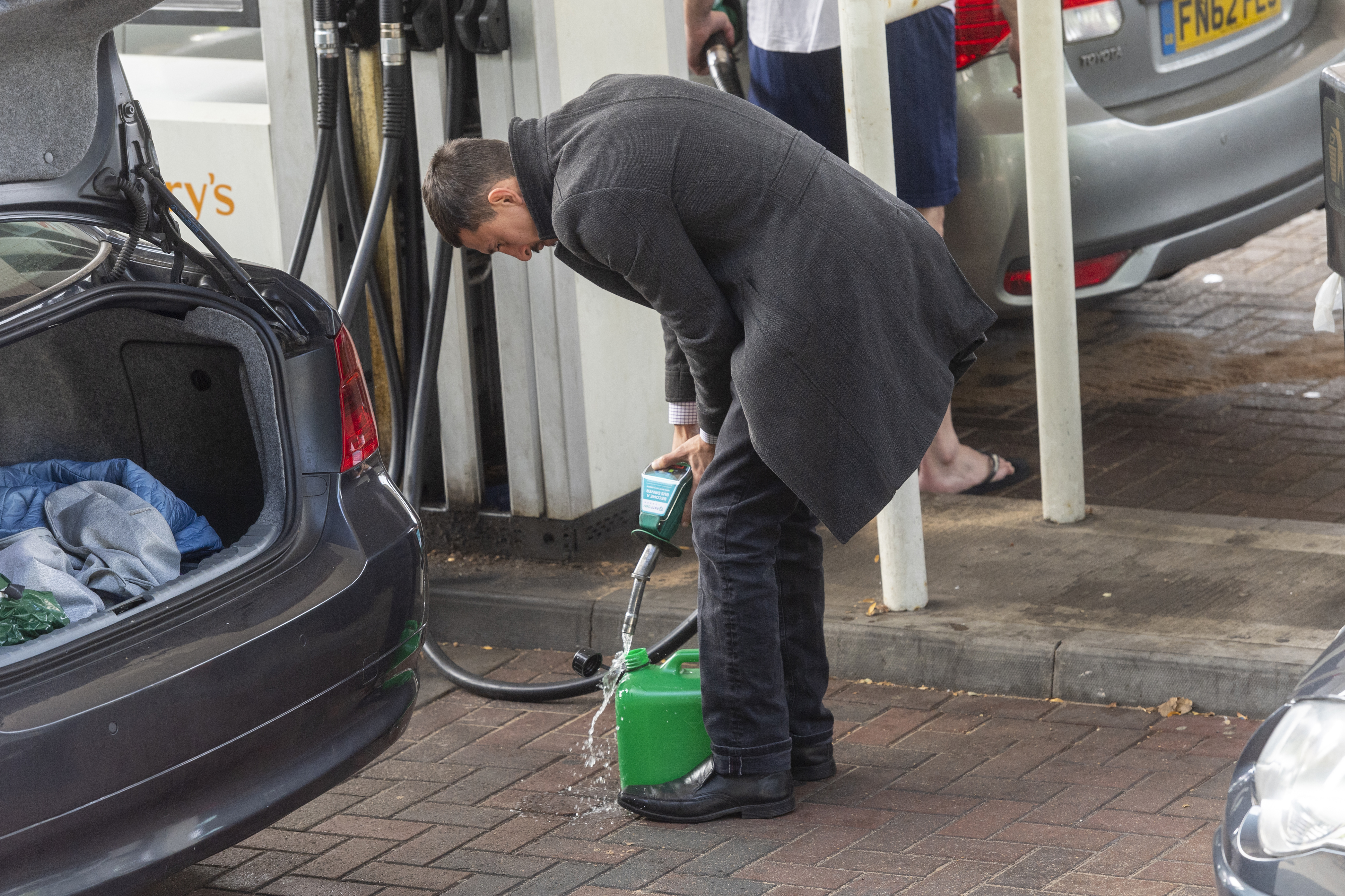 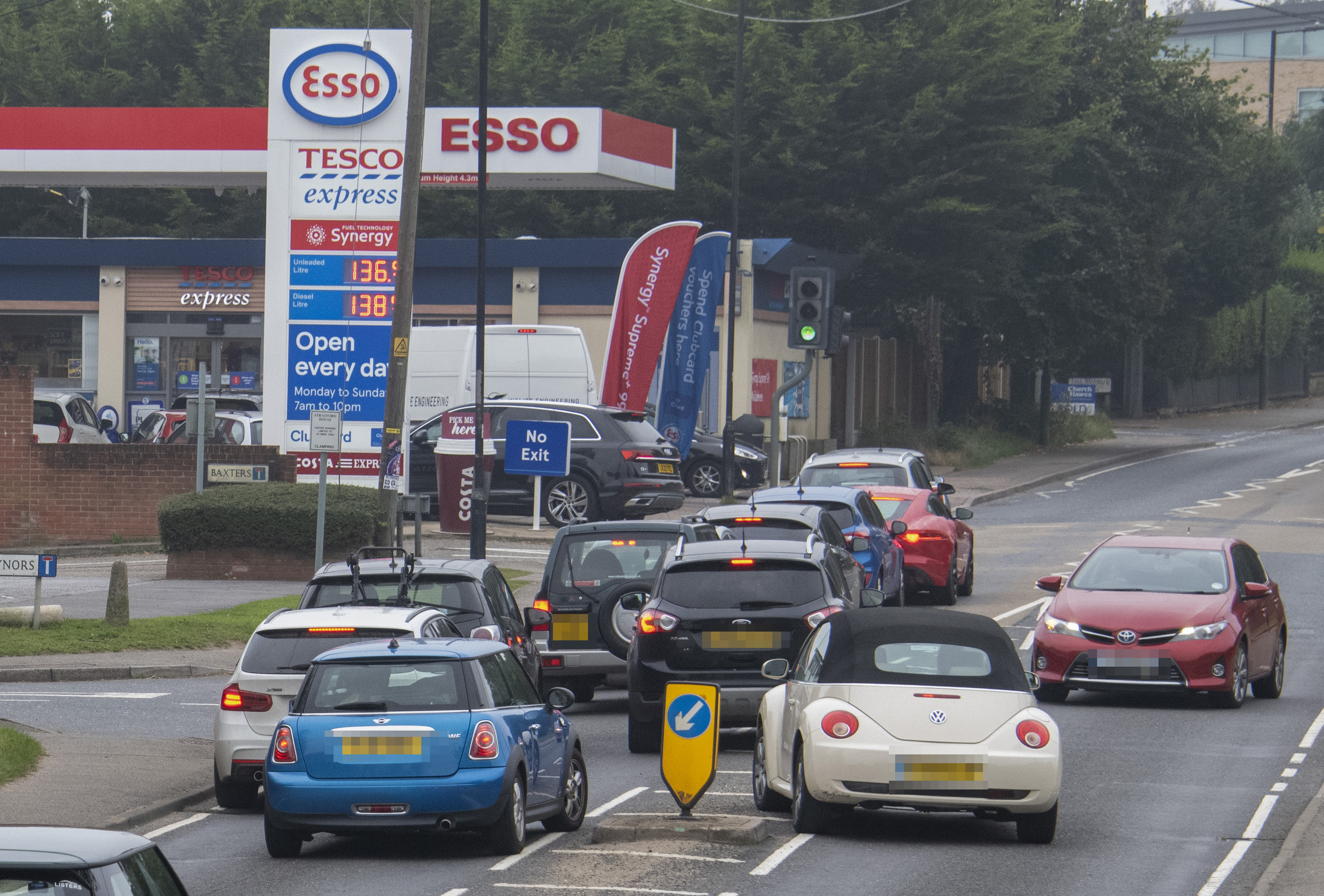 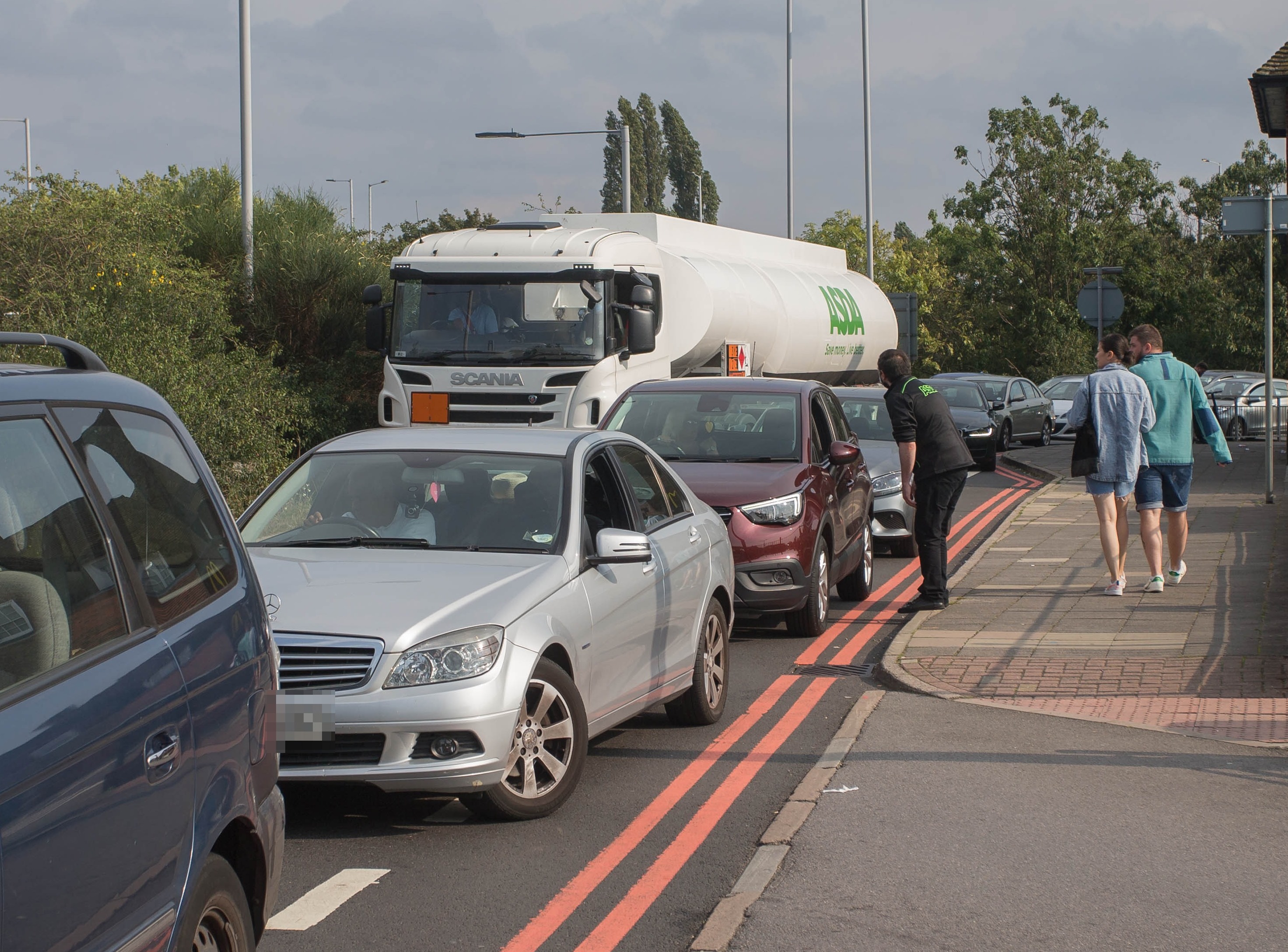 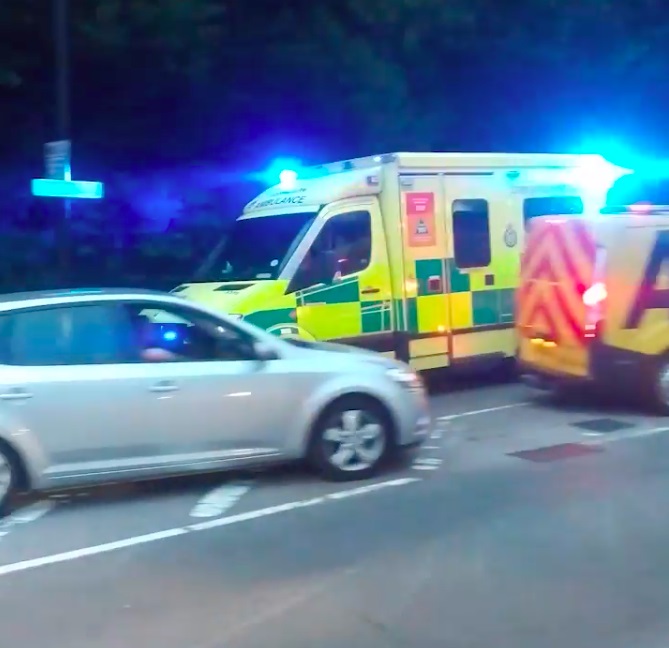 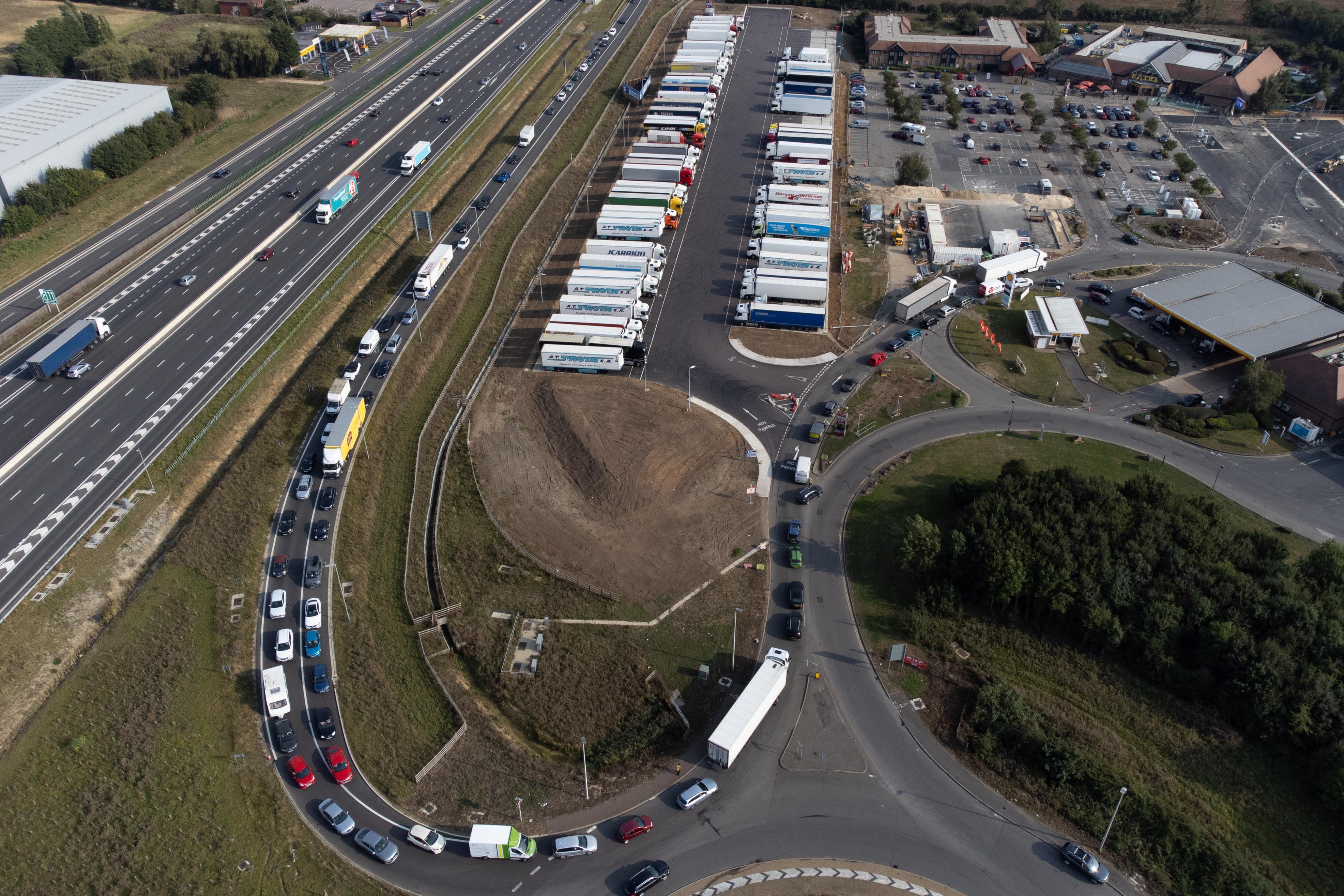 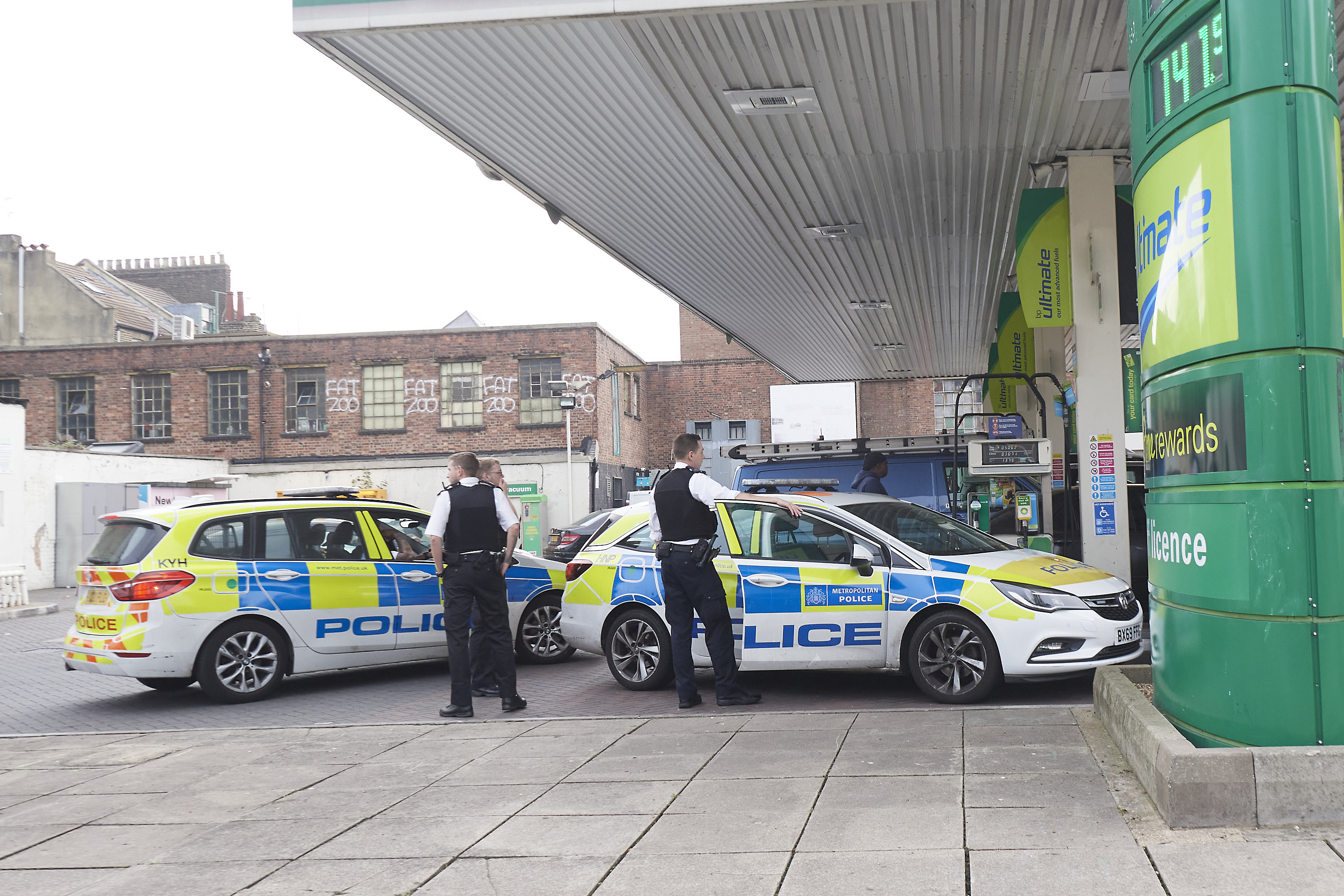 Truckers made to feel totally worthless 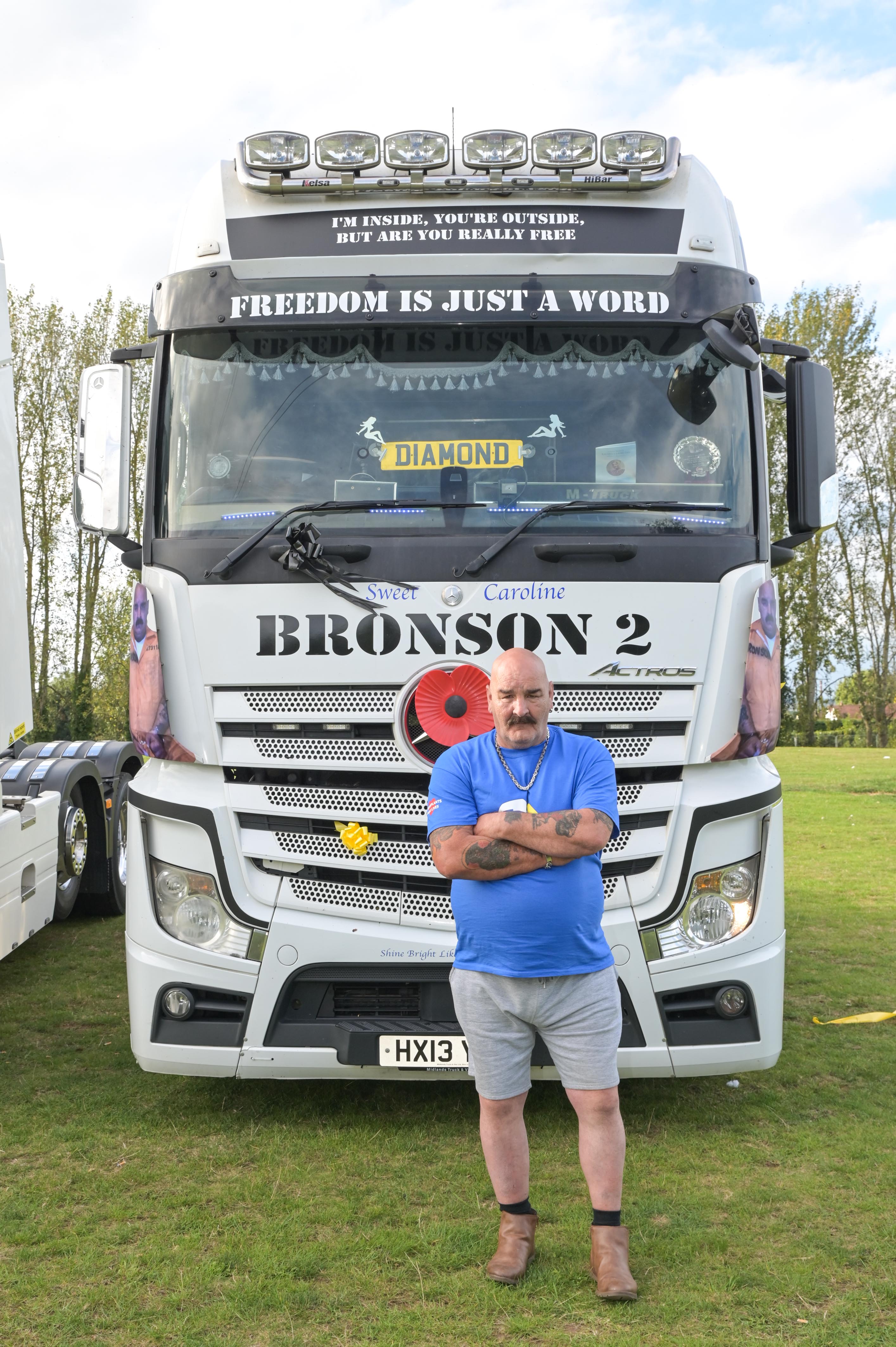 It’s not an easy job wielding a 44-ton vehicle, it requires a lot of focus. At the end of each shift, I pulled into a truck stop, cooked my dinner and slept in my cab.

In the pandemic, we were keyworkers. I never took any time off throughout, but it’s only now people are starting to realise just how essential we are.

We work extremely hard and we want to be treated with respect, with better conditions. But we’re made to feel worthless.

In Europe, drivers don’t have to pay to park overnight and when they go for fuel, they’re waved through as a priority, because they are viewed as an essential service.

Now we’re going to get another influx of foreign workers who will undercut our wages. I have no problem with someone wanting to make a better life for themselves, but they need to work for what we work for.

The stuffing has been knocked out of us drivers. I wouldn’t recommend this industry to anyone.