Defence Minister Peter Dutton’s defamation case against a refugee advocate over a tweet labelling him a “rape apologist” raises concerns the law is being used to stifle free speech in Australia, lawyers for the man have said.

Mr Dutton launched Federal Court defamation proceedings on Friday against Shane Bazzi, who has published articles online about asylum seekers, over a tweet published on February 25 this year. 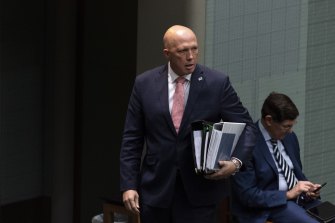 Defence Minister Peter Dutton is suing a refugee advocate over a tweet.Credit:Rhett Wyman

Greens Senator Larissa Waters issued an apology in March for a separate tweet, also published on February 25, accusing the former home affairs minister of being an “inhuman, sexist rape apologist” after he said he hadn’t been “provided with the ‘she said, he said’ details” of a rape allegation involving former Liberal staffer Brittany Higgins.

In his tweet, Mr Bazzi posted a link to a Guardian Australia article reporting Mr Dutton’s assertion on Sky News in 2019 that some women on Nauru “have claimed that they’ve been raped and came to Australia to seek an abortion because they couldn’t get an abortion on Nauru”. Mr Dutton suggested they were “trying it on” in order to secure a medical transfer to Australia.

Mr Bazzi wrote above the link: “Peter Dutton is a rape apologist.”

Mr Bazzi’s lawyers, Sydney firm O’Brien Criminal and Civil Solicitors, said in a statement on Tuesday that it had been instructed to “vigorously defend” the proceedings.

“A robust and vibrant democracy like ours should cultivate and encourage a diverse array of expressions of opinion on matters of public interest,” the firm said.

“We believe that the decision of Mr Dutton to sue Mr Bazzi for having this opinion raises genuine concerns about freedom of speech in Australia. Freedom of speech is a value that our firm will strongly defend.”

The firm said that while there must be some limits to the freedom, “those who are elected to public office must expect to be subject to adverse opinions, and society is entitled to expect a greater level of tolerance from such persons”.

“For a politician to use the defamation law to stifle the expression of a public opinion is cause for real concern,” the firm said.

Mr Bazzi had expressed an “honest opinion” on Twitter, the firm said, and “this opinion was based on a number of publicly reported statements that had been attributed to Mr Dutton”.

The defence of honest opinion in defamation law has significant limitations. In a decision in January involving The Australian Financial Review, Federal Court Justice Michael Lee said the defence required a publisher to show defamatory meanings were expressed as opinion, not fact, on a matter of public interest, and the opinion was “based on proper material”.

In most cases, “proper material” means facts set out explicitly or referred to in a publication, but this may not be necessary if the facts are notorious.

The defence of qualified privilege also relates to publications in the public interest, but includes a requirement of reasonableness that has been interpreted narrowly by courts.

At the end of each day, we’ll send you the most important breaking news headlines, evening entertainment ideas and a long read to enjoy.  Sign up to The Sydney Morning Herald’s newsletter here, The Age’s here, Brisbane Times’ here, and WAtoday’s here.