The Bureau of Meteorology believes the next 36 hours are critical in determining whether Lismore will again face a major flooding event, as the town readies for the possibility of evacuation on Monday.

A severe weather warning has been issued by the Bureau for the state’s northern rivers on Monday, as six-hour totals of 180 millimetres are forecast over the next two days.

Lismore mayor Steve Krieg said if there was any sign the town’s major river – the Wilsons River – was on the rise, residents would be urged to evacuate early.

“This is a major development, this weather front,” Mr Krieg said on Today.

“If our river rises, we’re going to start the evacuations today just to be cautious. All these people are living on the edge at the moment.”

The rainfall is set to peak in Lismore on Monday evening and is only expected to ease up late on Tuesday afternoon. 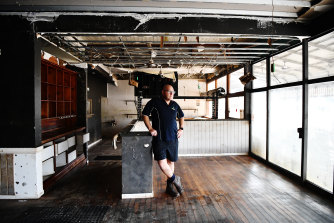 Lismore mayor Steve Krieg has urged his town to prepare for another flood event. Credit:Elise Derwin

Bureau of Meteorology forecaster Jonathan How said even then, showers will still hang around the area until the end of the week. The Northern Rivers has already been hit by between 100mm and 200mm over the weekend.

“These soils are just so wet there hasn’t really been any capacity for the trees and the grass and scrubs to absorb anything so it just all becomes runoff, and that’s why we have seen these really rapid creek rises and flash flooding across the region,” he said.

“The critical time will be anywhere between now and tomorrow afternoon into the late evening so that 24 to 36-hour period.”

Mr How said the current weather system is similar to that which northern NSW experienced earlier in the month but said it is “not as long-lasting”.

“At the moment, it’s just a trough, but a low-pressure system will develop on the trough by tomorrow,” he said.

“There is a lot of anxiety and a lot of nervousness among the community, so our top advice is to follow the advice of the SES. There’ll be busily working to give advice to local residents.”

SES Spokesperson Greg Nash said extra boots on the ground were ready to be deployed instantly.

The SES has a new base in Grafton where hundreds of extra volunteers have been sent preparing for the coming days.

“As before we are warning people around the rivers systems, listen and be prepared to go early if they need to,” he said.

“Due to how wet the ground is at the moment, floods in the next couple of days may be experienced differently to previous times. If they can, people should be prepared to go.”

As for Sydney, rain is set to fall every day this week with the wettest being Tuesday.

The Bureau has also warned the harbour city is likely to see strong winds towards the end of the week, causing hazardous surf conditions.