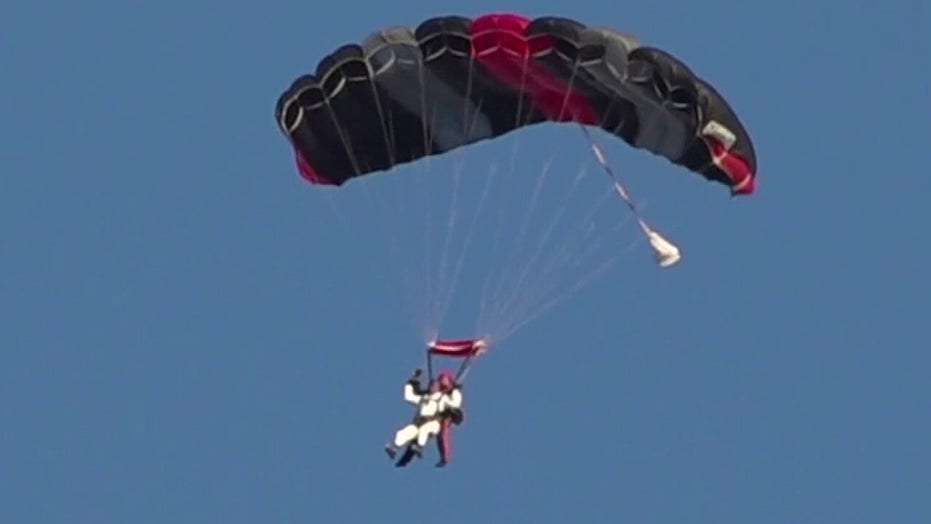 A tight-knit Pennsylvania community is honoring its veterans by placing more than 500 full-sized flags in a local cemetery in what has become a decades-old tradition.

A portion of Blairsville Cemetery, located in Blairsville, Penn., is covered in 537 meticulously placed American flags in honor of since-passed service members for Veterans Day. The 5-foot-by-8-foot flags have been erected each year since 1990 and are also displayed on Memorial Day and Independence Day thanks to the help of volunteers, a mix of veterans and community members.

And for most residents of Blairsville — which boasts a population of roughly 3,500 people and is located approximately 40 miles east of Pittsburgh — the display is personal, as the flags represent loved ones, family members and friends.

"This is a small community. My father-in-law, and his brother, my wife's uncle … they passed away and they're a part of the display. And even, unfortunately, friends of mine that I've grown up with have the display, and so on. So, I know quite a few of them now,” James Kissock, a member of the Blairsville Veterans Flag Committee, a group of community members and veterans from the local American Legion, told Fox News. 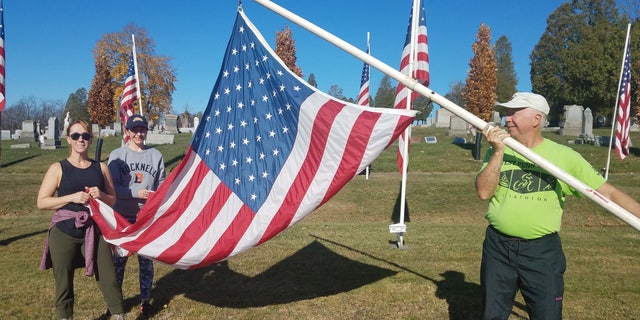 Kissock, 75, served in the U.S. Marines Corps. from 1965 to 1967, and said he has been involved with the flag display since 2000. He now works with family members of the deceased veterans in arranging their display.

Each flag has its own identifiable marker to represent a fallen service member, which includes the person’s name and service dates, and can be located on a map placed near the entrance of Blairsville Cemetery. This year’s Veterans Day display was erected on Nov. 7 and will remain until Nov. 14.

“The bottom line is we all believe the same thing,” Kissock told Fox News. “It's just the idea of displaying these deceased veterans and honoring their service and people will remember them … These are burial flags. So they're quite large and they're 20-feet apart and on 15-foot flagpoles. And when the wind blows, it's just amazing. It's beautiful.”

The committee has received more than 900 flags donated by relatives of deceased veterans, Bill Swanson, commander of the American Legion Post 0407, told Fox News. The flags on display vary per holiday because the cemetery is unable to fit all of them at one time. All veterans memorialized by the flags are either buried within the cemetery or live within a certain region, he said.

Swanson, 74, served with the U.S. Marines in the 1960s and said he had been involved with the flag display and the legion since 2008. 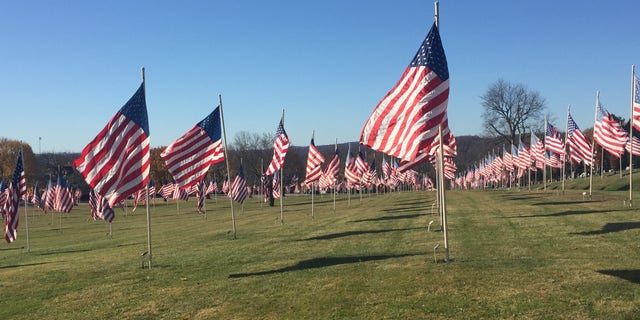 In addition to the committee, Swanson said he and the others now have, “a group of volunteers that we live and die with.”

“I think that the community just adopted it as its own,” Swanson said. “A lot of us started as helpers and then just ended up gravitating into taking care of it.”

One of those volunteers, Judy McAtee, said she got involved after she and her husband “stumbled on” the display roughly 10 years ago.

“We were big walkers. And so we're out walking, and we were walking across the cemetery those years ago and the veterans were there putting up the flags. We said, ‘Do you need any help?’” she told Fox News. “Well, here we are. We're still helping.”

McAtee is the daughter of veterans and has two children who are in the military, she said.

The holiday looks slightly different this year, with many public events canceled as a result of the novel coronavirus pandemic. Nonetheless, the community has come together to honor its own.

“Typically, we would have a parade and a program at the Veterans Circle and the community band plays at the local high school. It's beautiful,” McAtee continued. But “the flags are up. They're gorgeous.”