Australian hospitals are experiencing a mass exodus of experienced critical care nurses as the COVID-19 pandemic stretches healthcare workers unlike ever before, prompting medical colleges to warn of a workforce crisis. 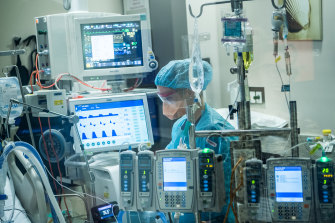 An ICU nurse treats a coronavirus patient at the Austin.Credit:Justin McManus

“There has been a mass exodus,” Mr Butcher said.

“They are not taking sick leave or annual leave, they are working extra hours, and at the end of all this we are seeing lots of senior people, who have worked in intensive care for years, leaving intensive care units at a time when they are so valued, and we need them so much.”

Australian College of Nursing chief executive Kylie Ward said roughly 20,000 nurses had given up their registration this year, a number that had shocked her during a global pandemic.

“It spoke to the psyche of where nurses were at in Australia,” Dr Ward said.

She said the severe nursing shortage was being experienced across the entire industry, but particularly in aged care, maternity wards, mental health and critical care.

The College of Critical Care Nurses was in the process of crunching data to determine why critical care nurses were leaving, but Mr Butcher said the shortage has been exacerbated by nurses being re-deployed to COVID-19 vaccination hubs to boost immunisation efforts.

Other critical care nurses were opting to retire early, choosing to move to another area of nursing due to prolonged stress and burnout, or leaving the industry entirely.

The college’s Victorian president, Rose Jaspers said while burnout had been an issue of concern before the pandemic, “COVID-19 has been the straw that broke the camel’s back.”

“We have a workforce which had not had a break for two years,” the former ICU nurse said.

“On top of that, their working conditions every day are extreme and challenging. They’re working phenomenal amounts of overtime, double shifts and extra shifts.”

Ms Jaspers said hospitals across Victoria were struggling to fill rosters. She noted that although the number of new coronavirus admission into ICU was falling in Victoria, nurses were still caring for dozens of coronavirus patients who were lingering in ICUs for up to 12 weeks, including some of the most gravely ill.

Ms Jaspers said she was “extremely concerned” about the workforce in the coming months as elective surgery re-commenced, meaning some theatre nurses who had been deployed to ICU units to help care for COVID-19 patients, would need to return to their normal duties.

Dr Ward said while there were an estimated 20,000 nurses expected to graduate from university at the end of the year, “you cannot replace the nurses giving up their registration with 20,000 first year graduates who need full support in understanding the system.”

She estimates there are roughly 12,200 vacant nursing positions in Australia and said there had been cases where wards in hospitals had been forced to close temporarily due to inability to fill shifts.

Dr Ward said retaining staff continued to be the “biggest factor” and Australia needed to do better to support and retain graduates.

Mr Butcher said COVID-19 had taken a heavy emotional toll on healthcare workers who were developing post-traumatic stress disorder, depression and anxiety at exponential rates compared to before the pandemic.

A recent survey by Monash University and Royal Melbourne Hospital of more than 7800 Australian health care workers, most of whom were based in Victoria, found more than 40 per cent had symptoms of post-traumatic stress disorder by the final stages of the state’s second wave.

This meant they may have been easily startled, had trouble sleeping, had continually recurring thoughts or felt irritable.

Of concern, one of the significant predictors of PTSD, along with emotional exhaustion and burnout, was if health care workers worried their patients would not receive the appropriate level of care because of a shortage of resources – an issue that continues to be the heart of the debate around Australia’s response to the pandemic.

“Nurses like to look after people and when they are forced to lower their standards of care it really, really eats at away at them,” he said.

Ms Jaspers said more needed to be done to entice graduate nurses into critical care, but the cost of postgraduate program was out of reach for many.

A Graduate Certificate in Critical Care Nursing at the University of Melbourne costs about $11,000 and will rise by $336 next year, however, those nurses are only paid roughly an extra $56 a week.

Last month, The Age revealed Australia will allow 2000 overseas nurses and doctors to enter the country for work under a plan being finalised by the Commonwealth and states to ease a healthcare staffing crisis.

The Victorian Health Department estimates that since the start of the pandemic, the number of healthcare migrants joining the state’s workforce has plummeted by about 40 per cent.

This was due to the difficulty of recruiting doctors, nurses and allied health professionals from overseas while navigating border closures and quarantine arrangements.

A Victorian department of health spokesman said on Wednesday the state’s ICU nurses had been supported by surge support allowances, funding for more wellbeing support and increased training due COVID-19.

The spokesman said there were now more ICU nurses in Victoria than there were before the pandemic, with the number of qualified critical care nurses increasing by 2.6 per cent between 2019 and 2020.