Portland: Deadly wildfires raging across Oregon kept half a million people under evacuation alert on Saturday as President Donald Trump announced plans to visit California for a close-up view of damage wrought by the largest fires in the state's history.

Thousands of homes have burned down in recent days in Oregon, which has become the latest epicentre in a larger summer outbreak of fires sweeping the western United States, collectively scorching a landscape the size of New Jersey and killing at least 25 people. 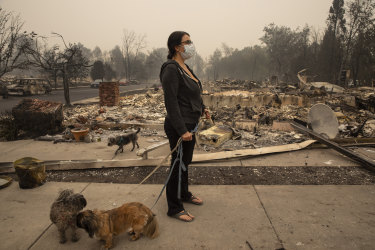 Lexi Sovllios from Talent, in Oregon, stands amid the ruins of her home.Credit:

The firestorms, some of the largest on record in California and Oregon, were driven by high winds that howled across the region for days in the midst of record-breaking heat. Scientists say global warming has also contributed to extremes in wet and dry seasons, causing vegetation to flourish then dry out, leaving more abundant fuel for wildfires.

With at least five people already confirmed dead from the fires in Oregon this week, state officials warned of possible "mass fatality incidents" as they searched scorched ruins for dozens of people who had been reported missing.

The Pacific Northwest as a whole has borne the brunt of an incendiary onslaught that began around Labor Day, darkening the sky with smoke and ash that has beset northern California, Oregon and Washington with some of the world's worst air-quality levels.