A Boots optometrist whose eight-year-old patient died after she failed to spot he had a fatal eye condition has apologised to his family for the first time as she was struck off more than a decade after his death.

Honey Rose, 40, was struck off the optometry register as her case concluded this week – a decade after she ‘dishonestly’ recorded the results of Vinnie Barker’s routine eye test and missed serious warning signs.

The mother-of-three was convicted of gross negligence manslaughter in 2016 following a landmark trial and was handed a two-year suspended sentence.

However, the conviction was quashed a year later at the Court of Appeal as the judge concluded that despite her ‘serious breach of duty’ her error did not post an ‘obvious and serious risk of death’ to eight-year-old Vinnie.

After Ms Rose’s conviction was quashed, Vinnie’s parents Joanne and Ian Barker said: ‘Not only has Vinnie been let down by an individual optometrist, today he has also been failed by the legal system.’ 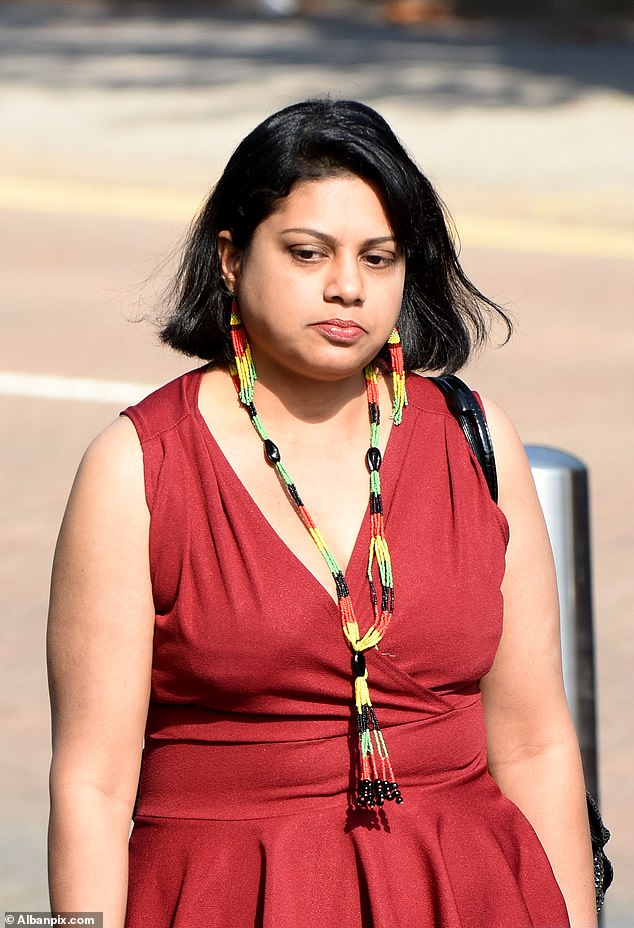 Optometrist Honey Rose (pictured outside Ipswich crown court) was originally convicted of manslaughter in 2017 following a landmark trial. However, the conviction was quashed a year later at the Court of Appeal 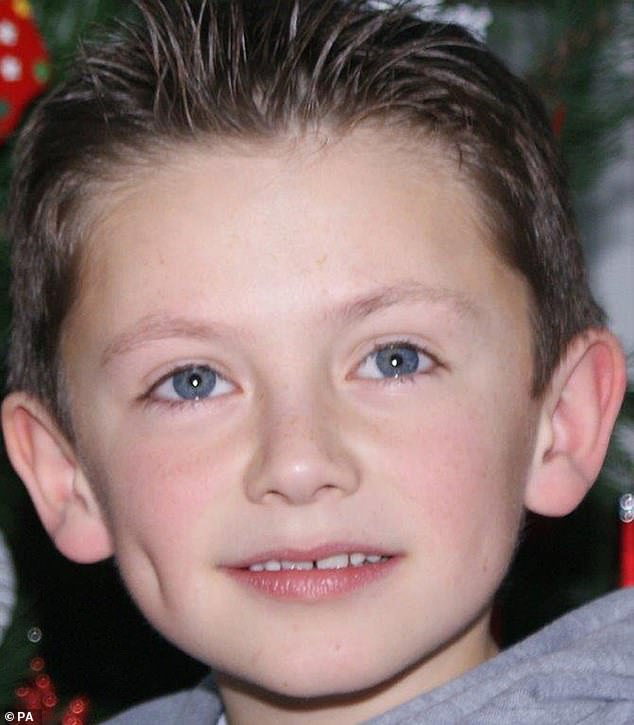 In 2020, Boots optometrist Ms Rose was suspended from practising for nine months by her professional regulator. But last year the High Court ruled the suspension was too lenient.

Now, at a new General Optical Council (GOC) tribunal, the 10 year ordeal has been brought to a close with Ms Rose being struck off the register.

During the hearing Ms Rose apologised to Vinnie and his devastated family ‘for my failings’ which occurred during the eye examination at Boots in Ipswich in February 2012.

The locum optometrist failed to notice Vinnie had swollen optic discs, an ‘abnormality’ which suggested he had a rare condition called papilloedema and is a symptom of fluid on the brain.

Ms Rose had been looking at examination photos belonging to another patient instead of Vinnie’s, and later ‘dishonestly’ gave an inaccurate recording of the examination.

In her notes, she recorded Vinnie’s peripheries – the edges of his retinas – were ‘normal’ – when in fact she had not examined either of them.

Five months later, in July 2012, Vinnie fell ill at school and died hours later in hospital due to a build-up of fluid on the brain.

At the latest tribunal, which ran from July 4 until Tuesday, July 26, Ms Rose apologised for the first time.

She said: ‘I would like to apologise to Vinnie and his family, and to everyone who has been affected in any way in this case, for my failings.

‘I didn’t ask Vinnie’s mum for help [during the examination], but I would now.

‘I didn’t check the name on the photograph but would now.

‘I would never make a record in the same way as I did for Vinnie’s periphery again.

‘I made a misleading and dishonesty (sic) entry in relation to the periphery. I recorded that the periphery was normal but the periphery had not been examined as I had been unable to complete ophthalmoscopy and it was not visible on the photographs.

‘I therefore had no observable basis for writing that it was normal; I had made an assumption.

‘I understand that the way I made the record would have given future practitioners the impression that I had examined the periphery when in fact I had not done so.

‘If I was unable to examine the periphery, for whatever reason, I should have made this clear on the record and noted why this was so that other practitioners would known (sic) what had happened.’ 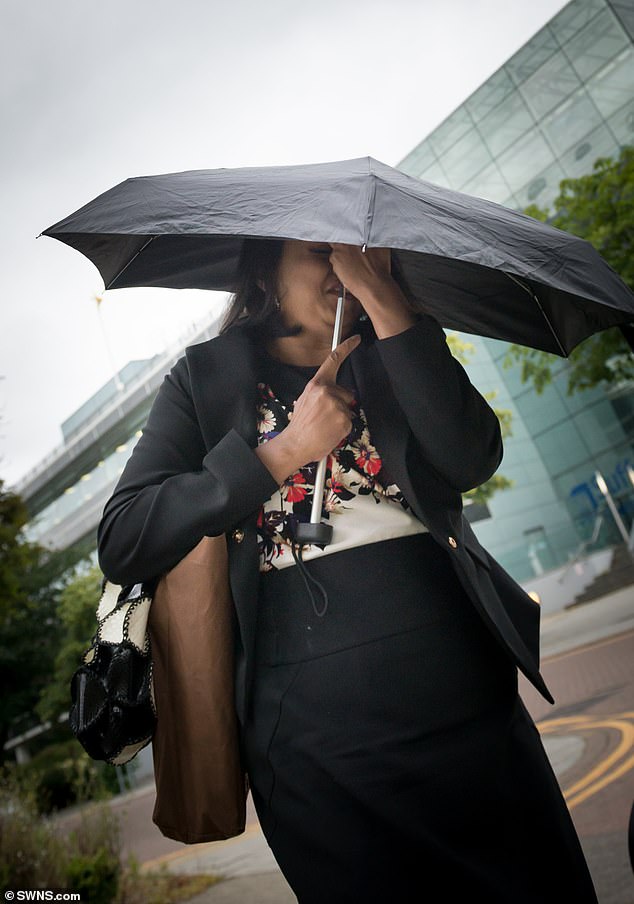 ‘I would like to apologise to Vinnie and his family, and to everyone who has been affected in any way in this case, for my failings, Honey Rose said in her apology during her General Optical Council tribunal. Pictured: Honey Rose arriving at Ipswich Crown Court in 2016 for the start of her original trial, where she was convicted of gross negligence manslaughter – but the conviction was then quashed a year later on appeal

Ms Rose has previously ‘accepted that had she looked at the correct images she would have referred Vinnie to hospital for an urgent appointment’.

When her gross negligence manslaughter conviction was quashed in 2017, Vinnie’s family said they were ‘devastated’ and that it should have been upheld.

At the High Court in 2021, when Ms Rose’s suspension was successfully challenged, Mrs Justice Collins Rice said the GOC had ‘failed to assess the gravity of the risk of the harm’.

Now, at the latest GOC tribunal, the panel criticised Ms Rose, from London, for her ‘grave’ errors and ‘casual’ attitude to record-keeping.

Chairwoman Jayne Wheat said: ‘Rose abandoned her statutory duty to conduct a full internal examination of both eyes and relied on incorrect central retinal images because she had failed to identify the correct patient’s images.

‘This was serious in its own right. What made the situation worse was Ms Rose’s unexplained recording of misleading, and on one occasion dishonest information.

‘The Committee has clearly identified that Vinnie was put at an unwarranted risk of harm.

‘Vinnie, through his age, was a vulnerable patient… Ms Rose was in a position of trust and was expected to conduct a full eye examination.

‘The Committee recognised Rose’s long-term commitment to the profession of optometry.

‘It appreciated that her continued participation in the regulatory process has been throughout the course of an exceptionally long period of time.

‘The Committee also recognised that the events that gave rise to the misconduct took place over one day.

‘However, it could not ignore the serious nature of that misconduct and the fact that Rose is yet to provide an insightful explanation of how this misconduct occurred.’

Honey Rose, who started training to become a financial adviser in 2019, argued she should not be struck off as her failings were ‘not so serious as to be irremediable or incompatible with being a registered optometrist’