The emergence of the Omicron variant could slice hundreds of millions of dollars from the Victorian budget amid growing alarm that the state’s long-awaited economic recovery could stop dead as people go into self-imposed isolation.

State Treasury modelling shows a “vaccine-resistant” COVID-19 strain could cut as much as $354 million from the budget in 2022-23, or $1.1 billion over the four-year budget period. 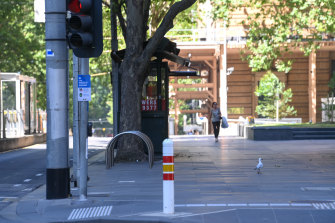 With Melbourne’s CBD again resembling a ghost town, many businesses are now anxiously hoping the Omicron wave washes over the state relatively quickly.

“It all depends on how long Omicron lasts,” Australian Industry Group Victorian head Tim Piper said. “It might only be another month, so that shouldn’t derail anything. But it is inevitable that the longer this goes on, the more impact it is going to have on all of us and therefore on the economy.”

In the May budget, the government predicted the state economy would rebound by 6.5 per cent in 2021-22 and by 3.25 per cent next financial year, after a slump in 2020 following the initial outbreak of the coronavirus.

Those predictions were derailed by the emergence of the Delta variant, which triggered a protracted lockdown that stopped Victoria’s economy in its tracks.

Then in December last year, Treasury predicted the state economy would return to the strong growth scenario it set out in the May budget. However, this time it tipped the economic surge to happen 12 months later, with the economy expected to grow by 4.5 per cent next financial year.

The emergence of the Omicron variant has raised questions about whether Victoria’s economic recovery will be hit for a third time.

The state government remains hopeful the Omicron wave will prove short-lived. Health Minister Martin Foley said the emerging consensus was that Victoria’s Omicron wave would peak in late January or early February, with a lag of a “week or two” before a peak in hospitalisations and deaths.

Asked if the government’s economic and budget forecasts still applied, Mr Foley said up until Christmas there had been a significant uptick in economic activity. 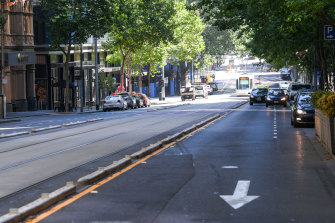 Cafes and restaurants have been hit by a triple whammy of self-isolation and staff and supply shortages.Credit:Eddie Jim

“I don’t have any data to update that,” he said.

A spokesman for acting Treasurer Danny Pearson said the recent strength of the economy meant Victoria was in a position to recover quickly from the impact of the current outbreak, “just as it recovered swiftly from the Delta outbreak”.

RMIT emeritus professor David Hayward said he believed governments in Australia had followed the lead of other countries such as Britain and operated under an “optimism bias”.

“We are in this uncertain period as we move from heavy government intervention to a more light-handed approach, with shortages of testing compounding the problems,” he said. “What the government is hoping for is that as soon as the virus passes its peak, people shoot back out and start spending money.”

Mr Piper said the impact of the Omicron outbreak on the economy had not been uniform.

“Businesses are wary at the moment as to how long this will last. Business has been quite positive in the last few months as things have improved markedly, but consumers have now reined in spending,” he said.

Mr Piper said this had particularly affected retail and hospitality. But other sectors, including areas such as food manufacturing, had been “going gangbusters”.

He said problems for the hospitality sector had been compounded by a lack of skilled and unskilled workers.