International Olympic Committee president Thomas Bach accidentally called Japanese people ‘Chinese’ while attempting to win over the reluctant hosts of the Tokyo 2020 Games in the latest blow for the sporting event.

In his first public appearance on Tuesday since arriving in Tokyo last week, Bach tried to reassure the organising committee and the public that the Games would not be a coronavirus super-spreader event.

‘Our common target is safe and secure Games,’ Bach said in his opening remarks to organising committee president Seiko Hashimoto and its chief executive Toshiro Muto.

‘For everybody; for the athletes, for all the delegations, and most importantly also for the Chinese people… Japanese people,’ he said, catching his mistake quickly. 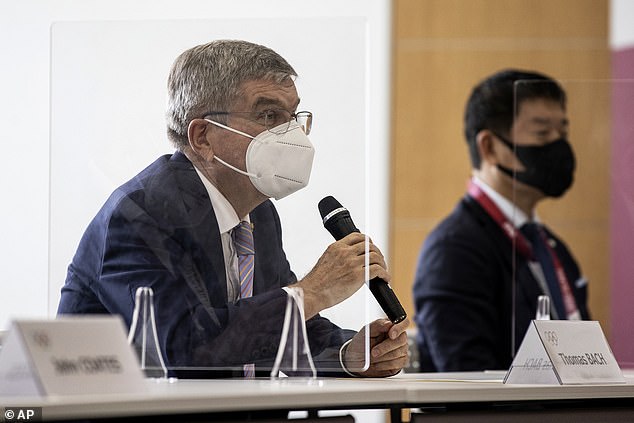 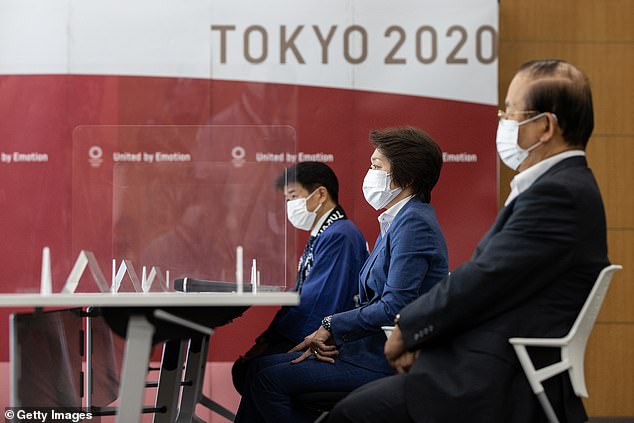 Bach’s comments in the briefing were interpreted from English to Japanese. The Japanese media quickly reported it and there was backlash on social media.

The slip-up comes just days after it was announced the Games would go ahead without spectators in almost all venues as Japan declared a coronavirus state of emergency for Tokyo that will run throughout the event.

‘You have managed to make Tokyo the best-ever prepared city for the Olympic Games,’ Bach said. ‘This is even more remarkable under the difficult circumstances we all have to face.

‘The Japanese people can have confidence in all the efforts we are undertaking to make these Games for them secure and safe, with all the intensive, most strict Covid-19 countermeasures,’ he said.

Bach also pointed out the urgency of getting ready with deadlines looming.

‘Now it’s 10 days to go to the opening ceremony,’ Bach said. ‘That also means there’s still a lot of work to do.’ 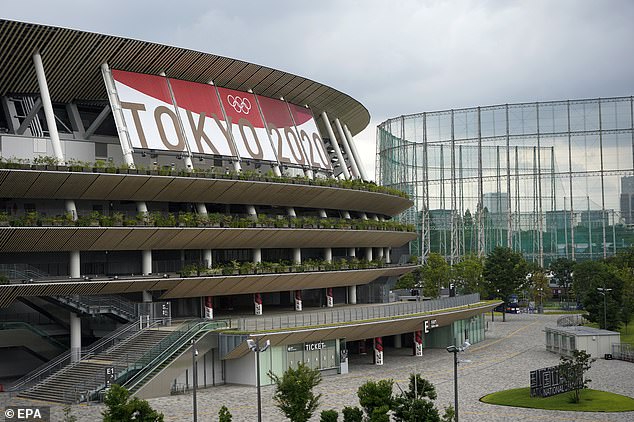 Four foreign electricians engaged in maintenance works for the Tokyo Olympic Games have been arrested for allegedly using cocaine, the Tokyo metropolitan police said on Tuesday.

The Olympics organisers confirmed that the four are employees of Aggreko Events Services Japan Ltd, which has been contracted for temporary electric power services for Games operations.

The arrests for violating drug laws are likely to be seen as an embarrassment for organisers of the Games, who have already been struggling with public opposition to the event amid fears that an influx of people from overseas would accelerate a spike in the coronavirus pandemic.

Robert Wells, president of Aggreko Events Services Japan, said in a statement that the company is fully cooperating with the police investigations and the four employees have been removed from their current positions.

The suspects, two Americans and two British nationals, are in Japan for the Olympic-related works, said an Aggreko representative.

Public broadcaster NHK said the four denied the charges, but their urine showed traces of cocaine.

‘Should the allegations turn out to be true, Tokyo 2020 will issue a strict warning to the company and advise them to take all possible measures to ensure that such an incident does not happen again,’ the Games organisers said in an emailed statement.

Chief Cabinet Secretary Katsunobu Kato said he hoped the organizers would firmly deal with the incident.

‘It’s really regrettable if it’s true an act that violates the law has been committed,’ he told at a media briefing.

Bach, who has spent his first three days in Japan in isolation at the IOC’s five-star hotel in central Tokyo, ended his speech with a Japanese phrase: ‘Gambari mashou,’ which translates as ‘Let’s do our best.’

Japan’s state of emergency went into force on Monday and runs through to August 22.

The restrictions will be in effect throughout the entire duration of the Olympics, which open on July 23 and close on August 8. Its main impact is to push bars and restaurants to close early and stop selling alcohol, a move aimed at cutting down circulation on crowed trains.

Bach’s visit on Tuesday coincided with the official opening of the Olympic Village on Tokyo Bay. Organisers did not offer an immediate count of how many athletes were on hand.

He is also scheduled to visit the Japanese city of Hiroshima on Friday in an effort to tie the Olympics to the city’s effort to promote world peace. IOC Vice President John Coates it to visit Nagasaki the same day.

Japan’s Kyodo news has reported that a group in Hiroshima is opposing Bach’s visit.

A small group of protesters gathered Saturday outside Bach’s hotel carrying placards that said he was unwelcome in Tokyo.

Bach and other senior organisers have been criticised for pressing ahead with the Olympics during the pandemic amid polls that show — depending how the question is phrased — that 50 to 80 per cent oppose the Olympics taking place.

The IOC gets almost 75 per cent of its income from selling broadcast rights, and estimates suggest a cancellation could have endangered $3 billion to $4 billion in income. Japan has officially spent $15.4 billion on the Olympics, and government audits say it is much more. All but $6.7 billion is public money.

The Olympics will involve 11,000 athletes entering Japan along with tens of thousands of others including officials, judges, media, and broadcasters.

Prime Minister Suga said it was essential to introduce a state of emergency to prevent Tokyo, where the highly infectious Delta COVID-19 variant was spreading, from becoming the source of another wave of infections. 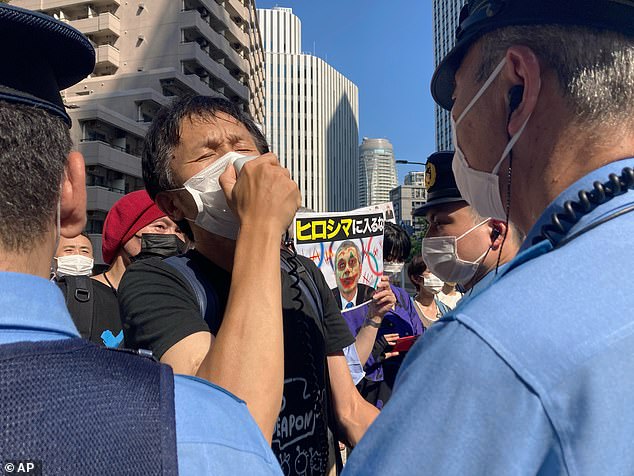 Once seen as a chance for Japan to stand large on the global stage after a devastating earthquake a decade ago, the showpiece event was delayed by the pandemic last year and has been hit by massive budget overruns.

Medical experts have said for weeks that having no spectators would be the least risky option, amid widespread public fears that an influx of thousands of athletes and officials will fuel a fresh wave of infections.

Shigeru Omi, the government’s top health adviser, told a parliamentary health committee on Wednesday last week it was important to reduce the number of Olympic officials and others attending events as much as possible.

Early July to September was ‘one of the most important periods’ in combating the coronavirus in Japan, he said.

‘We have been saying that it’s preferable that the events be held without spectators,’ Omi said.

‘We are asking many people to take steps to prevent further spread of the infection. Images of spectators would be sending out a contradictory message to a lot of people… In formulating our coronavirus response, people’s feelings are a very important factor.’ 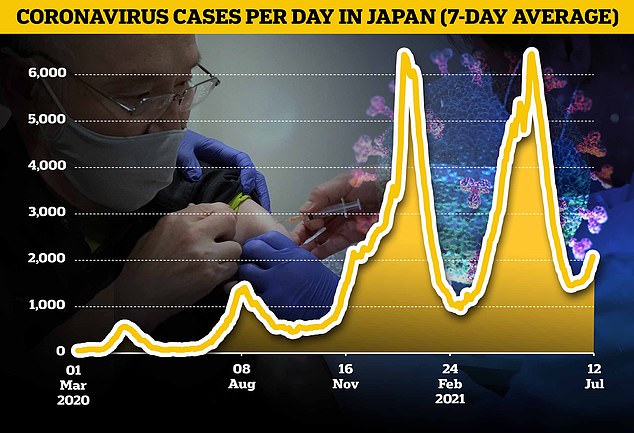 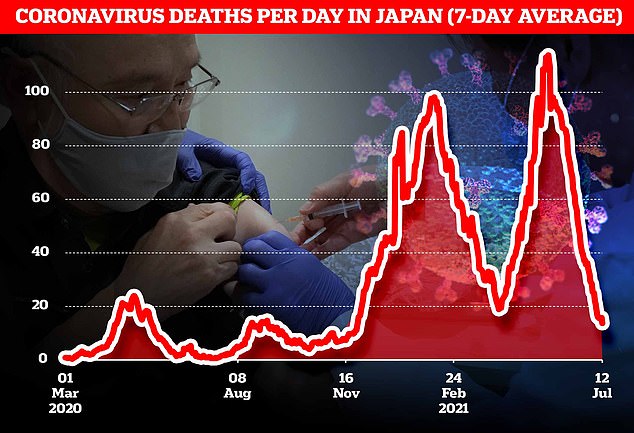 Officials are now asking people to watch the Olympics on TV to limit the spread of the virus.

‘We would ask people to support athletes from home,’ the chief cabinet secretary, Katsunobu Kato, said.

Tokyo authorities have also decided to move most of the torch relay, set to reach the capital on Friday, off public roads.

Torch-lighting ceremonies without spectators will be held instead.

The Olympics were originally expected to be a huge tourist draw, but banning foreign spectators put paid to hopes of an early recovery in inbound tourism, frozen since last year.

Though highly unlikely now, a full cancellation would mean lost stimulus of 1.8 trillion yen, or 0.33 per cent of gross domestic product (GDP), the Nomura Research Institute said in a recent report.

But Nomura Research Institute executive economist Takahide Kiuchi said that loss would pale in comparison with the economic hit from emergency curbs if the Games turned into a coronavirus super-spreader event.

‘If the (Olympic Games) trigger the spread of infections and necessitate another emergency declaration, then the economic loss would be much greater,’ Kiuchi said.

Also on Tuesday, police in Tokyo said a group of four U.S. and British men working for a power company contracted for the Olympics were arrested on suspicion of using cocaine.

Aggreko Events Services Japan confirmed it employed the suspects and apologized for the trouble. NHK public television reported that the four suspects entered Japan between February and May and were staying in Tokyo.

New virus cases in Tokyo were reported at 830 on Tuesday, up from 593 one week ago. It is the 24th straight day that cases were higher than seven days previous.

The office of the Japanese prime minister said Tuesday that 18.5 per cent of Japanese are fully vaccinated.

September 2013: Tokyo is awarded the 2020 Olympics after convincingly defeating rivals Istanbul and Madrid for the right to stage the Games for the second time, having first hosted them in 1964.

January 2020: The coronavirus is declared a global public health emergency by the World Health Organization as fears grow in Japan that the outbreak could threaten the Games.

February 2020: A number of international sporting events, including Olympic qualifying tournaments, are cancelled or postponed.

With under five months to go before the event, the deputy director general of the Tokyo 2020 Preparation Bureau at the city government says they have no Plan B for the Games despite alarm over the spread of the virus in Japan and elsewhere.

March 2020: Despite the organising committee stating earlier in the month that preparations would continue as planned and the International Olympic Committee saying it would proceed as per the original schedule, the Games are postponed by a year.

January 2021: Japan’s government continues with preparations to hold the Games, repeatedly insisting it will hold the event amid the pandemic despite opinion polls showing a majority of Japanese want them postponed again or cancelled.

March: The Olympic torch relay kicks off, beginning a four-month countdown to the Olympics, although celebrations are scaled back because of coronavirus curbs.

Organisers say international spectators will not be allowed to enter Japan during the Games, with a decision on local fans to be made in June.

May 18: The Tokyo Medical Practitioners’ Association throws its weight behind calls to cancel the Games, saying hospitals are overwhelmed as the country battles a spike in COVID-19 cases.

May 21: A Reuters survey finds nearly 70 per cent of Japanese firms want the Tokyo Olympics either cancelled or postponed.

May 26: The White House reaffirms its support for Tokyo’s plan to hold the Games and for U.S. athletes competing there despite the issuing of a government advisory against travel to Japan.

An editorial in the Japanese newspaper Asahi Shimbun, an official partner of the Games, calls for the Olympics to be cancelled, citing risks to public safety and strains on the medical system.

May 27: The head of a Japanese doctors’ union says holding the Games in Tokyo could lead to the emergence of an ‘Olympic’ coronavirus strain, but a senior International Olympic Committee member says the Games will go on ‘barring Armageddon’.

June 13: The Group of Seven wealthy nations say in a communique after a leaders’ summit in Cornwall that they support the holding of the Tokyo Olympics this year.

June 23: Organisers release guidelines banning alcohol, high-fives and talking loudly for the reduced numbers of Olympic ticket holders allowed into venues, as Tokyo marks a month until the Olympics open.

June 29: Tokyo decides to move the first half of the 15-day Olympic torch relay scheduled to take place in the capital off public roads, the metropolitan government says, as coronavirus infection numbers show signs of surging again.

July 6: Organisers ask the public not to gather on the streets of Sapporo for the marathon and race walk, a decision World Athletics, the governing body for the sport, says is inconsistent with rules allowing up to 10,000 spectators in Tokyo venues, many indoors.

July 8: Olympic organisers decide to hold the Tokyo Games without spectators under coronavirus restrictions as Japan struggles to stem a new wave of infections with a state of emergency in Tokyo.