Ten people have been wounded and 26 are missing after a landslide in southern Norway, police said.

One of the victims was critically injured and more than a dozen buildings were swept away early on Wednesday in the municipality of Gjerdrum, about 19 miles north of Oslo.

The missing people were from homes in Ask village, the centre of the landslide, but police said it was not clear if they had been trapped in their houses, were away at the time or managed to escape. 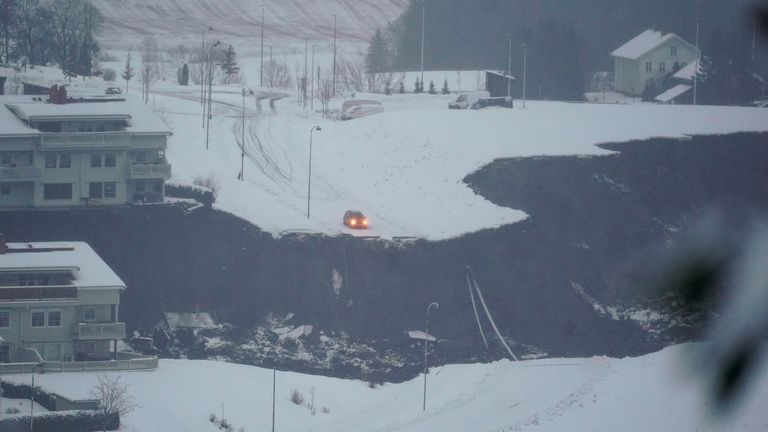 Photos taken by a rescue helicopter showed a large crater above destroyed buildings.

Norwegian Prime Minister Erna Solberg told broadcaster TV2 it should have been a New Year’s weekend with “peace and quiet”.

“And maybe we should have worried most about COVID-19… not whether we have missing persons from a landslide,” he said.

Police said the area remains unstable for now and can only be accessed by helicopter.

Some 40 ambulances were sent to the scene and there was a risk of more landslides as masses of earth were still moving, Torild Hofshagen from the Norwegian Water Resources and Energy Directorate said. He added the slip was one of the largest slides in recent Norwegian history.

The clay soil in the area may have shifted due to the recent high levels of precipitation, broadcaster NRK reported.

Kjetil Aamann – who lives 164ft from the edge of the landslide – told TV2 he was woken by the sound of a helicopter overhead shortly after 4am, before police called to tell him to evacuate.

The area around Ask is known to be landslide-prone due to having a lot of so-called quick clay, which can change from solid to liquid form.

With people still missing, Ms Solberg tweeted that it was important emergency services “get their job done”.

“It hurts to see how the forces of nature have ravaged Gjerdrum. My thoughts go to all those affected by the landslide,” she wrote.