Queensland’s top doctor has urged people to consider wearing masks if they can, as a cluster of virus cases grows and new restrictions are put in place to contain it.

Four new COVID-19 cases were added to the list on Sunday, all of them linked to the current corrective services outbreak in south-east Queensland. 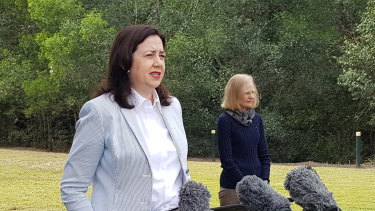 Three of the cases lived in the same Forest Lake house as two other already-diagnosed cases. One of the three new cases was a child who attended Fig Tree Pocket childcare centre, with health authorities contacting parents of other children who attend to warn them to get tested.

The fourth case was a senior student at Staines Memorial College in Redbank Plains, which announced it would close for two weeks for cleaning and to allow staff to be tested for the virus.

"The student is still at this point not displaying any symptoms, so there is no suggestion that he or his family have done anything untoward," acting principal Nick Makin said in a statement.

"Due to the potential for broader infection within our community, the health authorities are proposing to close the school for 14 days and will implement a series of cleaning and testing protocols.

"Our staff will undergo testing themselves over the next couple of days and they will also take those couple of days to prepare for a resumption of off-campus learning, similar to the process we followed in Term Two."

Health officials believe the outbreaks at the Queensland Youth Detention Centre at Wacol and the Queensland Corrective Services Academy are one cluster, after a case was found that linked the two.

The state’s Chief Health Officer, Dr Jeannette Young, said while she was still not mandating the use of masks, they were very useful if people were not able to socially distance.

"I’ve been saying for several days that masks are a good thing, they’re an additional protective factor. They should only be used when you can’t do all the other things," Dr Young said.

"They’re not as good as social distancing, but if you can't socially distance and you’re indoors in a confined space, then a mask is a good thing."

Dr Young said she was pushing for the use of masks more enthusiastically now because there is now a ready local supply of available.

"If you remember back in March, the majority of the world’s masks were being made in Wuhan [where the virus is thought to have originated] and we couldn’t get them," she said.

"So for me to go out and suggest to people they should wear masks back in March would have been impossible, but now we have them so we should use them."

Dr Young said the cluster was "growing" and there would likely be more cases, but she was confident the outbreak could be contained if people adhered to social distancing and other restrictions.

"We have now had over 101 days [worth] of infectious people out in our community in the past 14 days [the number of infected people multiplied by the number of days they were out in the community while infectious]," Dr Young said.

"So that means there have been 101 opportunities for people to get infected, so we know we will see more cases."

Over 10,000 tests were done in the 24 hours to Sunday alone, which Dr Young said was excellent, and she encouraged anyone with symptoms to get tested.

She said there were no immediate plans to impose tighter restrictions in areas that already have gathering limits, and no plans to reintroduce movement restrictions.

From 8am on Monday, gatherings in private homes and public places in the Western Downs, South Burnett, Cherbourg, Toowoomba, Goondiwindi, and Southern Downs council areas will be limited to 10 people, while restrictions on access to aged-care facilities will also apply.

Venues with COVIDSafe plans will still be able to operate as normal.

The Brisbane, Ipswich, Redland, Moreton Bay, Logan, Gold Coast, Lockyer Valley, Scenic Rim and Somerset local government areas already have these restrictions in place, while the rest of the state has gathering limits of 30 people.

Dr Young encouraged people to continue to work from home wherever possible to prevent the virus spreading in offices, although she also said it was far more likely for people to catch it at social gatherings.

Queensland Premier Annastacia Palaszczuk, meanwhile, said she had not seen any suggestion from the Prime Minister over a multi-tiered approach to border closures.

Scott Morrison suggested that a "traffic light" system of staggered restrictions similar to one used in Denmark could be put in place, and he threatened to push it into action if the states did not agree.

Ms Palaszczuk said she had not been contacted by Mr Morrison about the plan.

"He hasn’t put any proposal to us yet. I’ll have a look at the proposal, but I want to make it very clear – we will do everything we can to protect Queenslanders," she said.

"The closure of our borders has been one of the most effective measures we have in combating this virus. We know people wanted us to open our borders earlier, and we know we would have seen a situation similar to what is happening in Victoria if that had occurred."

Queensland has 28 active cases out of a total of 1121 since the pandemic began.