The latest round of fiscal stimulus negotiations between House Speaker Nancy Pelosi and Treasury Secretary Steve Mnuchin has yielded little progress. The two sides are about $600 billion apart in determining the price tag of the next tranche of financial relief, which would likely include more stimulus checks and enhanced unemployment benefits.

The need couldn’t be more pressing. The job market is deteriorating, as another 837,000 Americans filed for unemployment for the first time last week.

“We are setting new records for job cuts even though things have improved since the earliest days of the pandemic,” said Andrew Challenger, senior vice president of Challenger, Gray & Christmas. 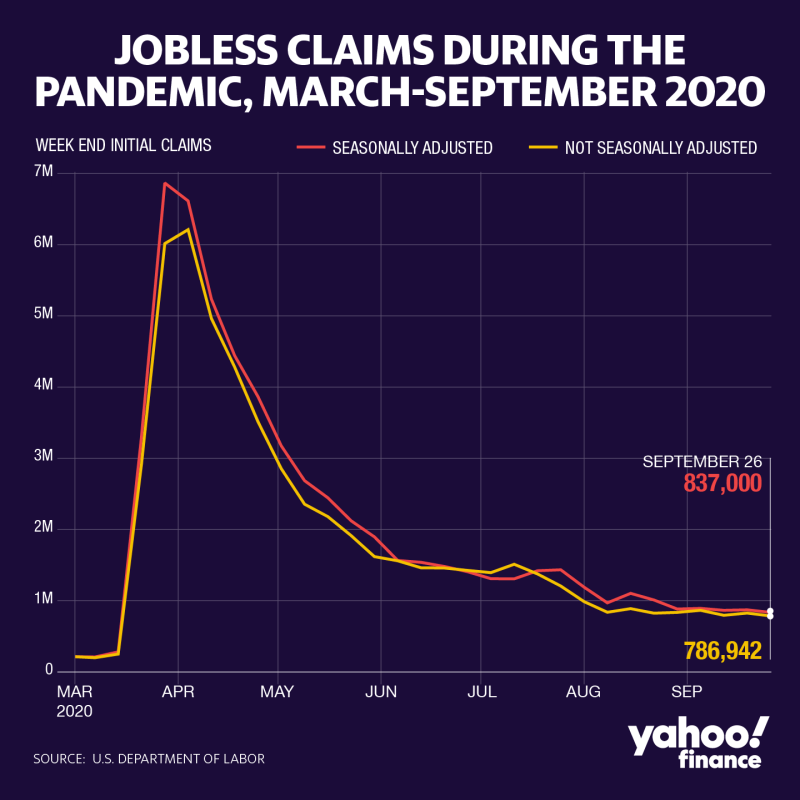 “These are uncertain times for everyone, as many states are experiencing an uptick in the number of COVID-19 cases. It is clear we still have a long way to go before many industries can return to normal,” said Challenger.

Major U.S. airlines have been warning for months that failure to obtain another round of fiscal relief would result in mass layoffs. Now American (AAL) and United Airlines (UAL) said they will move forward with plans for more than 32,000 layoffs.

Airlines have asked the government for another $25 billion in aid to protect jobs once the current CARES Act package, which prevented airlines from cutting jobs, expired on Oct. 1.

U.S. airlines are operating 52% fewer flights than they were last year and losing $5 billion in cash every month, according to Airlines for America. The dramatic downturn in air travel this year caused by Covid-19 “will result in a loss of up to 46 million jobs normally supported by aviation around the globe,” according to the Air Transport Action Group.

Wall Street has not been immune from layoffs this week. At the outset of the pandemic, several big banks including Goldman Sachs pledged to hold back on layoffs. On Wednesday Goldman Sachs (GS) said it’s planning to eliminate 400 jobs, or 1% of its workforce, according to a Bloomberg report.

Citigroup informed at least three managing directors on Tuesday that their jobs would be cut. Further layoffs are imminent. In a statement to Yahoo Finance, Citigroup (C) said the bank “made organizational changes to [its] Equities business over the last several months to capitalize on [its] investments in talent and technology.” The bank says layoffs will affect less than 1% of its global workforce.

Oil producers and refiners have also reduced the size of their workforces during the pandemic as a result of plummeting demand for fuel. Marathon Petroleum, (MPC) one of the country’s largest refiners, became the latest to inform employees about layoffs, with plans to reduce its workforce by at least 6%.

This week Disney said it would permanently let go of 28,000 furloughed workers, including employees in executive, salaried and hourly positions across its parks, experiences and consumer products division.

The company, which has reopened theme parks in Shanghai, Hong Kong, Paris, and Florida, blamed the financial toll of restrictions and ongoing closures at other locations for needing to take such drastic measures.

In the third quarter, Disney (DIS) reported a $3.5 billion loss in operating income at its parks, products, and experiences division.

So many young adults living with parents will have ‘serious consequences’ for financial markets: Deutsche Bank