ANKARA/ISTANBUL (Reuters) – Istanbul’s new mayor now shoulders the expectations of Turkey’s long-subdued opposition after he emerged from obscurity to deal President Tayyip Erdogan the biggest election blow of his career. 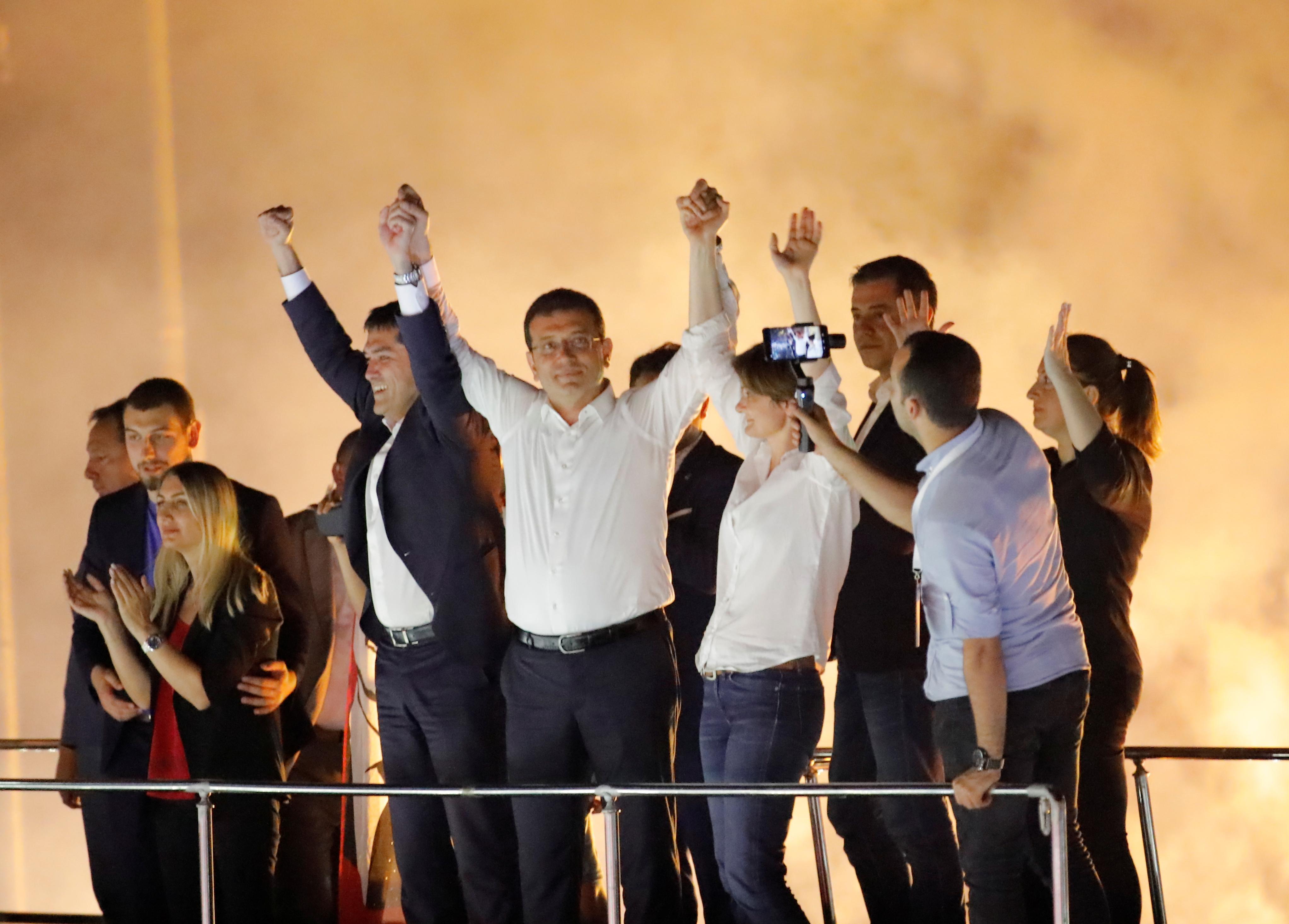 Ekrem Imamoglu of the Republican People’s Party (CHP) won a decisive victory on Sunday, his second in three months after authorities annulled an earlier vote. His first task is to take the reins from Erdogan’s AK Party which, along with its Islamist predecessor parties, has run the city for 25 years.

But after winning over some AKP voters and increasing his initial razor-thin victory margin 60 times, Imamoglu’s back-to-back victories have led to talk that he could use Istanbul as a platform to challenge Turkey’s all-powerful president.

Erdogan himself served as mayor of Turkey’s largest city before launching onto the national stage to become the country’s dominant political leader. The months-long controversy over the re-run municipal election has already earned Imamoglu recognition well beyond Istanbul.

His inclusive campaign contrasted with the combative and confrontational AKP rallies, and as a practicing Muslim representing a traditionally secularist party, he has also blurred the sharp dividing lines of Turkey’s polarized politics.

So far Imamoglu, 49, has dismissed rumors that his victory could prompt a presidential bid, saying he is focused on the five-year mayoral term ahead of him. Officials from the CHP have also said such an issue was not on their agenda.

“It would not be right of us to say that he has a certain plan for the future,” Suleyman Celebi, a CHP lawmaker in Istanbul who worked on Imamoglu’s campaign told Reuters.

“We must not be in a position where we say that we earned a victory and are therefore seeking something else at this stage.”

However, a victory speech to hundreds of thousands of supporters on Sunday night was seen by some as a prelude to a potential presidential bid by Erdogan’s chief antagonist.

“I am calling to all my citizens: Yes, I am a project. I am a project of the Republic, of the Republic of Ataturk,” Imamoglu said, referring to the founder of modern Turkey, Mustafa Kemal Ataturk. “Partisanship is over now. There is merit and ethics, rights, law and justice from now on.”

Translating victory in a single city onto the national political map would put Imamoglu up against a giant of modern Turkish politics who – despite recent setbacks – has still triumphed in more than a dozen elections since 2002.

“The key question is whether the Erdogan administration moves on and focuses on urgently required economic reforms or intensifies efforts to prevent Imamoglu from using his mayorship to build a much stronger political momentum to challenge Erdogan and the AKP for power in the 2023 parliamentary and presidential elections,” said Michael Every, senior strategist at Rabobank.

Some of Imamoglu’s opponents, who believe his ultimate ambition goes beyond Istanbul, say he would be over-reaching if he tries to challenge Erdogan.

“From the image he’s built, Imamoglu does not appear to be aiming to remain a mayor,” said a senior AKP official who declined to be named. “He will probably try to continue his political career with a presidential bid. Efforts on that front will be very difficult for him.”

He already faces significant challenges in Istanbul, where he will have to tackle the possibility of years of friction between the presidency and the country’s commercial hub.

With the AKP holding the majority of seats in the municipal council as well as overall control of the country, Erdogan has said Imamoglu may not be able to carry out his plans.

“It won’t be that easy for him to work as mayor,” the AKP official said. “There will be difficulties stemming from the fact that he’s not from the same party as the central government.”

The CHP said any efforts to shackle Imamoglu may backfire on the AKP, given that one of Imamoglu’s first acts in his 18 days in office before his first mandate was annulled was to broadcast all municipal council sessions live on social media.

“Let them go ahead and oppose these (projects) and block something that will benefit the people. When they do such a thing, the place they will fall to politically will be very negative,” CHP Deputy Chairman Oguz Kaan Salici told Reuters.

Yet Imamoglu, a former businessman and mayor of an Istanbul district, is riding a wave of hope for an opposition that has suffered years of defeat and disappointment.

With his upbeat slogan – “Everything will be great” – he energized supporters and attracted voters beyond his party’s core constituency.

On election night Imamoglu addressed Erdogan directly to say he is ready to work “in harmony” with the president to solve Istanbul’s problems, which range from concerns over millions of Syrian refugees to a traffic deadlock.

If Imamoglu aims to keep the path to a 2023 presidential run open, he will have to keep doors open to other parties. In Istanbul, his party ran in alliance with the breakaway Iyi Party nationalists and possibly had decisive help from the pro-Kurdish HDP party which did not field a candidate.

Those arrangements would be tough to replicate nationally, but Imamoglu showed on Sunday he can break down party divisions, attracting about 4% of those who voted for his AKP rival in March, based on the results and polling by Istanbul Economics.

“Those who used the language of love, a positive rhetoric and approached everyone without discrimination won,” CHP Deputy Chairman Muharrem Erkek told Reuters.