London: The Queen is facing the prospect of further damaging revelations during her Jubilee year with the announcement of a new royal biography by Tina Brown, the former Vanity Fair editor, based on “years of research and intimate access”.

Brown, author of The Diana Chronicles, a bestseller, will publish The Palace Papers: Inside the House of Windsor – The Truth and the Turmoil, next April. The book will chart the 25 years since the death of Diana, Princess of Wales, from the Queen’s “loosening grip” on the institution to the departure of Prince Harry and his wife Megan, the Duke and Duchess of Sussex. 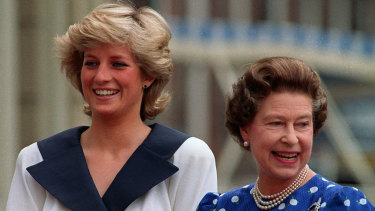 Diana, Princess of Wales, left, and Queen Elizabeth II smile to well-wishers in London in 1987.Credit:AP

It also promises to explore the tension between Harry and his brother Prince William, the ascendance of the “resolute” Duchess of Cambridge – William’s wife Catherine – and the abuse allegations surrounding their uncle Prince Andrew, the Duke of York, and the convicted sex offender, Jeffrey Epstein.

It will be released just a few months before the Harry’s own intimate memoir, in which he will share the “definitive account” of his life. His book was announced in July, to the shock of senior members of the Royal family, and is due to be published in late 2022.

Both books threaten to cause ructions during the Queen’s Platinum Jubilee year.

The Palace Papers will be published in the UK by Century, an imprint of Penguin Random House, which is also publishing Harry’s book. 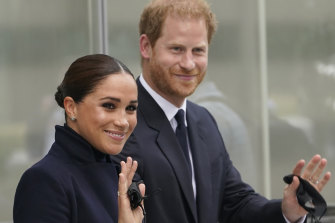 Penguin claimed it would “tell the real story” of the Windsors since 1997. The publisher said it was “full of powerful revelations, nuanced details and searing insight” and would “irrevocably change the way readers perceive and understand the Royal family”. Brown said: “This is, above all, the survival story of a family in which the pre-eminence of duty is in constant tension with the very human desires of love, ambition and the longing for escape. Writing it has been a fascinating journey.“

Ben Brusey, publishing director at Century, added: “The Palace Papers is a tour de force in every sense – the most insightful, enjoyable and substantial account of the Royal family I have read.

“Only Tina Brown could have written it, with her impeccable sources and deep knowledge of the institution. Tina masterfully takes readers inside the palace walls, and to a place of understanding that Netflix’s The Crown could only dream of. Publishing in extraordinary times for the Royal family, I know The Palace Papers will add richly to the public debate.”

The Diana Chronicles, published in 2007, is often described as the definitive biography of the late princess and is based on more than 250 interviews with members of her inner circle.

Brown is a former editor of Tatler and The New Yorker, and founding editor of The Daily Beast.