As I climbed the narrow metal steps on the edge of the skyscraper, the safety harness that kept me attached to the building — nearly 1,300 feet up — kept clicking, like a roller-coaster heading toward its first drop.

Looking around on a recent fall day, I could see New York City spread out below me in the early morning light. To the south, One World Trade Center appeared at eye level in the distance. To the east, the needle spire of the Empire State Building. To the west, as our guide, Anissa Barbato, pointed out, even New Jersey looked good.

This was City Climb, an attraction opening Tuesday at 30 Hudson Yards, one of the city’s tallest buildings. It gives thrill-seekers a unique perspective on New York that no observation deck could hope to match: No walls, no glass windows, no railings. Just skyline. 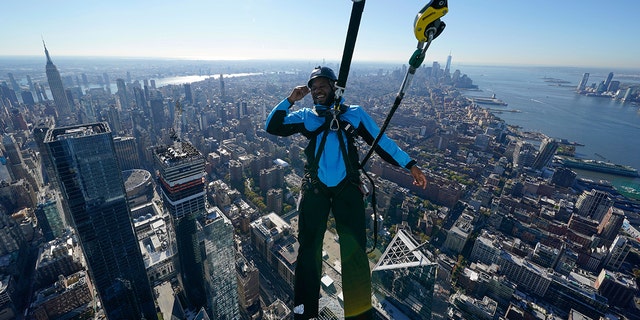 Climb guide Jason Johnson leans off the edge at the top of City Climb, a new attraction at 30 Hudson Yards in New York on Nov. 3.
(AP Photo/Seth Wenig)

COLUMBIA UNVERSITY EMPLOYEES CAN BE DISMISSED FOR USING WRONG PRONOUNS

The $185-per-person experience starts with climbing groups of up to eight taken through a series of safety protocols, including a Breathalyzer test. They’re then outfitted in bright blue full body suits meant to ensure that nothing can fall off their person to the streets below.

Climbers are equipped with specially designed safety harnesses that let them ascend an outdoor staircase, from the first lookout known as the Cliff, to the top platform called the Apex, located 1,271 feet  above 10th Avenue.

There, they can lean out over the edge and look down at the Empire State Building. City Climb will operate rain, snow or shine, but will close if the temperature drops below 23 degrees Fahrenheit  or if there is dangerous weather in the area.

Setting off on our climb, my stomach tightened as soon as the gate saying “Restricted Area” opened onto the Cliff. My hands, tingling with nervous anticipation the night before, were numb in the cold as I walked the 161 steps on the exterior edge of the building’s distinctive triangle top.

I looked down on the Hudson Yards plaza and the streets next to it, where the cars looked like ants.

When I got to the Apex, Barbato, the attraction’s manager, welcomed me: “We are at the top of the world.”

Then, she leaned back, arms stretched out, hanging over the city as a tether kept her from falling to the streets below.

“Put your heels on the edge, bend your knees, and push out,” one of the guides said, when it was my turn. 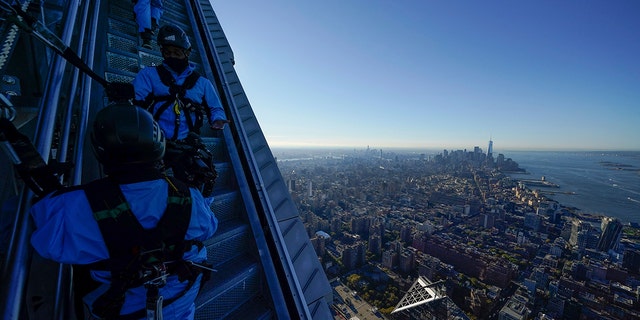 Employees at City Climb escort a group of journalists to the top of the new attraction at 30 Hudson Yards in New York on Nov. 3.
(AP Photo/Seth Wenig)

I did as instructed. And then, it was time to hold my arms out.

I wasn’t sure I wanted to let go, but everyone’s eyes were on me. My mind jumped back to a time I went bungee jumping in college nearly 20 years ago. I hesitated then, and always kind of regretted it.

So, I let go. It wasn’t that bad, as long as I didn’t think about the fact that nearly 1,300 feet below — a nine-second fall — was 30th Street and certain death.

Barbato said they expect a mix of thrill-seekers and people trying to prove to themselves that they can overcome their fear of heights. 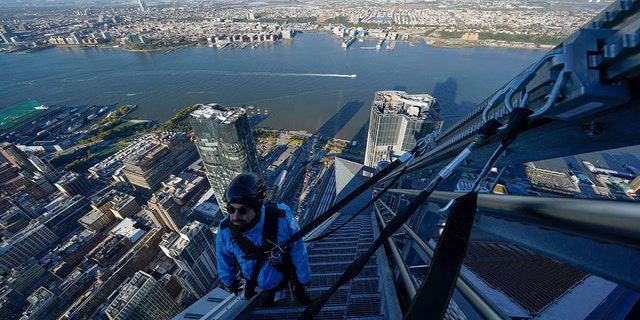 Maintenance technician Enzo Gentile helps escort a group of journalists to the top of the new City Climb attraction at 30 Hudson Yards in New York on Nov. 3.
(AP Photo/Seth Wenig)

“We’re going to have those urban explorers who are really just looking for something wonderful to do in New York City,” said Barbato. “We’re also then going to have those people who really want to prove to themselves that they can overcome not only their fears but their hurdles. This is going to be a magnificent, life changing experience for some people.”

After what seemed like minutes — 30 or 40 seconds, in reality — I grabbed the harness and pulled myself back in. I’m not afraid of heights, but I respect them: Once I was back firmly on the platform, it did feel like a bit of an accomplishment.