Jerusalem: Benjamin Netanyahu has returned to power for an unprecedented sixth term as Israel’s prime minister, taking the helm of the most right-wing and religiously conservative government in the country’s 74-year history.

The swearing-in ceremony on Thursday (Friday AEDT) capped a remarkable comeback for Netanyahu, who was ousted last year after 12 consecutive years in power. But he faces numerous challenges, leading an alliance of religious and far-right parties that could cause domestic and regional turmoil and alienate his country’s closest allies. 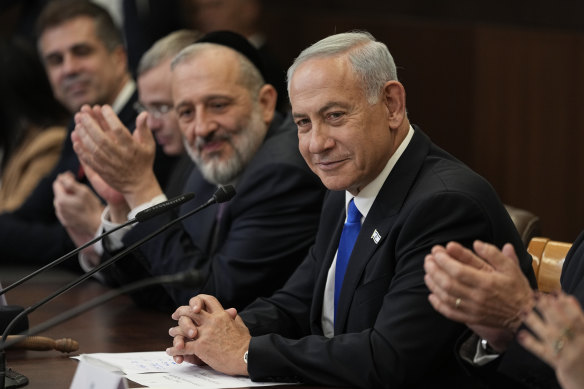 His new government has pledged to prioritise settlement expansion in the occupied West Bank, extend massive subsidies to his ultra-Orthodox allies and push for sweeping reform of the judicial system that critics say could endanger the country’s democratic institutions. The plans have sparked an uproar in Israeli society, prompting criticism from the military, LGBTQ rights groups, the business community and others, and raised concerns abroad.

In a stormy parliamentary session before his swearing in, the combative Netanyahu took aim at his critics, accusing the opposition of trying to scare the public.

“I hear the constant cries of the opposition about the end of the country and democracy,” Netanyahu said from the podium. “Opposition members: to lose in elections is not the end of democracy, this is the essence of democracy.”

His speech was interrupted repeatedly by boos and jeers from his opponents, who chanted “weak, weak” – an apparent reference to the numerous concessions he made to his new governing partners.

Later, Netanyahu held a brief meeting with his new cabinet, saying his priorities would include halting Iran’s nuclear program, strengthening law and order and combatting the country’s high cost of living, and expanding Israel’s burgeoning relations with the Arab world.

“I am emotional because of the great trust the people of Israel gave us,” he told the ministers, adding that he was excited to work with the “excellent team” he has assembled. “Let’s get to work.”

Netanyahu is the country’s longest serving prime minister, having held office for a total of 15 years, including a stint in the 1990s. After four consecutive inconclusive elections, he was ousted last year by a coalition of eight ideologically diverse parties united by little more than their opposition to his rule.

That coalition collapsed in June, and Netanyahu and his ultra-nationalist and ultra-Orthodox allies secured a clear parliamentary majority in the November election.

The country remains deeply divided over Netanyahu, who remains on trial for charges of fraud, breach of trust and accepting bribes in three corruption cases. He denies all charges, saying he is the victim of a witch hunt orchestrated by a hostile media, police and prosecutors.

Netanyahu now heads a government consisting of a hard-line religious ultra-nationalist party dominated by West Bank settlers, two ultra-Orthodox parties and his nationalist Likud party. They have endorsed a set of guidelines and coalition agreements that go far beyond the goals he outlined on Thursday and, some say, risk imperilling democratic institutions and deepening the conflict with the Palestinians. 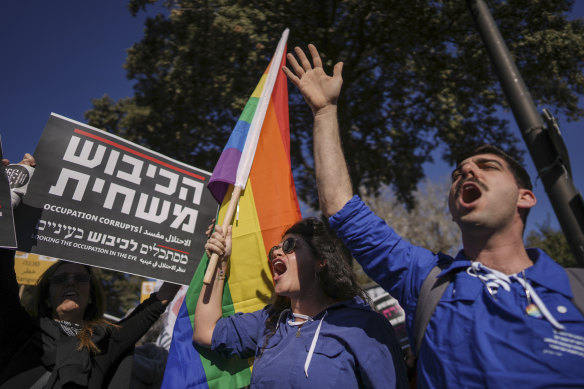 Protesters waving a rainbow flag and a sign that reads in Hebrew “the occupation corrupts” protest Benjamin Netanyahu’s new government in front of Israel’s Parliament in Jerusalem on Thursday.Credit:AP

Long a hardliner towards Palestinians, Netanyahu already is a strong proponent of Jewish West Bank settlements. That is only expected to be kicked into overdrive under the new government. Netanyahu has created a special ministerial post giving a firebrand settler leader widespread authority over settlement policies. The coalition’s platform says that “the Jewish people have exclusive and indisputable rights” over the entirety of Israel and the Palestinian territories and promises to make settlement expansion a top priority.

That includes legalising dozens of wildcat outposts and a commitment to annex the entire territory, a step that would snuff out any remaining hopes for Palestinian statehood and draw heavy international opposition.

Israel captured the West Bank in 1967 along with the Gaza Strip and east Jerusalem – territories the Palestinians seek for a future state. Israel has constructed dozens of Jewish settlements that are home to around 500,000 Israelis who live alongside around 2.5 million Palestinians. 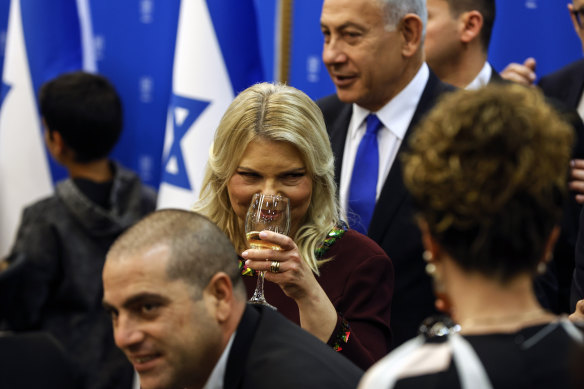 Israeli Prime Minister Benjamin Netanyahu, background, and his wife Sara, centre, toast the new speaker of the knesset, Amir Ohana, at the Knesset.Credit:AP

Most of the international community considers Israel’s West Bank settlements illegal and an obstacle to peace with the Palestinians. The United States already has warned the incoming government against taking steps that could further undermine hopes for an independent Palestinian state.

President Joe Biden called Netanyahu his “friend for decades” and said he looked forward to working with him “to jointly address the many challenges and opportunities facing Israel and the Middle East region, including threats from Iran”.

But, Biden warned, the US will “continue to support the two-state solution and to oppose policies that endanger its viability or contradict our mutual interests and values”.

At home, the new government has alarmed good-governance groups with its plans to overhaul the legal system – including a proposal that would curb the power of the independent judiciary by allowing parliament to overturn Supreme Court rulings. Critics say this will destroy the country’s system of checks and balances and clear the way for Netanyahu’s criminal trial to be dismissed. 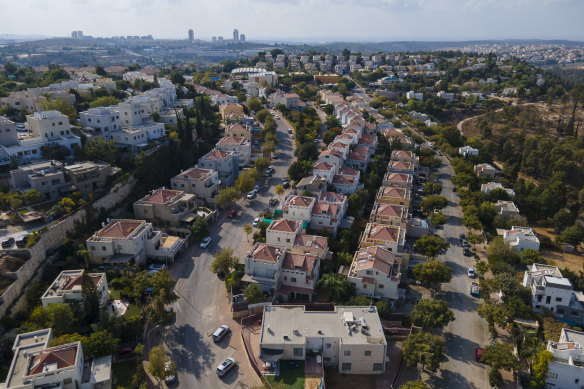 A view of the Jewish West Bank settlement of Kfar HaOranim, where Major General Hertzi Halev, chief of staff of Israel’s military since October, lives.Credit:AP

There are also concerns about the rollback of minority and LGBTQ rights. Members of the Religious Zionism party said they would advance an amendment to the country’s anti-discrimination law that would allow businesses and doctors to discriminate against the LGBTQ community based on religious faith.

Outside parliament, several thousand demonstrators waved Israeli and rainbow gay pride flags. “We don’t want fascists in the Knesset!” they chanted. Crowds of LGBTQ supporters shouting “Shame!” blocked the entrance to a major intersection and highway in Tel Aviv.

But Netanyahu has promised he will protect minorities and LGBTQ rights. Amir Ohana, a Netanyahu loyalist, was voted in as the first openly gay speaker of parliament as his partner and their two children watched from the audience.

Onstage, Ohana turned to them and promised the new government would respect everyone. “This Knesset, under the leadership of this speaker, won’t hurt them or any child or any other family, period,” he said.

LGBTQ groups welcomed Ohana’s appointment, but feared the new government was using his appointment as a smokescreen to reverse gains the community has made in recent years.

Yair Lapid, the outgoing prime minister who is now in the post of opposition leader, told parliament he was handing the new government “a country in excellent condition, with a strong economy, with improved defensive abilities and strong deterrence, with one of the best international standings ever.”

“Try not to destroy it. We’ll be back soon,” Lapid said.