Athens: A Greek court has ruled that Greece's once popular neo-Nazi party Golden Dawn is a criminal group in a decision that closes a five-year trial. 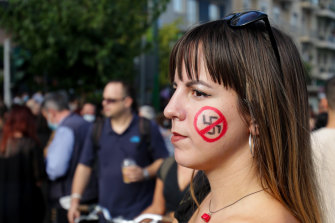 A woman sports an anti-fascist face marking during a protest outside the Golden Dawn trial in Athens, Greece.Credit:Getty Images

It became Greece's third most popular party but started to lose ground in 2013 after a supporter was arrested for the murder of Pavlos Fyssas, a rapper and leftist activist, who was chased down and stabbed to death in an Athens suburb.

"With today's decision, a traumatic cycle in the country's public life comes to an end," said Prime Minister Kyriakos Mitsotakis. "As in the ballot, this Nazi group was also convicted by the court."

A crowd of around 20,000 people, gathered outside the appeals court, cheered when the verdict was handed down, waving placards that read "crush the Nazis" and "death to fascism".

The jubilant mood soured, however, when small groups of youths threw petrol bombs and stones at police, who fired tear gas at them. 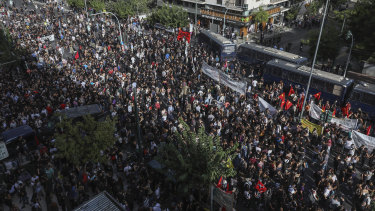 Thousands of people gather for an anti-fascist demonstration outside court in Athens on Wednesday.Credit:AP

The crowd moved to Syntagma Square outside the Hellenic Parliament but eventually dispersed.

"In the conscience of the Greek people, Golden Dawn is a criminal organisation and will go where they must, in the dustbin of history," said Alexis Tsipras, the former prime minister and leader of the leftist Syriza party.

Kyriakos Mitsotakis, the current prime minister, said: "With today's decision, a traumatic cycle in the country's public life comes to an end.

"Democracy has won but it is up to us that it keeps winning every day."

There were 68 defendants on trial, including 18 former Golden Dawn MPs. 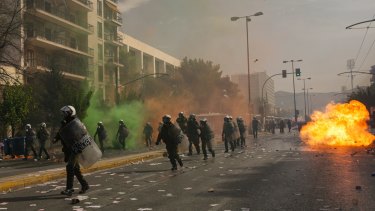 Riot police during clashes outside a court where the trial of leaders and members of the Golden Dawn far-right party was held in Athens, Greece. Credit:Getty Images

The court ruled that seven of them, including the party's head, Nikos Michaloliakos, were guilty of leading a criminal organisation.

The others were found guilty of participating in a criminal organisation.

A truck driver and supporter of Golden Dawn was found guilty of murdering Fyssas, the rapper.

The lengthy trial had assessed four cases rolled into one: the fatal stabbing of the rapper, attacks on Egyptian fishermen in 2012 and on left-wing activists in 2013, and whether Golden Dawn was a criminal organisation.

The rapper's mother, who attended almost every court hearing over the last five years, rejoiced as she left court. 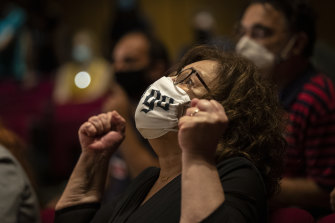 Magda Fyssa, the mother of late Greek rap singer Pavlos Fyssas, who was stabbed and killed by a supporter of the extreme right Golden Dawn party in 2013 reacts in court.Credit:AP

"You did it, my son," said Magda Fyssa, applauding the verdict. "We won a battle but are continuing the fight."

The defendants will be sentenced in the next few days. Those convicted of leading a criminal organisation face up to 15 years in prison, while the others face up to 10 years.

"This verdict sends a clear message to political groups with aggressive anti-migrant and anti-human rights agendas in Greece and across Europe that violent and racist criminal activity will not go unpunished," said Nils Muiznieks, Amnesty International's Europe director.

Golden Dawn MPs had insisted they had no direct links to the murder and attacks, and said the charges were politically motivated. They said the trial was a "travesty".

"The verdict confirms that democracy and its institutions maintain their capacity to bring down any attempt at subverting it," said Greek President Katerina Sakellaropoulou.