Neighbours have told of the horror after they saw a young boy covered in blood being led out of a flat where police shot dead a man in his 20s after they forced entry to find the dead body of another man.

A child was also found seriously injured inside the flat in Milton Keynes, Buckinghamshire.

But it was when the officers encountered a young man inside the property that they say they were forced to use a Taser before shooting him.

The drama began shortly after 9.30am on Saturday morning in Denmead, a normally quiet cul-de-sac in Two Mile Ash. 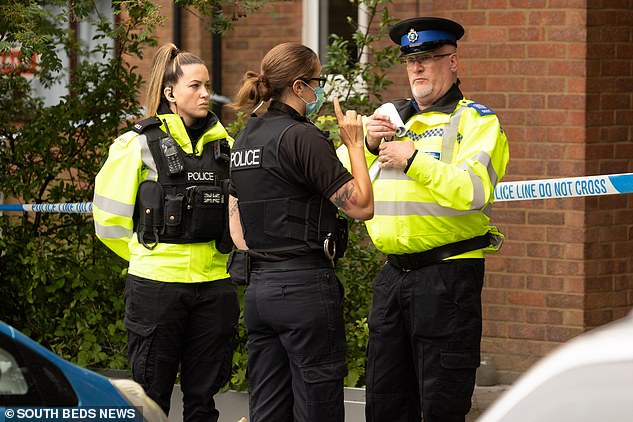 Officers (pictured on the street this morning) were called to the scene at 9.40am on Saturday morning after reports of a serious incident in the quiet residential street 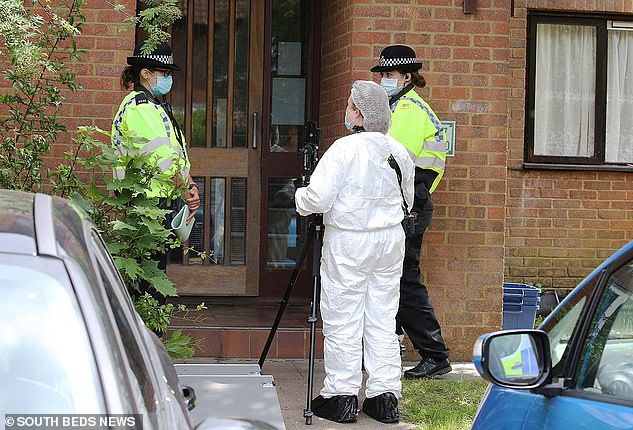 Shocked officers spotted a man in his 30s who appeared to have died as well as a young child with serious injuries inside the building on Denmead, Two Mile Ash, Milton Keynes

Thames Valley Police say officers were called to the address in Milton Keynes having received information that a serious disturbance was taking place at around 9.40am

Minutes after arriving in the road and speaking to a witness, officers ran to the entrance of the flat believed to be situated on the second floor of the three story building.

Today neighbours said one officer carried out a young girl who wasn’t injured and another officer then walked out a young boy, thought to be aged around six or seven, who had blood on his face.

He was taken to a waiting ambulance which took him to hospital. It is believed both children lived at the flat where the shooting took place. 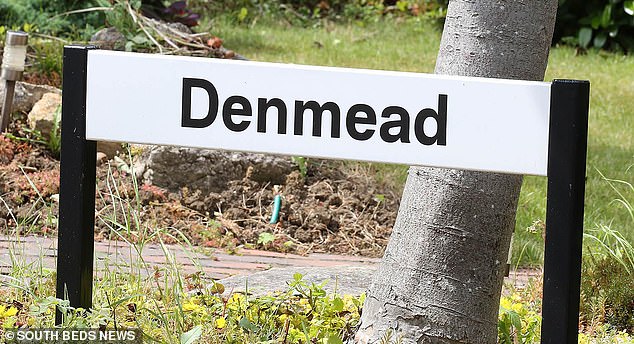 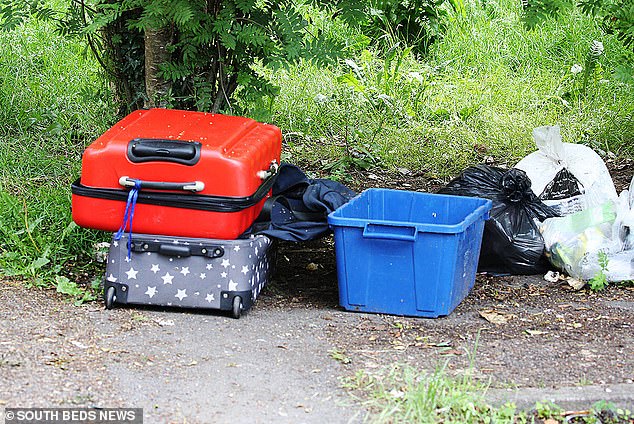 The shooting has been referred to the police’s independent watchdog, the Independent Office for Police Conduct (IOPC), to investigate how the officers came to shoot the man

Neighbours said that a man and woman, believed to be their parents, moved into the flat only recently.

One man who didn’t want to be named said: ‘My wife was taking the rubbish out and that’s when she heard a scream. It was a man screaming and then she saw a police officer bring a young boy out and she could see blood on the boy’s face or head.

‘It’s such a horrible thing to have happened and I’m thinking about putting security cameras on my home. You wonder if it’s gang related.’

Living opposite the flat where the shooting occurred, Open University worker Hannah King, 38, said: ‘I heard a really loud noise, like an explosion and at first I thought someone was trying to break into my home. It was really loud and I suppose it could have been a shot.’ 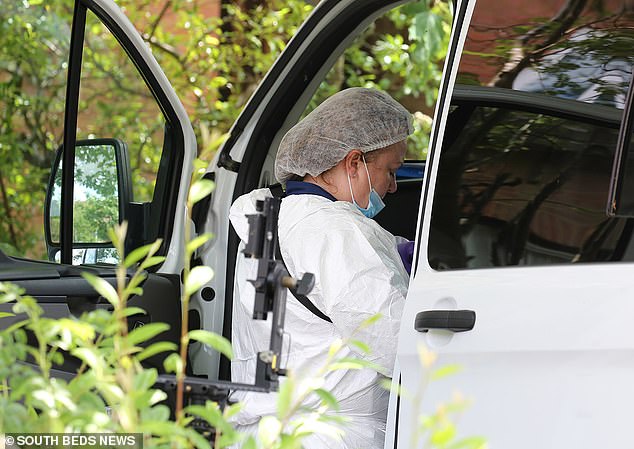 Pictured: A forensic officer at the scene of the shooting today 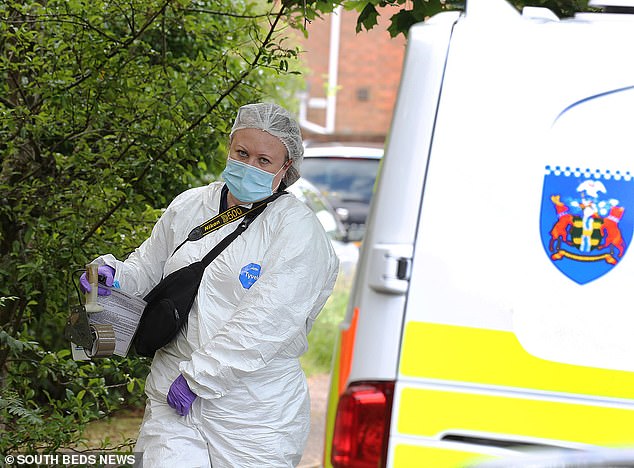 Pictured: A police cordon remained in place today and forensic officers were seen at the scene

She went on ‘It’s always been such a lovely place to live. There is a nice mixture of people and loads of children around and you hear lots of languages.’

Another man living nearby said ‘I think the people in the flat had only been living here a few months. They seemed a normal couple and I would see them with the children, the boy and the girl.

Whenever I saw them I would say hi and they would say hello, they were quite friendly.’ 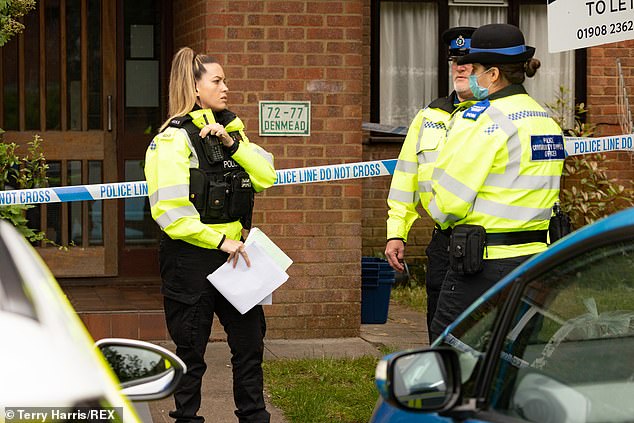 Pictured: Officers at the scene this morning 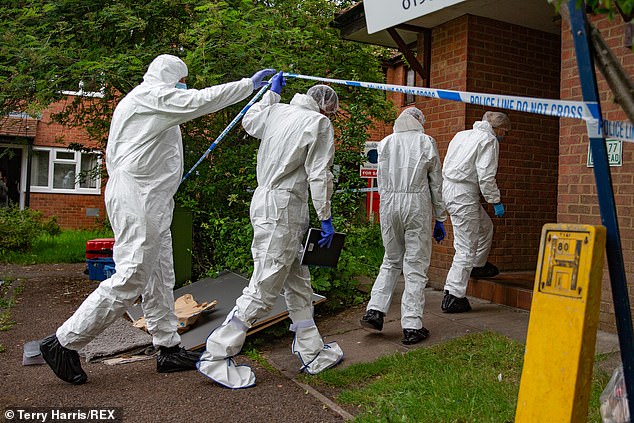 Forensic officers enter a property on Denmead in Milton Keynes

‘I remember when we had snow this year the children played outside together. I didn’t know their names or the names of the couple, but they seemed just normal and obviously affectionate with each other.’

The woman who wore her hair in braids or cornrows was often seen in the mornings pushing the younger daughter in a buggy with the older boy walking beside his mum.

One man living in the cul-de-sac said his wife had seen the young boy being brought out of the flat by police.

He had blood in his face but he wasn’t crying and my wife said he had a look of shock on his face.

In a statement Thames Valley Police said they had launched an investigation following a serious incident in Milton Keynes.

They said officers had gone to the address on Saturday morning after receiving information that a serious disturbance was taking place at the address. 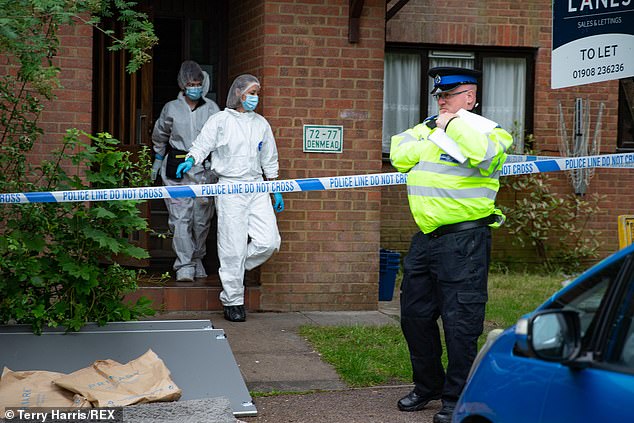 Officers are still at the scene today

The force said a forced entry was made into a property by officers acting on witness information.

The statement continued: ‘On entry officers observed a man in his thirties, who appeared to be deceased, as well as a young child with serious injuries.

‘They encountered a man in his twenties, within the property. At this early stage of the investigation, it is understood that officers deployed Taser, before shots were fired at the man.

‘Immediate first aid was deployed and ambulance crews treated the man in his twenties, but sadly he was later pronounced dead at the scene.’

A mandatory referral has been made to the Independent Office for Police Conduct (IOPC) who have have launched an independent investigation.

The police said ‘The young child was taken from the property and was taken to hospital with serious injuries, where they remain. 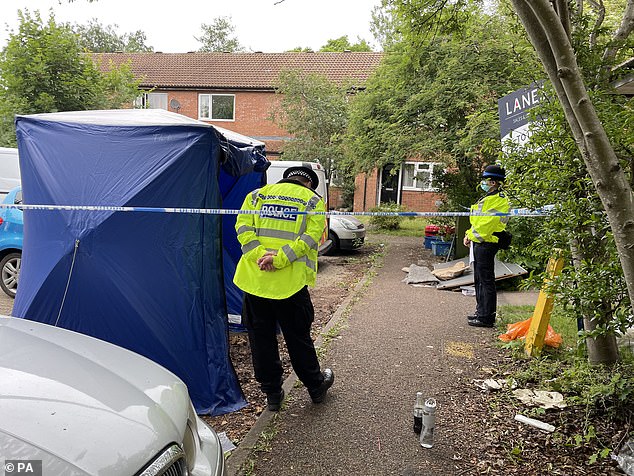 ‘The man in his thirties was sadly also confirmed dead at the scene.

‘The next of kin of both men have been informed.’

Police say a scene watch is in place around the address in Denmead and is likely to be in place for a number of days.

Assistant Chief Constable Christian Bunt, said in Saturday evening ‘What has happened this morning can only be described as absolutley tragic and will no doubt have an impact on the community.

‘Our thoughts are with those who have been impacted by this incident.

‘Our Major Crime Unit are working closely with the IOPC to understand exactly what has happened.

‘At this stage no one else is being sought in relation to this investigation and we are seeking to support everyone involved.

‘Members of the community will see an increased police presence. We would ask anyone who has any concerns or information to please speak to one of our uniformed officers.

‘We are also asking members of the public who may have information to please call 101 or report online quoting reference 20210626-0652 or if they wish to remain anonymous they can contact Crimestoppers on 0800 555 111.’