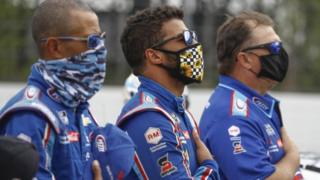 African-American Nascar driver Bubba Wallace has sent out a tweet condemning words of “hate from the president of the United States”.

Wallace is the sole full-time black driver in the US racing organisation and was instrumental in it banning the Confederate flag from races.

A noose was later found in his garage but an FBI inquiry determined “no federal crime was committed”.

President Trump called the story a hoax and suggested Wallace should apologise.

Wallace has been a vocal supporter of the Black Lives Matter movement, which has come to the fore since the death in police custody of African American George Floyd in Minneapolis in May.

The movement has sparked a campaign to remove symbols associated with slavery, imperialism and the Confederacy. President Trump has strongly defended the monuments as part of US history.

The noose is a particularly evocative symbol of hate connected to lynching.

One was found in the garage assigned to Wallace at the Geico 500 at the Talladega Superspeedway in Alabama.

Wallace, 26, received messages of solidarity from fellow Nascar drivers and sports stars around the world after the discovery and an inquiry was begun.

The FBI investigation found that the noose was in that garage as early as October 2019 and “nobody could have known Mr Wallace would be assigned the garage… last week”.

Wallace rejected suggestions the noose was a door handle, saying “what was hanging in my garage is not a garage pull”.

But President Trump on Monday tweeted: “Has Bubba Wallace apologized to all of those great Nascar drivers & officials who came to his aid, stood by his side, & were willing to sacrifice everything for him, only to find out that the whole thing was just another HOAX.”

He did not elaborate on his allegation.

He said the noose incident and the removal of the flag had caused Nascar’s “lowest ratings ever”.

Has @BubbaWallace apologized to all of those great NASCAR drivers & officials who came to his aid, stood by his side, & were willing to sacrifice everything for him, only to find out that the whole thing was just another HOAX? That & Flag decision has caused lowest ratings EVER!

Later, White House spokeswoman Kayleigh McEnany said the president was making “a broader point that this rush to judgment on the facts before the facts are out is not acceptable”.

In his tweet, which he said was being sent to “the next generation and little ones following my foot steps”, Wallace wrote: “You will always have people testing you. Seeing if they can knock you off your pedestal. I encourage you to keep your head high and walk proudly on the path you have chosen.”

He added: “Always deal with the hate being thrown at you with LOVE!… Love should come naturally as people are TAUGHT to hate. Even when it’s HATE from the POTUS.”

To the next generation and little ones following my foot steps..#LoveWins pic.twitter.com/tVaV3pkdLe

In a statement, Nascar said: “We are proud to have Bubba Wallace in the Nascar family and we commend his courage and leadership. Nascar continues to stand tall with Bubba, our competitors and everyone who makes our sport welcoming and inclusive for all racing fans.” 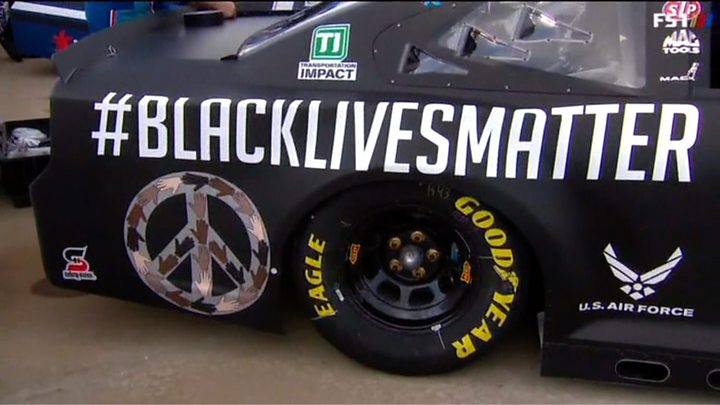