‘I didn’t think I would ever be a target’: Mother-of-three, 51, says her drink was spiked on night out that left her unable to move – and she is now ‘petrified’ it will happen to her daughters

A mother-of-three was left ‘horribly ill’ and unable to move after her drink was allegedly spiked on a night out.

Hannah Cornwall, 51, had been out with friends in the Cornish town of Newquay on November 5 when she said her drink was drugged while it was left unattended on the table.

Ms Cornwall soon found she was unable to move and her friends called a taxi for her when she became ‘horribly ill’.

The mother said she ‘did not think she would ever be a target’ and has now been left ‘petrified’ – fearing for her safety and that of her daughters.

The latest incident comes as police investigate the scale of the UK’s so-called ‘spiking epidemic’ amid a rise in claims that women have been drugged at nightclubs, bars and late-night venues using needles to inject ‘date-rape’ drugs. 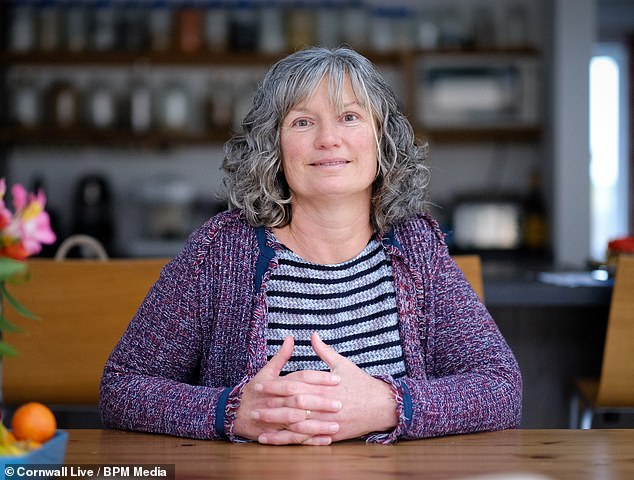 Hannah Cornwall, 51, was left ‘horribly ill’ and unable to move after her drink was allegedly spiked on a night out

Ms Cornwall said: ‘I remember looking back at my drink on the table and thinking I was drinking so slowly, whilst my other friends had already finished theirs.

‘After I came back and finished my drink we carried on having a normal evening but then my friend said one minute I was talking normally but the next minute my head was on the table and I couldn’t lift my head off.

‘My memory is quite random at this point but I remember my legs feeling heavy.

‘I kept saying was that I was so embarrassed and I couldn’t move.’

Ms Cornwall’s friends said she later became ‘horribly ill’ and so they called a taxi to take her home.

The mother-of-three added: ‘We all just thought I’d had one too many but the next day, I was talking to another friend and I said how I just couldn’t understand what happened.

‘We were just trying to make sense of it all and she said she knows that I can normally drink more than three drinks.

‘That’s when she turned to me and said she thinks I was drugged. When she said it, I knew that’s what had happened.

‘I just didn’t think I would ever be the target of anything like that because I’m 51-years-old.’

Ms Cornwall said she later posted a message on Facebook about the incident and was ‘absolutely gobsmacked’ when a number of people sent her private messages telling her that they had experienced the same.

She added: ‘I’ve always been the kind of mother that says they need to be careful and watch their drinks, so I have always been aware that it happens. 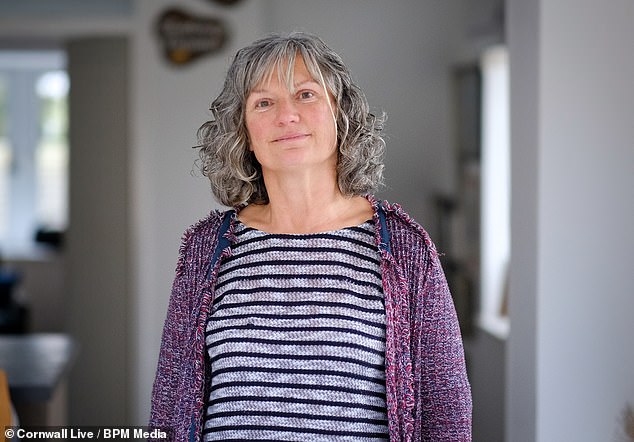 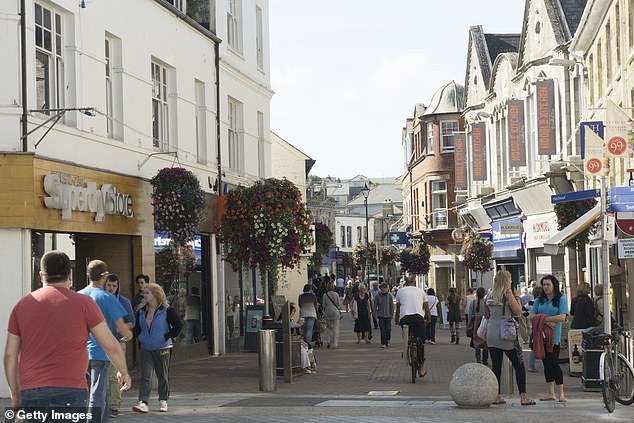 Ms Cornwall had been out with friends in the Cornish town of Newquay on November 5 when her drink was allegedly spiked. Pictured: GV of Newquay town centre

‘But what I wasn’t aware of what how commonplace it is and that the perpetrators are not discriminate about who they drug.

‘When I put up a post on Facebook about it around four to five weeks ago when it happened, I was absolutely gobsmacked by how many people private messaged me to say that it’s happened to them too and it’s happened to men and women.’

Ms Cornwall revealed she did not want to tell the bar about the incident or report it to the police because she felt ashamed about what happened.

She said: ‘I felt so dirty the next day and then I felt total self doubt, wondering if I had made it all up. It sounds very cliche but when you hear victims say that they felt dirty about what happened to them, I understand how they feel because you do feel that way.

‘I know so many people who it’s happened to and they haven’t gone to the police either. So, I am mindful that I am trying to tackle this problem that the police don’t have facts and figures for because people aren’t going to them.’

She continued: ‘I wouldn’t want to put pressure on anyone to report it to the police but I would encourage them to anonymously report it to places like the Woman’s Centre Cornwall.

‘I know it happens to men and women, so any anonymous reporting is important because the more figures they have, the more likely they will be able to do something.’

The mother-of-three has said more needs to be done to prevent drink drugging in clubs and bars, and is now looking at ways she can help combat the issue.

She added: ‘I think there needs to be more training and education for staff at clubs and bars and need to adopt a zero tolerance policy where staff encourage people to let them know if they see anyone drugging a drink.

‘It’s not enough to tell people to cover their drinks or get their drinks tested at the bar because there’s no way someone who’s been drugged is going to know.

‘You can’t taste it and you’re probably not going to feel an injection because your senses are over loaded in nightclubs. There’s just too much responsibility placed on victims.’

Police chiefs have also been tasked by the Commons Home Affairs Committee to urgently provide more information on their assessment of the scale of the problem after reports of incidents in several parts of the country, including Nottingham, Scotland and Northern Ireland.

Groups from more than 30 universities around the UK have joined an online campaign calling for the boycott of nightclubs, with campaigners seeking ‘tangible’ changes to make them safer, such as covers/stoppers for drinks, better training for staff and more rigorous searches of clubbers. 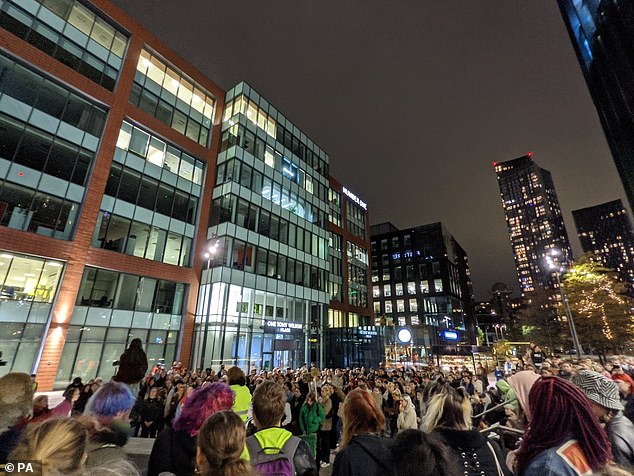 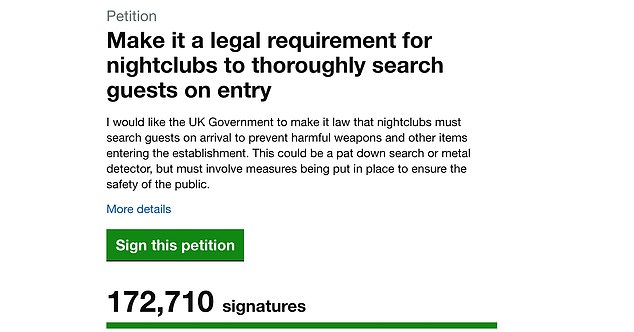 A petition launched last month to make it a legal requirement for nightclubs to thoroughly search guests on entry has already gained more than 170,000 signatures

One 19-year-old student in Nottingham said she had blacked out going clubbing, before waking up to find a pin-prick hole in the back of her leg. Police are involved and have arrested a man on suspicion of administering a poison or noxious substance.

Another student in Nottingham, also 19, said how she woke up in hospital with a throbbing pain in her hand after going clubbing. She too believes she was targeted with a needle to the back of her hand.

And West Midlands Police said they had received one report where the circumstances ‘appear to match the description of someone being spiked by injection’. However, the forces says it is ‘unclear exactly what has happened’ and they are continuing to investigate.

It came as Ilana El-baz, 20, recently recalled how she was ‘left semi-paralysed’ on a staircase after returning home from a Bristol nightclub.

This month police investigating the needle and drink spiking incidents in Sussex also said they had arrested a third man in connection with the attacks.

The 18-year-old from Brighton is one of three men who have now been arrested on suspicion of spiking by injection and in drinks during nights out.

Meanwhile, Britain’s biggest nightclub chain Rekom UK, which runs more than 40 venues across the country, announced plans to introduce drink covers and body searches in response to growing concerns over a spiking.

Durham’s Klute nightclub has also taken similar measures, writing on Facebook: ‘Customer safety is our number one priority, so we will now be supplying drink covers for anyone that requests one’.

The National Police Chiefs’ Council said there have been 198 reports of spiking in September and October across various parts of England, Scotland, Wales, and Northern Ireland, plus 24 reports of some form of injection.

The industry body for nightclubs has today called for an urgent inquiry into the wider issue of spiking.

They have urged the Home Office to look at Devon and Cornwall Police, who have recently launched a drink spiking testing pilot using on-site testing to allow people to get their drinks test.

Michael Kill, CEO of the Night Time Industries Association, said: ‘The NTIA are very concerned to learn about the reported increase in the number of spiking incidents taking place across the country.

‘We support all those coming forward to speak about their experiences. It goes without saying that everyone should be able to enjoy a night out without fearing for their own safety, and we are saddened to hear that some don’t feel this way.’

‘There is a lot that we as a sector are already doing to try to tackle drink spiking.

‘In response to recent reports, operators across the country have been working with the police, local authorities and key stakeholders, focusing on safeguarding customers, particularly women, at night.

‘It varies by region, but many cities already have well-established networks amongst operators and community support representatives, and work very closely with authorities, communicating on a regular basis to highlight increases in crime or disorder.

‘The truth is though, very real challenges still exist. We know this a societal problem, but it is very difficult to say with any real certainty what the scale of this problem is, because drink spiking is currently criminalised under an offence which encompasses many other types of incident, and it is also not possible to ascertain whether incident occurred within a licensed venue or some other setting.

‘The result is that police data revealed through FOI requests does not give an accurate picture of what’s happening, or lend itself to specifically categorising this particular crime.

‘We have been encouraged to see the progressive approach taken by Devon and Cornwall Police through their drink spiking testing pilot. The Home Office should launch a formal inquiry to examine the results of that pilot, and the lessons that can be applied to the industry and policing nationally.

‘The scheme found that through having on-site testing available in the night time economy, data could be collected that would provide a more accurate picture.

‘Having testing available and clearly communicating this to customers was also found to have de-escalated situations – where tested drinks came back negative – and generally provided reassurance to customers who had spiking concerns.

‘We believe the widespread implementation of these measures – to complement existing routine duty of care measures – is an important step in making sure everyone can enjoy a night out safely and without fear, as it should be. The Home Office should work with the industry as part of this inquiry, and also speak to campaign groups and listen to their concerns.’