A battle to slash mortgage rates below 1 per cent has today intensified, with HSBC UK now offering a deal at 0.89 per cent.

The bank said the two-year deal has its lowest ever fixed mortgage rate. It comes as rival bank Halifax also announced a two-year mortgage rate at 0.83 per cent.

But for those eyeing-up a cheaper mortgage rate, there is a sizeable catch. Buyers will need to stump up a massive 40 per cent deposit and a £999 fee to take out the mortgage.

And with average house prices in London around £475,000, buyers looking to get the new HSBC mortgage will need to have a deposit of more than £180,000.

Experts say the deals are a result of banks looking to get ‘low-risk’ customers on their books after taking on higher risk borrowers under the Government’s Mortgage Guarantee Scheme.

The scheme has seen some of the country’s largest lenders including Lloyds, NatWest, Santander, Barclays and HSBC offer 95 per cent mortgages – partly guaranteed by the Government. 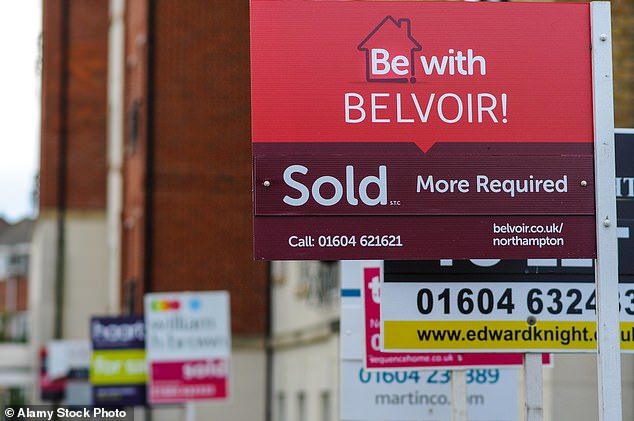 A battle to slash mortgage rates below 1 per cent has today intensified, with HSBC UK now offering a deal at 0.89 per cent. Pictured: Library image of a ‘Sold’ sign on a property

Meanwhile, finance expert Rachel Springall, from Moneyfacts.co.uk, said the cuts were an attempt by banks to ‘grab the attention of borrowers’ in the wake of Covid.

She said: ‘Several big brands now offer sub-1 per cent mortgages and if borrowers are comparing these deals it would be wise to approach a broker to assess the overall true cost.

‘Interestingly, the latest cuts by HSBC mean they are the second lender to offer sub-1% five-year fixed mortgages, following Nationwide Building Society who were the first ever to do so on our records.

‘Lenders are making notable rate cuts to their mortgage ranges to grab the attention of borrowers and bring in new business after the market endured an unsettled period due to the pandemic.’

However Lewis Shaw, founder of Shaw Financial Services said the tumbling rates were a result of the Government’s Mortgage Guarantee Scheme.

Along with its new 0.89 per cent mortgage HSBC UK also offering a five-year deal below 1 per cent, with a fixed rate of 0.99 per cent, also for borrowers with a 40 per cent deposit and a £999 fee.

The bank added that it has made improvements to its application process, with people able to access a ‘rapid’ decision in principle tool online or on their mobile. 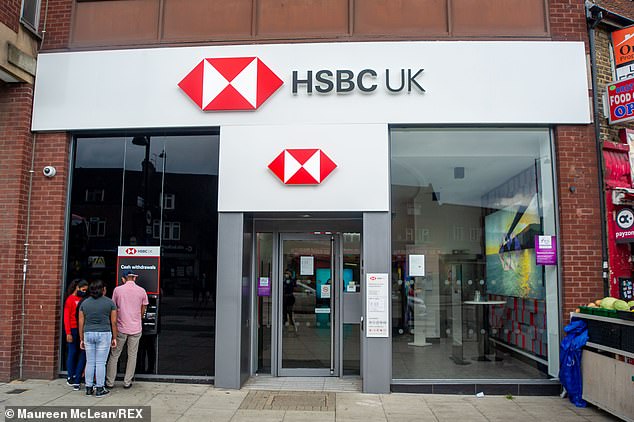 HSBC said the two-year deal has its lowest ever fixed mortgage rate. It as rival bank Halifax also announced a two-year mortgage rate at 0.83 per cent

The tool can potentially provide a decision in as little as 10 minutes, HSBC said.

Ms Springall said some low rate deals may only be suitable for people who can meet certain eligibility criteria, such as having a big deposit. Borrowers also need to bear the fees in mind.

She said: ‘Borrowers may be better off elsewhere on a deal with a slightly higher rate but with a more reasonable fee and incentive package. It really does depend on their circumstances and what they are looking to borrow, so seeking advice is wise.’

At the other end of the mortgage market, the choice of low deposit deals has only recently started to grow generally after many ‘riskier’ deals vanished in 2020.

HSBC UK did announce some rate cuts on new deals for people with 25 per cent deposits on Tuesday, including a five-year fixed deal at 1.19 per cent, with a £999 fee.

Ms Springall continued: ‘Most of the low rate deals are for borrowers with a decent amount of equity in their home, so there is more room for lenders to cut rates in the higher loan-to-value sectors.

‘However, we have only recently seen product choice grow in this area of the market, after a significant drop due to the pandemic, so it may be a few weeks yet before lenders consider slashing their rates on higher loan-to-value mortgages and instead they may well just maintain their presence in the market or make minor tweaks.’