The health department expects more coronavirus cases to be detected in a growing outbreak in Melbourne’s northern suburbs that has resulted in more than 500 people being told to self-isolate.

All of the state's five extra cases recorded on Thursday were connected to the cluster, identified just days before Premier Daniel Andrews was due to announce a further easing of the city's lockdown restrictions. 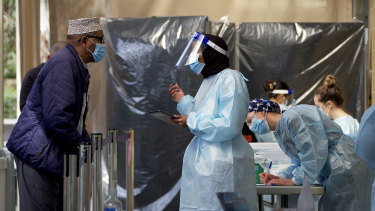 Testing has been ramped up in Melbourne’s northern suburbs. Credit:Luis Enrique Ascui

The cluster includes 16 active cases across six households, one of whom was a primary school student who attended school for two days while infected with COVID-19 this week.

The Department of Health and Human services said in an update on Thursday that it was expecting more cases to emerge from 10 testing sites and contact tracing across several northern suburbs.

The new cases came as it was revealed that the boy attended East Preston Islamic College on Monday and Tuesday despite members of his family remaining in quarantine at home with active COVID-19 infections, and that the virus had spread as members of the extended family moved between households.

Seventy-three of the student’s close contacts, 400 of their contacts and 120 public housing residents were in self-isolation on Thursday.

Mr Andrews remained confident that he would be able to ease coronavirus restrictions on Sunday, with an expected announcement of a reopening of hospitality and retail.

Associate Professor Hassan Vally, an epidemiologist based at La Trobe University, warned, however, that the outbreak would test multiple aspects of Victoria’s public health response.

“We shouldn’t panic, but this has all the elements of the kind of thing that can pose a problem,” he said

“These are all situations that pose a threat in terms of the transmission of the virus. It is certainly a situation which we have to respond to aggressively.”

Some members of the multi-generational Somali family, whom one source familiar with the cases said were moving between several households in recent weeks, were permitted to leave home as they had recovered, but the boy who attended school had yet to complete his day-11 test, which came back positive on Wednesday.

A Somali community group based in Heidelberg West was on Thursday working with local health authorities to door-knock residents of Broadmeadows, Preston, Dallas, Roxburgh Park and West Heidelberg to urge anyone with coronavirus symptoms to get tested.

Ekrem Ozyurek, principal of East Preston Islamic School, said the grade five boy's parents had been “very up-front and honest” with the school about the fact that others in the family had previously had the virus.

“On Monday … his mother brought the clearance letters from the department for the other two siblings, because they were positive and they were given a clearance letter on the 17th of October,” Mr Ozyurek said. 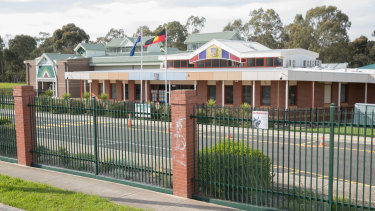 East Preston Islamic College has been closed for cleaning.Credit:Simon Schluter

He said the boy had previously tested negative to the virus, but on Tuesday while he was at school his father was contacted by DHHS for the boy’s 11th-day test.

The department also contacted the school for the first time on Tuesday afternoon to inquire if the boy was at school, saying he should be at home, Mr Ozyurek said.

“When they rang me and said, look he’s not supposed to be at school … I rang and spoke to the father who said the department rang him as well to say they are coming at 4 o’clock to test him,” he said.

Mr Ozyurek shut the school as a precaution, and was told by DHHS on Wednesday that the boy had tested positive to COVID-19.

Students at the Islamic college are likely to resume remote learning until November 4. Dallas Brooks Community Primary School also closed on Thursday as a precaution on the advice of DHHS, due to a close contact being identified at the school.

Some close contacts of the boy have taken up the department’s offer of alternative accommodation while they self-isolate. Only staff who had taught the boy this week were self-isolating, Mr Ozyurek said.

Pressed on the health department's communications with the family, Mr Andrews said it had gone to "extraordinary lengths", as deputy chief health officer Allen Cheng admitted each family member had been assigned a different health department worker who regularly checked in and advised them on when they should be testing. 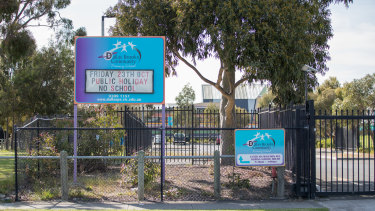 Dallas Brookes Community Primary School was also closed after a link was found with a case at East Preston Islamic College.Credit:Simon Schluter

Mr Byrne’s data compares Hume’s performance to other council areas with similar levels of socio-economic disadvantage. Even then, Hume was an outlier.

“Hume is a particular travel hotspot – it has been since September,” he said.

The owner of Broadmeadows coffee shop Lakeside Espresso said he was worried the area would end up staying in lockdown due to the outbreak.

He said he received a text message from the Health Department on Wednesday informing him of nearby exposure sites.

"I just worry about the government easing restrictions for others but maybe holding us for a little bit longer. It’s probably not likely because it's hard to lock down a few suburbs … [but] the situation is not good.”