THIS is the shocking moment a drunk Scotland fan was knocked down by a motorbike in London – after stumbling straight into oncoming traffic.

The Tartan Army supporter was filmed crashing into the vehicle as thousands of supporters descended on London ahead of tomorrow's Euros clash against England at Wembley. 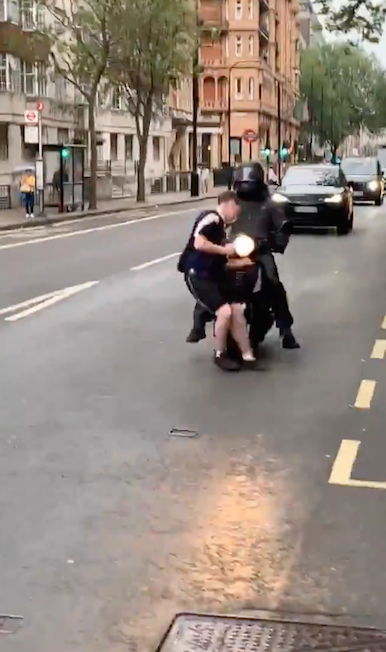 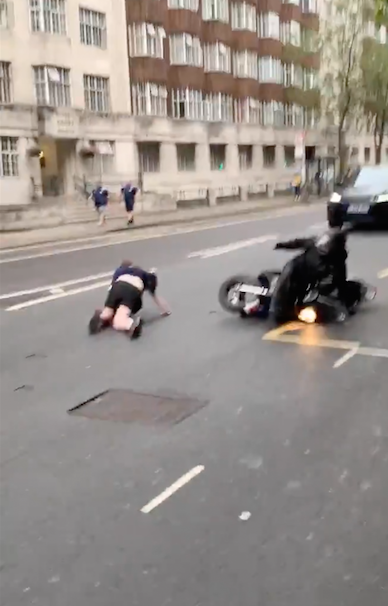 Moments before the collision, he could be seen struggling to walk while crossing the road.

He then staggers straight into the black motorcycle, knocking the biker and his vehicle to the ground.

Cars come to a standstill while the driver appears to yell at the footie fan, who manages to stumble to his feet and run off.

But it's understood the lad didn't suffer any injuries, as a pal later shared a picture of him smiling in his hotel room. 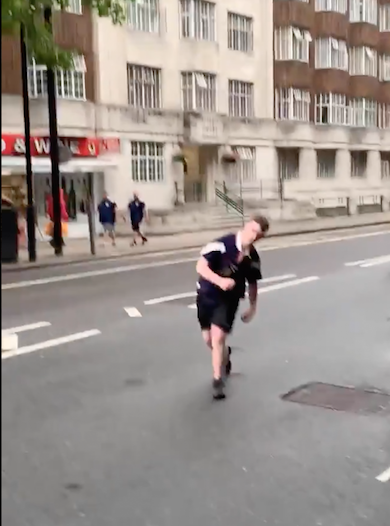 It comes as Scotland fans filled Leicester Square fountain with bubbles before having a dip and soaking cops with booze.

The party has started for thousands of Tartan Army diehards who made the trip to London ahead of tomorrow's Euros clash with England at Wembley.

Supporters in Scotland tops with flags were in high spirits as they chanted "no Scotland, no party".

Footie fanatics could be seen cheering and jumping while chanting as excitement builds ahead of the massive Euros fixture.

It's estimated up to 20,000 Scotland fans have made the trip to London despite pleas from mayor Sadiq Khan to stay home.

Just under 3,000 Tartan Army supporters will be able to attend the game, with limits still in place due to Covid.

We told earlier how Scotland crowds were heard chanting John McGinn's name after arriving in London.

Fans were also filmed singing Yes Sir, I Can Boogie as they travelled to the UK capital city by train.

Elsewhere, supporters let off flares at an unofficial fanzone in Hyde Park as they soaked up the electric atmosphere.