Around 50 million Chinese-made FFP2 masks supplied by Ayanda Capital had ear straps rather than head straps, which raised ‘concern’ they may not provide an ‘adequate fixing’ around the face.

The private equity company was handed a £252million contract overall to provide personal equipment (PPE) brokered by Andrew Mills, an adviser to Trade Secretary  Liz Truss and the Board of Trade – and a senior board adviser at Ayanda.

Ayanda Capital also supplied 150 million masks of another type, which the Government says are unaffected but will be subject to further testing in the UK before any are released for use in the NHS.

Papers supporting a judicial review of the contract against Health Secretary Matt Hancock, brought by the Good Law Project (GLP), notes: ‘It is common ground that Ayanda had no prior experience of supplying PPE or indeed and goods or health-related services’.

They went on to allege Mr Mill ‘requested’ the firm got the contract instead of his own company, Prospermill Ltd, which was set up in February last year with assets of just £100 and had no facilities to handle foreign payments.

‘Against that background, the value of the contract awarded to Ayanda without competition – £252million – is staggering’, the GLP document written by QC Jason Coppel noted.

‘A substantial portion of the masks purchased under the contract – the FFP2 masks – have been determined by the defendant (Mr Hancock) to be not fit for purpose and will not be used in the NHS.’ 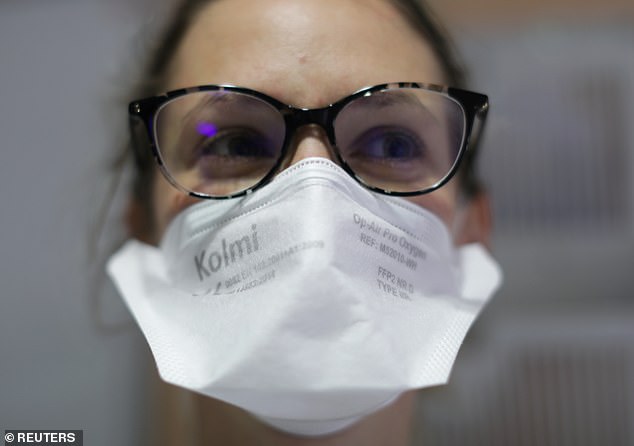 Around 43 million Chinese-made FFP2 masks supplied by Ayanda Capital were found to have ear straps rather than head straps, which raised ‘concern’ they may not provide an ‘adequate fixing’ for doctors and nurses in high risk wards 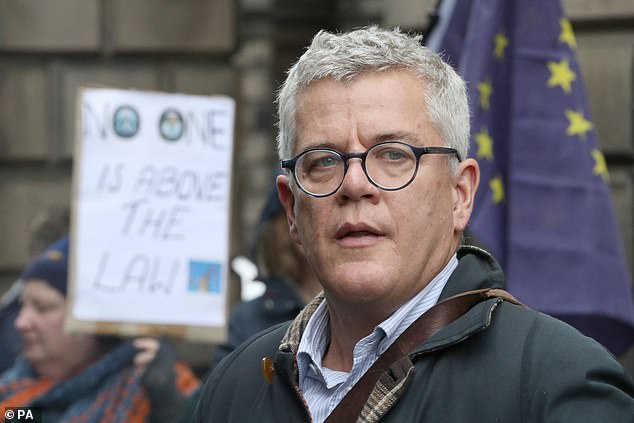 Documents supporting a judicial review of the contract, brought by the Good Law Project, run by Jolyon Maugham (above) notes: ‘It is common ground that Ayanda had no prior experience of supplying PPE or indeed and goods or health-related services’.

Rachel Reeves MP, shadow chancellor of the Duchy of Lancaster, said: ‘The Conservative Government failed in their duty to fully protect those working on the frontline during those crucial early months of this pandemic.

‘It is astounding that ministers allowed the national PPE stockpile to run down and then spent millions with an offshore finance company with no history of providing vital equipment for the NHS.

‘Many health and care workers experienced inadequate protection, relied on community donations and even bought their own PPE from DIY shops.

‘Ministers repeatedly assured the country that things were fine, yet lives of health workers were lost, the infection was spread in health settings while all that time masks bought by the Government could not be used for their intended purpose.

‘The case for the National Audit Office to investigate the Conservative Government’s mishandling of PPE is overwhelming and as well as apologise, ministers must urgently learn lessons to save lives in the future.’

Ayala is owned by the Horlick family via ‘an entity in Mauritius’, the documents claim.

Its website says: ‘We are a London-based family office focused on a broad investment strategy. We specialise in currency trading, offshore property, private equity and trade financing.’

Its chief executive Tim Horlick told the Times that the Government ministers asked to change the order at a ‘late stage in our contract … to headbands from early loop design [and] we are working with [the Department of Health and Social Care] to try to assist them with this matter’.

The Government disclosed in court papers that the original approach to sell the masks came from Mr Mills.  Prospermill had secured exclusive rights to the full production capacity of a large factory in China to produce masks and offered a large quantity almost immediately.

But the legal document revealed Mr Mills requested DHSC’s contractual counterparty should be Ayanda rather than Prospermill, as Ayanda already had an established international banking infrastructure that could be used to effect the necessary payments overseas, whereas Prospermill’s own bank had indicated it could take some time to set this up on its own account.

Jolyon Maugham, director of the Good Law Project, said: ‘Good Law Project wrote to Government on three contracts each worth over a hundred million pounds – with respectively a pest control company, a confectioner and a family hedge fund.

‘Each of those contracts has revealed real cause for alarm – including, on Ayanda, that around £150 million was spent on unusable masks. What other failures remain undiscovered?’

The Department of Health’s own submission to the judicial review admits that there was a problem with the FFP2 masks from Ayanda and other companies it contracted for supplies.

‘Some of the masks DHSC had puchased (including the Ayanda FFP2 masks) have ear-loop fastenings rather than head loops, and there was a concern as to whether the former still provided an adequate fixing, notwithstanding that head loops are not a requirement of the relevant FFP2 technical standard … and are accepted by other countries.

‘To that end, further production of  of all ear-looped FFP2 masks has been paused, and these will no longer be recommended for purchase or included in the essential specifications. 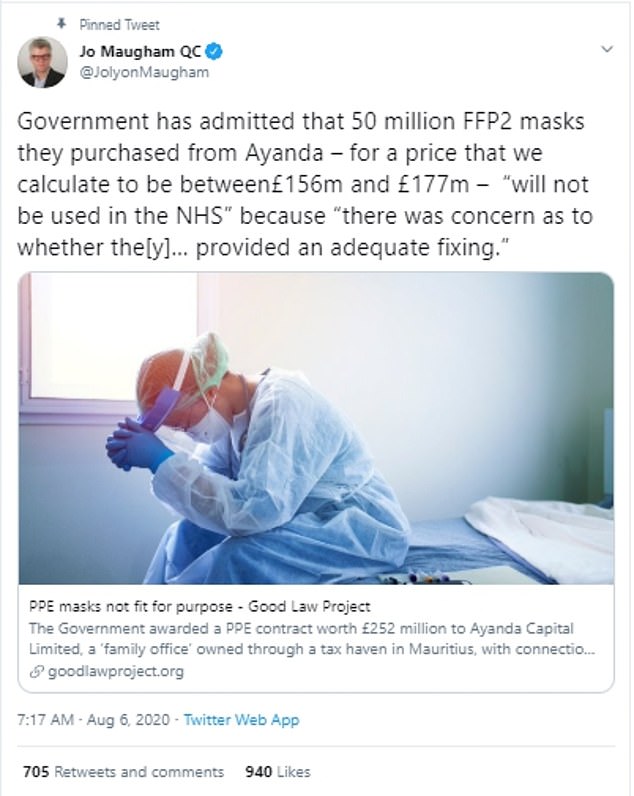 ‘No final decision has yet been taken about the ear-looped FFP2 masks that have been supplied so far, but we can confirm they will not be used int he NHS.’

Liberal Democrat health spokeswoman Munira Wilson said: ‘The news that 50million masks are not safe for our NHS and care staff to use is yet another staggering error made by this Government.

‘Not only does it mean millions of pounds of taxpayers money being thrown down the drain, but it shows just how Ministers are playing fast and loose when it comes to keeping our NHS staff safe.

‘The Government’s procurement of personal protective equipment has been shocking from the very beginning of the pandemic. It should not need to be said that Ministers should prioritise protecting the staff in our health service from the virus over awarding Government contracts to their friends.

‘It is clear that Boris Johnson’s Government are still failing to get a grip on the coronavirus crisis. An inquiry into their handling of the pandemic must begin now, so that they can learn from their mistakes before more lives are put at risk.’

A Government spokesman said: ‘Throughout this global pandemic, we have been working tirelessly to deliver PPE to protect people on the front line.

‘Over 2.4 billion items have been delivered and more than 30 billion have been ordered from UK-based manufacturers and international partners to provide a continuous supply, which meets the needs of health and social care staff both now and in the future.

‘There is a robust process in place to ensure orders are of high quality and meet strict safety standards, with the necessary due diligence undertaken on all Government contracts.’