According to forecasters’ predictions, this Bank Holiday Monday could be the coldest on record for some areas of the country. Showers on Thursday brought significant road disruptions in areas such as Kingston, south-west London, and London Road in Glasgow.

A yellow warning for heavy rain for north-east England is expected to last until 10am on Friday.

Thunderstorms are expected in regions of southern England and South Wales between 11am and 8pm.

Meteorologist Emma Salter said: “There will be quite heavy, isolated downpours and there is potential for flash flooding. 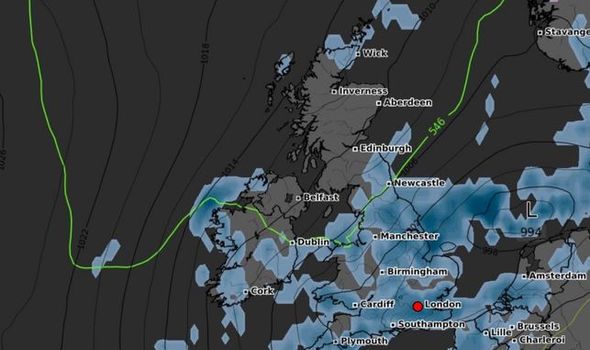 Speaking of the upcoming weekend, Ms Salter said: “We’ll see an improving picture throughout the weekend but it will be quite chilly, as far as August is concerned, particularly in the north.

“Sunday will be dry with a good spell of sunshine.”

This Bank Holiday, Ms Salter said the mercury could reach 19C in London. 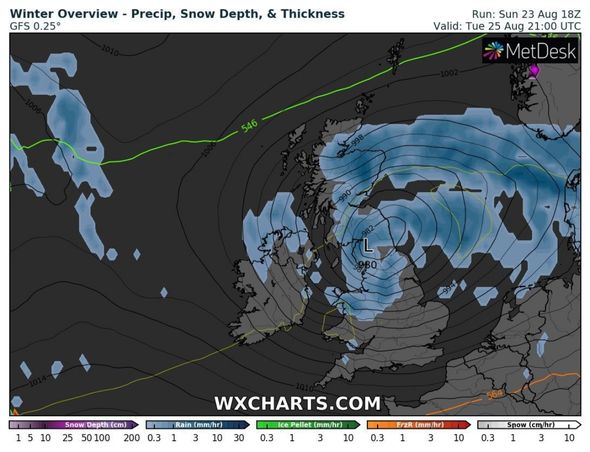 Some parts of Scotland will reach highs of 11C, well below the average of 16C usually seen in the country.

She added that last year’s late August Bank Holiday Monday was the hottest on record, with 33.2C recorded at Heathrow.

Ms Salter said: ”We could see some places getting the coldest maximum temperatures on record this Bank Holiday Monday.

“The lowest maximum temperature recorded was 10.1C in the Shetland Islands – if anywhere gets lower than that it’s in the running to be the coldest on record.” 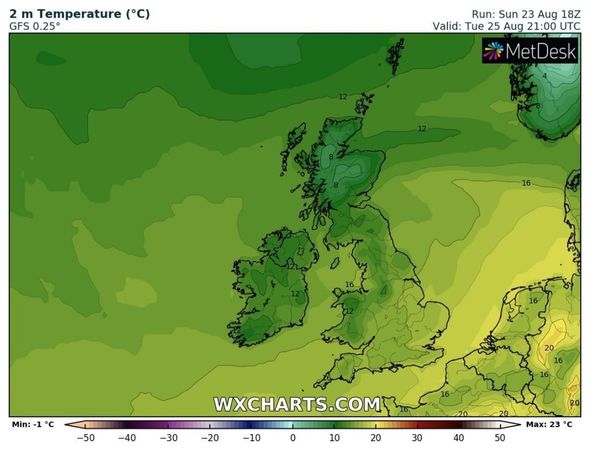 Commenting on the torrential rains to come for areas of southern England, the Met Office said: “Areas of heavy rain will continue to move eastwards across southern parts of England, bringing up to 1.1 or 1.5 inches (30 or 40mm) in five or six hours in a few areas – enough to cause a lot of surface water and some flooding on roads.

“Conditions drying up across the west of the warning area later.”

Thunderstorm warnings have been issued for areas of the UK for Friday, too.

The Met Office writes: “Heavy showers and thunderstorms are expected to develop quite quickly later on Friday morning, but peaking during the afternoon for many, before probably becoming more restricted to the southeast and south coastal counties towards evening. 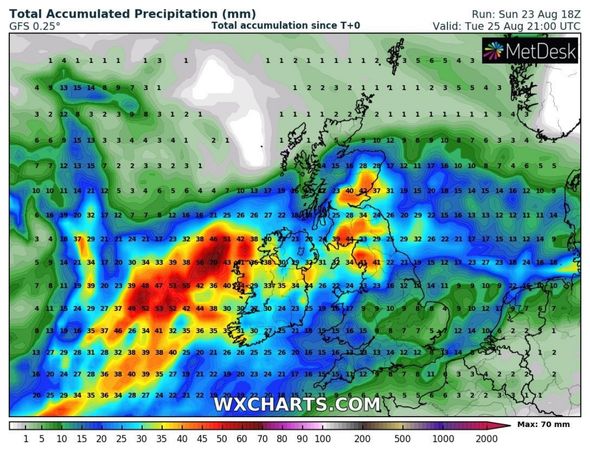 “Some places will miss the heavier rain, but other locations could see around 20mm within an hour and perhaps 30 to 40 mm in around 3 hours, sufficient to cause issues on the roads.”

The East Midlands, East of England, London and South East England, South West England, Wales and the West Midlands are the areas affected by the warnings.

Met Office forecaster Bonnie Diamond said: “The latter part of August has been dominated by Storm Ellen and Storm Francis, both of which had wind warnings which is unusual for August, but then if you rewind to the beginning of the month, we had no wind at all.

“We had high temperatures, light winds and exceptional heat which lasted for about a week.

“It has been an interesting month, starting out with a hot summer and seeing its way out with more autumnal weather.”