Chesney Cross, and her husband, Ken, began hunting for a new home in the Knoxville, Tennessee-area just as the pandemic began upending the housing market.

After a year of searching, the couple were unable to find anything that fit their $250,000 budget.

“Everything was selling super quickly and above what we wanted to spend,” says Chesney, 33. “We couldn't find anything that wasn't a giant fixer-upper.”

The couple had been living in a 1,100-square-foot home for a decade. But when their first child, Cash, arrived in November 2019, it began to feel cramped.

As frustrating as the house-hunting process had become, Cross would still spend hours scouring Instagram for her dream home: #Farmhousestyle.

That’s when she came across a picture of a house with the rustic, farmhouse-chic aesthetic she pined for.

►Spending more, getting less: How the pandemic, inflation take a financial toll on families

►Sign up for financial tips: Our Daily Money newsletter offers tips and advice delivered right to your inbox. 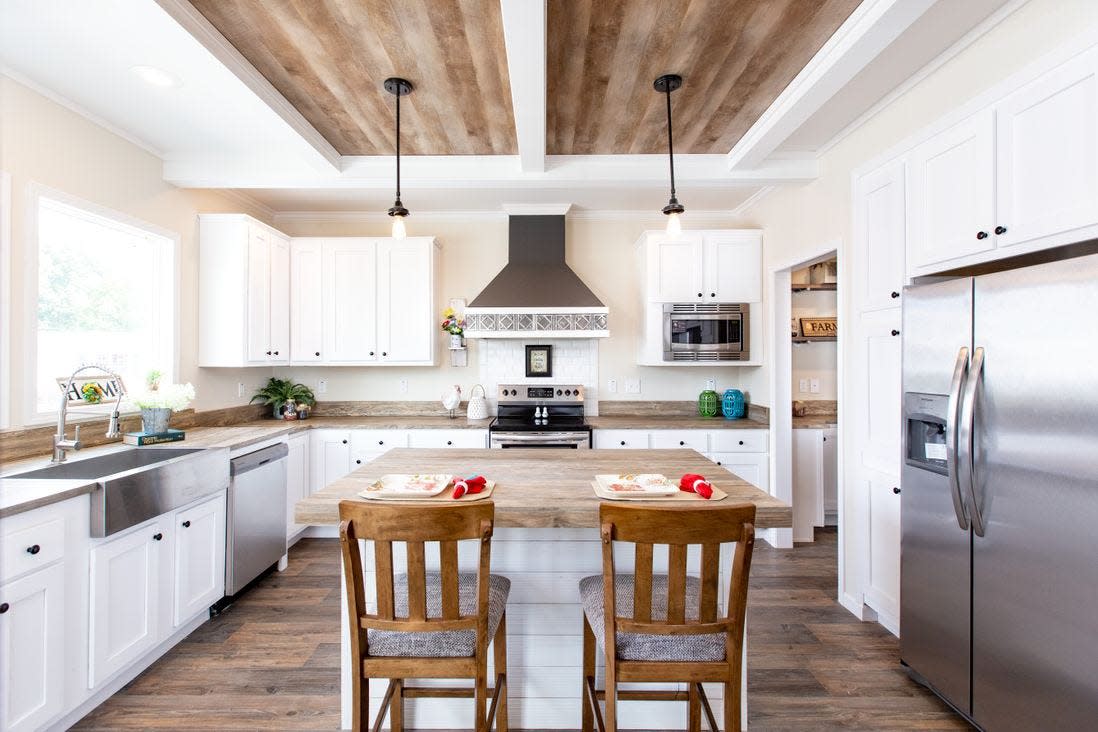 The price was right, but it turned out to be a manufactured home, an offspring of the mobile home.

"I mentioned it to my husband, and of course, he had that mindset of like, 'It's a trailer, you know,'” she says, alluding to a common perception of the old, cheaply built mobile homes. “I was like, 'No, you have to see these photos. It looks beautiful.'”

No matter, the family moved in last year, three months after signing a contract. 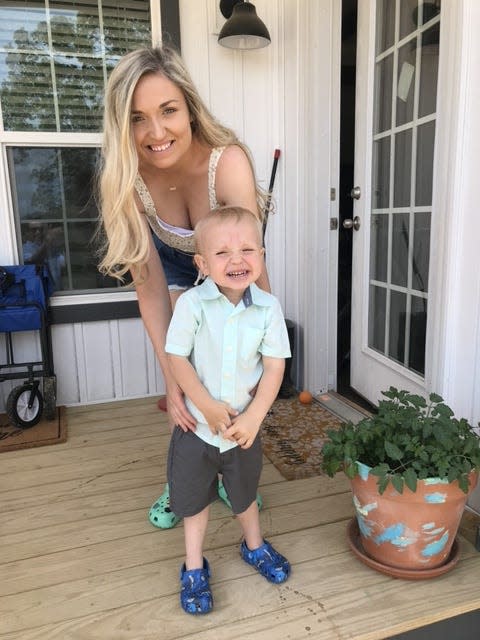 Priced out of the housing market

As an overheated housing market – marked by double-digit price increases, bidding wars and inventory shortages – puts the dream of homeownership out of reach of many ordinary Americans, manufactured homes are growing in popularity because their cost is roughly half that of homes built on a permanent site.

Unlike a traditional site-built house, which is constructed at its final location using multiple teams of subcontractors, a manufactured home is built in an indoor facility and delivered to its location. That lowers costs by improving the efficiency in the home-building process: All the teams needed to build the manufactured home are in the facility, dramatically reducing labor costs.

More than 43,000 land-lease/mobile park communities exist in the U.S., with an estimated 4.3 million home sites, according to the Manufactured Housing Institute, a national trade organization. And nearly 22 million people live in manufactured homes.

Or Michaelo, founder of Orbit Homes, which makes manufactured homes in California, says the simplicity of completing a house in the factory is what drew him to the business.

►Your guide to navigating inflation: Calculate, invest and profit amid rising prices

►Will home prices cool off? Will there be a housing market correction in 2022 after two years of 'hyper-growth'? 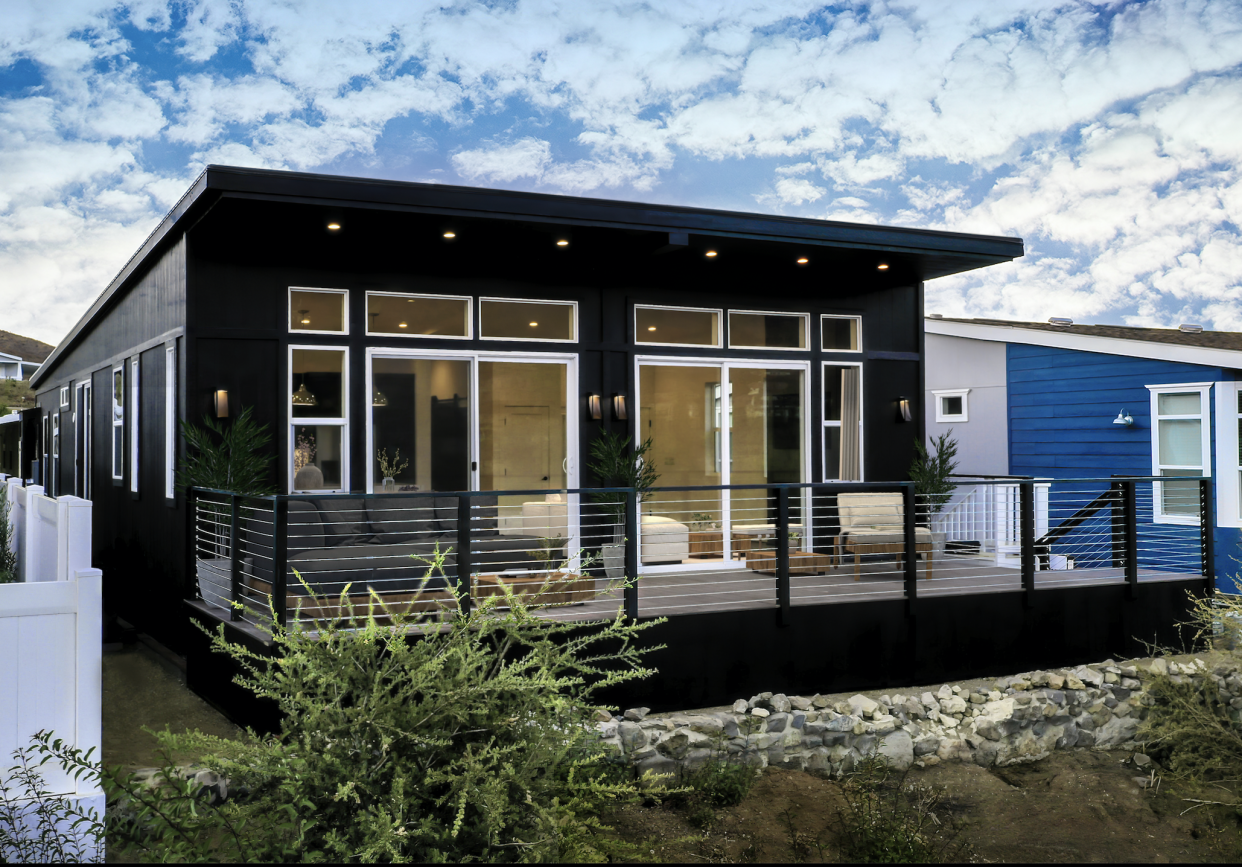 "It's cutting the time of construction, the hassle of dealing with all the trades – and the cost is tremendously lower," he says.

The price per square foot for a manufactured home in 2021 was about $57, compared with $119 for a home built in a neighborhood (excluding land), according to the MHI.

For the first time in 15 years, manufactured homes are on track to deliver more than 100,000 units this year, a 23% increase over 2016, according to the organization. 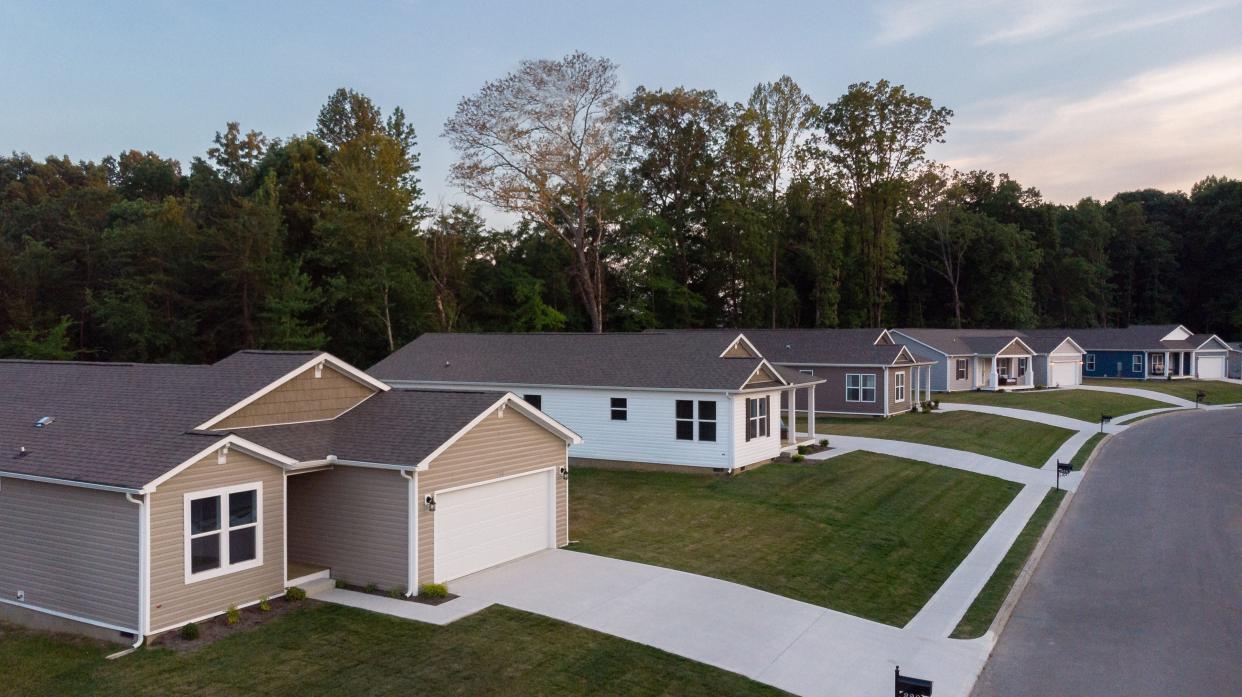 The quality and durability of manufactured homes have improved in recent decades to conform to federal and state construction requirements. This has made manufactured homes an affordable and attractive form of housing for many, on either individual lots or in parks, say industry experts.

“There's a lot of demand for our homes right now," says MHI CEO Lesli Gooch. "And that's because people are looking for that extra space. They're looking to own their own four walls, have outdoor space, enough space for a home office. Today’s manufactured homes are built to a federal building code, are structurally secure and resilient, energy-efficient and include a range of modern features that today’s consumers want."

►Will the workers come back? Many people have permanently stopped working, depressing labor force participation 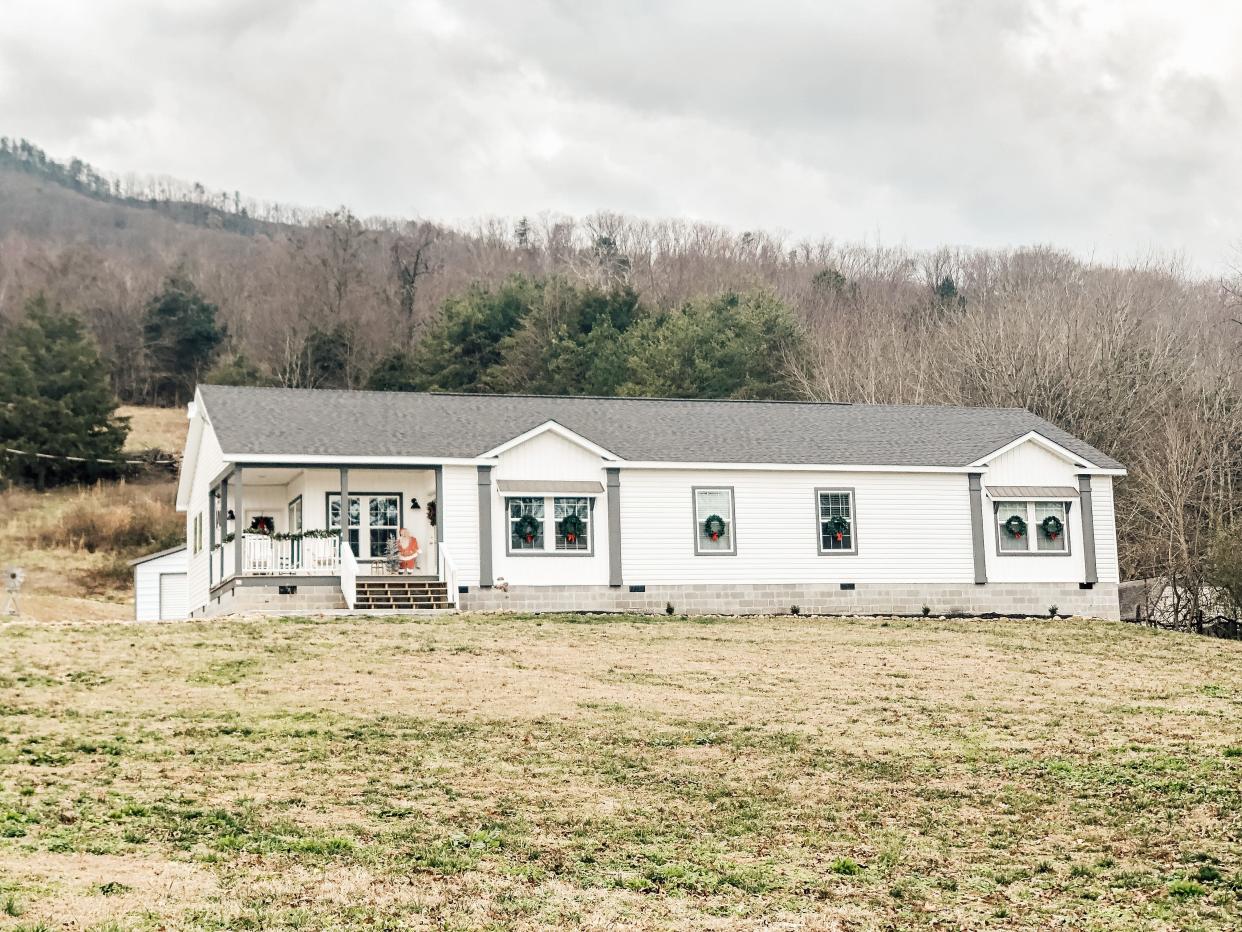 That value increased by nearly 40% on average from 2014 to 2019 (the latest census data available), while the median value of single-family homes over that same period increased by 33%, the report says. 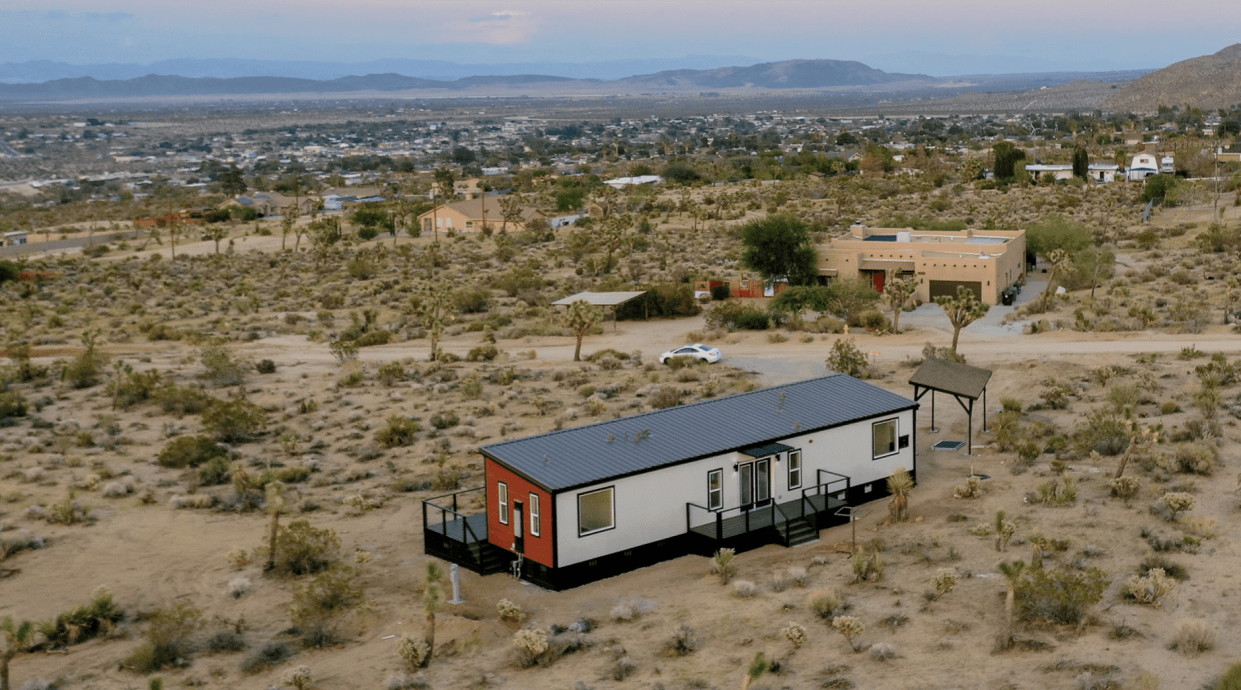 That is not surprising, says Glen Esterson, a broker for mobile park communities and a former mobile park owner, who has seen skyrocketing interest from investors further accelerate during the pandemic.

Solving the affordable housing crisis requires many pieces, including increasing housing supply through new home construction, addressing zoning regulations that constrain the provision of higher-density and affordable housing. But manufactured housing is an important component, says Gay Cororaton, senior economist and director of housing and commercial research for the National Association of Realtors.

Those drawbacks – along with trailer park or land access fees – may discourage some buyers.

Manufactured homes are the most expensive in Washington, Oregon, and California, mirroring traditional housing market conditions in those states. Washington is the only state where the median value of a mobile home is higher than $100,000. Oregon and California trail, with median values at $93,500 and $91,400, respectively.

Meanwhile, mobile homes are the least expensive in Nebraska, Iowa, and Ohio. All three states have a median value of less than $25,000.

Jacob Channel, an economist with LendingTree, says his company's report shows that mobile homes can be a good investment.

“People are afraid to buy mobile homes for a variety of reasons. And one of them is that they're afraid that they won't see any return on investment," he says, adding that he believes the report dispels that idea. “If you're thinking about buying a mobile home, as long as you buy it in a decent location, in a decent trailer park, for example, and you buy a home that's in a good quality condition, then you can expect to see a return on your investment.” 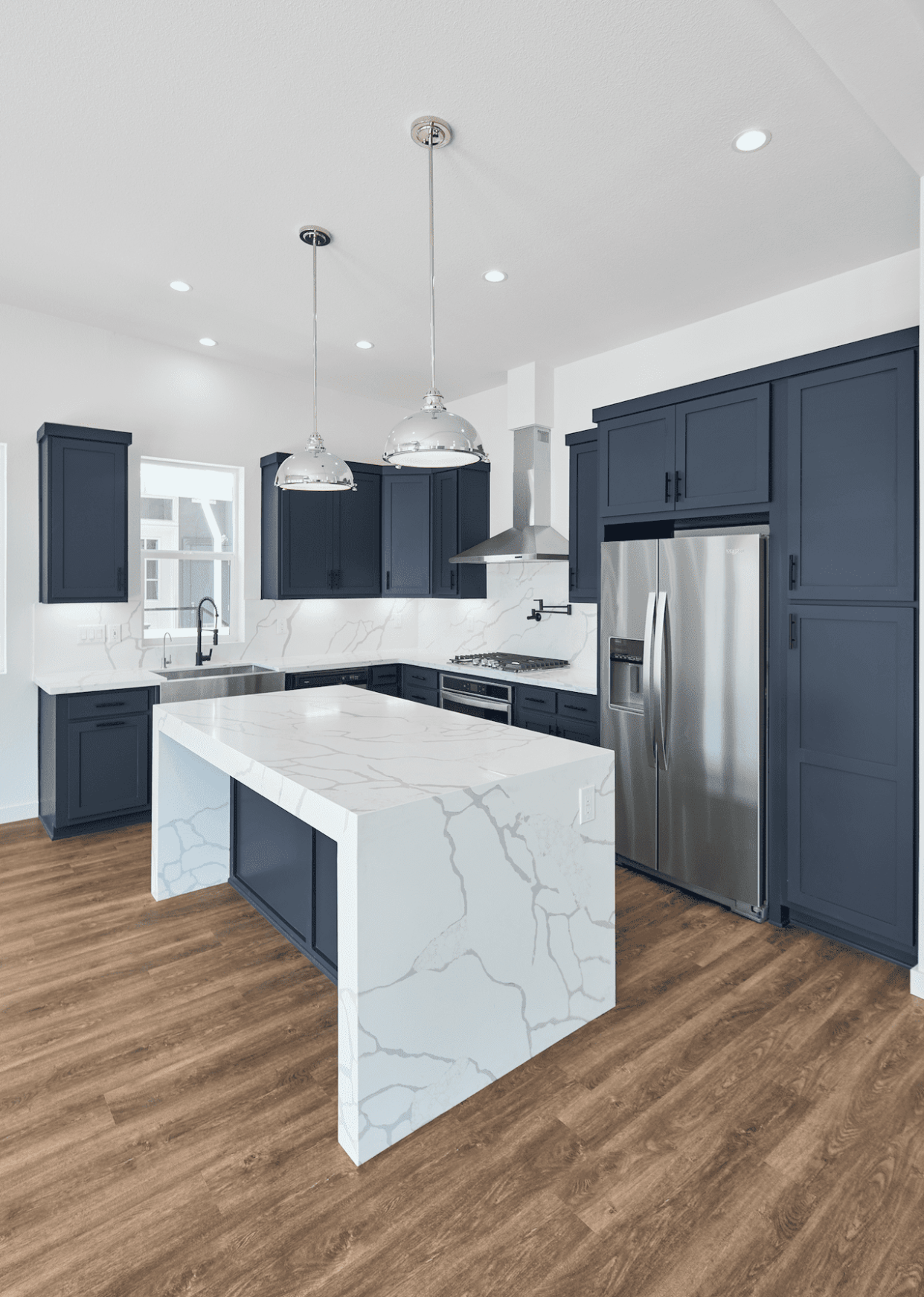 That was the case with Mark Robinson, 48, who was born and raised in the Paradise Cove mobile park community in Malibu, California.

In 2001, he bought his first mobile home for $65,000 in the Seminole Springs Mobile Home Park in Agoura Hills, just outside Malibu. After joining the Los Angeles County Fire Department as a firefighter, Robinson says he quickly paid off the home. He had a $356 association fee that covered water, sewer, and trash. 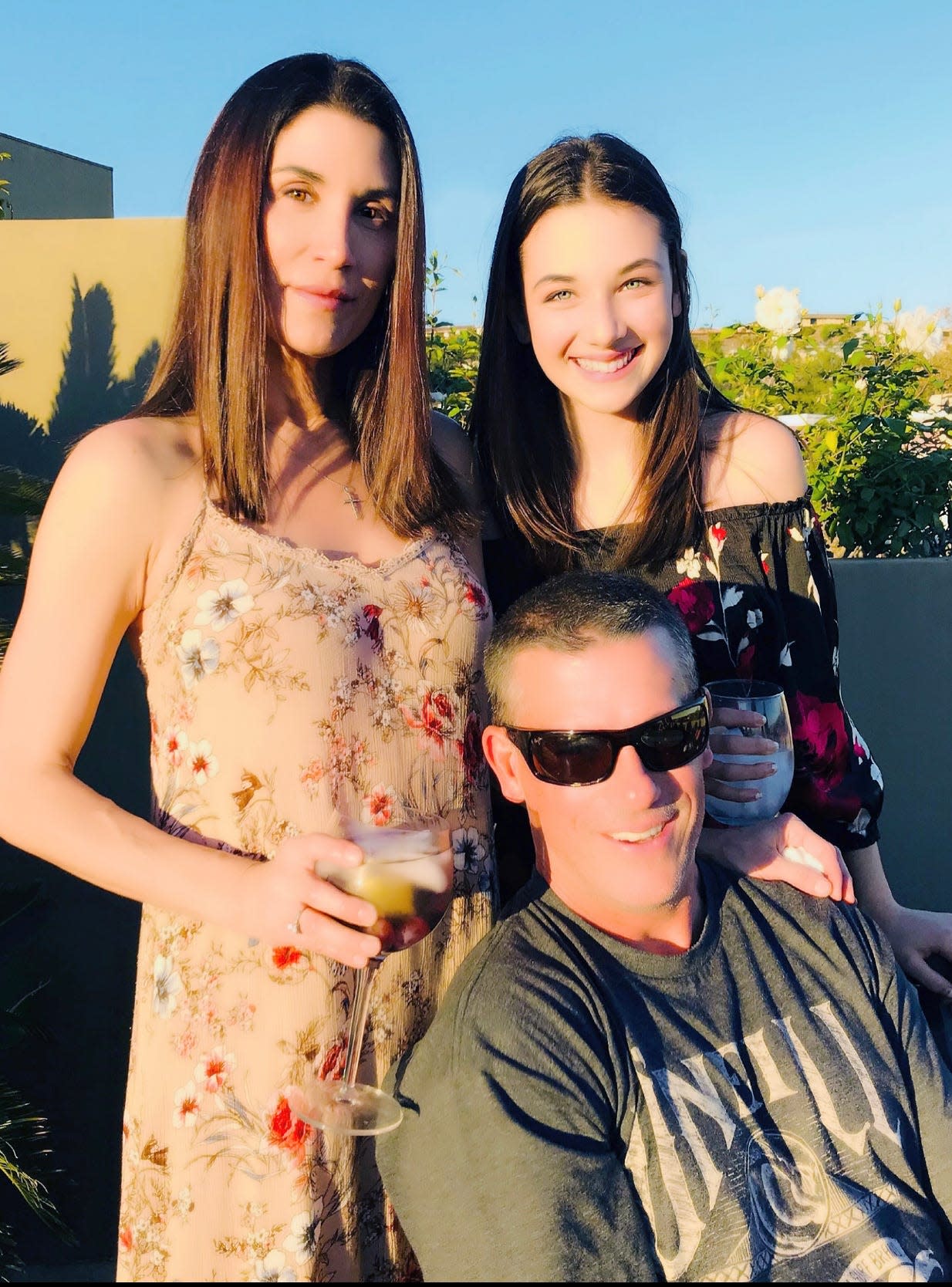 “I loved the trailer park stigma I got from my co-workers as I watched them struggle to make payments on their stick-built, overpriced homes,” he says, referring to their traditional homes that were built on-site.

A few years in, Robinson says he missed the beach life and decided to move back into a mobile home on the beach.

"We were only 15 minutes away, but there's a difference about being able to wake up and, you know, have a cup of coffee and sit on your deck and be checking the surf at Zuma Beach," he says.

►'Questionable' tax refunds: Firm helps companies get rich with refunds while its tactics that exhaust officials 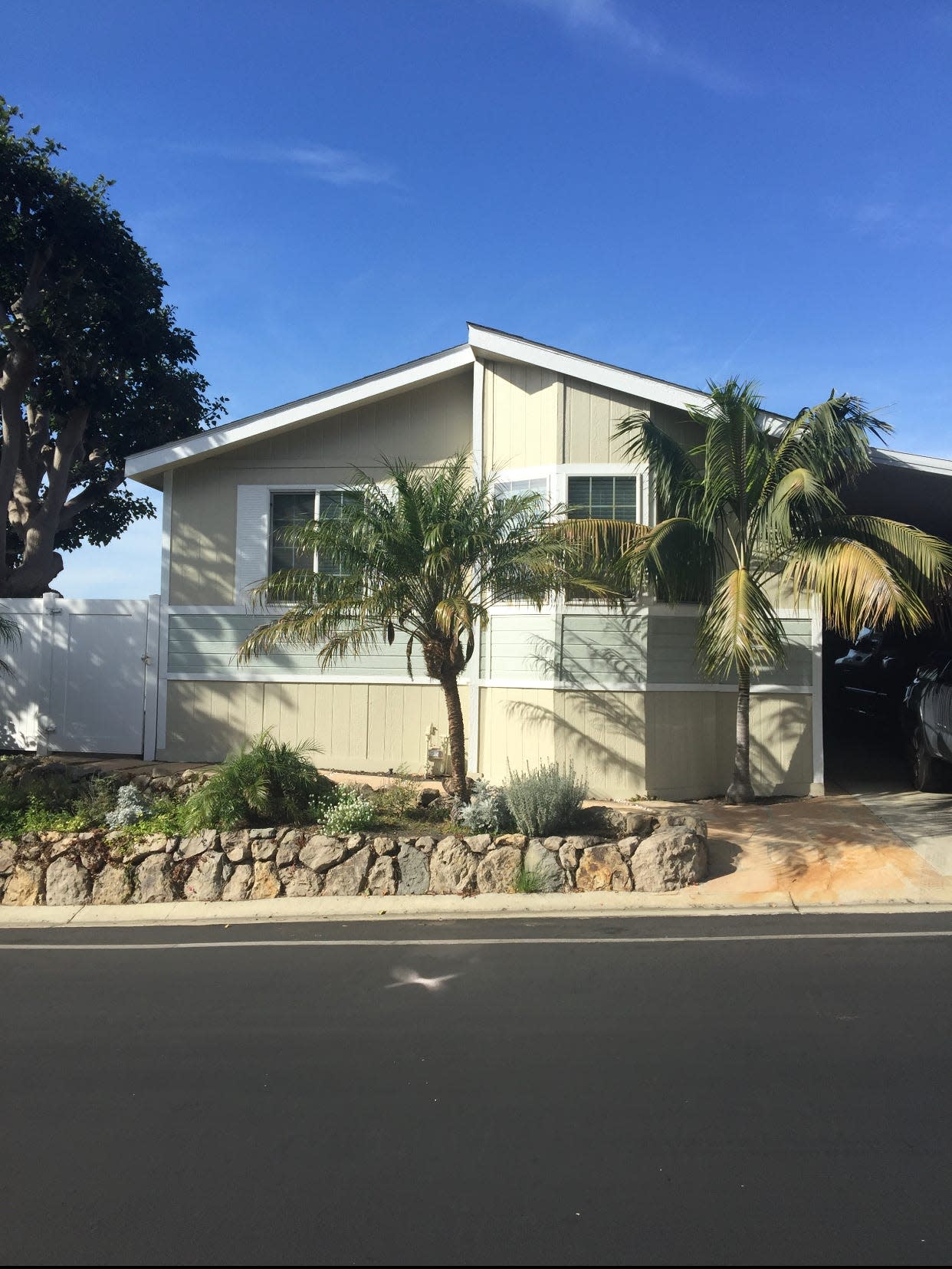 He is in the process of upgrading to a new manufactured home, which is estimated to cost around $500,000.

From Robinson's perspective, it's also a great investment, with a solar-paneled roof and a fully-wired house.

"Our forever trailer park home should appraise over $2 million once we put our new home,' Robinson says.

After Chesney Cross picked out the "Southern Charm" model from Clayton Homes, the largest builder of manufactured homes in the U.S., she added some upgrades, including a pitched roof. 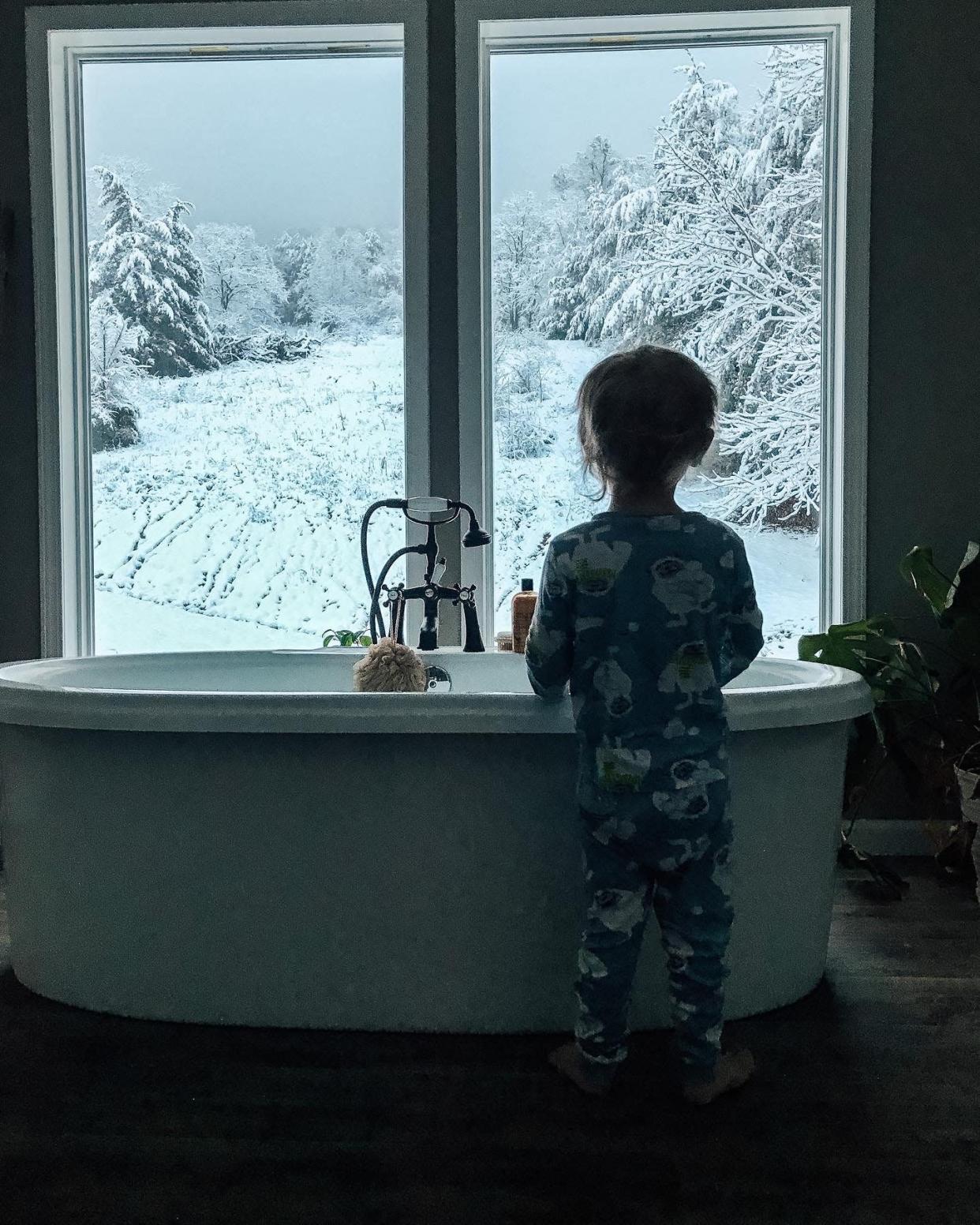 The total cost reached about $180,000. A 2-acre parcel in the area they were considering would have cost them $70,000, bringing their total to $250,000, well within the range of their initial budget. The couple instead decided to locate the home on their family property in Sevierville, Tennessee, to save on the price of the land 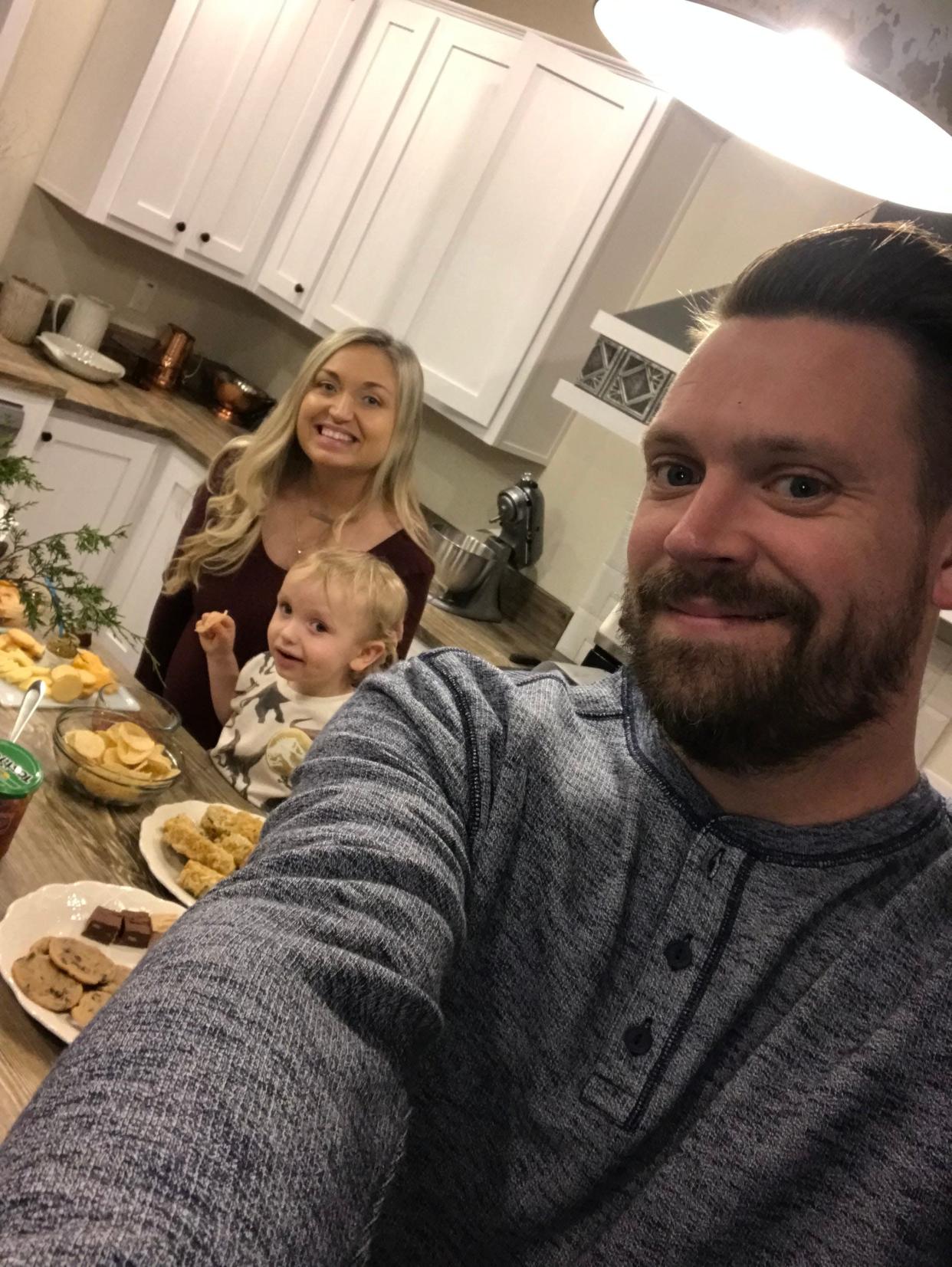 Cross, who lost her job in marketing during the pandemic, says she’s glad they didn't take on a huge loan for a traditional home.

“We definitely have the space that we needed and have all of the modern touches we wanted,” Cross says. “And of course, the price point was far better than what we were seeing in the market.”

Swapna Venugopal Ramaswamy is the housing and economy reporter for USA TODAY. Follow her on Twitter @SwapnaVenugopal