Matthew McConaughey is in Washington, D.C. discussing gun reform in the wake of the school shooting in his hometown of Uvalde, Texas.

The Dallas Buyers Club actor, 52, who called for “real leaders to step up and do what’s right” in an op-ed this week, was on Capitol Hill on Tuesday pressing lawmakers to take action to enact better gun laws after 19 students and two teachers were killed at Robb Elementary School last week. Shortly after, the Oscar winner, a gun owner himself, delivered remarks at the White House press briefing.

“This time, it seems that something is different,” McConaughey, who considered running for governor of Texas last year, began his emotional remarks at Tuesday’s White House press briefing. “There is a sense that perhaps there is a viable path forward. Responsible parties in this debate seem to at least be committed to sitting down and having a real conversation about a new and improved path forward. A path that can bring us closer together and make us safer as a country. A path that can actually get something done this time.”

McConaughey said he and his wife, Camila Alves, were in Washington meeting with lawmakers “on both sides of the aisle” to share stories about his hometown and what they learned last week meeting with the families of the victims.

“We came here to speak to them, to speak with them and to urge them to speak with each other,” he said of the politicians. “To remind and inspire them that the American people will continue to drive forward the mission of keeping our children safe. Because it’s more than our right to do so. It’s our responsibility to do so.”

The actor, who said he feels like “real change can happen,” after the tragedy shared memories of growing up in Uvalde — his mom, Kay, taught kindergarten less than a mile from Robb and he learned to “master” a BB gun in his hometown. He said after two years of training on his BB gun, he graduated to a 410 shotgun.

He said after learning of the shooting and going home to hug his three children, he and his family then went to Uvalde, where they spent the week on the ground. He said he arrived to a community in “shock” and in “pain” as well as “anger.”

They spent time learning about the victims by sharing “stories, tears and memories” with their families. In turn, he shared art, belongings and stories about the victims at the podium to “help keep their dreams alive.”

Perhaps the most gut-wrenching was the green Converse sneakers — which Alves held on her lap — belonging to 10-year-old shooting victim Maite Yuleana Rodriguez. 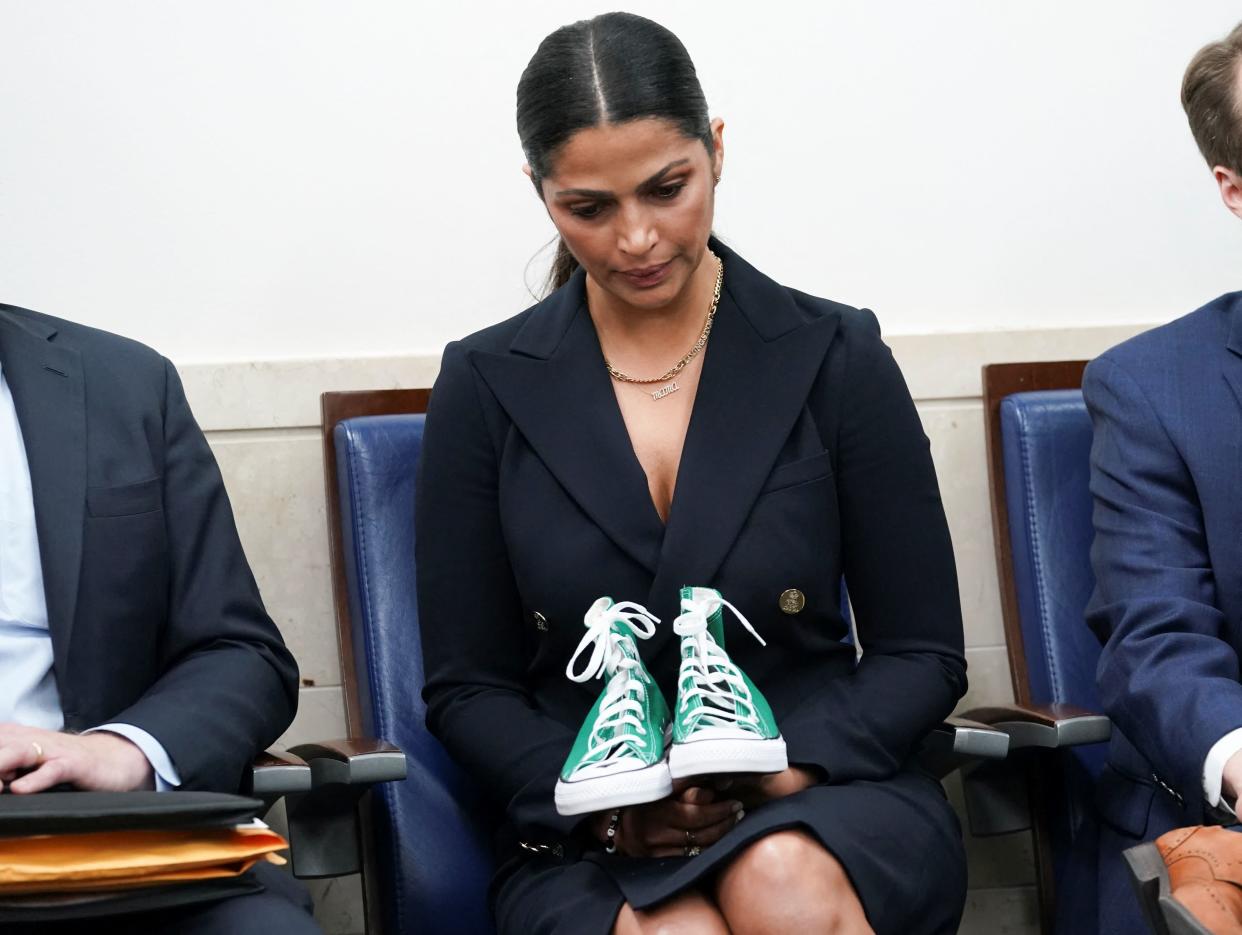 “[She] wore these every day,” he said of the child’s sneakers that she adorned with a heart. “These are the same green Converse on her feet that turned out to be the only clear evidence that could identify her after the shooting,” getting emotional delivering those words. He hit his hand on the podium. “How about that.”

He also spoke of meeting a cosmetologist specializing in mortuary makeup.

“These bodies were very different,” he said he learned. “They needed much more than makeup to be presentable. They needed extensive restoration. Why? Due to the exceptionally large exit wounds of an AR-15 rifle. Most of the bodies so mutilated that only DNA test … could identify [them]. Many children were left not only dead but hollow.”

He said we need to invest in better mental health care, have safer schools, restore family values, have less sensational media coverage and “responsible gun ownership,” ticking off a list including background checks, raising the minimum age to buy an AR-15 rifle to 21, waiting periods and red flag laws.

He said these things are not a cure-all (adding a “hell no”), but in our divided country gun responsibility is an issue people agree on more than they don’t.

“This should be a non-partisan issue,” he said. “There is not a Democratic or Republican value in one single act of these shooters, but people in power have failed to act.”

“Can both sides see beyond the political problem at hand and admit that we have a life-preservation problem on our hands?” he asked.

He added, “We can’t truly be leaders if we’re only living for re-election.”

Earlier in the day, McConaughey and Alves met with Sen. Chuck Grassley of Iowa.

Grassley tweeted that they spoke about “gun responsibility,” the topic of McConaughey’s op-ed, and “school safety.”

The day before, McConaughey and Alves met with Senate Majority Whip Dick Durbin of Illinois, who is also and chair of the Senate Judiciary Committee. He said they discussed “the horrific mass shooting at Robb Elementary as well as the larger problem of gun violence in America. We, like so many others, agree that gun safety reform is needed…”

In his op-ed Monday Austin-American Statesmen, McConaughey wrote, “I believe that responsible, law-abiding Americans have a Second Amendment right, enshrined by our founders, to bear arms. I also believe we have a cultural obligation to take steps toward slowing down the senseless killing of our children. The debate about gun control has delivered nothing but status quo. It’s time we talk about gun responsibility.”

Making it clear that “saving the unnecessary loss of lives is not a partisan issue,” he called for “real leaders to step up and do what’s right,” outlining four things that can “immediately reduce the gun violence tragedies that have become too common in our country.” The measures include: mandatory background checks for gun purchases, raising the age to buy assault rifles to 21, implementing a national waiting period to buy assault rifles and establishing Red Flag Laws.

McConaughey spent his young childhood in Uvalde. In the immediate aftermath of the shooting, he called for Americans to “do better.” The Austin resident visited Uvalde in the wake of the shooting with Republican Rep. Tony Gonzalez. He then brought his family — including son Levi, 13; daughter Vida, 12; and son Livingston, 9 — to the school to pay their respects to the victims.

McConaughey’s Just Keep Livin’ Foundation has a Uvalde fund and 100 percent of donations are being used for grief counseling, burial costs and other immediate and long-term needs of the community.

Last year, McConaughey toyed with a run for Texas governor, against incumbent Gov. Greg Abbott, a Republican. While early polls showed that Texans liked the idea, despite his political beliefs being largely vague, McConaughey announced in November that he decided against it, saying he feels he’s of more service supporting “entrepreneurs, businesses and foundations that I believe are leaders.”