Hours after the late Saturday outage, Energy Minister Omar Ayub said on Twitter that power was being restored in phases, starting with Islamabad. He said later on Sunday that power had been restored to much of the country. 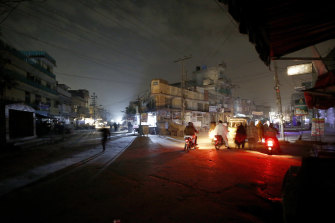 People are silhouetted on vehicles headlights on a dark street during widespread power outages in Rawalpindi, Pakistan, on Sunday, January 10.Credit:AP

The blackout was initially reported on social media by residents of major urban centers, including Karachi, Lahore, Islamabad and Multan. The minister and his spokesman then took to Twitter to update the country.

Ayub urged people to be patient. He said the cause of the cause of the power outage was being investigated and work was being done to fire up Pakistan's main Tarbela power station in the northwest, which would lead to a restoration of power in the rest of the country in phases.

Ayub said in a news conference on Sunday that the Guddu power plant in southern Sindh province developed a fault at 11.41pm that triggered the shutdown of other power plants in seconds.

Later, Zafar Yab, spokesman for the Ministry of Energy, said the Tarbela and Warsak plants, both in northwestern Khyber Pakhtunkhwa province, had come back online and power was being restored to the transmission system.

Yab said restoration of power to all areas of the country would take some time, however.